90 Day Fiance: Before the 90 Days Finale Recap – Goodbye for Now 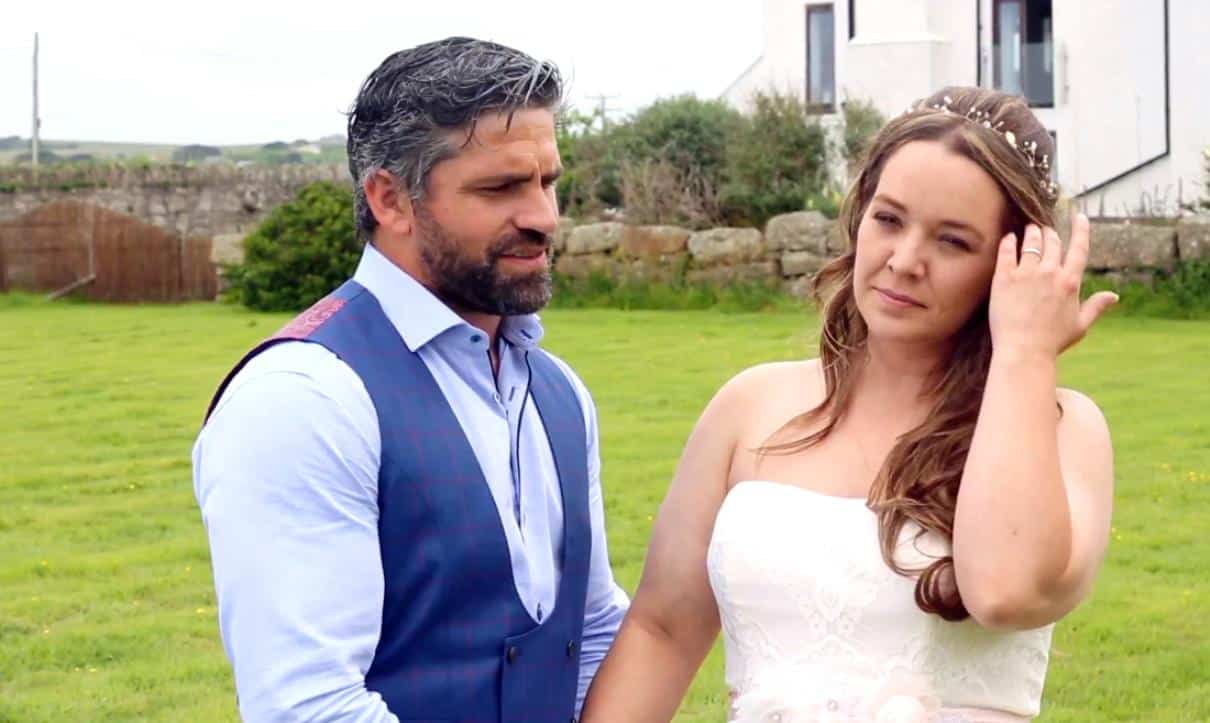 Ups, downs, goodbyes, and tears…these relationships are all experiencing some rocky times on this episode of 90 Day Fiancé, Before the 90 Days.

The wedding is just days away, but Rachel can’t shake her unsettled feeling. In case you forgot, Jon invited an ex girlfriend to their rehearsal dinner but it turns out that Rachel clearly isn’t THAT concerned, since the happy couple + Lucy head on out to pick out their wedding rings.

It’s the night before the wedding and things are a bit “tense” for the couple. They however pull it together and walk into the dinner. Luckily, the ex-girlfriend didn’t show up to the dinner and Rachel bonds with Jon’s cousin and his family. The family members tell Rachel that they can see a difference in Jon and everyone can tell that they are really and truly in love. 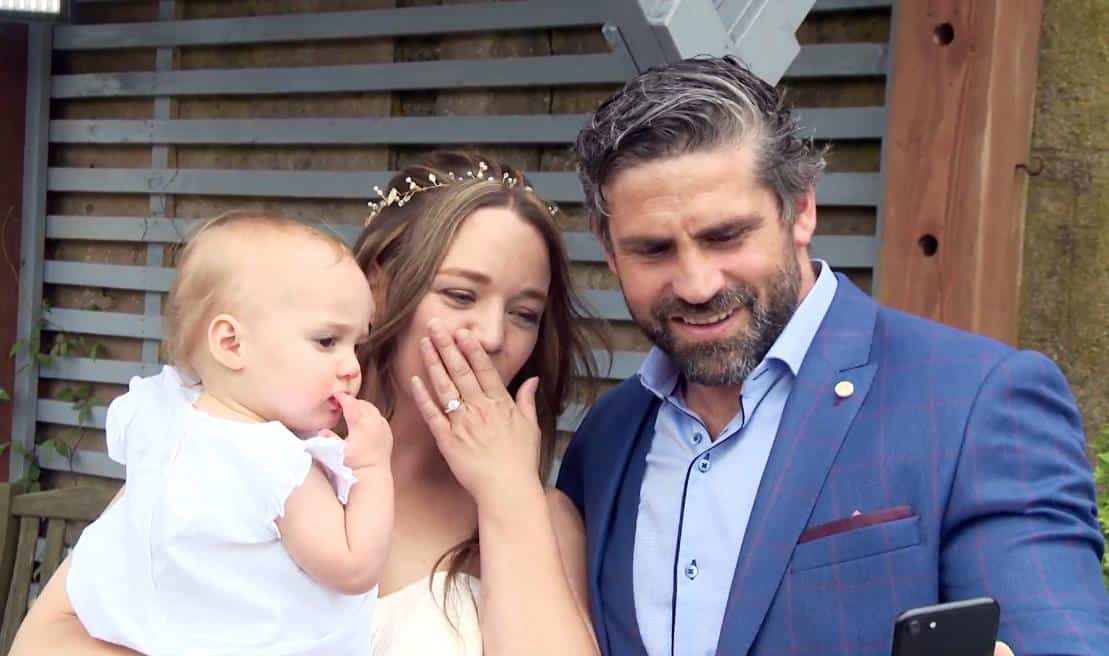 It’s wedding day! Jon preps and plays with Lucy while Rachel gets made into a bride. All two guests arrive for the nuptials (Jon’s mom and sister) and Rachel heads out with Lucy to marry the man of her dreams. Jon’s fam is FaceTiming with Rachel’s noticeably absent family, which is a nice touch. Jon gives some emo vows and it’s all very romantic and whimsy. The couple are husband and wife just like that and they exchange smooches. #Married! 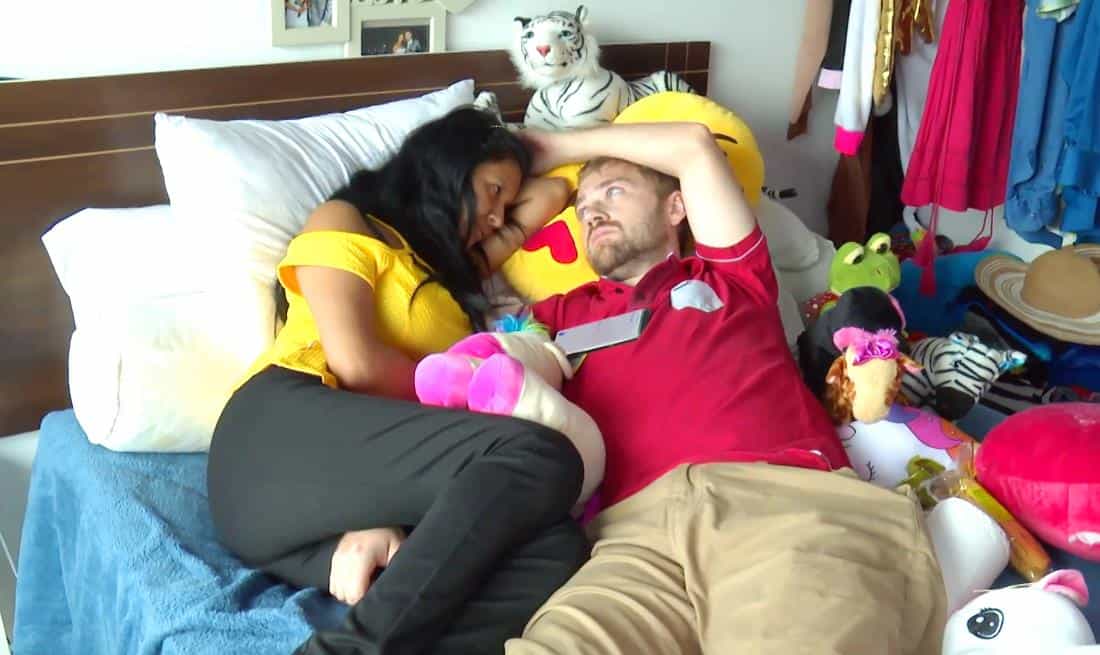 Paul tries to pick up the pieces after the heartbreaking surgery that Karine had to have because of the miscarriage. Poor Paul can’t be at the hospital with Karine since only one female family member can be with the patient, but luckily, Karine’s procedure went well and she was able to get released. Paul decorated their pad with flowers and showered Karine with the love and attention she so badly needs during her time of sadness. Karine explains that she needs so much support from Paul now, but there’s some more bad times coming Karine’s way.

Didn’t see this news coming…Paul has to go back to the USA because he “doesn’t have any more money.” Not here. Not now, Paul. Timing has not been Paul’s specialty, but this time, it’s almost cruel. I mean, it’s nobody’s fault that most of the remaining money Paul had went to Karine’s medical bills, but couldn’t he work something out?!

EW. WHY DID PAUL JUST SMELL THE CROTCH OF HIS UNDERWEAR TO MAKE SURE THEY WERE CLEAN? Where did this guy come from?! As he is busy packing to go home, Karine cries and Paul tries to make it clear that he is only gonna be gone for a month or two…just long enough to make some money to support Karine. Paul man-handles Karine and talks in the creepiest baby voice. Karine cannot understand his English and he makes the STRANGEST exit. He is off before Karine can even wrap her mind around the entire situation and Paul vows that he is going to “take the time to make it work.” He has to “fight to do everything” he can for their future andddd America-bound he goes. 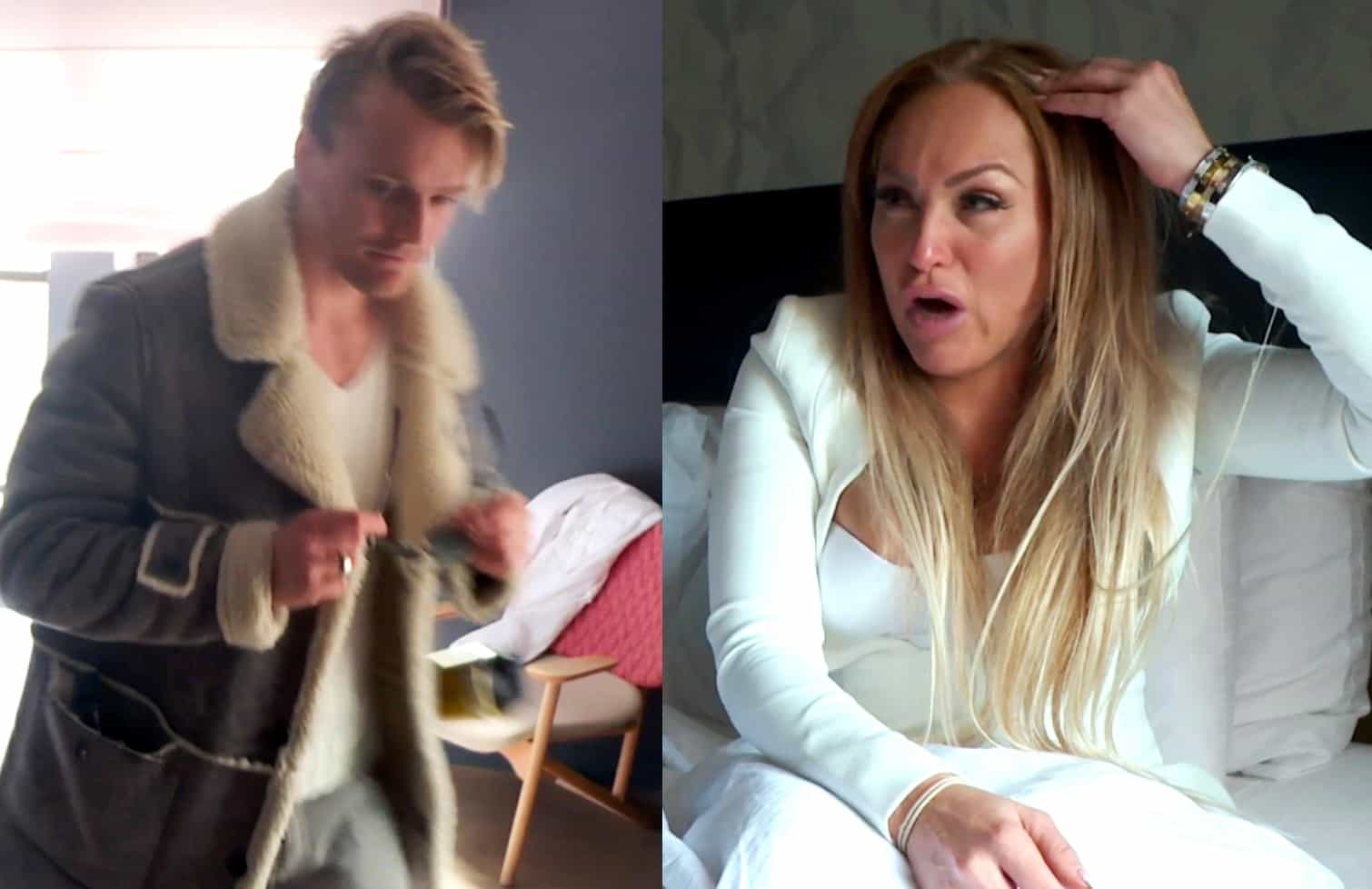 Post breakup, Darcey states that she needs to “like, breathe for a minute.” Things escalated quickly between the duo, especially since Jesse did not come here “in the name of love.” What reality does Darcey live in? How could she possibly think that their “relationship” is worth saving? Twenty minutes later, Jesse is casually smoking a cigar (WHY) and lets Darcey know that he is bringing her bags upstairs “out of love.” Ok. Now I see why Darcey is so confused about their status. I’M confused. One minute Jesse looks like he is gonna kill her and then the next minute he’s letting Darcey stay in his hotel room.

Darcey is dead set on Jesse not controlling the break up. I wouldn’t mess with her…I mean, a lady that can beat up her own twin sister is a wild card. Darcey marches into the hotel room and begins fighting with Jesse immediately. They go back and forth and Jesse brings up the shoe incident and states that this is all very “traumatic.” Jesse wishes “all the best” to Darcey and tells her that he “ain’t mad” at her, but I would have to say otherwise. Darcey claims she is done with him…over and over and over again and Jesse is just “walking away….” To another room in the same hotel. So much for a dramatic exit. Darcey ugly cries and her forehead’s not even moving due to the excessive Botox. It all looks very painful.

The next morning, Darcey means business in her Michael Jackson inspired attire. She tries to pull things together by painting on her pants and face, but the reality is, she is truly upset. Jesse, on the other hand, is very matter of fact about the situation and cold when discussing the future with Darcey. (Side note: I will say that Jesse’s scarf is everything! The man truly does love America.)

I love the disconnect between the late-night stories…someone is lying. Darcey states that she did get intimate with Jesse last night, BUT Jesse denies it vehemently. Hmmmm. Jesse says he feels like he “can breathe again” and doubts that he will miss her. He even goes as far as saying he will “pray for Darcey.” Darcey still wishes that things went different, but for now, she’s heading home…as a single lady. 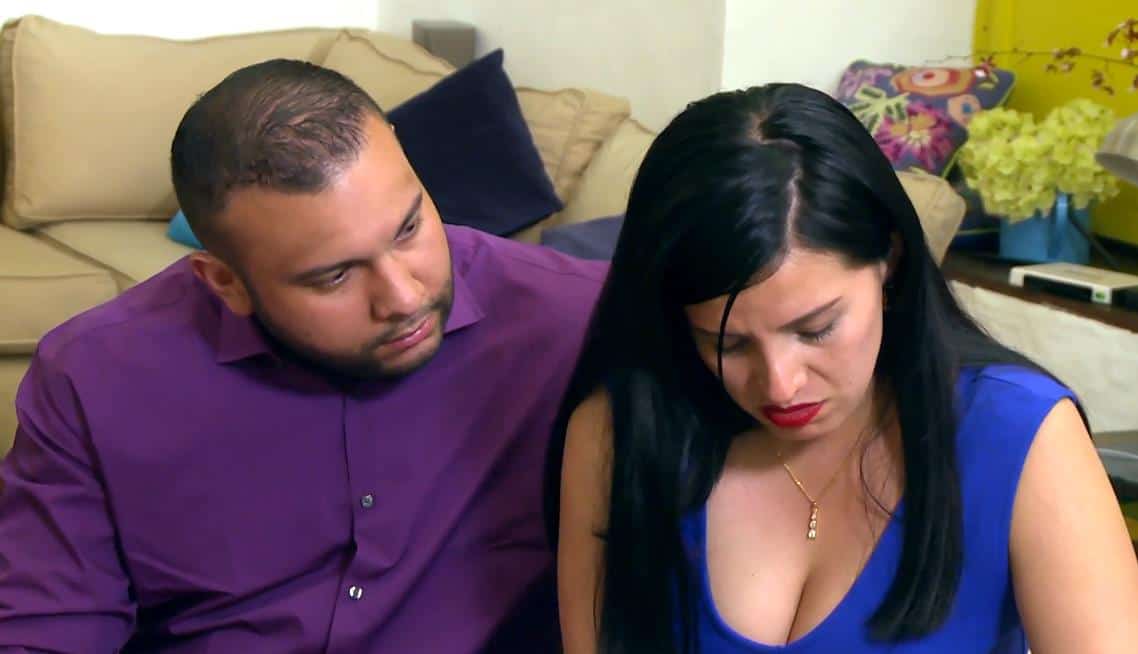 The newly engaged couple is all smiles and are already planning their life together forever. It all seems like rainbows and butterflies…until…Five hours later, Ximena receives a message from Ricky’s wife… Time to show some screen shots to Ricky. It appears as though Ricky told his soon to be ex that he wasn’t serious with Ximena because, according to him, he didn’t want to hurt her feelings. What a disaster. Ximena feels like everything Ricky says is a lie, cause it pretty much is…but after a little dramatic crying, Ximena has decided to give Ricky another chance AGAIN.

Ricky has to head back home and he’s dreading the goodbye he is about to have with his fiancé. Things haven’t been quite the same since Ximena tried to drown Ricky/she found out that he was talking to ex, but the couple decide to fight for their relationship. Ximena is standing her ground and being the realist in the situation. She tells Ricky, “I don’t think I can prepare anything until you get divorced.” Go, girl! I will say that she has no filter and it’s important for Ricky to know that she’s onto him and his slimy ways. At the airport, Ricky and Ximena embrace and it seems like all the drama is behind them for the time being. Ricky explains that he is gonna miss Melissa, I mean Ximena. Too soon? Ricky makes sure that the viewers know he is coming back to Ximena and that this is not over. 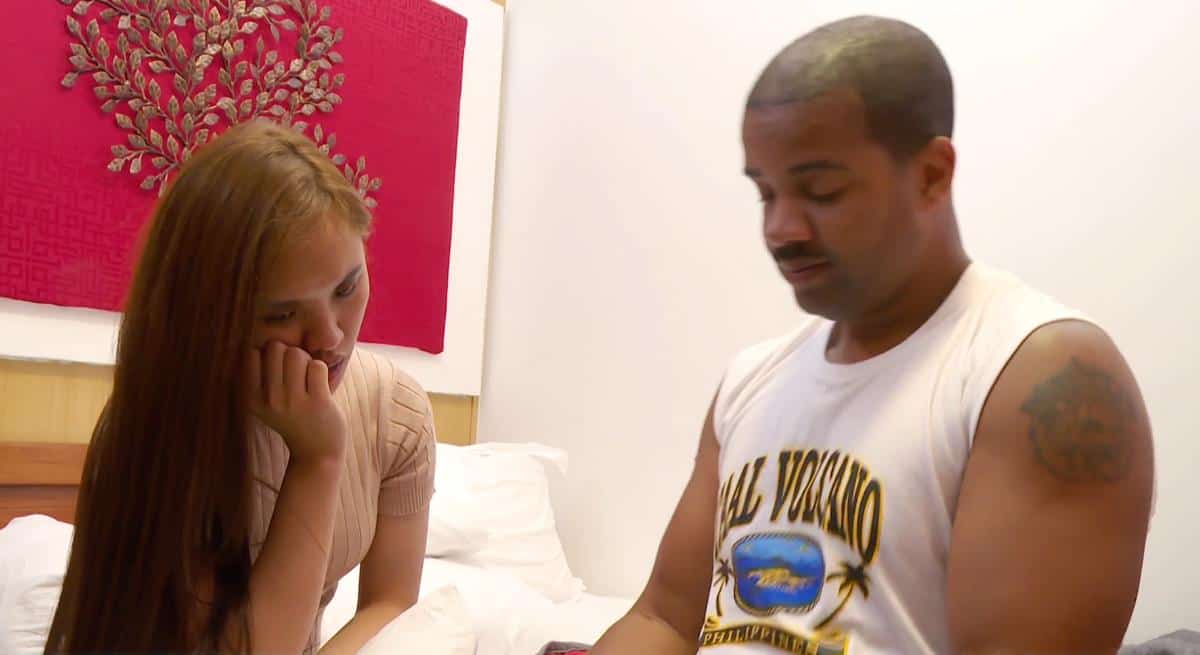 After proposing and saying YES, the couple is heading back to Manila to break the news to Tarik’s brother. Now remember, the last time Dean, Tarik’s brother, was in the picture, he went all Harriet the Spy on Hazel and called her out for what she is: a lady just trying to get a ticket to America. Upon hearing about the proposal, Dean remains relatively calm and observes Hazel’s “rock.” Dean explains that it ain’t worth fighting over and even goes as far as wishing the couple a big congratulations. Even though Dean appears kind to Tarik and Hazel, he still thinks this whole situation is a bit fishy. 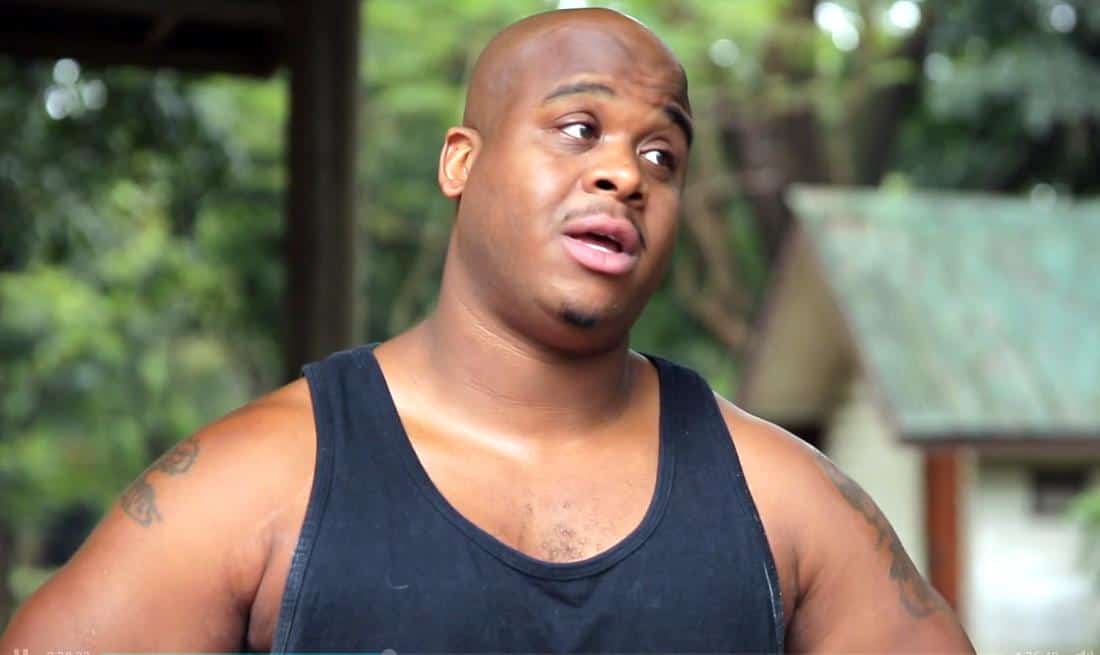 Back at the hotel, Tarik begins his emotional packing as he prepares to go back to the states. Meanwhile, when speaking to the producers, Hazel drops a bombshell. She tells them that when Tarik leaves, “I am homeless tomorrow.” Uh, what? The producers push Hazel to inform Tarik of her sad news, and you can see Tarik thinking “oh sh*t.” Tarik lets Hazel know that he feels “responsible” to take care of her and he hops on the internet and finds her a place to stay. And so it begins. What else could this girl be hiding??

It’s time for Tarik to go back to his “daddying,” but that doesn’t make the goodbye with Hazel any easier. Hazel looks like she can’t wait until Tarik gets on that plane, but sings his rap: “a brother wanna make you my round the way girl.” Leave it to the producers to ask the awkward questions…you know the ones about sexual chemistry. These two haven’t even done it yet! Tarik feels like he is “abandoning” Hazel, but Hazel is like “peace!” She def just wants to get back to her freshly paid-for-apartment… Hazel makes sure to say allllllll the right things to the producers and even allows a single tear to roll down her cheek once Tarik boards his plane. 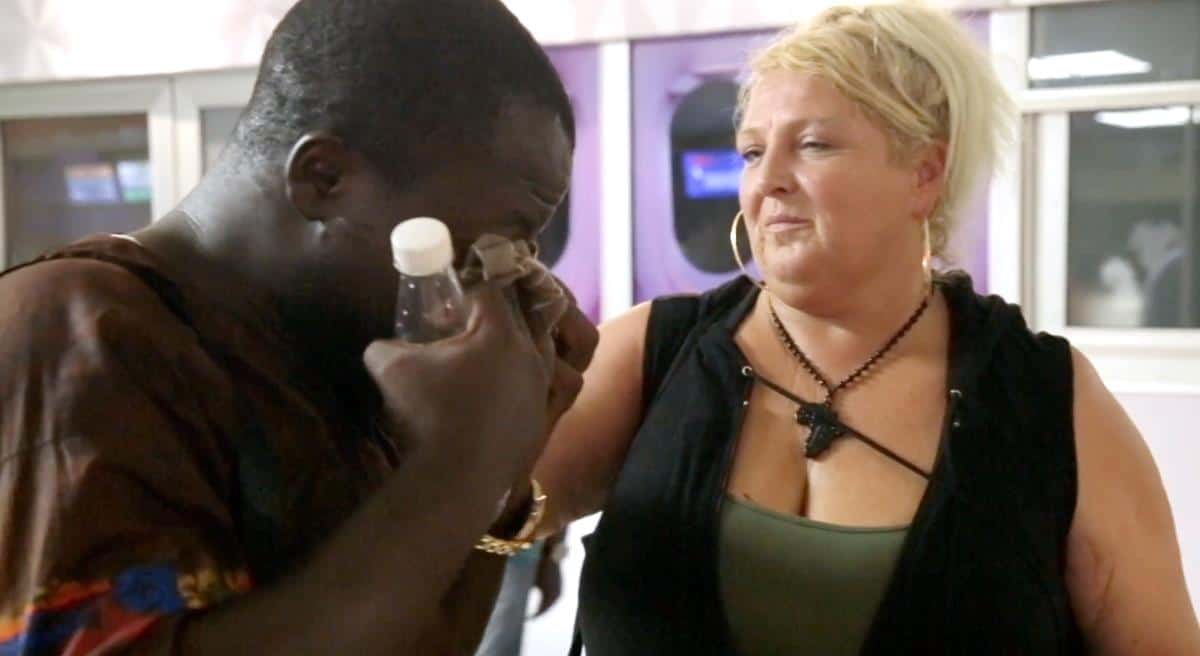 “Can I get a quickie before I go?” Oh Ang, you dog! Angela is sad to leave Michael, her fiancé, and she yells goodbye to everyone as they drive off from their love-shack hotel. Michael tells Angela, “You make me feel like a real man.” Angela explains that although they went through some rough patches during the trip, everything turned out okay for the couple. Now that they are on the next level, it’s time to work through all the legal details: K1 Visa, lawyers, etc. Angela smothers Michael with kisses at the airport and they say their goodbyes. This is it for Angela’s Nigerian adventure. They laugh. They cry. And Michael even attempts some humor when he reminds Angela to quit smoking, but alas, we all know that there is zero chance of that happening.

Angela has just landed in Georgia and she is P*SSED. Angela has $1.00 in her bank account and needs to talk to Michael immediately. Unable to reach Michael, Angela goes next level and gets in touch with the producers who are still in Nigeria. Luckily, they are with Michael and Angela reams him out over the phone. Turns out that Angela gave Michael her bank card because the Nigerian ATMs are a bit “confusing.” Interesting. Not surprisingly, Michael plays dumb. “You think I stole your money or what?” Angela straight up asks Michael if he took out $900.00 and Michael fumbles his words and tries, very unconvincingly, to tell Angela he would never do that to her. Angela is FURIOUS and rushes off to smoke…sorry, Michael. Poor Angela has no money in her back account and the future does not look bright for this duo. 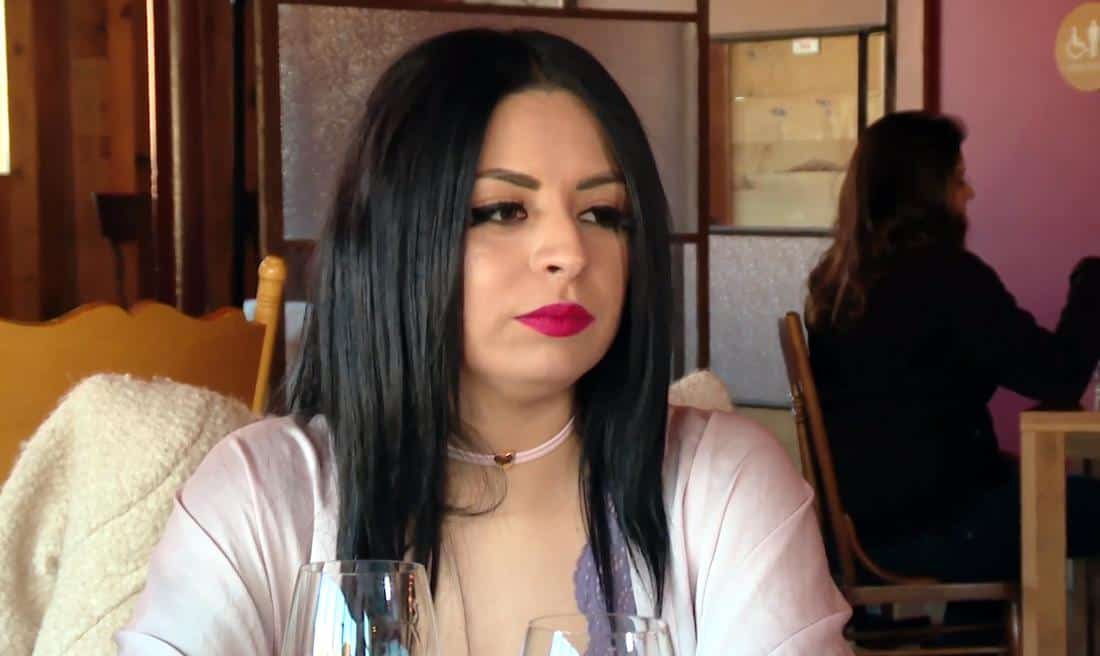 Snooze fest………….At least Marta’s dressed appropriately for the Wisconsin cold and a day time drink with her mom. Marta has decided to tell her mother about her news: she cannot go to Algeria because she couldn’t get her Visa. This isn’t some sort of woopsie on Marta’s part. In order to get a Visa for Algeria, Marta needed her boo to write a letter inviting her to come. Sounds easy enough…except, he never did it. Marta’s mom tries VERY hard to NOT say “I told you so,” but I feel like she should be screaming it from the rooftops. Duh, Marta. Why did you think that this guy was your prince charming?!

TELL US – THOUGHTS ON THE BEFORE THE 90 DAYS SEASON FINALE? IS HAZEL PLAYING TARIK? WILL JON & RACHEL LAST? ARE JESSE AND DARCEY REALLY DONE THIS TIME? DO YOU THINK MICHAEL STOLE ANGELA’S MONEY?