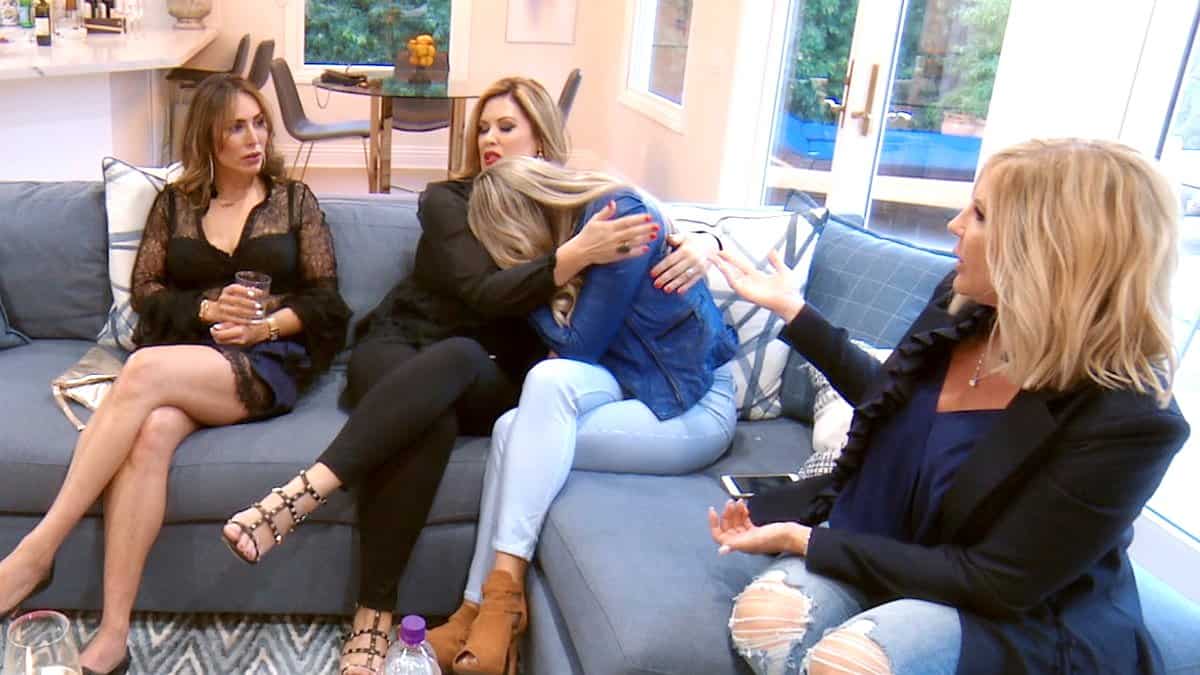 On this episode of the Real Housewives of Orange County, there’s one sarcastic husband, lotsa nosey ladies, and expensive bikinis. Just your average time with these women.

Emily’s training with Gina, Kelly is pilate-ing, and Shannon is getting caressed by her hottie trainer. One of these things is not like the other. Beats me how these women can fit in these training sessions right smack in the middle of the day…especially Emily, cuz ya know, she’s a top notch lawyer/party planner (no I will never let this go). Post fake working out, Emily and Gina sit down and chat over smoothies. They discuss the fun that ensued at Kelly’s love-shack during Shannon’s QVC debut, yet they can’t seem to understand Shannon. Emily says, “I texted her before she went on and she didn’t text me back” and Gina swears that Shannon STILL doesn’t even know who she is…which is hilarious.

Later on in the convo, Emily shares that she is going to meet with her fertility doctor. Her husband Shane does not want any more children, but Emily can’t seem to wrap her mind around “destroying” the leftover eggs. Seems to me Emily cares very little about Shane’s opinion… Gina also shares some news. She has decided that she would work out a routine with her soon-to-be-ex husband, Matt. The children will always stay in the house, but Matt and Gina would rotate out and stay in a rental home depending on the weekend. Yea. I am JUST as confused. Emily, wearing her lawyer hat, advises Gina this is a terrible idea, as she keeps “trying to do this limbo thing,” but Gina is not hearing it. She’s more concerned about other things…for instance, “Now I have to like be an adult by myself.” Gina explains that she has always been in a relationship, which is interesting considering she has the most annoying voice ever, so I can’t imagine how ANYONE could stick around for the long run.

Tamra lets Eddie know that she is gonna be heading over to Shan’s place for a celebratory party. He rolls his eyes and plops down. Eddie decides now is the time to check on his AFib and even though the guy hasn’t been doing much of anything (well, besides training clients…ain’t no thing), his test comes up as possible AFib. Eddie can’t win. This was supposed to be an easy 1-2 fix, but nothing seems to be working for him.

Because Shannon has decided to host a “I just launched a QVC line” party the day after returning home from Philly, she’s running around like a chicken without a head. I mean, this behavior is not abnormal for Shannon, but at least now she has an excuse for it. Tamra is the first to arrive at Shan’s pad and then Emily makes her entrance. She’s a real comedian these days and suggests she put on a name tag, just to be sure Shannon remembers her. I think she should do it for the viewers, too, since she is so unmemorable, but I digress.

Gina, in all of her loudness, makes her way in and the rest of the ladies do the same. Glad Kelly’s dressed appropriately for the occasion. Let’s hope that she’s going on a date after this….a date or a boudoir photo shoot. Where does one even purchase a blouse like that?!
While Gina desperately tries to become Shannon’s friend, Tamra suggests a “girls trip celebrate” Shannon. Man, this is the longest celebration for microwave food products ever! Vic interjects that perhaps they should go to the Caribbean and Emily takes the reins from there and offers up an idea: how bout Jamaica? Everyone’s immediately amped about the plan, especially Kelly. Her reasons are as follows: “Number one the food and number two the herb.”

As Shannon and Tamra fake set the table/make the food, Emily and Kelly have to watch Gina dissolve over her impending divorce. It seems as though Gina had planned a Caribbean vaca with Matt and it clearly never came to fruition. Instead of crying about her crumbling marriage, Gina is tearing up about her expensive bikinis that she was never able to wear. #Priorities. Eventually, everyone sits down to eat, Gina remains a little upset over Shannon “looking through” her, and I’m not looking forward to the ladies heading to a place where Shannon can do yet another terrible fake accent.

Kelly and Jolie head to the soup kitchen again and I have to admit that I do think it’s kinda cute that Jolie and Kelly help out. Jolie gets super emotional about the homeless children and for a minute, I see a softer side of Kelly…just for a minute. And then I remember that she’s Kelly Dodd and I’m back to reality. I mean, Kelly says things like, “Now that I’ve gotten divorced, I’ve realized there’s a lot of valuable lessons she’s missing out on…I’ve never taught my daughter to clean.” Insert eye roll.

New buddies Gina and Kelly meet up and start talking about their upcoming Jamaica adventure. Because Gina has no other storyline, she begins talking about Matt, again. Kelly listens as Gina explains the weirdness she has been feeling when it comes to Shannon, but tries to let Gina know that Shannon isn’t really that bad. Gina is trying to understand Shannon, but doesn’t think its fair that Shan gets to choose “how much time is the right amount of time” to wait to become friends with someone.

Emily, towering over her sarcastic hubby, takes him out to lunch. Shane acknowledges the fact that he needs a “booster seat” and I think that’s amazing. Emily lets Shane know she’s going to see the fertility doc, and ever the sweetheart, Shane tells Emily dryly to “say hi to him for me.” Ooph. “I don’t feel it’s really right you’re pushing me in that direction.” As much as I don’t like Shane, he does have a point. Perhaps this is a conversation they should have OFF camera…especially because Shane is known to be a bit snarky. When Emily says she always wanted to have another girl, he retorts that he “always wanted to be 6 feet tall, but that’s not gonna happen.” Ouch.

Warning: Vicki’s segment is gag worthy as she continues to be pushy and overbearing. What else is new? Vicki states, “We’re going on a family trip.” Ugh. Vicki’s son, Michael, has invited the whole gang over for some snacks and drinks…and by whole gang, I mean Steve, Vicki, Steve’s daughter, and Steve’s daughter’s boyfriend. It’s like the Brady Bunch! Leave it to Vicki to make things uncomfortable, fast. “Isn’t it weird that none of us are married and we still love our people?” Jeez, Vicki. Vicki is the most cringe worthy mother out there, especially when she starts talking about babies. So awkward. No wonder her kids stay far away from her.

Later, Em drags her mother-in-law in as she talks to the fertility doc and makes it clear that she wants another girl. The doctor seems a little worried about the fact that Emily is going over her husband’s head about this topic. He suggests that the couple be on the same page (duh) and even goes as far as recommending therapy. I’m sure Shane’s gonna LOVE that.

Kelly and Shannon, new besties, get together for some sh*t talking…I mean eats. Naturally, the convo steers in the direction of Gina. Kelly lets Shannon know that Gina thinks Shannon is “hard to get to know.” I sorta feel like Shannon’s being a bit of a mean girl, but I do enjoy the jabs at Emily. “I’m waiting for fun Emily. Is there a fun Emily? I’ve seen the killer!” LOL. Shannon states that she is “keeping her boundaries” when it comes to Emily, but we all know that she is never very good at zipping her lips…