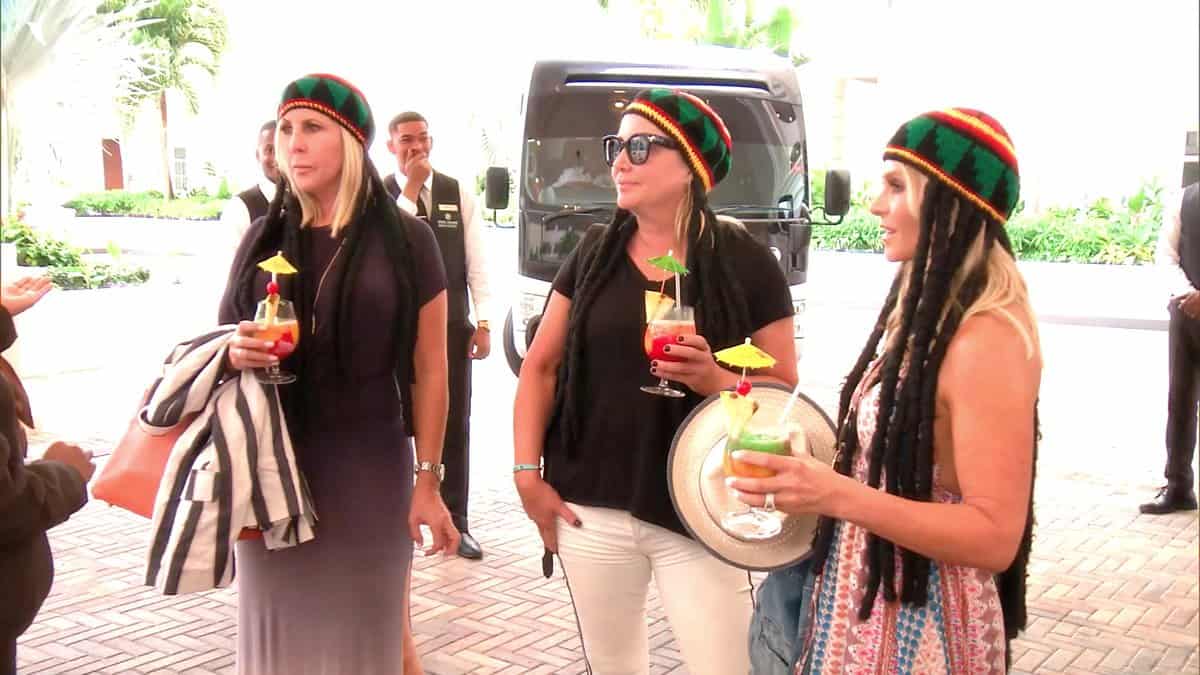 This is just what these ladies need…a “girls’ vaca.” On this episode of the Real Housewives of Orange County, let’s cross our fingers that no one breaks a bone and the clothes stay on (I’m talking to you, tres amigas…)

The women begin the arduous task of packing for their Jamaican get-away. Whilst packing, Gina’s children crawl into her suitcase and she says things like, “This is the naaaaoughty box.” Kelly is also having a tough time filling her luggage. “I swear to God, it’s like I have hooker clothes.” Well, that’s a pity, Kelly….since you’re traveling with the classiest ladies in all the land. Note the sarcasm. Despite any further packing hiccups, the ladies somehow manage to get themselves to LAX for 4:00 in the morning. Naturally, Shannon is moaning and groaning and Gina is yelling about “tan lines.” Sounds about right. Leave it to Shannon to find a phrase and stick with it. This time it’s, “Jamaica-mon.” God. Shannon’s already starting with her terrible accents. Once landed, the women are complaining about how hot it is as if they didn’t know where the plane they boarded was landing.

For the love of God, these ladies are so embarrassing. They rock Jamaican-dread caps and wonder why their cab driver is staring at them like the jerks they are. Already there is some rudeness within the group. Shannon only wants to room with her “Tres Amigas…round II.” And I am pleading that someone please separate these lunatics. Once inside the pent house, Vicki and Tamra fight for the king bed like middle-aged adult women usually do. They yells things like, “I’m gonna pee on it. I’m marking my territory.” Ew. How gross are Tamra and Vicki?! Licking pillows. Fake farting on them. All to claim a king bed. Puh-lease.

There seems to be an air conditioning issue in the pent houses and ya better believe the girls are complaining. It comes so naturally to them. Later in the evening, everyone is decked in their off the shoulder tops and age inappropriate ensembles- I’m talking to you, Vicki. The dining experience is underwhelming, that is until Shannon gets the news via text that her rental home is up for sale. The waterworks begin and then, wam-o…spotlight on Shan, again. Luckily, the drinks begin flowing and it doesn’t take long for Gina to talk more about her bizarro divorce situation. Gina shares that they’ve “done their paperwork together” and yet again, the women begin throwing out advice left and right.

Everyone’s starting to notice that Shannon is not even dialing into the convo and that Vicki is using this moment to promote Coto insurance. Speaking of Vicki, suddenly something weird is going on. Kelly says, “It’s like all her plastic surgery is malfunctioning at once.” WHAT is happening to Vicki?! She’s fuchsia and sweaty and she looks like a wax figure. To be honest, Vicki looks like a lunatic as the women are drenching her in cold water. The restaurant patrons are staring, the women are cackling, and Vicki’s just getting redder. Woof.

The next morning, the ladies split up. Kelly, Vicki, and Shan head to the spa and are the most obnoxious guests ever. If I hear Kelly talk about her “rash” one more time, I’m gonna lose it. Meanwhile, Emily, Gina, and Tamra sunbathe on the beach and rehash last night’s outing. The whole “Shannon doesn’t like anyone” topic continues to get beat to death and Tamra acts as the wise old sage when it comes to Shannon. Tamra explains that she “feels sorry for her…and bad for her” and talks about Shannon’s personality. For a bestie, Tamra is doing a whole lotta sh*t talking to Emily and Gina. Gina goes as far as calling her “sour Shannon.” Oh boy…

Post massages, of course Shannon has an issue: she forgot her bathing suit. So, essentially Shan winds up skinning dipping in the mineral pool. In the meantime, Gina, Tamra, and Emily are in “heaven…on the beach with a cocktail…no kids.” Yet, they cannot stop talking about Shannon and her issues. They need to find something else to focus on ASAP.

The idea of taking Gina on a rafting excursion when she is “terrified” of water sounds like a terrible plan. The girls pile into the van and poor David, the tour guide, is stuck dealing with these fools. I feel like I am watching 10 year old girls bicker as they choose who is going with who. Like, you are grown women who behave like kids. I wish Trishauna, the rafting guide and bartender, would just take over for the rest of this episode. At least she’s upbeat and smiling. The only one dishing out real talk is Kelly. “I just find it strange how co-dependent Shannon and Tamra are.” I never thought I would agree with Kelly about anything, but I am siding with her completely this time.

How crass are Vicki and Shannon? They talk far too long about farts and Vicki just goes on and on and on. This is the most unexciting boat ride ever. I mean, there are no waves, no crocodiles, and nothing to come knock Vicki off of her boat. At least Kelly and Tamra are making the most of the ride. They’re laughing and boozing while Vicki shrieks about her burning eyes. Enough of this lady.

Later, Emily is the first to Tarzan swing into the murky waters and she has proven that she is one “bad a*s b*tch.” The “fun crowd” swings on a rope and Shannon and Vicki plop down at the bar and talk about allergic reactions. How riveting. And then Vicki proceeds to tell the bartender her entire love-life story. I’m talking her ENTIRE story. Vicki claims that she’s a “little insecure,” and Trishauna (everyone’s favorite bartender) gives some good advice that we all know Vicki will not follow. Eventually, Emily and Gina join in on the “fun” with Shannon and Vicki. The conversation shuts down as Shannon gives the cold shoulder to the ladies. It seems like Tamra is dead set on shaking Shannon up. Shannon, seeing that she no longer has 100% control over Tamra, is clinging to Vicki for her dear life. Tamra states that she is just getting “so frustrated” that she’s “gonna blow” up on Shannon. That would be a fight I would like to see.