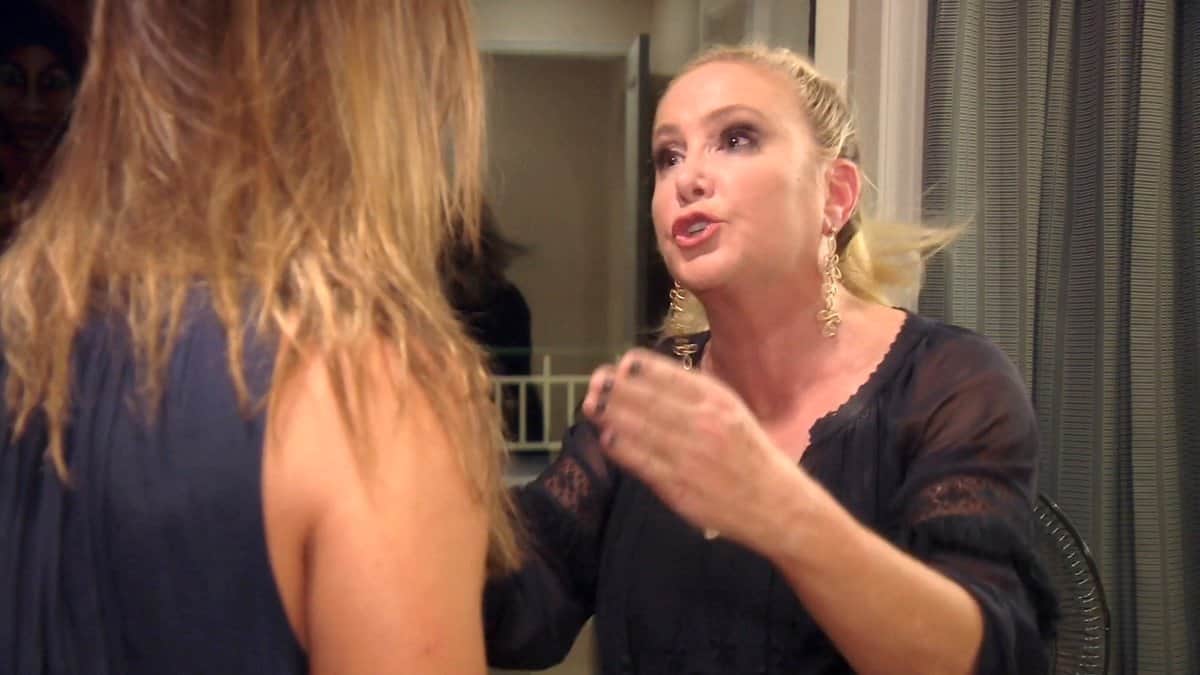 Jamaica- Night 2. Mixing booze, heat, and unresolved issues leads to some serious drama on this episode of The Real Housewives of Orange County.

The penthouses are bumping and the air is still not working. These women are sweating, complaining and drinking like fish. Vicki and Shannon are holding up the show-what else is new- and the rest of the posse decide to head to the restaurant without them. I can only imagine how angry the “dos amigas” are gonna be when they realize everyone bounced. Evidently, Shannon and Vicki are not very upset due to the fact that they are absolutely tanked. Nothing is worse than a drunk Shannon, especially when she’s trying to be “fun Shannon.”

Eventually, all of the housewives make it to the restaurant and the women place their dinner orders while Vicki cakes on more makeup. So classy. The conversation turns silly as Kelly tries to help the other ladies pick up men. She’s full of one liners like, “Is that a mirror in your pocket cuz I can see myself in your pants,” but not everyone is finding her humor funny. And by everyone, I mean Shannon. “So riveting…so riveting.” Typical Shannon. The spotlight is not on her, so she is tuning out.

Someone asks if they will be visited by “fun Shannon” tonight, to which Shannon retorts, “When is Shannon really not fun?” (Um, does she want me to list all of the times…?) Somehow this escalades and thus begins the whole “why doesn’t Shannon like Gina” fight………again. Gina reiterates how she just wants Shannon to be nice to her, Shannon shrieks how she has a lot of “new” going on, and to that Gina boldly suggests, “Let’s get new together.” Touché.

Emily  jumps in (because otherwise we would forget about her again) and she reminds Gina that Shannon “has no time for you.” Shannon immediately becomes defensive. These women are so petty that they decide it would be great to drag Tamra into this fight, too. Gina reminds Shan that Tamra is currently unhappy with her friendship with Shannon and Shannon stares open-mouthed. “Tamra will tell you right now I am a very good friend to her.” The ladies egg Tamra on and want her to divulge the truth. And that’s what Tamra does. Except it ends badly with Shannon. Very badly.

Shannon excuses herself and heads to the restroom. Naturally, Tamra goes to check on her. Shannon continues to meltdown and I am very proud of Tamra for saying, “everybody has sh*t on their plate.” Shannon’s pity party has reached a new level and Tamra does her best to try and talk her off of the ledge. Vicki makes a lame attempt to help, but only says dumb things like, “They should all visit me in Switzerland cuz that’s where I’m at.” Shut up, Vicki.
Before hopping on the bus to head back to the hotel, Kelly lets Shannon know that Tamra is still not over the whole “she doesn’t ask me about my life” fight. Oh boy. Shannon unleashes when she gets on the bus. “Apparently Kelly told me today that I haven’t been a good friend.”

Upon returning back to the hotel, Shannon flips out further. She demands that the producers stop following her and shouts, “I feel blindsided and I need a minute and I deserve it.” Tamra stalks after Shannon and the women proceed to have a screaming match. Tourists are staring. Mics are being removed. It’s a real disaster. When Tamra finally had enough, she heads back to the other ladies and lets them know the deal: “She can’t keep treating people badly because she’s getting a divorce.” Boom. The girls decide it would be a good idea to throw back a few shots at the bar whilst discussing Shannon’s “rich girl problems.”

Once Gina and Emily retire up to bed, Vicki, Tamra, and Kelly decide that Shannon should get on some meds cuz she is depressed. Who knew these chicks are now doctors?! They bash Shan left and right. Kelly goes as far as saying, “David must’ve been kind of a saint to have to deal with that day in and day out. It’s gotta be draining.” WOAH, Kelly. Look at you.

After a bit, Kelly, Vicki, and Tamra head up to the penthouse and confront a maniacal Shannon. The background Jaws music playing as Shannon unravels is amazing. It appears as though no one can get through to Shannon as she is hooting, hollering, and attacking Vicki. Shannon threatens Vicki by saying, “you wanna go there Vicki?” I’m not quite sure where she is going with this and I am not entirely sure Shannon knows where she is going either. Vicki and Shannon should just take out their rolodexes and go tit for tat, season by season, at this point.

Kelly tries to calm Shannon down, but fails miserably. The thing Shannon tends to forget is that all of the women currently in the room with her ARE DIVORCED. This is utterly embarrassing to watch and I actually feel bad for Kelly. Tamra explains that this has been “months of build-up” and Shannon wants to “b*tch and complain all the time and not fix anything.” Shannon shrieks, “Tamra stop acting like I’m some kind of mental case.” Um. Shan? The behavior your exhibiting seems like you could use some meds, ASAP.

The next morning (in the new AIR CONDITIONED villas), Tamra and Vicki pow-wow and go over the previous night’s events. The ladies cannot get over Shannon’s behavior and no one is looking forward to hanging out together. According to Vicki, “there’s nothing worse than feeling abandoned,” but Shannon is not answering the phone. No one knows where Shannon is or what she is thinking, so they decide to head out without her to take on the day’s adventures. Leave Shannon a casserole…that should be sufficient.

The girls (sans Shannon) are off to bobsled through the rain forest. It. Is. Amazing. Did anyone else notice that their faces did not move at all as they were tossed and turned? The women reconvene in the gift shop where Vicki decides to be a “great friend” and get Shan a little something. She picks out a shirt and yells, “She’s an extra large for her tummy.” Vicki! How rude!

After buying some cheesy memorabilia, the girls sit down to have some lunch. Vicki won’t stop talking about twerking in her “V-Lo” outfit and she harasses everyone to drink, drink, drink! Tamra momentarily forgot about Shannon and it took but a minute for the convo to turn back to the “Shannon show.” Vicki spills that the night before Shannon was “pouring a glass of vodka” and that it appears as though that’s her pain medicine. The ladies address her problems, yet again…but it doesn’t seem like Shannon really wants their help.

TELL US – THOUGHTS ON THE LATEST RHOC EPISODE? IS TAMRA A BAD FRIEND OR IS SHANNON TOO NEEDY?