The Real Housewives of Orange County Recap: The Day After Shannon’s Breakdown 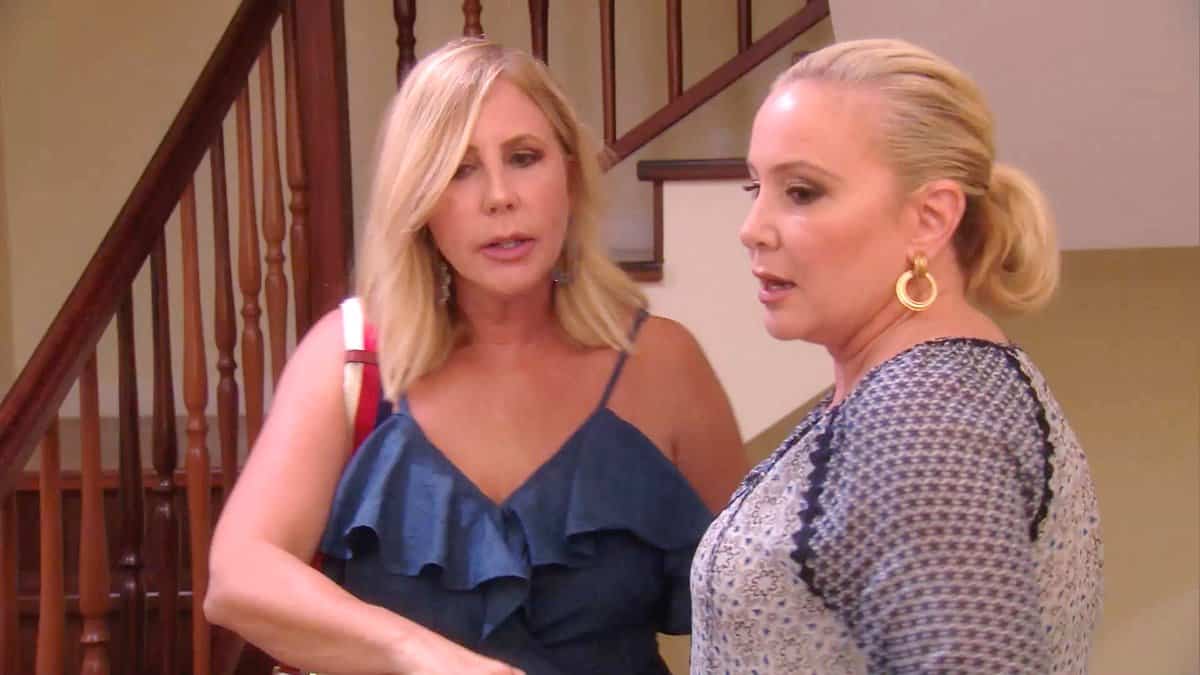 Where IS Shannon? Will the ladies stay sober for an entire episode? What will they fight about now? Will the explosive fight with Shannon ever come to an end? Hoping for some answers on this episode of the Real Housewives of Orange County…

In case you forgot, the last episode involved a huge blow out with Shannon while the other women judged her vodka consumption. Shannon is not answering anyone’s calls or texts and it seems as if she has dropped off the face of Jamaica. While discussing the Shannon issues, the women get this novel idea to stop talking about her (what a concept!) and start enjoying their vacation! They get ready for the waterfall adventure awaiting them!

So glad  Kelly dressed appropriately for the Dunn River Falls outing. One false move and one of the twins may pop out. I’m sure Tamra will get jealous and the next thing you know, it’s a topless convention. Luckily, Tamra decides to sit this one out while the rest of the women “slowly” make their way up a waterfall.

Vicki is shrieking and falling, Gina looks like she’s going surfing, and Emily nearly drowns. All in all, it’s a pretty entertaining segment. Eventually, they make it to the top after lots of sloppy spills and they head back to the hotel for dinner. They feign some sort of concern about Shannon and don Red Stripe baseball hats because that’s their new favorite drink of choice. Vicki decides to call looking for Shannon, but of course Shan does not answer. Vicki claims she “doesn’t like this feeling. It makes her uneasy,” but Kelly shuts down any of Vicki’s fears.

Shannon FINALLY answers Vicki’s persistent phone calls and states that she “felt blind-sided last night.” Vicki invites Shannon to dinner and Shannon asks for Vicki to “come get her” at her villa. Same Shannon, different day. I hope everyone’s had a few thousand Red Stripes cuz this is def gonna turn into a sh*t show. Pre dinner, Vicki meets Shan in her villa and Shannon explains that she’s “hurt.” Vicki and Shannon go back and forth fighting about who was meaner to who, so clearly this is going well. You know you’re really wilin out when VICKI tells you, “let’s dial it down.” HA.

SOMEHOW Vicki gets Shannon to show up to dinner where the rest of the women await her arrival. Naturally Kelly comes in hot. Kelly jumps right in saying that it was “hurtful” and she was “worried about Shannon.” I am happy to see that someone called Shannon out, but it is evident that these women are handling her with kid gloves mainly cuz she is nutso. Shannon opens up and explains that she “needed time” to clear her mind and sort out her emotions. I can’t believe that Shannon admitted to Gina that she was essentially “jealous” of her divorce situation. Gina’s still attracted to her soon-to-be-ex-hubby and their divorce path seems to be relatively easy for her.

Gina claims, “I’m not saying it’s not hard. It’s a transition. I just wanna be respected for it.” I’m not entirely sure what Gina is talking about, but I’m happy to see the ladies console her during her confusion. Everyone seems pleased with this Shannon outcome. Everyone except Tamra. She’s still waiting for her apology from Shannon…

The next morning, Shannon realizes that she needs to make things better with Tamra. She states, “I’m reaching out to Tamra because I am a communicator.” Ah yes. Is that what you call that behavior two nights earlier, Shannon? “Communicating?” Nonetheless, Shan heads over to Tamra’s villa and the ladies sit down to hash it out. Yet again this season. Shannon kicks it off by saying, “I’m still reeling from the other night at dinner” because it’s Shannon’s world and we are just living in it, ya’ll. Tamra shuts her down ASAP. She explains that Shannon’s negative behavior is becoming exhausting and that she is tired of it.

In the meantime, Emily, Gina, and Kelly try to figure out what exactly is “wrong” with Shannon. Emily, still trying to find a way into this season, starts discussing her mother’s depression and explains that Shannon’s behavior is similar to her mother’s. Now this lady is a doctor?! A lawyer, party planner, AND doctor?! Meanwhile….Tamra doesn’t quit. “You’re not gonna talk to me like that ever.” Touché, Tamra. Shannon seems almost robotic in this conversation and says the ultimate passive aggressive statement to Tamra: “I’m sorry you feel that way.” Tamra isn’t letting up and neither is Shannon. Watching these two is like watching a tennis match…I’m trying to follow this bickering but, like Shannon’s behavior, it’s becoming tiresome. After much ado, Shannon apologizes. PRAISE BE. Tamra “loves Shannon” and states that “tough love” may be the only way to keep this friendship afloat. The ladies hug it out and join the rest of the posse in the bus.

Off they go to Doctor’s Cave, a beach known for the water’s healing powers. All I know is that they all better bathe head to toe in that water cuz there’s a lot of healing that needs to be done with that group. Emily and Gina break off on their own while the rest of the girls kiss Shannon’s a*s and hang out on the beach. While chatting, Gina’s mom calls up to check on Gina and Emily gets a chance to “meet” her via telephone. This call prompts Emily to become emotional. Emily is a “little jealous” and she “wants to be able to call her mom,” but instead promises to be the best mother she can be for her daughter, Annabelle. It’s a nice moment seeing Emily and Gina bond and to be honest, I’d much rather watch that than watch Vicki suck out of a booze-filled coconut.

Gina and Emily meet up with the rest of the crew and Gina manages to get Tamra alone out in the water. Gina wants to know all of the details regarding the Shannon make-up and Tamra gives her a quick run-down. The “young ones” head over to the water trampoline while Tamra, Shannon, and Vicki get pedis by a man on the beach demanding that Vicki “shake her booty.” Thankfully, she denies him of his request.

Seems like for once, everyone is getting along. They sit down for the “last supper” and toast away the problems. Vicki is like your old aunt at holiday functions asking each lady what their favorite part of the vacation was. It’s hilarious to watch them all play along with Vicki as they reminisce about the “good times.” Tamra states, “I think the entire trip was amazing” (Was she on the same trip?) and further explains that her friendship with Shannon has become stronger since their fight. I can’t keep up with these two! And then, Gina and Shannon smooch and Vicki twerks. It’s a disturbing end to a disturbing trip, but hey, I wouldn’t expect anything less from this group of ladies…