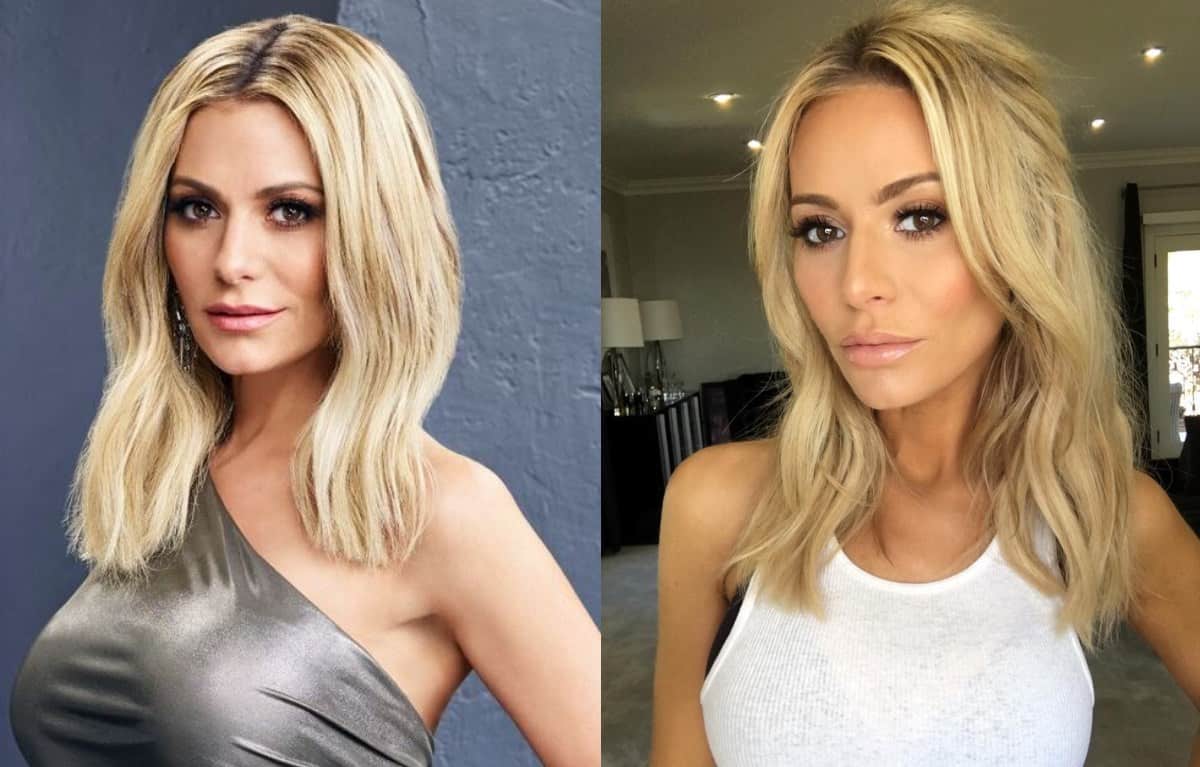 On Thursday (November 1), Dorit, 42, took to her Instagram page to share a new photo in which she looks quite remarkably different from what she normally looks like.

And right away, her fans and followers took notice with the majority of them telling her she looks just like another Bravolebrity – Kate Chastain of Bravo’s Below Deck!

“Is this Kate Chastain?” wrote one fan.

“You look just like Kate Chastain from @belowdeckbravo,” another follower added. 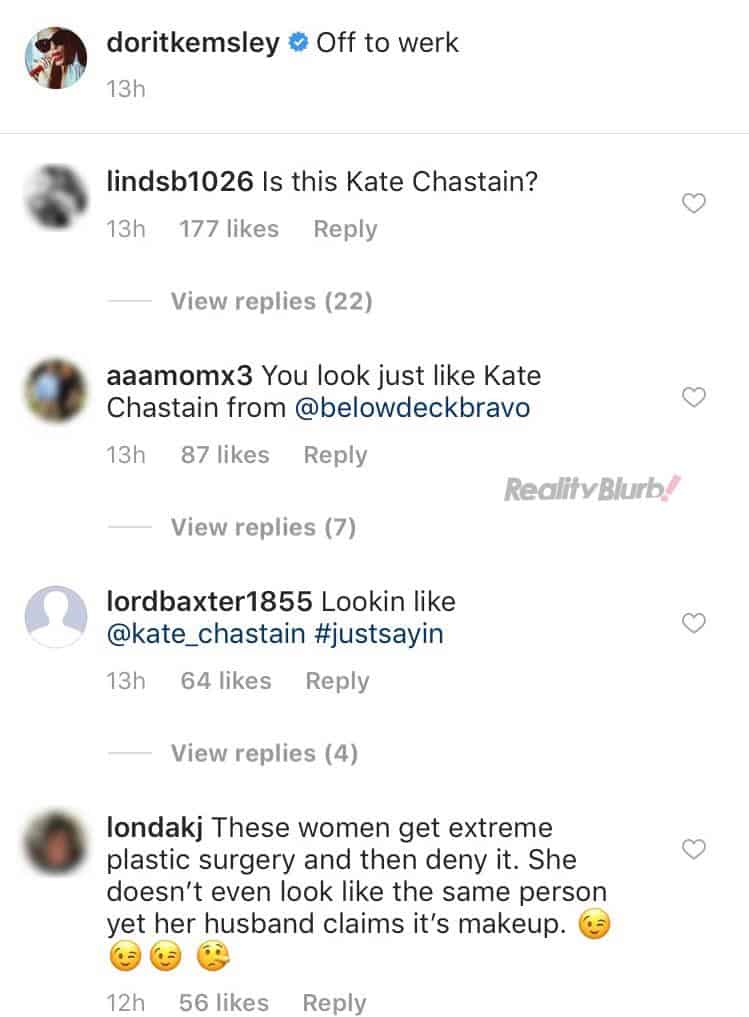 Below is a video of Kate.

Can’t decide if posting this on social media is meta or hypocritical or both. Either way I’m pretty sure Darwin wouldn’t have spent much time on Snapchat. New #BelowDeck tonight at 9 on @bravotv

And those kinds of comments were repeated all throughout her comments section. 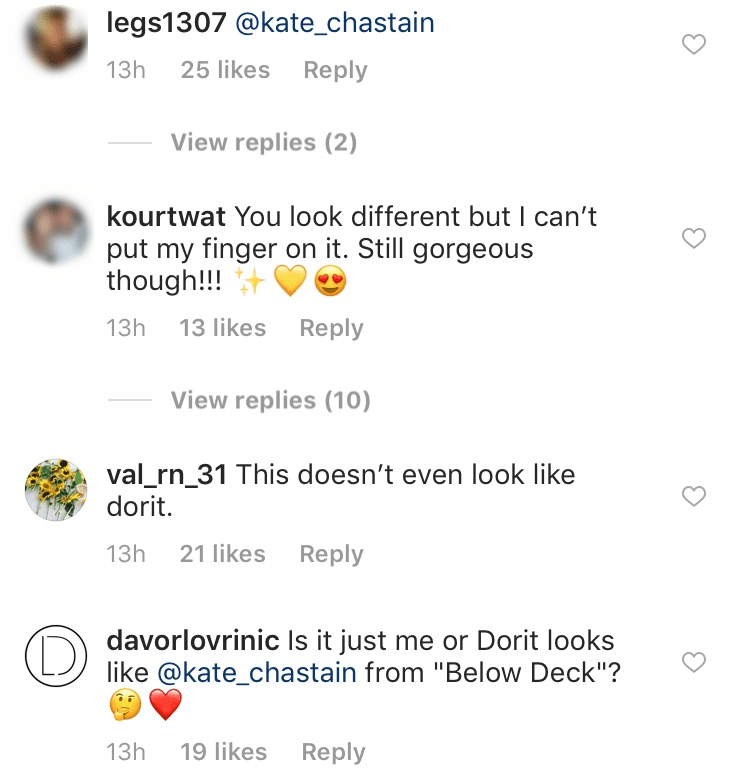 Another fan also called her out on denying she got work done.  “These women get extreme plastic surgery and then deny it. She doesn’t even look like the same person yet her husband claims it’s makeup,” that person wrote.

Indeed, Dorit’s husband Paul ‘PK’ Kemsley denied a few months ago that his wife went under the knife, claiming makeup is the reason she looks different.

Dorit’s makeup artist is also denying she had plastic surgery, crediting makeup for how she looks.

In another post shared by Dorit earlier this week, Samuel defended her as fans accused her of morphing into Kim Kardashian. “She is a Kardashian… do you think they all go to the doctor and ask for a certain look?” asked one curious fan.

“I’m the Doctor lol. When I glam I try to make the face look symmetrical and I do that by contouring certain areas,” wrote Samuel. “Now if the lip shape is small you enhance it by over lining the lips and using Light & Dark shades of lipsticks and liners to contour the lips (like i did above) This gives the illusion of full pouty. It’s all MAKEUP TRICKS :).” 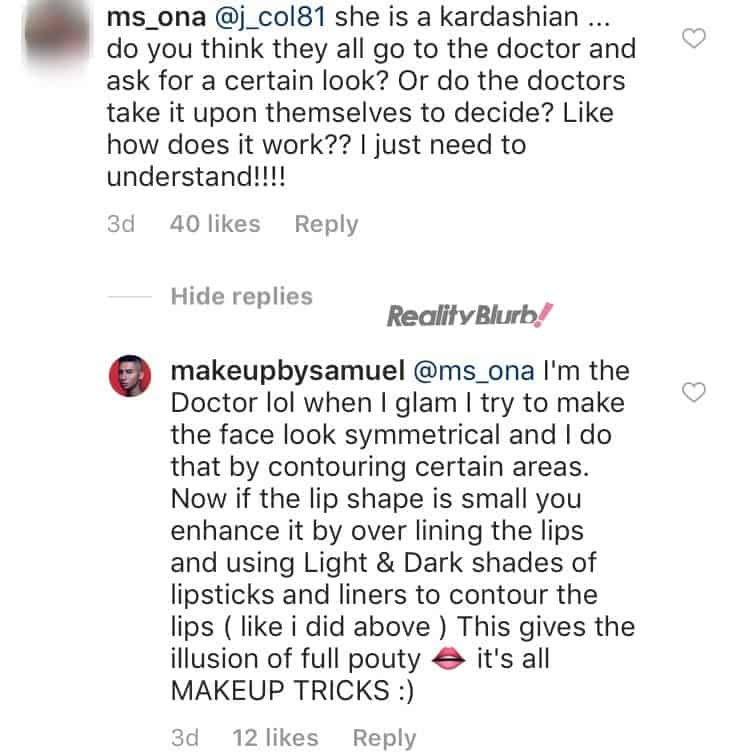 Well, if anything, Samuel, in addition to being a good makeup artist, also appears to be quite loyal!

It is possible that Dorit didn’t undergo any major plastic surgery (although she appears to have previously had a nose job) but it definitely looks like she has gotten some fillers in recent months and possible lip injections.