Home Featured Posts The Real Housewives of Orange County: Gina Steps In It

The Real Housewives of Orange County: Gina Steps In It 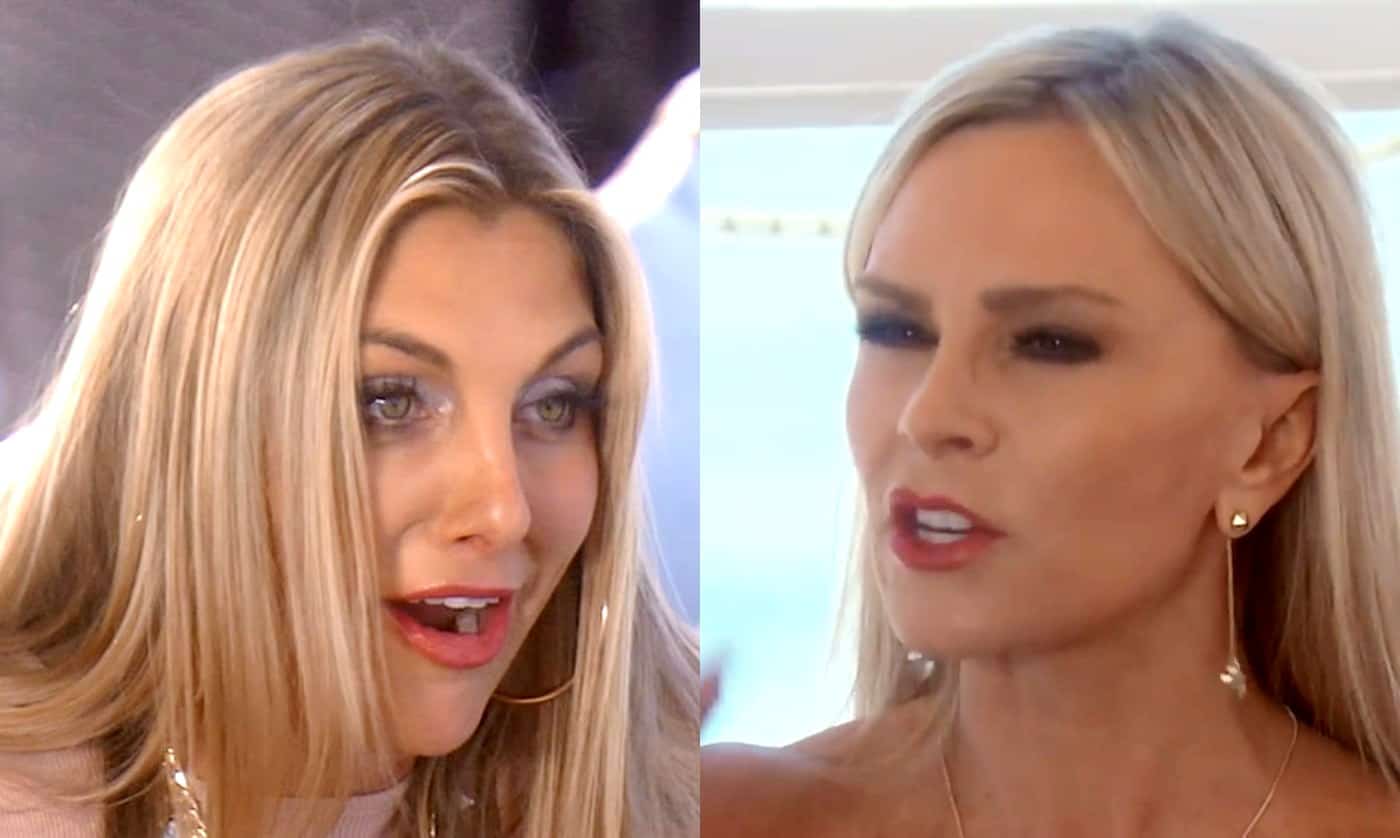 The ladies are back from vacation, but they haven’t left all of their issues in Jamaica. On this episode of The Real Housewives of Orange County, emotions run high as they work through lifts, tucks, and fights.

In Vicki’s backyard, Steve, her boyfriend, is hard at work. He is dust-bustering the outdoor furniture!! Man, he is a strange one. I guess if he is bizarre enough to date Vicki, this is nothing. Vicki gives him a canned version of the Jamaican trip and Steve half-listens. Vicki states, “I wasn’t even drunk or drinking. I didn’t over serve myself at all!” Ah, right. So what she’s saying is she twerks sober…? I don’t even wanna know. Vicki begins to explain her upcoming surgery to an unhappy Steve. Vicki will be having a lower face and neck lift and to that Steve says, “That ends all of that stuff. No more. That’s it.” Vicki claims that she’s “insecure” and that is evident upon seeing the absolutely terrifying evolution of Vicki over the years. I had to re-wind it because I could barely believe my eyes. She’s like a chameleon!

Over at casa Tamra, Eddie delivers his bride some nuts and berries for lunch and pretends to listen as Tamra continues to discuss the trip. Eddie claims that Shannon “sucks you dry” and that Tamra “enables” Shannon. Tamra vents and questions if she is even a good friend. Eddie advises Tamra to keep the whole situation between her and Shannon only and then he starts talking about real issues. You know…like his heart.

This segment with Emily is terribly upsetting. Emily and Shane head to a therapist where Emily opens up about her multiple miscarriages. She claims that Shane was “stoic” and he stares off into oblivion as Emily talks. Shane states, “I have no interest in having more children. Whatever I say I look heartless.” An emotional Emily states that her “sense of loss is just with” her and then she proceeds to talk about the loss of her 4 month old twins. It is heartbreaking. The hospital made Emily and Shane a box full of the twins’ belongings when they died. I just wish Shane would reach over and hug his wife, but it doesn’t seem likely.

In the meantime, it’s the big surgery day for two of the three amigas. Vicki heads into surgery for “just a little tuck, tuck” and Steve looks beyond over Vicki at this point. Happening almost simultaneously, Shannon rolls up for her “eyelid surgery” to help make her look “a little bit younger.” Seems like an odd surgery to have but evidently, according to Kelly, “pulling this, and lifting this, leads to this.” And you all know what “this” means. Kelly is there for moral support, but leaves right before Shannon heads in for the old eyelid lift. Post surgery, Shannon looks like hell, but she’s a trooper. …Unlike the other troll undergoing copious amounts of surgery. Five hours later, Vicki emerges from surgery wrapped like a mummy. When Steve goes in to check on her, his first response is, “This is the quietest you’ve been in months.” Touché.

In other news, Tamra is in full party mode. The house is decorated, her mom is over, and she’s ready to celebrate. I wonder if she called Emily to help plan this event. Side note: Why is Tamra the only one wearing a weird party hat? The party is for her 18 year old son, Spencer, who looks like he wants to crawl into a hole. Tamra forces him to talk to his grandparents and addresses how straight-edge he is. Apparently, Spencer is “the golden child” and Tamra is simply overjoyed to have him as her child.

The next morning, over at Emily’s house, Emily and Shane decide to open the box of the twins’ belongings. Their therapist suggests they do this. Shane takes it out and when Emily becomes upset, Shane only tells her, “you’ll be fine.” He gives her ZERO emotional support and states, “it’s all good.” Poor Emily. Her robot husband does little to ease her pain.

Meanwhile, Kelly and Gina go visit Shannon since she is out of surgery. BUT-Why are they dressed like they are attending two different theme parties? We have Kelly as tennis Barbie and Gina as a fly girl. What is with that hat?! It is sweet of the girls to come over and check on Shannon, but it doesn’t take long for Gina to steer the convo back to Tamra. Gina claims she feels “obligated to let” Shannon know that there’s been “a lot of twalk about” Shannon’s “mental health” coming from Tamra. Saint Gina feels a bit of responsibility to share this information with Shannon, but Kelly doesn’t think it’s wise for Gina to get involved. Shannon claims she is “strong and resilient” and doesn’t appreciate Gina stirring the pot day one post surgery.

Later, Vicki pulls a Michael Jackson and throws a blanket over her head as she gets wheeled into her recovery suite post surgery. Vicki looks ridiculous and Steve looks annoyed. He snaps pictures of Vicki and drinks beer whilst laughing in her face. I feel like I would behave the same way if I was forced to take care of a recovering Vicki. The guy’s an absolute angel and I am praying for his sake that he has a 30 case of beers cuz it’s gonna be a long recovery…
WHAT the HELL is going on with Gina and Kelly and their outfits this episode?! I cannot keep up with them. NOW Kelly is going to a sock hop and Gina is channeling Mariah Carey in the early 90’s. It’s hard to focus on this beat-to-death conversation about Shannon when these chicks are decked like this.

It turns out that Shannon called Tamra the minute Kelly and Gina left the day before. Shannon filled Tamra in on the sh*t talking Gina and let her know that Gina is trying to rock their friendship once again. Yes. It’s THAT convoluted. Tamra calls for a ladies lunch and Kelly, Gina, and Emily arrive. Gina wants to “twalk” about what Shannon said to Tamra and Tamra is coming in hot. “Clearly Shannon’s taking the fact that I’m concerned about her and trying to cause fights.” Gina states, “the fact of the matter is, you said a lot of sh*t.” (she certainly did) Tamra feels like she’s been thrown under the bus by Gina and it’s all very confusing.

Luckily, Emily asks for some clarification and Gina has no problem divulging all of the deets. Emily states that her mother suffers from mental illness and based off of what she knows about Shannon, Shannon def fits the “mold.” What happened to not talking about Shannon anymore? Tamra is furious: “Now I’m labeled as a sh*t a*s friend” and she becomes teary. After much ado, Tamra sniffles, “Listen, I don’t want to sit here and talk about Shannon.” Can we get this in writing for once and for all?!