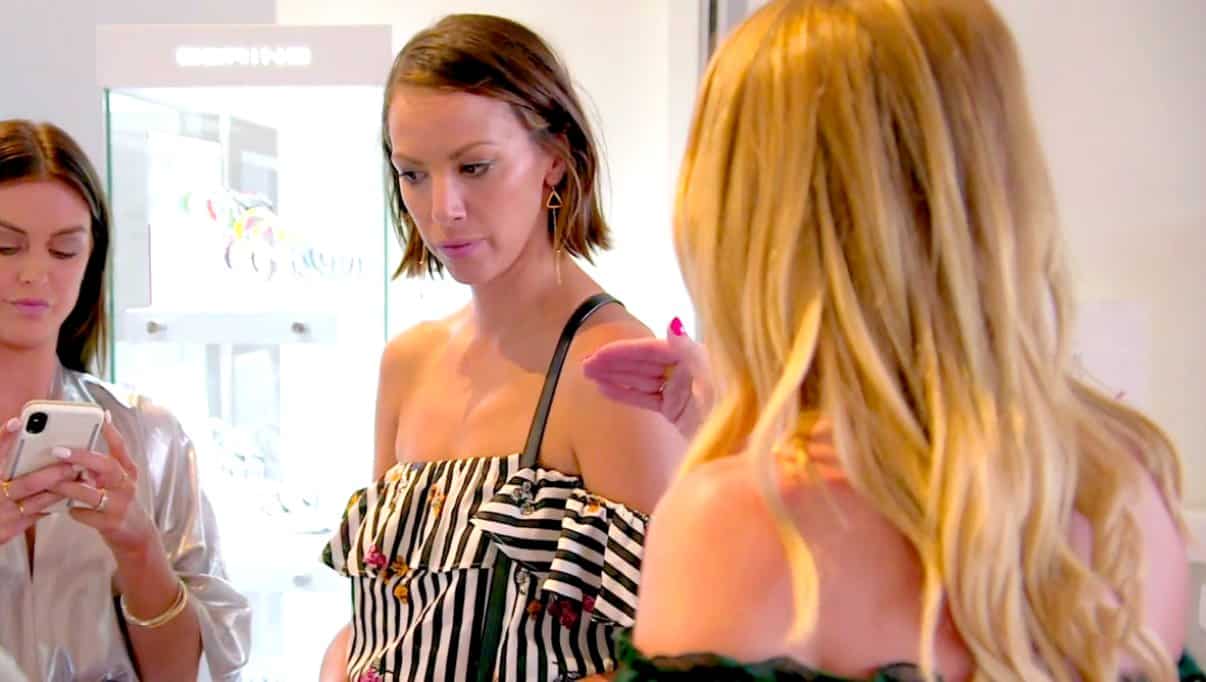 On this episode of Vanderpump Rules, it’s guys gone wild and “Crazy Kristen” returns in Solvang. I’m sorry, but was “crazy Kristen” ever gone?!

Post-meltdown with Guillermo, James storms around the back of SUR with little brother, Harry, following close behind. James swears to Harry that he will continue his sobriety/focus and that he will treat Harry to some fresh black jeans to wear to his new job at SUR.

In the meantime, Jax has no problem voicing his opinion about this whole scenario to Peter, the SUR manager. “Did Lisa and James bury a body in the desert together or something?” I never thought I would ever agree with Jax, but man, why DOES LVP keep rehiring James?! Ugh.

Despite only being in Solvang for a few hours, Kristen is beginning to unravel. The girls are traipsing around this ½ mile town while Stassi gushes about her boo, Beau. Scheana also takes some time out to vent to LaLa about the other girls. She feels like she just needs to be “quiet more” and I think it’s the best idea she has ever had. #teammuteScheana.

I love watching LVP boss Schwartize and Sandoval around. She does a stellar job bringing the dudes back to reality. She also burst their bubble in regards to the TomTom opening party: 100 person guest list and a sit-down dinner?! My word! How are those boys ever going to handle that?! Lisa asks what the boys are up to since their ladies are out of town and Sandoval replies, “Guys are doing a little staycation” and they “have chastity belts on.” Can they BE any more immature?! LVP rolls her eyes, as she should, but keeps it moving cuz she has more serious stuff to deal with.

While Brittany FaceTimes Jax, he gets a bit snippy with her. Kristen meanders over during their conversation and overhears Jax say that James is gonna be spinning at SUR again. Kristen is beyond aggravated that James gets chance after chance with LVP and she STILL is treated like the ugly step-child. Stassi does her best to try and calm down a rapidly spiraling Kristen, who evacuates the store and has gone missing since. Luckily, she joins the ladies late for dinner and shares her feelings about James and his nine lives with LVP. Kristen “can’t wrap her head around” this whole James situation and it seems like she is a bit obsessed with him. Katie tells Kristen her behavior is unhealthy, but ain’t nothing getting through to Kristen at this point.

Over at SUR, brother Harry is a bumbling idiot in the dining room and LVP gets the opportunity to meet him for the first time. Harry does his best to “prove himself” to Lisa, but I think she sees right through his canned intro cuz she’s a boss. While Harry is bussing tables, the dudes all gather around for some cocktails at a swanky bar. They fear what their ladies are getting into and totally know that Kristen is probably the messiest of the messes. Evidently, Jax is having a change of heart about James (did he drink the same Kool-Aid as LVP!?) and James himself will be gracing the guys with his presence shortly. YAY!

The girls are getting turnt up over dinner and even Scheana is ripping shots. “Scheana used to be a buzz kill” and now look at her! Katie takes this opportunity to talk about Scheana’s adventures to “bang town” with Adam. Scheana tries to be coy with the girls and Stassi calls her out. It turns out that Brittany and Ariana spilled the beans about Adam and Scheana with the rest of the group and this causes the waterworks for Scheana. She claims that she feels as though she cannot open up to the girls, plus Katie wouldn’t braid her hair so…yea, that’s cry-worthy. Katie calls Scheana out for cutting her out of her life and belittling her marriage, but the fight gets squashed because #girlsnight.

Once Peter arrives at the guys’ night celebration, he is ready to rage. Shortly thereafter, a sober James joins the crew. The whole dynamic changes a bit. Peter, Tom, and James prowl the bar for ladies and successfully creep/hunt for a chick for Peter, the only single guy in the group. In no time, the newly met girls get brought up to the “exclusive lounge” area to join the rest of the dudes. Jax doesn’t feel comfortable now that girls have joined the posse. It’s mainly just because he 100% does not trust himself around other women, but this we all already know…

According to Beau, “Jax looks like a reformed junkie in a crack house.” Jax is fa-reaking out now that these random chicks are back at the hotel. I love how Bravo has deemed these ladies as “Peter’s new friends.” LOL. While Jax has a panic attack, Sandoval, who BTW always travels with a “bar kit”, whips up some Moscow mules for the “new friends.” I can’t even deal with this guy. Jax and Beau are losing their “cool” and decide the best thing to do is call their ladies, Brittany and Stassi. Beau sings like a canary as soon as Stassi picks up. “Peter found and met some random girls and they’re up in the place.” The hoes in the hotel room are being noisy AF and this sends Stassi into a tizzy. It’s hilarious to watch these people behave so immaturely.

Back in Solvang, drunk Kristen has reached a new level. She is stumbling around like an inflatable blow-up doll and the girls are desperately trying to reel her in, but homegirl is too far gone. Kristen begins shrieking about something Carter texted her. She even manages to fall down like the messy drunk she is. Katie (yes, the same girl who is known as Tequila Katie) tries to make Kristen realize what an idiot she is being, but alas, it is pointless.

Kristen exits and Katie decides to call her hubby, Schwartzie, to figure out what’s going on with the guys. “Can you ask Carter what he texted Kristen?” Carter jumps on the call and Katie demands to know what the hell he texted Kristen to make her freak out. Carter plays dumb and doesn’t shell over any information. Carter claims he will “take care of it,” but no one is quite sure what that means considering he is miles and miles away from the Crazy Kristen situation.

Scheana– of all people- realizes that Kristen is losing her marbles because James is hanging with the guys tonight and that must’ve been the info Carter texted Kristen. Somehow, this finding turns into how terrible of a boyfriend Carter is for Kristen and how the couple has been on the rocks lately.

Stassi chimes in with, “No sh*t Carter is not good for her. He literally does nothing.” Stassi overshares waaaaaay too much and immediately starts freaking out that it wasn’t her place to tell the girls that Carter doesn’t even pay for rent. Stassi seems to believe that Kristen’s anger is misdirected and that she’s really just p*ssed at Carter. Well, this took a turn I wasn’t expecting…