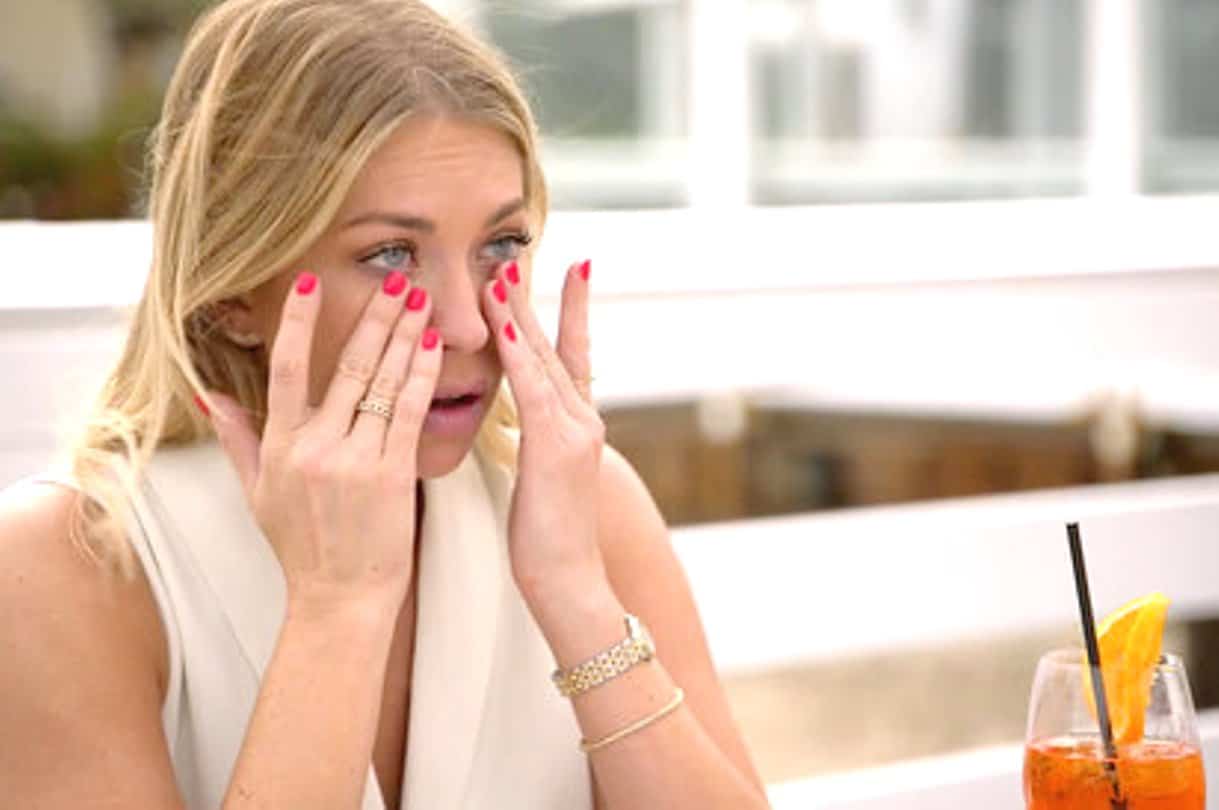 Q: Does relationship counseling work if both parties involved are crazy? A: Find out on this episode of Vanderpump Rules…

James phones his new bestie, Sandoval, to schedule a GOLF (?!) date??? Um, who are these people? Sandoval uses this chat to let James know the newest 411: LaLa and her boyfriend, Randall, have broken up. To that, James retorts, “Oh that’s not surprising. 78-year-old boring, fat Hollywood producer breaks up with 26-year-old wanna-be actress…” James. As salty as ever. I think he’s still just jealous LaLa never settled down with him…

Over at Brittany and Jax’s place, Brittany explains that the break up between LaLa and Randall is real. To try and comfort their sad friend, Katie comes over and the girls create “alcohol filled baby bottles.” But, as it turns out…the baby bottles were not necessary. BECAUSE. The couple is back together. LaLa and Randall are back ON anddd LaLa even got her Gucci slides back, so…it’s a win-win. And it’s convenient considering LaLa is starring in a small-screen film produced by Randall and the premiere happens to be…. tomorrow! Well, that worked out perfectly.

Stassi, Beau, and Schwartzie bring their pups over to Vanderpumps dogs and catch up with LVP. Stassi spills how “Kristen turns into Satan” when she drinks and over shares how Carter, Kristen’s boyfriend, may not be the best fit for her. Not everyone can have it as great as you, Stassi. She is over the moon in loooove with Beau and is set to meet his mother shortly. Beau’s mom is a relationship counselor who has agreed to meet the whole gang and share some relationship insight with these degenerates. I hope she’s prepared to spend the majority of her day trying to right the wrongs these people do on the reg.

Why is Ariana having a full-blown serious conversation about home ownership with Sandoval whilst wearing air buds? Ah. The answer is: “Sometimes I just leave my headphones in cuz if Tom gets on my nerves I can just listen to some classical music…” Honey, you’re gonna need more than classical music to drone out that annoying man. When Tom broaches the kid subject with Ariana, she shuts down and insists it’s nobody’s business. According to Ariana, there is no need to search for a home with multiple bedrooms, as there will never be any offspring running around.

Later that night at SUR, the crew is “working” aka…talking about LaLa walking the carpet for a film she stars in. Insert eye roll here. As Jax sits chowing down on his “employee” SUR meal, James calls him to invite him to the upcoming golf party. Jax agrees to go, despite the fact that he hates the guy’s guts, but hey, golf is fun.

LaLa will NOT STOP TALKING ABOUT HER PREMIERE. She brings Stassi along for some pampering and in between the blowouts and beautifying, Stassi learns about the mini-break between LaLa and Rand. Now that things are great, LaLa shares her Randall love story with Stassi. Storybook romance, I tell ya! Turns out that LaLa let Rand “hit it the first night” and then the next day she got a Range Rover. WTF. We hear entirely too much information about how LaLa gets what she wants from Rand and I am not sure I can ever get over the fact that LaLa legit calls him “Daddy.”

Check out Sandoval’s outfit for the golf adventure. Perfect. Sandoval tells the guys that he is looking for houses with Ariana and further states that he would really appreciate it if everyone could stop asking Ariana about having a kid. Schwartzie jokingly suggests Sandoval give Ariana an ultimatum…hey, it worked for him and Katie. I mean, they’re married now so…

Post LaLa’s movie premiere, the girls go out for some drinks. Stassi is pumped for the “meet-the-mom” moment and can’t wait for everyone to get schooled by Beau’s counselor mom. Stassi wants Kristen and Carter to be open and honest around Beau’s mom. Kristen gets defensive and states that Carter is starting to pull his weight financially, so therefore, things have been better. I’m not really sure why everyone is sticking their nose in Kristen’s relationship, especially Katie. I mean, she doesn’t have a perfect relationship, but she has no problem pointing out every flaw in Kristen’s. Katie makes it clear that Carter needs to go and naturally, Kristen becomes enraged.

The time has come: Stassi gets to meet her “future-mother-in-law” (her words, not mine). Beau’s mom is so sweet and Stassi looks nervous as all get-out. It’s nice to see her so vulnerable and bond with Beau’s mom. His mother says that she is very happy that her son is with Stassi. And it’s adorable to see how NOT freaked out Beau gets when his mom and Stassi discuss in-law plans.

Later, Brittany just got all four of her wisdom teeth pulled out and we get to see a new side of Jax. He is actually taking care of his bride-to-be and “almost gets off on” being her nurse. Ariana, Schwartzie, and Katie stop over at Jax and Brittany’s place to check on the patient. Of course, Jax comes right out about the one thing Sandoval begged him not to address with Ariana: kids. Jax apologizes for talking about Ariana not having babies and then proceeds to go on and on about how important it is to have this conversation before buying a house together. Ariana gets annoyed and can’t believe Jax is trying to give her relationship advice…

Kristen (and Carter…if he’s paying rent this month) are hosting Beau’s mom, the relationship counselor, and the whole crew. OMG. LaLa’s pants are having a moment anddd Scheana just got out of a jazzercise class?? Beau’s mom loves to do group workshops about being “emotionally triggered” and wants to help people with relationship problems.

She certainly came to the right place- these people are crazy. Beau’s mom talks about “the reptilian brain” and you can tell that everyone in that room has completely zoned out. Once his mom wraps it up, Ariana has a moment with Sandoval in the kitchen. She addresses how his buddies told her that Sandoval said “it’s a deal breaker” if Ariana won’t have kids. Sandoval comes up with a “progressive” way to raise kids and Ariana swoons over her man’s potential plans. So there MAY BE a chance of a young Sandoval one day!

Carter finds Stassi and Katie chatting alone and decides to let them know he doesn’t appreciate all their sh*t talking. He claims that Stassi and Katie only hear all of the bad stuff and that he doesn’t need their advice. Carter believes that the reason he gets into fights with Kristen is because Kristen is “scared” of Katie and Stassi and is annoyed by them. When Kristen joins the argument, Katie feels insulted and Stassi decides it would be best to take her “reptilian brain” out of the fight. Kristen is beyond annoyed that her friends are only there “for the demise” of her relationship and Katie storms out. Kristen is literally walking around sage-ing her apartment to get rid of the bad karma and all I can think is thank goodness Beau’s mom is there- seems like her counseling is reallllllllly paying off.