The Real Housewives of Beverly Hills Recap: The Proof Hurts 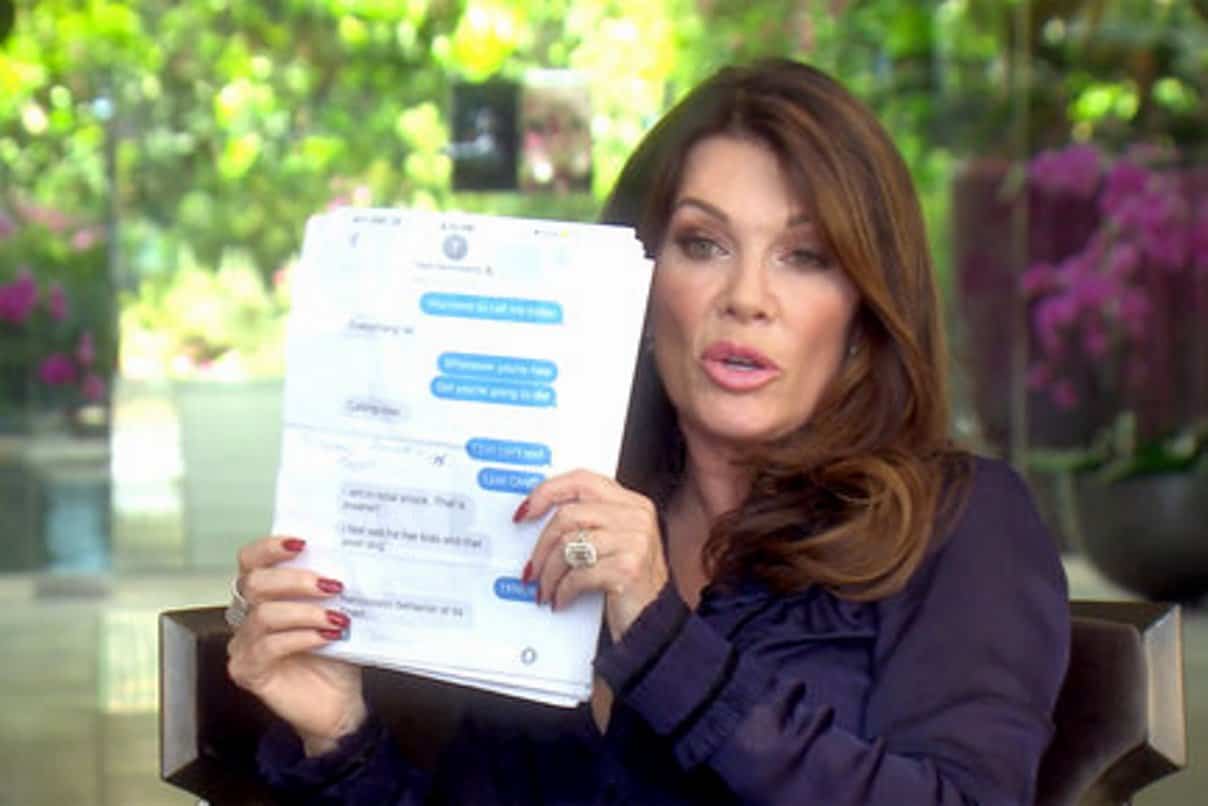 A twisted web of lies unravels in this episode of The Real Housewives of Beverly Hills. LVP is dead set on having the truth come out, no matter what it takes.

Early in the morning, Kyle is busy packing and preparing to send her daughter Sophia off to college.  Sophia is heading to DC for school and Kyle can hardly control her tears.  It’s nice to see some legit emotion coming from Kyle after being pumped full of BS during the Bahamas trip.

Lisa and Denise meet up for a walk and they rehash the adventures they shared whilst in the Bahamas.  Denise tells Rinna all of the women she bonded with the most, then she nonchalantly mentions that since her boyfriend’s divorce is finalized, “we’re gonna get married…soon.”  Rinna is so very excited for Denise and I can’t wait to see that party!

Over at Dorit’s house, she visits with her husband for what appears to be the first time in 3 months.  Why do these two act like strangers when I thought they were husband and wife?  PK claims that “LVP is a genius” when it comes to manipulation and Dorit states that she just wants some honesty when it comes to this whole Lucy the dog situation.  Detective PK deduces that SOMEONE is lying about who is saying what and he hopes to get to the bottom of it sooner rather than later.

Erika greets Teddi, her new-found-BFF, and gives Teddi a tour of her mansion. The girls end up having a chat in Erika’s chapel in the hopes that it will elicit a feeling of a confessional for Teddi?  Say a few Hail Mary’s and this thing’ll blow over?  Teddi tells Erika that LVP fed Teddi information and her bit.  Therefore, it makes Teddi look like the bad guy.  I am beyond confused over this she said/she said storyline, as it is getting beaten to death.

Meanwhile, Lisa Vanderpump has invited John Blizzard, “the culprit,” over to her palace to set the record straight.  She lets him know that he has complicated things.  LVP didn’t really know that Teddi was as close as she is with this Blizzard guy and now she is trying to figure out this watered down drama.  John Blizzard lets LVP that he straight up told Teddi about Lucy the dog.  According to Blizzard, he thought the information was free to be known by whomever, so he simply shared it with his friend.

However, he also admits something else to LVP: “I put words in your mouth that were not true and I am sorry for that.”  Uh, John?  Do you like your job?  John Blizzard further shares that Teddi (“Miss accounta-f*cking-bility” according to LVP) said on text that the Vanderpump Dogs guys should bring Lucy the dog out so she can stir up the drama with Dorit.  Busted.

Kyle and Mauricio begin setting Sophia up in her “already furnished” dorm room at George Washington University.  I have one question, where is all of Sophia’s stuff?  Imagine walking in and finding out this chick was your roommate.  She doesn’t even know how to clean a toilet!

Rinna’s getting ready for a cover shoot!  Wooo!!  “High fashion in the garden.”  Right.  She is just excited to still be on some company’s radar and jumped at the chance for some exposure.  Rinna poses in sequined gowns around her gardens and she claims she has “never looked better or felt better.”  Interesting, coming out of the mouth of a woman who finds joy in sticking her nose in other people’s drama.

Side note: how cute was Mauricio helping Kyle with her hair?  If only she was a bit more grateful for having a doting husband…instead, she chose to focus on petty BS while on the phone with Teddi.  At the Umansky family dinner, Kyle toasts her daughter and shares her pride in Sophia.  This was only after fighting ferociously over Sophia’s college budget, but hey…

In the meantime, post-horse-back riding bonding (??), Dorit, Erika, and Teddi hit up some sort of divey joint and chat over some cocktails and good food.  Relationships are a hot topic and Teddi dishes out a whole lot of advice.  Erika explains how her relationship has evolved with Tom…which basically means enough time has passed for her to do whatever the hell she wants to do with Tom’s money, amiright? Dorit sighs and says, “Oh my goodness!  We are SUCH good wives.”

It’s date night for Denise and her fiancé, Aaron.  The lovebirds are excited to sneak away for a bit and soon they start talking about past relationships, but are thankful they found each other.  Aaron shares that his previous marriage was “such a letdown,” but that doesn’t scare him away from wanting to “embrace and love” all of Denise Richard’s life.  The couple decides on September 8, a mere ten days away, to plan a wedding cuz it’s infinity, duh.

Before sending Sophia off to start her college career, over breakfast Sophia begins losing it.  Her anxiety is beginning to get the best of her and Kyle explains it like she is “leaving half of her body behind.”  Aww… Before we know it, Kyle is back in Beverly Hills and sucked right back into the Lucy debacle.

Kyle and Dorit are meeting with LVP to “clear the air from the Bahamas.”  The tension is thick and you can tell that things are about to get real.  LVP gets right down to it.  She is annoyed that she is accused of something that she “knows” she is not guilty of.  LVP immediately whips out the receipts.  The texts are out there.  LVP displays a printed out, stapled text conversation between John Blizzard and Teddi.

Kyle interjects and asks Dorit how she knew that Teddi knew.  Dorit states that LVP alerted her that Teddi knew about the dog.  This is one twisted web of lies and I can’t believe that Kyle is the one trying to connect the dots for Dorit.  Dorit does her best to follow along and shares, “Teddi specifically said that John Blizzard was given an order.”  My goodness.  Is this a war or an incident regarding a dog?!  Dorit realizes that Teddi’s hands are not clean when it comes to this whole ordeal.  She is frustrated that Teddi led her to believe that LVP was the only one stirring up trouble.  Turns out that Teddi is not as innocent as she claims to be…