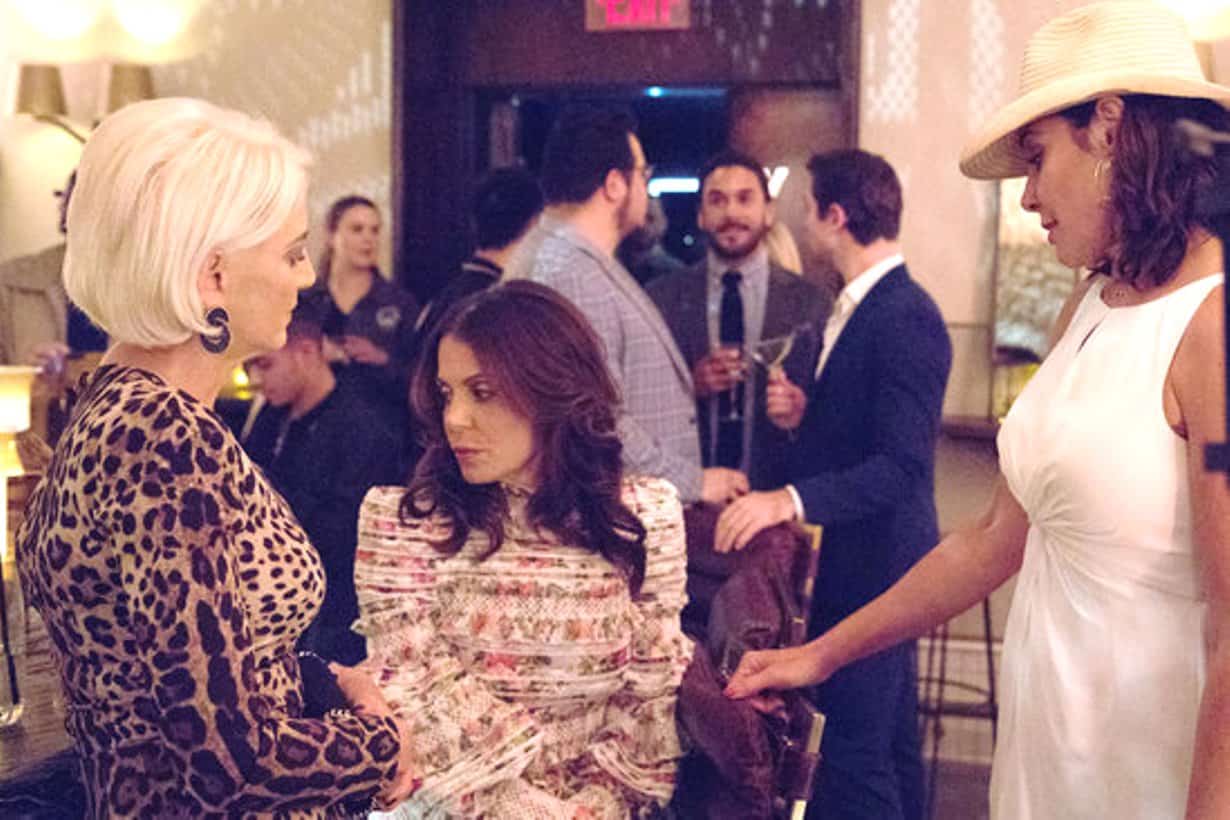 The ladies of The Real Housewives of New York sure are taking their sweet time bringing any sort of real drama this season! Three episodes in, they were still dancing around all the elephants in the room, and quite frankly, it’s all becoming a little difficult to watch.  But I managed, and kept hoping against all evidence to the contrary that the ladies would finally make something happen–they didn’t.  On the first day of spring, last night’s episode came in like a lamb and went out like a kitten.  Here’s how it all went down:

When we picked up with the ladies, they were still at Barbara’s endless clambake, and the blonde bombshells had just made their way on to the scene.  No one was surprised not to see Dorinda, as she’d all but been dis-invited during last week’s episode after refusing to call Luann to smooth things over ahead of the gathering.  But the crowd was surprised to see Ramona come waltzing in along with Tinsley and Sonja, and it wasn’t a particularly happy surprise, either.

Barbara had mentioned during the premiere that, although she’d met Ramona many times in the past, she always acted as if she had no idea who Barbara was, and it’s certainly no secret that Luann and Bethenny don’t care for her.  It also would have been cool for her to stay home with Dorinda, rather than leaving her home alone–especially since Dorinda was a guest in her home.  All of which begs the question: why did she show up at all? Well, Ramona has a severe case of FOMO, and she needs to stir the pot like most of us need oxygen–so there she was.

The blonde crew first walked over to the table where Bethenny and Luann were sitting, and greeted them.  Ramona stood there awkwardly, while Ramona and Bethenny pretty much ignored her, until Luann asked if she’d like to go ahead and talk about the issues between them.  Oooh…would this be something juicy?! No, it wouldn’t. Ramona said it wasn’t the time or the place to get into anything, so Luann brutally dismissed her, literally telling her to go away, and narrowly missing slapping her upside the head with her hand, as she shooed her off like a pesky mosquito.  Well, I have to admit, that part was actually pretty funny.

Next, Ramona went over to greet her host, hugging her and kissing both her cheeks, as though they were old friends, and Barbara wasn’t someone she looked down her nose at before she joined the cast.  Barbara was gracious, as well, welcoming her to the party.  But it didn’t take long for the real Ramona to rear her bug-eyed head.  She just couldn’t help herself.  She boldly asked Barbara why she’d told Dorinda not to come, and pointed out that since there were so many people there, Luann and Dorinda could have easily avoided a run-in.

Barbara patiently explained that she hadn’t told Dorinda not to come, but had simply asked her to reach out to Luann.  Ramona said that was unnecessary, and pointed out that Luann had said plenty of nasty things about Luann in the press, and that maybe she was the one who owed Dorinda an apology.  She added that Luann had just confronted her, as well, but that she hadn’t taken the bait out of respect for their host.  Yeah, right!  Ramona doesn’t respect anyone–she just didn’t want to get called out about her nonsense.

Barbara reminded her that she’d flat out lied about Luann when she told the world during last season’s reunion that Luann had been tossed out of a party because of her drunken behavior.  Ramona said she hadn’t been lying, but Barbara pointed out that she’d been at the said party with Luann, and that she knew for a fact that she hadn’t been drunk, and that they’d left together on their own accord, and had certainly not been asked to leave.  Ramona sidestepped that little morsel of information, and simply went on to talk about how Luann had been tossed out of another party at a hotel.  Barbara said she knew nothing about that party, and Sonja, who has somehow become the voice of reason among the ladies this season, and had been listening to the whole exchange, said that the matter sounded like it had been resolved, and perhaps they should just change the subject, and move on.

And what better issue to move on to than their good friend Bethenny, who was grieving a tragic loss?  Had Ramona even extended her condolences to Bethenny, Sonja wanted to know?  Ramona said she had–by text, and Sonja told her that perhaps now would be a good time to do so in person, as Bethenny was sitting twelve feet away, but Ramona declined, saying that she had tried with Bethenny too many times, and just couldn’t handle any more tension that day. Good grief!

Across the patio. Tinsley was acknowledging Bethenny’s loss, and asked how she was doing.  Bethenny, sudden tears choking her up, explained that it had been difficult processing such a sudden and profound loss, and that she really missed Dennis.  She also revealed to Tinsley that Dennis had proposed to her shortly before his death.  She said that they’d kept it quiet, and had been trying to figure out what their new lives together would look like just before he passed.

But oddly enough, in the very next breath, she said that she had a date with a new man–someone she’d recently met, who’d been pursuing her ever since they’d been introduced in a hotel bar.  She said that she wasn’t sure how she felt about dating so soon, and feared she may burst into tears and spend the evening talking about Dennis, but that she also felt it was time to move on.  Tinsley agreed, and advised her to snatch this new man up before some other woman got to him. Well, they say everyone grieves differently.

Ramona had set a timer for the ladies’ stay at the party, and after about half an hour, she told Tinsley and Sonja that it was time to get back to her place and check on Dorina–again, why did she even go?! They both felt awkward leaving so soon, and Luann admonished them for being rude.  But Ramona didn’t care, and since Barbara offered them some food to go, she grabbed a few 3lb lobsters, popped them in the tote bag she inexplicably just happened to have with her, and lead the way out.  Tinsley was mortified, and the rest of the women couldn’t believe their eyes, but, as usual, Ramona lacked the sense to be ashamed of herself.

When they got back to Ramona’s house with the lobsters, even Dorinda was surprised they’d come home so soon.  As they made snacks, and discussed the party, talk turned to Luann’s legal issues, and lawsuit filed against her by her ex-husband and children.  Sonja said that she wasn’t sure what the status of the proceedings was, and mentioned that she’d asked Bethenny to have Dennis advise Luann before his death, since the situation required a “smart man.”

Ramona said she wasn’t sure how smart he was, considering that he’d been “doing drugs.” Sheesh! That was unnecessarily harsh, and the man did just die–how about showing some respect?! But that’s just not Ramona.  Dorinda and Tinsley simply said they weren’t going to discuss it and left the room, and when Sonja asked her how she could say such a thing, Ramona just ignored her, and said she just wanted to “honor him.” Seriously?! What is actually wrong with her?!

Later, Dorinda went to lunch with Barbara, and the two discussed the clambake.  Dorinda told her that getting along with Luann was tough, and pointed out that Barbara had once found herself in a similar situation with Luann.  Barbara acknowledged this, and began to advise Dorinda on how to patch things up with The Countess, but the advice was not well received.  She told Barbara that they were there to discuss their own independent relationship, and that she’d handle things with Luann in the manner she deemed fit.

And she would soon get the chance.  The two finally found themselves in the same room at a party back in the city to celebrate Sonja’s Paper Magazine cover, but the show faded to black, just as Dorinda plastered on a fake smile, and walked across the room at the urging of Bethenny and Barbara to approach her former friend.  We’ll have to wait until next week to see how it all play out–and hopefully, we’ll finally see some fireworks. Stay tuned!