Vanderpump Rules Recap: Katie and Tom Get Into Ugly Fight on Vacation 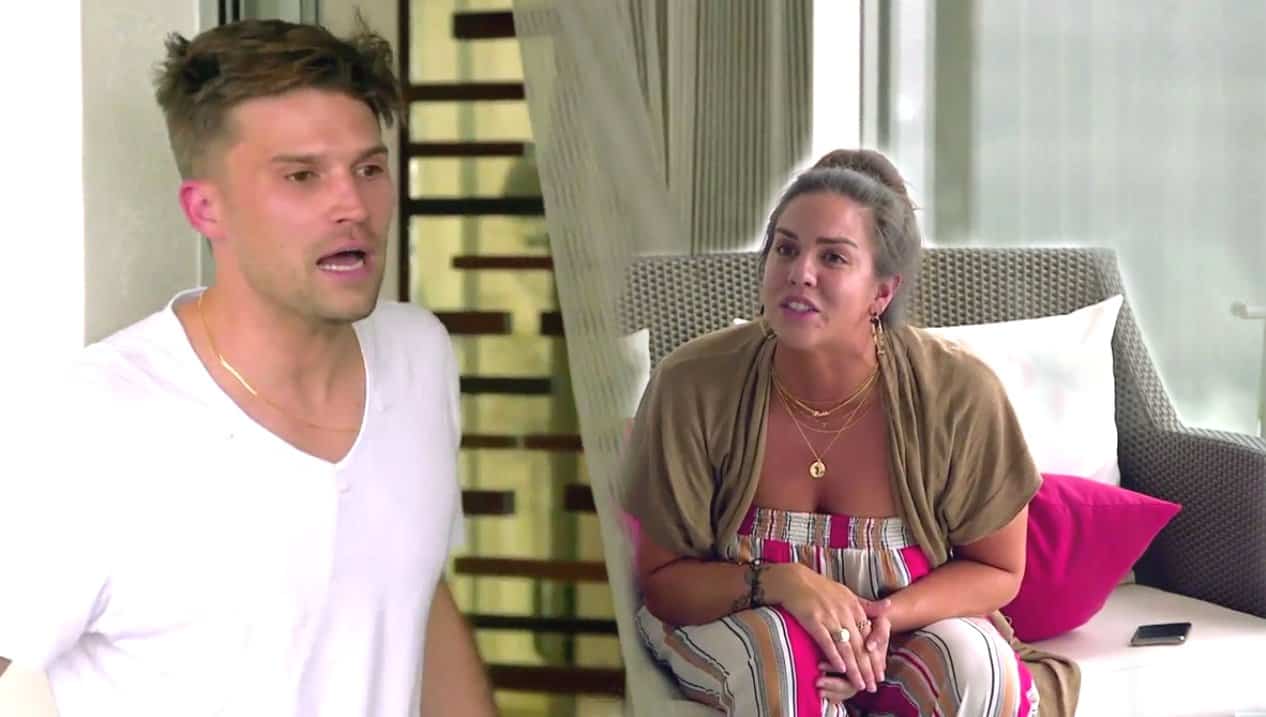 Big things are happening on this episode of Vanderpump Rules. A restaurant is opening, a vacation is coming, and Schwartzie finally stands up to Katie, his curmudgeon of a wife!

Sandoval and Ariana are preparing for the TomTom opening party…Sandoval is in his tighty whities wearing motorcycle goggles and a skull cap and ponders this life-changing event that is about to occur. “I never really got to see my name in lights, but tonight, I will.” Tonight’s the night. Everyone primps and preps for the big debut of the restaurant…yes, even Kristen, that is if she can tear her boyfriend Carter away from the video games.

The crew discusses the LaLa freak situation with their significant others while they get ready for the night. Ariana suggests that LaLa seek grief counseling since “being angry is high.” Speaking of significant others, Katie sits on the couch as her sweetie, Schwartzie, gives himself a pep talk for the grand opening. “I just hope that now that it’s open, maybe you’ll have some more time for me.” Of course, Katie. Make tonight about you on the biggest night of your husband’s life.

OMG. Ariana calling Sandoval “James Bond” is a gross understatement. Sandoval’s $18,000.00 motorcycle sidecar is obscene, as is his surprise arrival at Schwartzie’s place. Sandoval scoops up his other Tom and hands him a personalized matching helmet, goggles, and gloves. “This is a moment that I will remember forever. I love you, Sandoval.” I can’t tell if this is serious or a straight up joke. Either way, I am very concerned about Sandoval’s sanity.

Another crazy person amongst the group….Kristen. She is THRILLED to be able to attend the opening of TomTom, so much so that she has to almost pinch herself that it is actually happening. “This is a massively huge deal for me,”- Kristen. What is with these girls being so self-absorbed?! Kristen: newsflash. This night is about Tom and Tom, the two doofuses who forgot to put gas in the motorcycle. Nonetheless, they still roll up in style and even LVP calls this choice of transportation “perfect.” The fellas pop champagne and attempt to look like civilized business owners all whilst wearing matching white suits and helmets. How’s that for a mental image?

Once everyone arrives, the gang sits down at an outdoor table and prepares to be awed by the TomTom experience. Katie desperately seeks Schwartzie’s attention as he celebrates the biggest night of his life. I smell trouble brewing in the very near future…I’m talking Tequila Katie trouble. Perhaps the Mexico trip will be the turning point.

The girls discuss LaLa’s recent meltdown and LaLa admits that she “lost her sh*t.” Naturally, LVP overhears this conversation and calls LaLa over to discuss the altercation. LaLa explains that she felt “extremely disrespected” and that she did not act badly. LOL. Because LVP claims she has been hearing a different side of LaLa’s tale, she calls SCHEANA over to find out the truth. Scheana doesn’t do a great job of sticking up for LaLa, but she DOES admit that James behaved well throughout the ordeal. I’m sure Scheana’s gonna hear it from LaLa…

“I know Tom has to work the room and schmooze…” but I want to mope and make the night about me. Katie is still at it- attempting to get her hubby’s attention as he does what a (1/3 part) business owner is supposed to be doing. While Katie throws a temper tantrum, the Toms celebrate with LVP. It is, after all, a REALLY big deal. To wrap up the evening’s festivities, Sandoval and Schwartzie somehow get LVP into the motorcycle sidecar and Sandoval whips her around town. Classic.

The Mexico trip is getting closer and that means packing is imminent. Because Stassi and her boyfriend Beau are starving for camera time since they aren’t opening a bar or anything this season, Beau comes in wearing a dinosaur suit serving Stassi shots just to spice up the packing ordeal. Brittany and Jax are having a bit of a different packing experience. Jax is actually being the practical one, worrying about their upcoming engagement party and (still) crying over costs. Over at Sandoval and Ariana’s…“Packing hats used to be stressful, but now that I have my hat box, I’m good to go.” Sandoval is absolutely ridic when it comes to his “essentials.” Kristen can’t pack without talking sh*t about the witches of WeHo and everyone braces themselves for the crazy times ahead.

LaLa’s mind is blown that she has to fly commercial. Yea…what’s up with that?! The tension continues to build between Katie and Schwartzie since he got randomly selected to travel via first class. There’s a reason to get mad at your husband.

As the majority of the group lands in Mexico, James pays a visit to Villa Rosa, LVP’s castle. He hangs with Max, Lisa’s son, and pretends to be friends with him just so he can get close with LVP. LVP invites the boys for some coffee and they chit-chat. James shares that he is doing the best he can to be good again. When LVP asks James if he is drinking at all, James comes clean and states that he had one beer with his dad because he “has been doing really good.” It’s like going on a diet, losing weight, and then rewarding yourself with an ice cream cake cuz you’re “doing really good.” LVP reminds James that he has a drinking problem, and James can’t wrap his mind around LVP’s frustration and concern. She also tells James that maybe his future “doesn’t include SUR.” ?

Mexico doesn’t know what’s about to hit it….this crew of wackos has made their entrance. “Let’s take a moment to appreciate our last moments of sobriety.” Thanks for that, Schwartzie. Poor guy. He def needs a drink after getting rage texted by Katie over the entire duration of the flight. As everyone begins to get settled into their rooms and Brittany attempts to overcome her fear of heights, Katie and Schwartzie silently enter their room. Katie immediately sulks on the balcony and the couple couldn’t be any less couple-y even if they tried. Schwartzie calls Katie a wet blanket and states that this is “like vintage Katie.” He doesn’t want her to put a damper on this vacation, as she has a tendency to do.

Katie throws a fit about Schwartzie not “pulling his weight” and cries about how she never gets to see him. I mean, she is making it so delightful to be around her soon… The fight escalates and gets louder and louder…loud enough that Sandoval and Ariana can hear it from their balcony next door. Katie demands Schwartzie listen to her for once and Schwartzie just outright says that he doesn’t like the sound of her voice. “It’s like a cacophony.” I am going to have to agree with Schwartzie on this one, but I digress. Schwartzie doesn’t like Katie’s tone, calls her selfish, and her only comeback is “okay, green pants.” Good one. Luckily, this episode will be continued next week, where I am sure things only go further south for Mr. and Mrs. Bubba.