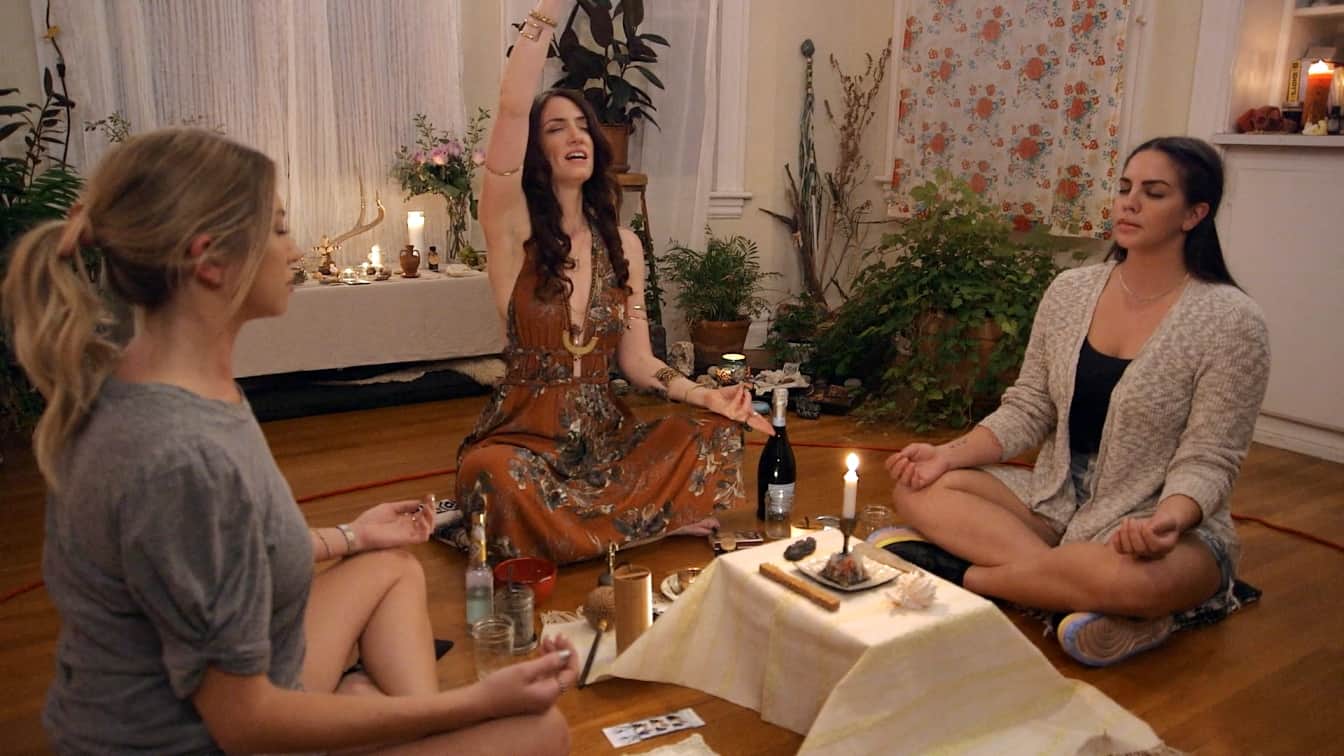 On this episode of Vanderpump Rules, I love when LVP drops into SUR. The employees actually pretend to work, well, except for “Club promoter” Katie.

She tells LVP that planning Girls Night In is “a lot of work,” so Katie thinks for now she wants to “put a pin in it…take a little break” from the event. Yea, heaven forbid she actually has to focus on something besides making her husband’s life a living hell. LVP reminds Katie that she better keep working because “the check that Schwartzie gave me was like a big rubber ball. It bounced.” LOL.

Why does Ariana entertain Sandoval and his d*ck flute? What those two do in their spare time is baffling. To add to the baffling scenario, James pops over to their apartment. They talk about Mexico, James gets salty AF, and proceeds to lose what little marbles he has left upon hearing that he cannot DJ Billie Lee’s upcoming event. Ariana attempts to talk to James about LaLa’s “fight or flight” behavior, but James isn’t listening. He storms out in aggravation. Huh?! And then he walks back in. Just when we thought we were rid of him…James feels like everyone is pushing him and despite any good recent behavior, he just can’t catch a break. It only took 7 minutes for James to cry this episode. World record.

Today is Stassi’s photo shoot for the cover of her basic b*tch book. Someone, please make Stassi change out of her green confessional outfit before she has a Janet Jackson Super Bowl nip slip moment. I hold my breath every time she makes a comment, which is quite frequently. Katie and Beau come to support Stassi during the shoot and Katie asks Beau, “How does it make you feel dating an author?” Beau, the beaten down boyfriend, likes to pretend that all of the abuse he withstands from Stassi stems from her stressing about writing the book. Excuses, excuses.

Another therapy session for Brittany and Jax. Maybe one of these times the therapist would just be honest and save these two the minor fortune they waste on therapy. Lord knows they need any extra income considering Brittany’s engagement party planning. Jax tells the therapist that they’re good, but sometimes Brittany winds up being the person he yells at in frustration. Sounds totallllllly healthy to me. Matching outfits at therapy simply won’t be the band-aid to fix Jax’s past cheating scandals.

Schwartzie phones Samantha, his banker, and uses his best phone sex voice to ask for a “gangster” suitcase of extra crispy money to try and prove to LVP that he is, alas, a responsible .000005%-business-partner. Nothing screams responsibility like traipsing around LA with $50,000 in a suitcase, amiright?
“I’m courting you, my lady.” Kristen is beyond creepy befriending Ariana. After one kiss, these two are like BFF’s. I feel like she has an alternative motive, anyone else? In honor of the passing of her father, Ariana wears a piece of his jewelry and that gets Kristen talking about it. 5 years later, Kristen can finally admit that she was a d*ck to Ariana that night. The new and improved Kristen apologizes and gets emotional reflecting on her past behavior, but nothing can seem to break this new found bond between the girls.

Another LaLa show. The gang all gathers at some weird low budget venue that only serves liquor and Shasta. LaLa’s man couldn’t be there and neither could LVP, but at least LVP sent roses to make up for her absence… When LaLa comes out for her debut, I am not quite sure why she is singing the song written specifically for her father whilst wearing negligee, but I digress. LaLa uses this show as an ode to her dad and it causes some emotions amongst the crowd. LaLa and Stassi bond over alcohol- how it affects them and changes their behavior. Ariana takes a moment to tell Sandoval that Kristen apologized for being a b*tch when her dad died 5 years ago. This LaLa show is really bringing the team back together.

OMG, they are actually going through with this “puppy shower.” Raquel tries to justify that having a puppy is pretty much like having a baby, hence the puppy shower. James pretends that Raquel’s FAMILY is embarrassing, but really, I am cringing while watching these grown adults play “poo bag toss” and “pin the tail on the puppy.” Sandoval commends James for staying sober during the party and asks James about his future plans. James remains confident that one day he will get his job back at SUR, but I think he needs to get out of la la land.

LaLa and Scheana steal a moment at work (where else) and LaLa talks about how she can no longer mess with booze. Of the four times she drank recently, she breaks down and has decided to never have a drink again. And thus begins LaLa’s difficult journey with sobriety.

How can Katie and Tom afford a Land Rover but his checks (PLURAL) bounced?! Schwartzie is sweating bullets because today is the day that he is scooping up his $50,000 cash. Katie is less than moved by this feat that her husband is about to pull off and is far more concerned about meeting with an oracle later on in the evening.

Ariana and Tom rolling up to TomTom in the motorcycle sidecar is outrageous, as is Schwartzie’s entrance with his suitcase full o’money. Schwartzie didn’t seem to think this through, considering he handcuffed the suitcase to him and ya know, bathroom problems. Upon sitting with LVP, Schwartzie slams down the suitcase. “I wanted to show you that I’m serious” so he’s handing over a suitcase of 10,000 fives, ya know, for visual impact. Hilarious. I guess that means that the restaurant can still be named TomTom, huh?

Katie and Stassi head over to the Oracle of Los Angeles. The whole reason the girls are going to visit this oracle is because Stassi is looking for answers for why she acts out, despite being in a wonderful relationship. Stassi’s “demonic spirit” is possessing her when she is angry and suddenly it all makes sense to Stassi. Here I was thinking it was just that she drank too much, but alas, there’s a SPIRIT causing her suffering!

Stassi fake ugly cries talking to the spirit and demands that it leave. The oracle sings and dances and I am impressed by Katie and Stassi’s ability to keep straight faces. The most interesting part of this whole ordeal is that Katie would rather sit by Stassi’s side throughout this rather than watch Schwartzie deliver a suitcase of fivers to LVP. Priorities.