by Julia May 22, 2019 283 comments
ShareTweetWhatsappPinterestRedditTumblrMailFlipboard 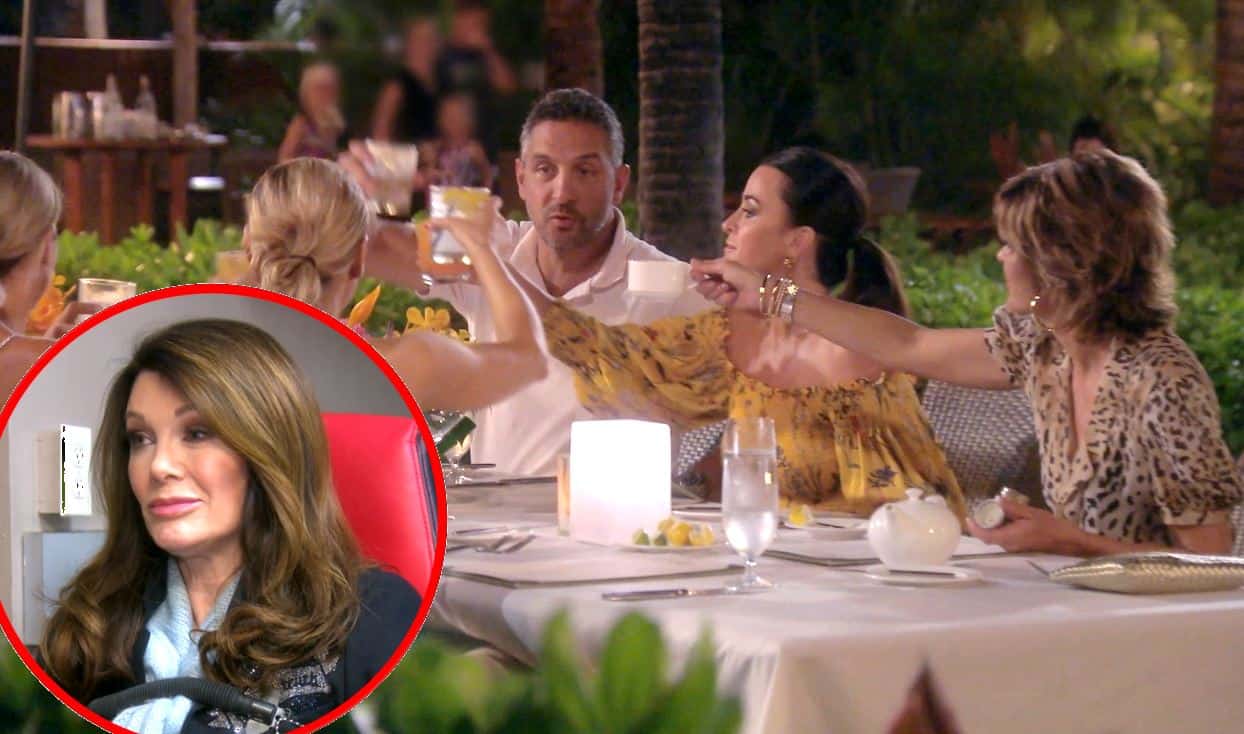 On this episode of the Real Housewives of Beverly Hills, it’s LVP vs. the polygraph test…this is gonna be the be-all, end-all, the final “I-told-you-so” for the infamous Radar Online story…at least one would think…

LVP is out to prove her innocence to the rest of the b*tches. LVP claims that she knows she is not guilty, hence her eager participation in this lie detector test. The polygraph tech starts right away and the next thing we know, the money question gets brought up: Did LVP give the Dorit story to Radar Online? After a few tense moments and a couple of more questions, LVP finds out that, according to the polygraph test, there is zero chance of her lying about any of the important questions…remind me again WHY LVP feels like she has to go this far to prove her innocence?! Is she really letting these troll women get to her?!

It’s time for Camille‘s wedding in Hawaii. Kyle needs a new best friend, being that she and LVP have had that falling out, and she is clinging hard to the bride-to-be, especially now since Kyle is one of her bridesmaids. The women prep for the big day, as if it is their own, because let’s face it, they are only good at making things about themselves. Over in Big Island, Hawaii, the ladies, Mauricio, and Edwin load up enough luggage for an entire year into a Sprinter van. Where is HarryHamlin? Rinna claims it’s a “co-dependent” relationship, but I think it’s more like he loves any excuse to be away from his wife. Same goes for Dorit’s hubby, PK. I mean, that accent must get pretty old, pretty fast. Kyle is #killingitasabridesmaid and feigning confusion about the wedding’s itinerary…she’s also sweating about whether or not she will actually fit in her bridesmaid dress.

Later, Camille greets the crew on the beach and Mauricio and Edwin continue to tag along. Camille lets the ladies know that she had a sit-down convo with LVP and explains that Kyle is the reason LVP is not attending Camille’s wedding. Camille thinks this is all ridiculous and Rinna states that no matter what’s going on, for a celebration like a wedding, you “just show up.” Paddleboarding serves as a great distraction from the brewing drama…too bad that segment only lasts .5 seconds…

Is it bad that I didn’t even realize that Denise wasn’t in Hawaii? Apparently, she has to shoot a new movie and therefore, cannot partake in the wedding celebration. Patrick Muldoon, Denise’s ex-boyfriend, co-star, and “best friend,” comes over to prep for the upcoming film. The two get to talking about Charlie Sheen and his love of hookers and I am not quite sure how we always get there with Denise.

The Hawaiian adventure continues as the gang gets shuttled over to Camille’s house. Camille explains that despite the awkwardness with Teddi, she is not focusing on that drama now. Camille modestly calls her Hawaii house “pretty grand” and with a sweep of her hand, invites everyone in for the pre-wedding celebration. Camille tells Kyle that her mother is in the hospital and can’t attend the wedding. It’s so sad. Also sad is the way these women fear a carb. Did you see their faces when the waiter brought over that pasta? Kyle states, “I swear I’m being sabotaged.” Again Kyle, this is not about you…it’s a damn wedding celebration.

Teddi decides that they should play “what’s your favorite/least favorite thing” about your significant other. Mauricio doesn’t understand how to play, as he rattles off a long list of all the things he loves about his wife. He is just trying to remain in good standing with Kyle, as he saw what happened to Edwin when he actually spoke the truth about Teddi’s organizational downfall. Edwin tries to backtrack and says, “You don’t always want that Playboy chick that everybody wants to f*ck.” Rinna naturally takes pseudo-offense to this because in case you forgot, she posed for Playboy…twice.

The next morning, Dorit pops in to check on Rinna, who has lost her voice- PRAISE BE. Her sore throat has taken its toll on her and we are gifted with her silence!

Whilst at the pool enjoying a day of relation, Teddi asks her hubby, “Do you think the kids can feel a difference at how much I’m working now?” That’s Teddi’s attempt to show the world that her accountability business is actually a legit business. Teddi shares that she has been approached to sell a portion of her company, but she’s having mixed feelings about this.

On the set of Denise’s Christmas movie, which I can only assume will be a hot hit in the very near future (can you sense my sarcasm?), Denise chats with Barbara Eden, from “I Dream of Genie,” who also happens to be one of her costars. Look at Denise schmoozing with the rich and famous!

Back in Hawaii, Kyle and Mauricio sit down for some breakfast and Mauricio talks about their future as a couple. Mauricio half-jokes, I hope, about having another kid and then changes the subject to finalizing trusts for their children. Just some light early morning conversation…

Because Camille is busy with her pre-wedding planning, the Beverly Hills ladies ditch their bridesmaid duties and head out for their own dinner. Screw the bride, amiright?! Let’s discuss Mauricio and how turnt up he is…looks like someone is loving the “island life.” After a toast, Kyle spills the tea: she knows someone who knows someone who saw LVP taking a lie detector test. Dorit is “confused” (shocker) and Kyle shrieks that LVP acts like she is “accused of murder.”

Rinna risks her sickness and vow of voice rest to ask a very valid question: who administers the questions for a lie detector test? Good point…I mean, John Sessa DID BYOQ…who’s to say he didn’t practice with LVP beforehand??? I realize that these women are grasping for straws to try and disprove whatever has been proven by said lie detector test. “They are not admissible in court!” The caddy crew thinks they’ve caught LVP once again. Rinna raspily says LVP simply did this to protect her image…I think LVP did this to shut them all the hell up.

“Do not judge my bridesmaid skills, I have not been a bridesmaid in 20+ years.” No one is judging you OR looking at you Kyle, because today is Camille’s day. Luckily, Camille’s mom has made it to the wedding and came straight from the hospital to celebrate. Kyle arrives at the “getting ready” house and she looks stuffed into that bridesmaid dress. I just hope she doesn’t bend over, because it’s def gonna spilt. Once Camille is in her wedding gown, she gleefully yells out, “I’m off to get married again! This is number two! I’m going to be Mrs. Grammer-Meyer.” Convenient to keep part of that last name, huh?

In other news: OMG- Edwin’s baby ponytail. The group makes it just in the nick of time and dashes to the ceremony. For a second wedding, it is quite beautiful and extravagant. Camille lunges toward her husband-to-be and aggressively savors every iota of that smooch sealing the deal as man and wife. I just wish LVP and Erika would have been there to witness this…at least they would have had on some exciting ensembles, as opposed to these goons…