by Julia May 30, 2019 21 comments
ShareTweetWhatsappPinterestRedditTumblrMailFlipboard 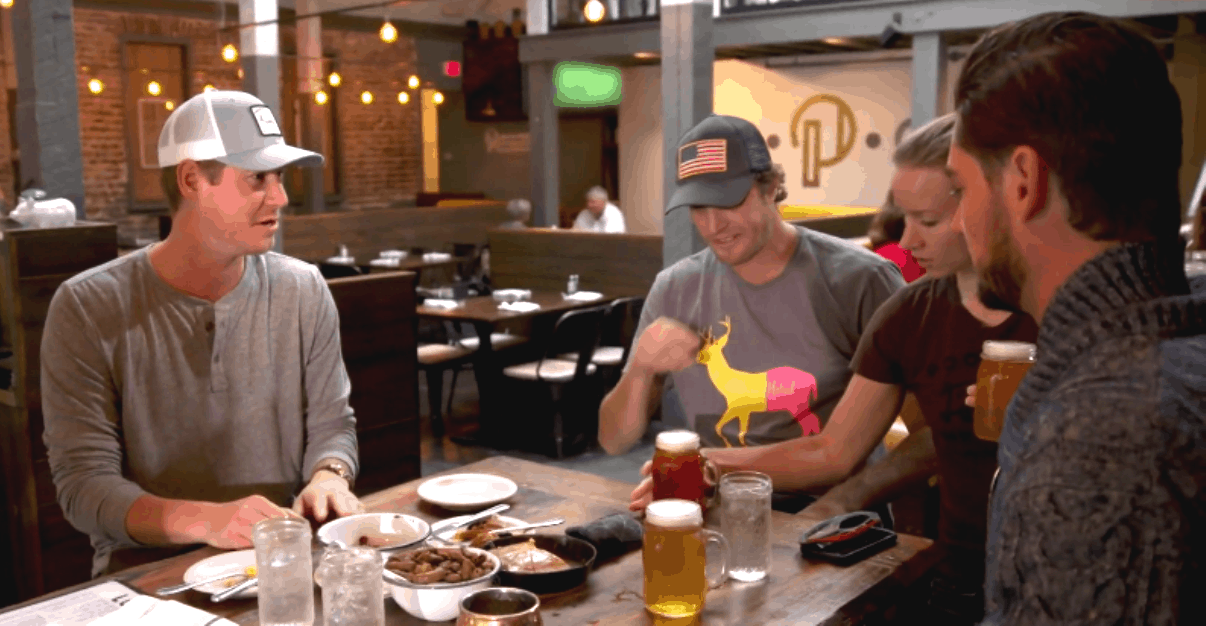 On this episode of Southern Charm, word on the street is that someone has a wandering eye. Will she be confronted to find out the truth?

Over at Labeye, Naomie phones her Parisian parents and I love their accents so hard. They discuss Friday, where an event will be held at Nico, their family restaurant. Because her parents will not be around to handle the event, it falls on Naomie, the busy boss woman that she is.  Naomie lets the world know that she gets sooooo busy sometimes that she doesn’t even shower. What’s my excuse?!

Chelsea gets a visit from her dad. He watched her dog Tyson during the housewarming party, so he’s back returning the pup. They sit down to talk about Chelsea’s boyfriend, Nick. Her dad feels as if “there’s no future there” and needs to understand why his daughter always has a LDR. But, at the end of the day, he likes Nick: “He’s a man, he’s not like a housecat. I think Austen’s a housecat.” Buuuurn.

Anyone else find it strange that Cameran and her husband, Jason, do not say I love you when they hang up the phone? Cam returns home and relieves her mother, who was watching baby Palmer whilst Cam showed a few houses. She explains to her mother that being home with a baby is very “mind-numbing” and “isolating,” especially when Jason is on call. Cameran’s mom shares some words of wisdom about motherhood and reminds her that she cannot dwell on dark thoughts.

Chelsea and Craig meet up at the nursery for some landscaping. Naturally, Chelsea brings Craig, cuz he has an “eye” for that sort of thing…plants and pillows. Who knew? Crag dishes on Kathryn‘s new place AND her Rolls Royce. It’s gotta make you wonder how she is affording all of this, particularly because she only works at a boutique…

Money-bags Kathryn and Naomie grab some lunch. Kathryn lets Naomie know that she is dating someone new. WHAT. He’s a 38-year-old, Democratic senator named Joseph Abruzzo (I know, so strange that she has shared that information). Turns out that Joe is a “disgraced politician from Florida” who apparently has racy photos all over the internet and is accused of some pretty terrible things by his ex-wife. Thanks, Craig, for doing the digging! He does have a purpose on this show after all!

Chelsea and Craig worry that this is going to be yet another life lesson for Kathryn, as this guy has tons of red flags flying high. Kathryn tells Naomie that she is planning a girls’ trip before things get heavy regarding custody of her children that she shares with her criminal ex, Thomas Ravenel.

Shep, Mr. Hot Mess Express, has decided he wants a puppy. Because he can take care of himself. He phones his mom and lets her know his plan to adopt a dog. She is ticked off by the prospect of it, but Shep tries to let her know that it could be a good thing for him…could give him SOMETHING to be responsible for. Craig joins him and orders a “Double rose in a pint glass.” Between that and Craig’s night of the pillow photo shoot, I’m starting to scratch my head. Shep shares that he was out with Whitney and Austen until Madison scooped Austen up and ruined the guys’ night.

With that, Craig shares the newest gossip: Madison had a friend DM Gentry, Danni ‘s boyfriend, because Madison thought Gentry was cute. My goodness. At least be smart about cheating if you must be a scum bag and do so. Craig feels it’s necessary to let Austen know the latest, but it’s gonna be hard to let down that doofus. Austen cooks, cleans, and preps for an evening with Madison over at his crib. Poor guy doesn’t know what’s coming for him. I mean, he’s thinking about the M word (marriage) with Madison…needless to say, he’s in for a big surprise.

Naomie takes her Porsche over to Nico. Nico is expanding the menu to keep up with the competitive, evolving food culture of Charleston. Danni, Chelsea, and Cam show their support and enjoy free food. They stand around and gossip. Chelsea explains that Craig got her worried about Kathryn’s new man. No one can believe that Kathryn is cruising around in a Rolls Royce and everyone is having a hard time taking this new relationship seriously. Cam and Chelsea catch up and discuss Chelsea’s man, Nick.

Cam reminds Chelsea how long three years really is, but she doesn’t seem to mind. Seems as if Chelsea is drawn to the relationship because there’s no pressure. She may be onto something there. Later, the ladies talk about this girls’ trip that Kathryn is planning in treehouses. The way they explain it is a “mansion in a tree.” I don’t quite understand it, but it should be entertaining. Finally, Chelsea comes out with the juiciest information and Danni confirms that “My Gentry” was the one involved. Madison thought he was cute and had a friend reach out to him on Instagram. Madison and Austen cannot be taken seriously as a couple. They are becoming a laughing stock.

Shep and Craig decide they absolutely have to fill Austen in on the details of Madison’s newest “cheating.” It’s as if the guys are preparing for a big game or test, but when Austen strolls in, it’s game time. It’s awkward AF as Shep and Craig decide who is gonna be the one to break the news. Poor Craig draws the short straw.

“This gives us no joy…” and you “can do what you want with it,” but Craig comes out with it. He lets Austen know about the DMing and Austen refuses to believe this information. He calls it #fakenews. Craig suggests they call Danni and ask her for the truth about Madison. Danni spares no detail and that leaves Austen reeling, as this whole debacle only took place 4 days ago. I feel like Shep is enjoying this too much and is sitting there like, “I told you so.” Not helpful in a situation like this.

Austen storms off in disbelief and Shep asks him, “what are we gonna do now?” “WE?!” Welp, this leads to shots. Many, many shots. Austen is drinking away his sorrows until he gets a call from Madison. Craig cannot understand why Austen is fighting to hold onto this relationship and Austen lets Craig know that he only cheated because Madison cheated first. Back and forth the duo go. She cheats. He cheats. She cheats. When will it end?! Shep suggests that Austen stop being “a pushover” and Austen becomes defensive. Somehow, Shep and Craig talk a very drunk Austen into calling Madison, right here, right now, to find out the truth.

Austen steps outside to call Madison and the tension is thick. He fills Madison in on the rumor circulating and naturally, Madison denies the DM situation. Austen tells Madison that she’s “deflecting,” until she eventually comes out with the truth. She giggles that yes, it is true. She DID hit on Danni’s boyfriend and with that, Austen is done. “Total admission.” Austen looks devastated and Shep is happy to be there to pick up the pieces. Austen begs for some compassion from these trolls and Craig remind Shep that it isn’t about them. This about Austen. Newly single Austen, that is…