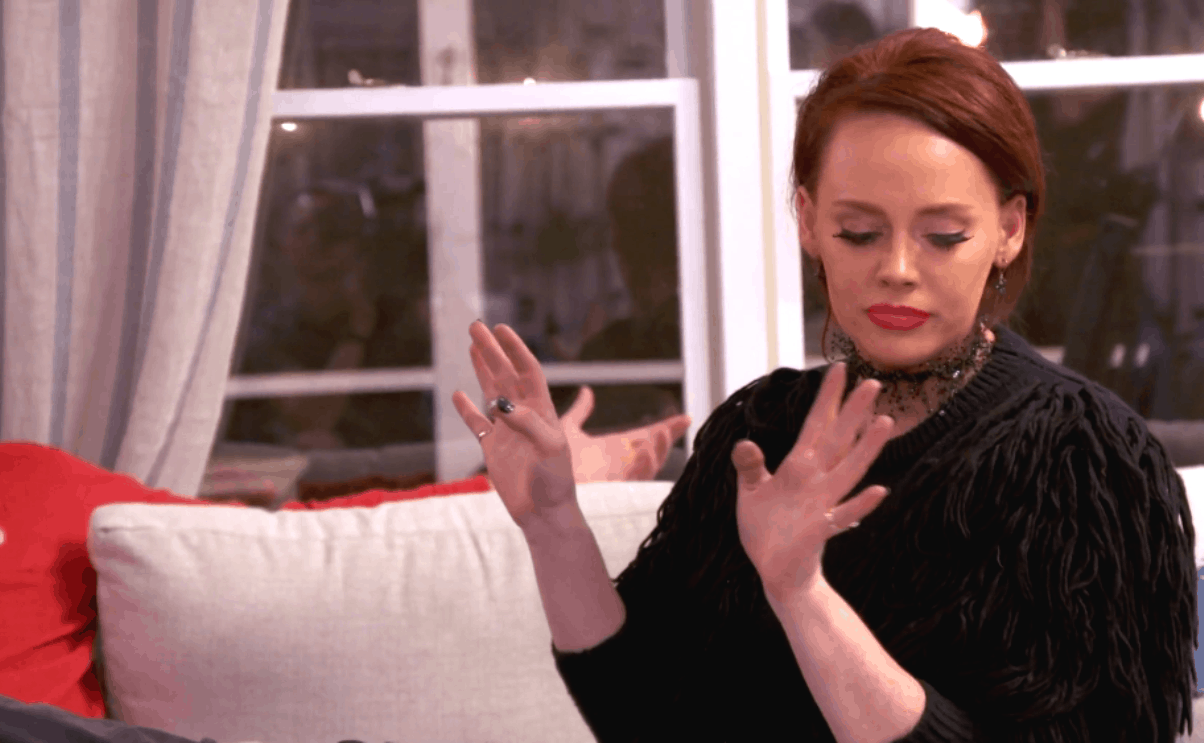 On this episode of Southern Charm, the ladies are still in the treehouses. Still dealing with tension…all because Danni felt the need to check in on Kathryn’s sanity and well-being. Yea, I know—how DARE she?! (note the sarcasm).

You can tell right away that Kathryn is peeved. Danni tries to smooth things over with her, so they head to the fire for some “alone time.” Back in one of the treehouses, Naomie, Cameran, and Chelsea talk about how awkward things got over dinner. They can’t believe how sensitive Kathryn became when Danni called her out.

Danni tries to tell Kathryn that their friendship is hard because she feels as though Kathryn “disregards” her feelings sometimes. Kathryn remains stoic as Danni becomes emotional, and Kathryn “cannot even fathom feeling bad about it” because of all the personal issues going on in her own life. Ouch.

The next morning, Kathryn awakens with a full face of makeup and is feeling “betrayed” by Danni. It’s strange how she is twisting this and making Danni the bad guy, right?! In the meantime, Cam and Chelsea chat over some breakfast. “I absolutely count the clock when Jason is not home.” Ok, Cam, we get it. You are not thrilled with being a stay-at-home mom, but you are still a mom. She should really start enjoying it before her kid is all grown up.

Back in the real world, Craig is still sound asleep at 12:47, whilst his “operations manager” attempts to put this boy-child’s life in order. Craig, a self-proclaimed “not a good-waker-upper,” eventually joins Anna Heyward for some pillow talk (lol). She lays into him about being responsible.   What else is new?

Austen has emerged from his break-up black hole just in time to play golf with his dad…aka: put some golf on his dad’s tab, cuz let’s face it, Austen is struggling these days. Austen’s dad tries to give him some advice as his son’s life seems to be spiraling out of control. Austen is feeling a bit judged by his parents CUZ THEY ARE CONCERNED ABOUT HIS LIFE. I mean, first his beer business tanks and then he loses his girlfriend.

Ok, someone tell me how Madison falls into Patricia’s life?! Evidently, Patricia has known Madison for “over ten years.” Man, this is an incestual group, huh? Patricia prods to find out the latest about Madison and Austen’s relationship and tries to follow the grimy tale of revenge sex and threesomes. As the ladies toast, Patricia tells Madison, “I think you need a little snort.” Um, Patricia? What is on YOUR mind?

Meanwhile, Austen tries to explain to his dad that Madison is not as sweet as she comes across. To that, his own father basically asks Austen why he is such a mess. Oh God—Austen’s parents saw THE video?! How do you make eye contact with them? How do you sit down together over Thanksgiving dinner?

Shep‘s at a bar. Shocker. Anddddd so is his right-hand man, Craigory. Craig talks about his pillow business and tosses around the idea of having a “pillow party.” Shep looks like he’s gonna hurl at the thought of it, but gets over it fast cuz he has some tea to spill. Shep tells Craig the newest gossip: Chelsea is p*ssed at Austen for talking smack about her to Madison. On top of that, Craig lets Shep know that Austen was second-guessing the break-up. Craig states, “It’s like we are handling a middle-schooler” (says the man who sleeps half the day away and has to have a stranger keep his life in order). Shep suggests the guys plan a trip and Craig jumps on the bandwagon cuz neither one of these guys have any true responsibilities in life.

Chelsea stops over at Naomie’s house and they talk about Craig’s pillow party. Naomie shares that she will not be attending said event.  The girls have no idea what this party is all about. And let’s be honest, Craig himself has no idea what the party will entail because he doesn’t even know what planet he is on. More importantly: Why is Naomie afraid of her 12-year-old neighbor?

I just love it when Bravo brings in the parents to spice things up a bit. This time, we meet Danni’s mom. She’s adorable and just like any other mother, she gets right to the point and wants to know what’s going on with Danni’s love life. Danni fills her mom in on Gentry, but her mom doesn’t wanna hear it. She’s more concerned about Danni freezing her eggs. TMI.

Kathryn’s outfits this season are OUT of CONTROL. The shiny white Spandex, the blood red lips. It’s all too much. She meets up with Craig at a fabric store, but she immediately starts sobbing once she sees Craig. As Kathryn breaks down, Craig retorts, “We’re surrounded by pretty fabric,” as if that will cheer her up. This whole Thomas Ravenel business is really knocking Kathryn for a loop and it seems like even “Frozen” can’t save her. After she gets her sh*t together, Craig and Kathryn fabric shop and it’s pretty ridiculous.

It’s the day of the pillow party. All I know is that I’m coming solely because there are Chick-Fil-A nuggets. Craig is zero help setting up with event cuz he is too busy sleeping/applying makeup. Craig believes, “I think I look cool wearing eyeliner and I think girls like it.” Craig is certainly no David Bowie OR Johnny Depp, but he sure thinks he is.

Cam is the first to arrive, followed by Whitney. Cam retorts, “I hope that Whitney can get contacts soon because I can’t look at him,” without thinking about him banging Kathryn with his glasses on. LOL. No one is quite sure what the point of this party is, but Whitney looks perturbed being in a house that has no napkins or ice. When Austen enters, you can tell that Chelsea is beyond over him.

Cam doesn’t think that Craig actually makes these pillows, and Whitney wants to know, “How do you keep a passion about pillows?” They are literally sh*tting all over Craig at his own pillow party—how rude! Later, Craig and Shep invite Austen and Whitney on the RV excursion to Nashville and the guy trip plans are loosely made. Side note: I cannot believe that Patricia is actually stepping foot in Craig’s house. Did she bring Michael, her butler? Craig sure could use some of his help…

There are now two brooding ladies in the house when Kathryn enters. She is still salty towards Danni, and Chelsea is about to let Austen have it. When Austen and Chelsea are left alone, Chelsea lets Austen know that she knows he’s been talking sh*t about her to Madison. Chelsea doesn’t wanna hear it when Austen claims it was a drunken mistake. She demands to know why Austen talks about her boyfriend and her sex life.

While this is going on, the gang watches the drama unfold from the next room over. I think it’s hysterical how Shep is trying to explain to Patricia that you can screenshot a conversation on the phone and that is how Chelsea has found out this information. Austen just lays down and apologizes. The duo makes up and at least one issue is resolved.

Danni is happy that Chelsea and Austen are ok now, but you can tell Danni is bummed that Kathryn won’t even talk to her ever since the treehouse trip. Kathryn sashays over and only hears part of the conversation. She in turn gets livid upon hearing her name and storms off to hang with the guys. Shep questions her: “What’s wrong? I thought you guys were friends.” Danni attempts to talk to Kathryn, who is acting like a 4-year-old having a temper tantrum. SHE doesn’t even know why she’s mad at Danni, really.

Danni shrieks at Kathryn, “You’re a f*cking joke right now” before running outside. Danni is crying on the steps and Chelsea insists that Kathryn go talk to her. Kathryn is as cold as ice and refuses. We are at a stalemate, folks. Kathryn goes over the edge when Shep gets involved. He tells her, “You can’t get angry at people’s general concern for you.” Wow…Shep, that might be the only smart thing you have ever said! When will Kathryn ever learn?