Southern Charm Recap: Ashley Apologizes For Her Past Behaviors, But No One Is Buying It 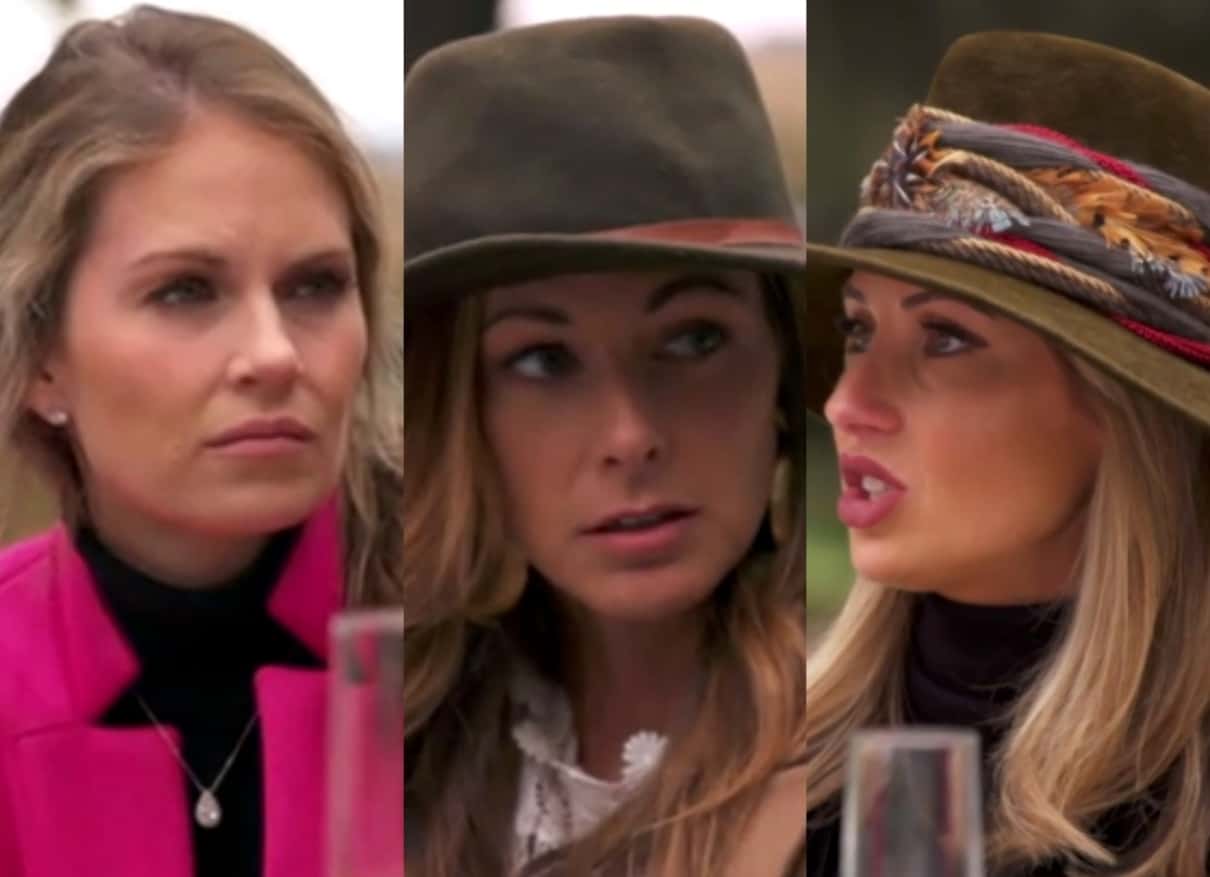 Ashley Jacobs is back and she is shaking things up on this episode of Southern Charm.

Enter Eliza. We are also graced with the presence of her momma. In case you forgot, “Being a Limehouse in Charleston is a big last name to handle.” Eliza “claims” that she “works” at all of the hotel properties that her family owns, but I’m getting kinda tired of all these rich kids riding on their parents’ coattails.

Eliza shares with her mom that she is hosting a skeet shoot/southern brunch…whatever that means. Mom is not pleased with Eliza’s choice in a much older boyfriend, as he is a “Yankee” and does not quite fit the southern mold Eliza’s perfectly coiffed mom had in mind for her daughter. I mean, her dad is a total troll who cheated on her mother, so there could be some daddy issues brewing when it comes to Eliza??

The night after Cameran’s birthday party, Naomie meets up with Cam for a pedicure. Cam doesn’t waste a minute and tells Naomie that during a late-night talk, “Craig just let it all out about you.” Cam spills the beans about EVERYTHING Craig drunkenly said about Naomie, up to and including how Craig loves and hates Naomie. Naomie scoffs at this and states, “I just think he lives on a different planet.” Cam suggests that Naomie have a sit down conversation with Craig to make it perfectly clear that the relationship is over and to give the guy the closure he needs.

In the meantime, Craig joins Shep and Little Craig (the dog) for a lovely lakeside stroll. How romantic. Craig relays that Naomie refuses to attend Cam’s Colorado birthday trip because of HIM and finds it blasphemous. Surprisingly, Shep offers the same advice as Cam and feels as though to ease any awkwardness, Craig should just be a grown up and talk to Naomie about the elephant in the room.

Kathryn, Chelsea, and Austen are attending a  barre class. Naturally, Austen makes a cheesy joke about it not being the type of bar he is used to. Austen moans and groans in his khakis, but somehow manages to power through what appears to be a 10 minute class. Afterward, Chelsea, who has apparently taken on the role as Austen’s second mommy, needs to know if Austen has been in every night by 11. I don’t get why she’s so invested in his curfew and lifestyle changes, but it seems very forced. Chelsea asks the crew if they are all attending Eliza’s brunch. Kathryn cannot come (lucky her!), but Chelsea has a momentary panicked thought: “You don’t think that Ashley would show up to the skeet shoot, do you?” I smell a perfect set-up… and it appears as though my instincts are correct.

Whilst driving, Eliza phones her apparent BFF, Ashley. You all know the one. Thomas Ravenel’s ex-girlfriend. You read that correctly. Ex. The couple has split since the allegations surrounding T-Rav surfaced, and the ever-inclusive Eliza has decided to invite Ashley to the skeet shooting brunch. What a doll. Also, what a way to shake things up, amiright?

Later, Shep and Cam get together and concoct a plan to try and convince Naomie to attend the Colorado birthday trip. The minute Naomie sits down, Cam jumps all over her about coming to Colorado. Naomie explains that she is not going because the whole situation makes her new boyfriend, Metul, uncomfortable. LAME. Cam and Shep throw in that, “It’s a bad way to start out your relationship with parameters.” Of course Cam can say that. She never sees her hubby… Shep suggests that Naomie talk to Craig at the skeet shoot event. Time will tell.

Over at Patricia’s house, “dapper” Whitney in his sports coat greets Austen and Craig. The fellas chow down on food so as not to overindulge at the brunch. Are they dudes or 40-year-old women? Airy Hall, a Limehouse plantation, is the perfect setting for Eliza’s skeet shooting brunch. There are banjos, some BBQ, and Eliza’s 45-year-old boyfriend. It’s a real party! It appears as though Shep took a cue from Chelsea and has jumped on the ridiculous hat bandwagon. Who styles that guy?! The whole gang arrives and Craig and Naomie even HUG. I am LOLing at Whitney skeet shooting in his all-black “very New York” ensemble. The guy can hardly move his arms in that tight coat.

Things seem to be going well until meddling Cam finds Craig and forces him to revisit his drunken feelings about Naomie. As if on cue, Naomie jumps into the convo and asks Craig to come talk to her. Craig is the first to break the ice. He very maturely tells Naomie that he would hate to be the reason she doesn’t attend the trip, but Naomie makes it clear that along with her new nose, she has a new man and she plans on keeping it that way. I am more concerned with Craig’s blue painted fingernails than I am with the whole “I don’t want to disrespect Metul” thing. Craig feels much better after chatting with Naomie and seems to have that closure he spoke about. Now let’s see if he can stop himself from crying about her after too many drinks.

“The Christian thing to do is to forgive and forget.”- Eliza Limehouse. That is her reasoning for inviting crazy Ashley to the brunch. When Ashley makes her entrance, it’s as if the whole party stops. Ashley is thinner than ever and even more fake than last season. Everyone is awkward AF around Ashley, and they scatter like roaches as she approaches. Shep is the only one to actually strike up a convo with Ashley, and he asks her point blank if she is still with T-Rav. #classic

When Whitney bumps into Ashley near the bar, he states, “I know you talked some sh*t about my mother…” Whitney calls Ashley delusional, and Ashley says that she has “nothing kind to say about Patricia.” Ouch. Ashley continues her uncomfortable tour as she plops herself down at the table with Danni and her friend, Madison. Ashley doesn’t want to talk about things that happened in the past—ie. social media posts that occurred like…last week. As Madison reminds Ashley of her mean words, Ashley threatens her to, “Shut your mouth.” Clearly we are still dealing with the same wacko Ashley and I love it—at least she is adding excitement to this boring brunch.

The next table for Ashley to infect features Chelsea, Cam, and Austen. As soon as Ashley begins her canned apology, Cam blurts out, “Why did you tweet the other week and say that we were all losers?” Go, Cam. Confront the crazy. Ashley claims there’s a lot more that we don’t know about Patricia and she rambles on a mile a minute about how Patricia tried to turn her against Kathryn. What?! How did she get to that topic?! Cam brings her back to the original question at hand. Like a pro, Ashley avoids and deflects. Her specialty.

No one buys Ashley’s sob story, particularly because just the other night, when she ran into Naomie, she evidently called her a b*tch in the restaurant. Upon being reminded of this situation, Ashley shrieks, “Bring her [Naomie] over here. The reason I called her a b*tch is because she was a b*tch.” Ashley hasn’t changed one bit.

I love how Eliza just sits back and pretends to not hear any of the drama that Ashley is creating. Way to go, girl. Ashley feigns a few tears that even Austen doesn’t buy. No one can believe a word that comes out of her mouth and it is incredible that she remains glued to her chair. Like, get up, Ashley! When Naomie comes over to the table, Ashley laments, “My intentions were only good.” I’m sorry, what?! Maybe Ashley is from the same planet Craig lives on…you know, the one where everyone is against you and you can’t do anyyyyyyyyything right. HA!