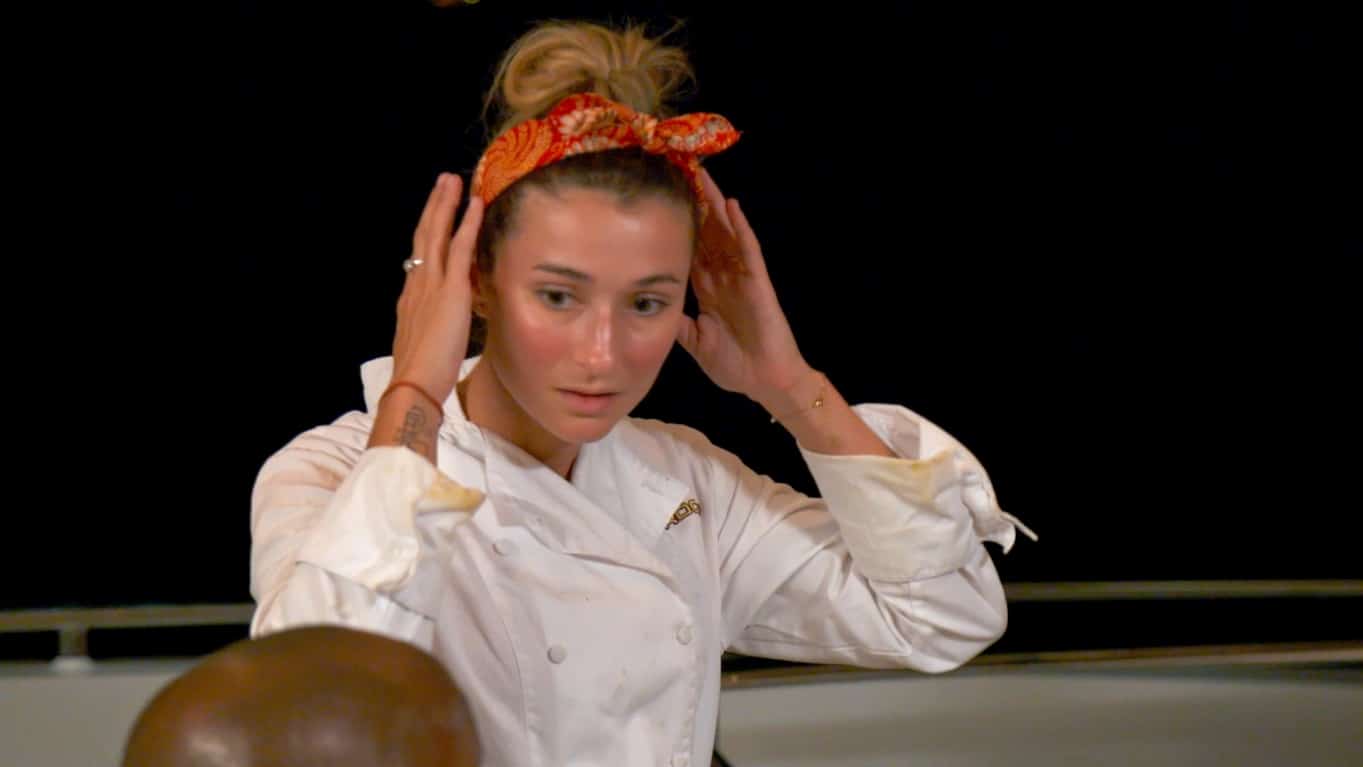 On this episode of BelowDeck Mediterranean, Anastasia is out to prove that she really is a chef, but Captain Sandy is starting to question her abilities after complaints are made…

It’s the final charter day in Port Camille Rayon, and the crew is waiting to hear the opinions of the charter guests. You know it’s bad when the guests start out by saying, “You wanna really know the truth?” Ouch. Even I’m holding my breath. Service: 5 stars… but the breakfast, man…the breakfast was not on point. Johnny and his beaded necklace was perturbed by the mediocre meals. Why didn’t they come to Captain Sandy sooner? They’d rather just grin and bear it and THEN complain after the fact?!

As they bid their goodbyes to the picky Americans, everyone crosses their fingers that the tip envelope is hefty. BTW: Joao warming up to Hannah is kinda freaking me out. I liked it better when they hated each other… Does anyone else feel like Captain Sandy always starts the tip meeting by saying “this has been the most challenging charter yet?” Despite any snafus (…bad food…cough, cough), they manage to get a pretty sizable tip and get informed that they’re in for a real treat tomorrow. The crew is off to the Monte-Carlo Bay hotel for the day! #Jealous

Whilst everyone gets pumped for tomorrow’s hotel visit, Captain Sandy breaks the news to Anastasia about her less-than-stellar food. Anastasia takes it personally and nods along as Captain Sandy essentially tells her to shape up or ship out (lol). With that, the crew is left alone for a night off on the boat. This means only one thing: copious amounts of alcohol.

Everyone is taking full advantage of the booze on board, and Hannah confronts Joao about his “jealousy” comment. The other night, Joao mentioned becoming jealous of Travis and Hannah, so naturally, Hannah needs to get to the bottom of the remark. The flirtation is quite gag-worthy…as Hannah desperately needs approval from just about every man on the yacht.

The next morning, the crew heads out in Monaco. This hotel is absolutely ridiculous. The views. The cars. What kind of day off is this?! Awkward June claims that she wants to open up more to the crew and thinks that today is “gonna be yachts of fun!” Um, June. You’re not gonna make ANY friends if you continue to say cheesy one-liners like that.

Poolside, half of the crew acts like spring breakers and the other half attempts to be grown up…that is until they begin playing beer pong. It’s evident that Joao has made up his mind about having ANY feelings for Hannah: “Seeing Hannah with Travis—light switch off. I’m out.” Anddd she’s out. Why is this like a 7th-grade dance? Aesha and Jack are making out. Travis and Hannah are canoodling. And the rest of the group is busy being “just friends,” playing beer pong. Joao is mortified by everyone’s behavior, and when Aesha comes prancing out in her dinner attire, he essentially tells her that she looks like a Russian prostitute. I mean, he’s not entirely wrong…

Ew. Hannah just said that the guy she’s been smooching reminds her of her older brother. What an odd thing to say. She further states that Travis has a drinking problem and that passing out at the Monte-Carlo Bay hotel at 4 pm is straight-up rude. Travis is being disrespectful and embarrassing, but I think that Aesha is a little bit crude, too.

Aesha is catching on that Joao looks at her with judgey eyes, but can you blame the guy? She was scratching her lady parts and eating with her mouth full. Joao tries to psychoanalyze Aesha and explains to her that he sees another side of her—one that is softer, but has been through “things.” Aesha seems to accept Joao’s “apology,” but she’s too wasted to have a clue what’s actually happening.

In the meantime, Hannah berates Travis and tells him he should practice a little something called self-control. She’s p*ssed that she had to babysit a drunk 26-year-old. Post-dinner, Travis, Jack, and Aesha discuss Joao and his judgmental ways. Travis is annoyed that Joao is picking on Aesha, as he feels like she is his family now.

Bright and early, Captain Sandy calls to speak with Hannah, Joao, and Anastasia. It’s time for the next charter—a charter planned to “cut loose and have fun” for the guests. Who are these people?

In the meantime, Colin attempts to correct Travis, as Travis believes that Joao overstepped with his treatment of Aesha. Interesting that Travis is not addressing his black-out drunk behavior, but instead focusing his attention on “protecting” Aesha from Joao. I don’t get it. The boys essentially agree to disagree and que sera, sera.

The all-dude charter guests arrive, and Verne, the primary, introduces himself and his guys. This group looks ready to party and I love it. I mean, they even start dancing when the boat pulls away. How awesome? Anastasia is feeling the pressure of this charter and tries to wow the guests with her menu, but right off the bat, there’s an issue. The food isn’t even hot and Captain Sandy’s frustrations are escalating.

Aesha and Travis flirt incessantly, June ignores her radio calls from Hannah, and Anastasia is slaving away in the kitchen…praying that this course of food goes over better than the last. When the charter guests begin pounding on the table demanding truffle fries, I know that Anastasia is dropping the ball. Good thing the fries are delish…they only took 14 years to fry up.

Watching these grown men on the water toys is pretty incredible…except they push it just a little too far. They didn’t follow the 500 meters rule and are FLYING around small boats, thus causing the water police to get involved. Captain Sandy sends Joao out to reel in the maniacs on the jet skis in and luckily, the guests take the news well and there appear to be no arrests.

What is with the cold food?! Anastasia swears that when she plates the food, it’s hot, but evidently, when it gets carried upstairs through Antarctica, it magically turns cold. The next thing you know, someone else is complaining that his fish has no flavor and Anastasia is starting to get defensive.

Captain Sandy notices that Anastasia is straight-up full of excuses. When Anastasia comes up from the kitchen to talk to the guests, she immediately regrets her decision. The guests tear her apart. The hair on the key lime pie is the icing on the cake. Anastasia looks like she wants to crawl under a rock and Captain Sandy, well, you can see disappointment written allllll over her face. Maybe Anastasia isn’t a true chef after all…

TELL US – THOUGHTS ON THE BELOW DECK MED REUNION?