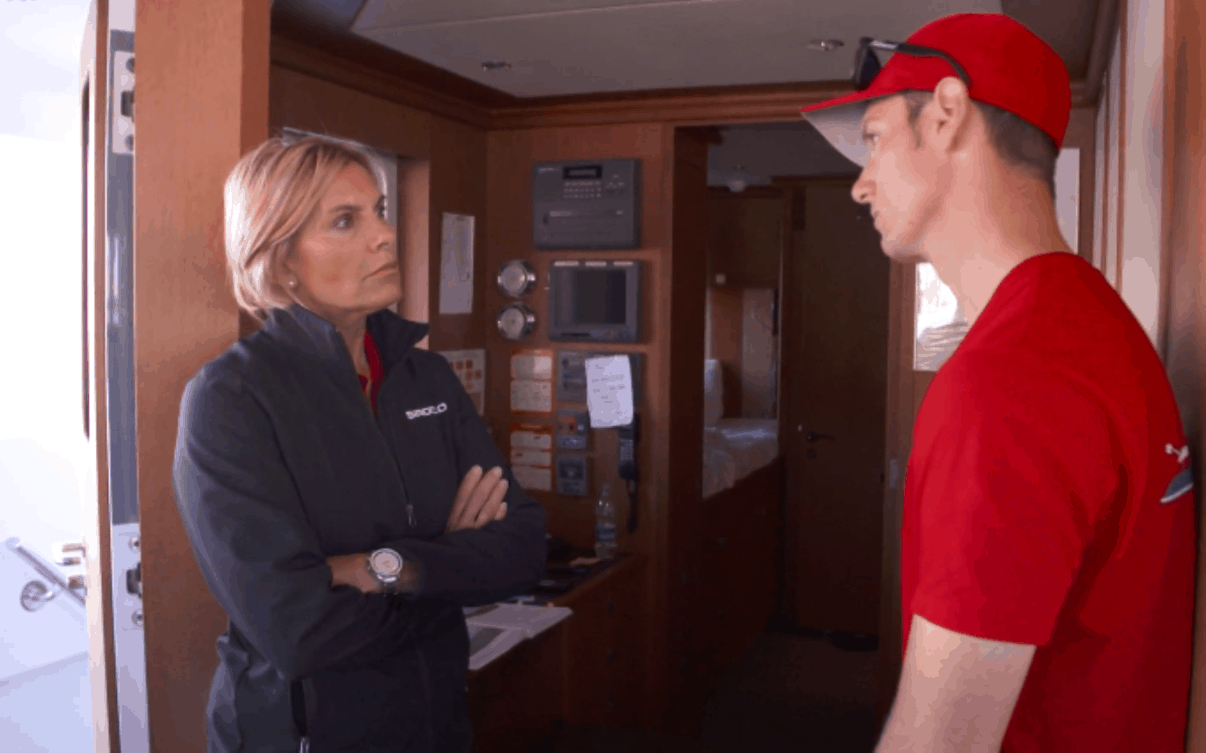 On this episode of Below Deck Mediterranean, a rash decision may change the dynamic of the crew for good…

Cheesecake with a side of hair on the plate. Delish. Way to go, Anastasia. She denies that the hair is hers, because that’s what she does best. After dinner service, Hannah tries to poach Anastasia and get her back to the interior. It looks like Anastasia is starting to crack as a chef. Her stress is reaching the next level.

On the second day of charter, Anastasia made for me… a breakfast spread on the extra rocky sea. In the meantime, Joao berates Jack for his half a*s “work ethic.” Joao straight up tells Jack that “we need to speak about you being quiet.” He has had it with Jack’s lackadaisical attitude, much like the charter guest who has had it with the rocking boat. Holy puke! The guy even barfs on “Lou the cameraman with unfortunate timing.” LOLOL. And then Aesha with the “I lost my spewginity.” Hilar. Also hilarious is June’s stupidity. Homegirl can’t tell time!

Hannah and Travis steal a moment to talk about things. Mainly about Travis’s excessive boozing. Hannah believes that she can’t be with a guy like him, and Travis explains that he drinks in excess because he misses his family back home in Australia. He hasn’t seen them in two years.

It appears as though the guests are turnt up for the impending Mardi Gras party dinner. They take their sweet old time settling in for dinner, and they’re quite a rowdy bunch. Once everything is consumed and the guests have left the table, Anastasia gets to hear how they enjoyed her cooking. The problem with Anastasia is that she does not admit when she’s wrong. She’s full of excuses and loves to play the blame game. After service, Hannah holds a meeting with Anastasia. She tells Anastasia she “doesn’t have anything to prove anymore,” and she can tell that Anastasia is stressed. It’s a matter of time before Anastasia waves the white flag.

The last day of charter rolls around, and June finds herself in a smoky kitchen. Instead of doing something with the smoking pan, she proceeds to juice oranges. June was probably practicing reading a watch. Eye roll… Later, Joao is reiterating his initial point about Anastasia’s role as the chef on board. Anastasia essentially tells Joao that she’s not ok and that she kinda wants to give up the gig.

As they bid their farewells to this raucous group of dudes, the crew holds their breath for the big tip envelope. Captain Sandy calls the previous charter “wild,” but we all know that the crew didn’t quite hit the mark this time around. According to Joao, “bad food means bad tip,” and the guy’s not wrong…

After the meeting, Anastasia comes clean to Captain Sandy and admits that she feels like she has “bit off more than” she can chew. Anastasia further states that she is experiencing high anxiety and therefore no longer wants to be stuck down in the galley. Captain Sandy handles this news rather well and tells Anastasia that she’ll check to see if another chef is available for the next charter.

It’s a night out for the crew and that means one thing…time for everyone to get lit. Aesha, Travis, and Jack are well on their way to wasted land. Hannah gets so disgusted by Travis and his drunken antics, but she still wants to save him. I feel like nights out are always a bit cringey. For instance, watching Colin trying to mac it with awkward June. He chats it up with her over dinner and they commiserate about missing home. In the words of Colin, here’s to hoping June realizes “how handsome my mom says I am.”

I love how Joao is like the wise old sage this season. He feels “protective” of Hannah and believes that Travis is bringing her down. When Hannah excuses herself to talk to Travis, Jack interrupts the conversation and that’s the end of that.

When Travis returns to the table, he finds a resting Anastasia next to him. With that, Travis, ever the gentleman, straight up slaps Anastasia awake. First, he slams Aesha’s face with the car seat on the way to dinner, and now he SLAPS Anastasia?! What is wrong with this guy? Joao becomes enraged by this action and jumps to defend Anastasia. Travis claims it was a joke and tells Joao to “p*ss off.” He slurs that it was no big deal. Anastasia, however, has dated alcoholics before and becomes immediately upset. You know the situation has escalated when Colin actually raises his voice at Travis. Naturally, Aesha and Jack defend their boy and feel as though Joao is a “pr*ck.” Interesting to see the two teams forming with this crew.

Um, why is Jack standing butt naked giving Travis a pep talk the next morning?! Travis finds Anastasia first thing and apologizes. Despite not fully understanding why Travis actually decided to SLAP her the night before, Anastasia flippantly tells him that things are “all Gucci.” Travis is clearly on an apology tour. He talks to Colin next and hopes that things can be ok between them. Even though Anastasia told Travis earlier in the day that things are ok between them, it’s been eating at her. She decides to call Travis out for his belligerent behavior: “The fact that you were so drunk…is not ok…”

She lets him know that she’s sick of his actions and enough is enough. Travis basically rolls his eyes at her because he doesn’t see a problem with the way he acts and doesn’t want to be called out as a “woman beater.” Anastasia makes it clear that she wants Travis to get his drinking under control because he turns into a different person when he’s drunk. He gives Anastasia his word that nothing like the infamous slap will ever happen again.

Before the next charter guests arrive, Captain Sandy calls June to the bridge. Unfortunately for June, she has been chopped. A new chef is coming aboard, and that means Anastasia will get her old position back. Captain Sandy lets June know that because Anastasia “did her a favor stepping in as chef,” she will be getting the role as third stew. Which means…June is getting the boot. June looks devastated, and this is the first bit of emotion I’ve seen this chick give. Captain Sandy reminds June that this isn’t personal and that it’s strictly business. What an uncomfortable situation.

To make matters worse, Captain Sandy asks Joao and Hannah to essentially give June a pep talk. June sees right through it. “Hannah doesn’t give a rat’s fat a*s about the situation,” and she tearfully says, “no hard feelings.” She looks P*SSED and I don’t really blame her. When Colin finds out that June is getting taken off of the boat, he becomes all emo and suggests he quit to open up his spot for her. How valiant of him! Who says romance is dead?!

Colin further tearfully explains that he doesn’t really have the passion for yachting like June does, so therefore he may make the decision to leave. Joao basically begs Colin to stay, but he knows that Colin is a great guy who would simply follow his heart. Colin calls this sacrifice “bittersweet,” as he’s happy to heading home, but he’s sad about leaving. He radios Captain Sandy, and then we’re forced to wait and see what happens until next episode. Talk about a cliffhanger.

TELL US – THOUGHTS ON THE BELOW DECK MED?