Home Below Deck Below Deck Mediterranean Recap: There’s a New Chef On Board

Below Deck Mediterranean Recap: There’s a New Chef On Board 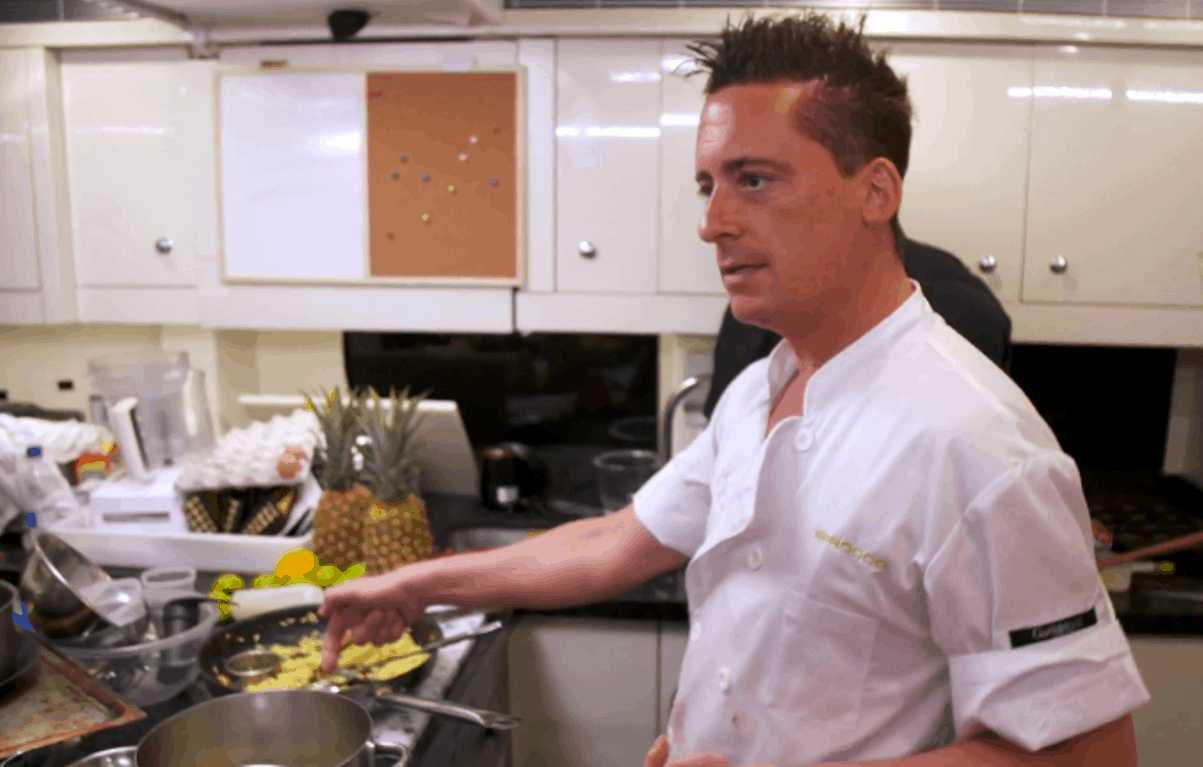 I actually can’t tell if the emotional Colin is doing this whole “I should go and June should stay” act because he’s truly exhausted of that #yachtlife, or if he’s just trying to impress June and get a girlfriend out of the deal. Colin runs to Captain Sandy and gives her the song and dance regarding June. “She has a passion for yachting,” blah, blah, blah…Captain Sandy internally freaks the f*ck out when Colin shares his idea of leaving. But then, she pumps up his ego, and in the end, Colin stays. Well, that was short-lived!

When June hears that Colin stuck his neck out for her, she becomes emotional…but I still don’t think she wants to date him. LOL. Everyone is thrilled Colin is staying, but Travis gets the short end of the stick. He gets stuck rooming with the new guy, and as for Jack, well, he’s set to bunk with Aesha. Ya know, the girl he’s been hooking up with on the yacht. Hannah sort of relishes in the potential uncomfortableness of the whole situation. She states, “I’m either speeding it (the relationship) along or I am dooming it.” Only time will tell if Jack gets tired of Aesha’s crassness or Aesha gets tired of Jack’s lazy dude attitude.

June says goodbye to the few crew members that she actually likes and still beats herself up about not making friends right off the bat. Once she departs, everyone breathes a sigh of relief. The mean girl trio, Aesha, Hannah, and Anastasia, are thrilled to be reunited. Aesha is also pumped that Jack is “moving in,” despite them never actually having sex yet. The crew preps for the next charter…and for the new chef.

Chef Ben is back, ya’ll. Looks like Hannah’s dream team has gone straight to hell. These two have a history…turns out they worked together three years ago. According to Hannah, Ben is “all about extremes.” Since Greece, Ben has been catering and travel-cooking for people all over.

Poor Anastasia can’t seem to be set free from the galley. Anastasia is stuck giving Ben the run-down in the kitchen, but she’s over the moon that the chef responsibilities are off of her shoulders. In the meantime, Aesha and Jack are loving this move-in. Jack explains, “I’m dying to have sex with her. I can’t wait.” Dream big, man.

Captain Sandy calls for a mini-meeting to discuss the upcoming charter, which seems like a bunch of woo girls just looking to have a good time and a whole lotta wine. Ben is complaining that he is “cooking blind,” as he has no chance to learn the ropes before these cougars come on board. These women arrive ready: luggage galore and shots of tequila within minutes. Looks like the crew is in for it.

Ben is now a bumbling idiot in the kitchen. Luckily, Anastasia is there to hold his hand and guide him through service. While they sweat away down below, the guests hit on the deck crew, and it is cringeworthy. It appears as though they have forgotten they are triple the age of Joao, Travis, Colin, and Jack. The ladies not only oooh and ah over the guys…they are LOVING the meal. Looks like Chef Ben set the stage perfectly. The women warn Ben, “If we don’t like dinner, you get a spanking!” Oh boy.

The guests are pumped full of booze and play golf off the side of the yacht as Aesha and Jack bump and grind, but don’t do the deed, in their cabin. To be honest, there’s not nearly enough drama in this episode. I mean, big whoop. Anastasia washed a dry clean only dress and one of the burners doesn’t work? #dealwithit. Since stepping foot on board, Ben only complains. Hannah gets reminded that Ben’s energy is super negative, and he freaks out when the guests begin sitting early for dinner. Side note: how many times did Anastasia say she’s feeling “rusty?”

The charter guests imbibe heavily and are incredibly intoxicated by the time dinner rolls around. The wheels are falling off by the time the food arrives at the table, and I feel like I am experiencing déjà vu. The ladies begin complaining about cold food, and as that unfolds, there is a bigger issue. Some rando comes up to the yacht returning the tender. What?! Captain Sandy is FURIOUS that the boat simply floated off and demands to know which knucklehead on deck was responsible for this snafu. Travis kinda/sorta admits to it and I will be kinda/sorta shocked if he still has a job after this charter. Maybe they will bring June back???

TELL US – THOUGHTS ON BELOW DECK MED?