Home Below Deck Below Deck Mediterranean Recap: Aesha and Jack Take Their Relationship to the Next Level

Below Deck Mediterranean Recap: Aesha and Jack Take Their Relationship to the Next Level 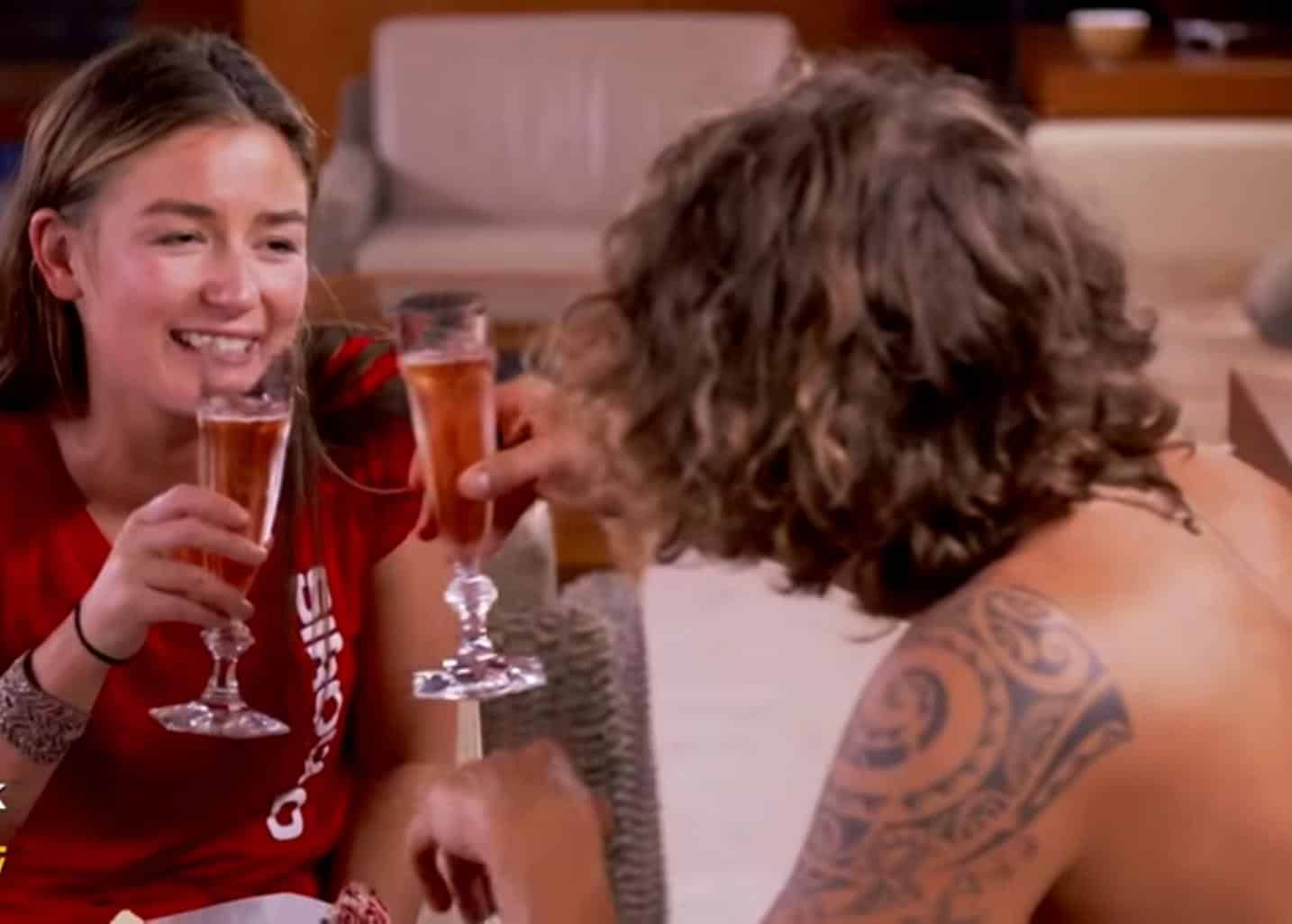 Four more days left of the charter season! On this episode of Below Deck Mediterranean, the Sirocco crew is counting down the working days as they get put to the test.

The crew is getting tossed around. The pots and pans are flying. And Hannah is essentially giving a pressure point “hand job” to one of the charter guests. Luckily, Captain Sandy steers them out of the rough seas, but then her expectations are raised. It’s as if Captain Sandy felt like she was too nice to the crew this entire season, and so now she is unraveling and being harsh with them to make up for lost time. She is requiring all water toys be brought out and is very demanding in the way she looks to have this come to fruition.

The stews prep for the white party that will be occurring later this evening, and the deckhands are hustling to fulfill the captain’s orders. These days, Travis  and Captain Sandy seem to be BFFs after the drinking conversation. I mean, the captain really opened up to him about her sobriety, so maybe they are next level friends??

While Joao is dragging some of the guests around on a jet ski, it straight up dies. Right there in the middle of the water. Talk about an awkward situation. Whoops. Captain Sandy is livid, and I bet if Travis had that happen to him, she wouldn’t be so terse with her words.

Hannah, Anastasia , and Aesha are trying to think up creative ways to satisfy Captain Sandy’s insatiable need for lavish table-scapes and impeccable service. Aesha suggests white glove service to Captain Sandy, who practically jumps for joy upon hearing this idea. But when Aesha asks Hannah, Hannah retorts, “I think white glove service is extremely old school.” Dueling opinions. Nevertheless, Captain Sandy is underwhelmed with the girls’ white party display. “Looking at the table it’s not what I expected. I need the ultimate five-star experience on the table.” Like I said, it seems like the captain is just looking to take out her frustration, anger, or moodiness.

The white party is about to start, and Chef Ben is taking it to the next level. I mean, the guy is really jumping into this white theme–he even ground up WHITE pepper. Is that “five-star experience” enough for you, Sandy?? In the meantime, Joao and Colin are stuck troubleshooting the jet ski. Captain Sandy pays a visit to the guys and shouts out orders and things Joao and Colin should check to figure out the cause of the jet ski death. Joao is a bit snarky to the captain and talks back to her, a huge no no. Captain Sandy can’t understand why Joao acts like such a know-it-all and she claims that his condescending tone is p*ssing her off. But I feel like everything is setting her off right now.

Once Captain Sandy is done jumping down Joao’s throat, Jack enters, and he has something very important to discuss. “Off topic, I want to ask Aesha to be my girlfriend tomorrow.” Jeez, Jack. I feel like I am back at some seventh-grade dance. Jack even enlists Colin to compose a rap to belt out during the heartfelt moment. Kinda cute? Kinda weird? Thoughts?

The next morning, Ben is salty that no one is available to help him with service. He huffs and puffs in the galley, and I am beginning to wonder, is Hannah becoming the next June? Why is homegirl not answering her walkie when Ben calls for her? Everyone is becoming frustrated with each other, and they are all raw nerves. Only four more days of working together and dealing with each and every quirk, but it hardly seems likely this group will be able to hold it together for that long.

Before the tip meeting begins, Jack begins operation Ask Aesha Out. He spray paints a sheet with, “Will you be my girlfriend,” and he proceeds to spray paint his body. Um, does he realize that spray paint doesn’t simply wash off? It’s not like a temporary tattoo or a Crayola marker. Was it really worth a permanent question mark on his belly? I guess if you’re gonna do it, ya gotta go big, right?

During the tip meeting, Captain Sandy is going hard. She calls out Joao for talking back and the girls for their lack of support with service. Captain Sandy then asks, “By the way, how did the white glove dinner go off?” Hannah gets reamed out for squashing the white glove idea, and you can tell Captain Sandy is annoyed because she is talking in third person. She means business. Hannah is not used to her boss clapping back at her, and she looks totally uncomfortable. Captain Sandy is not happy with the interior, and she makes it clear that there is a disconnect on the ship when it comes to the service. She is insisting that charter nine be the best one yet…or else.

Everyone’s feeling pretty lousy after getting ripped a new one by the captain. Joao, Hannah, and Ben have to suck it up and sit by Captain Sandy to read the next charters’ preference sheet. Hannah is really feeling the pressure to make this charter a successful one in the eyes of the captain, and so she suggests that the girls stay on board to find theme décor while the rest of the crew goes to a group dinner. Naturally, party girl Aesha puts up a fight about this and Hannah allows her to go, but Anastasia takes one for the team and hangs back with Hannah.

Before dinner, Jack is set to ask the big question. This is nicer than some wedding proposals I have seen!! It’s quite funny how the crew (minus Ben…) is in on the whole “make Aesha Jack’s girlfriend” thing. Colin is the decoy. He is the guy who gets Aesha from her bunk and drags her out to begin step one of the stealth mission. OMG Colin’s rap makes me cringe. It’s essentially just a poem that he kinda puts a beat to all about Aesha. Aesha just stands there with a dumb smile on her face when Jack pops the question. Anastasia and Hannah are filming this through tears, and I am basically just waiting for Aesha to ask them to be her bridesmaids.

Check out Hannah and Anastasia scouring the ship for tacky decorations! They are busy looking for Moulin Rouge and Great Gatsby décor as the rest of the crew heads out into the rainy night. Aesha and Jack break off from the group and have their own romantic date night now that they are bf/gf, duh. In the meantime, the dudes sh*t talk the interior during their dinner and remain relatively well behaved. Once back on the boat, Joao announces that he “feels like death” and has a fever. In the middle of the night, Colin, Joao’s bunkmate and ever the great pal, gets Captain Sandy, and it’s a good thing, considering the guy has a 102-degree fever. See what happens when people live in close quarters for too long? Fevers and short fuses. A dangerous duo.