The Real Housewives of Dallas Recap: LeeAnne and Kary Bump Heads in Mexico 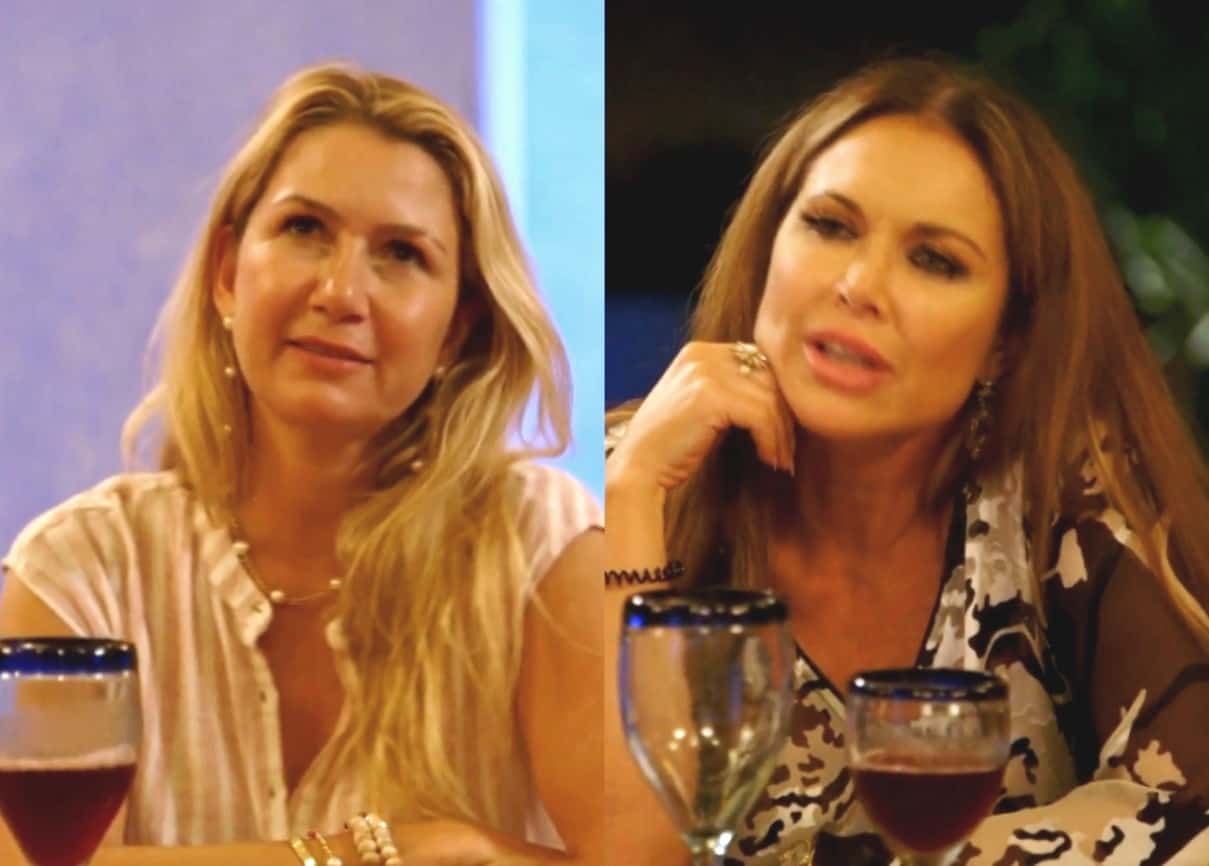 Every once in a while there’s a Housewives episode that doesn’t really bring a great deal of drama on its own, but you can tell it’s the precursor to some pretty heavy drama–especially when the ladies are on one of their infamous girls’ trips.  This was certainly the case with last night’s episode of The Real Housewives of Dallas.  There’s quite a bit to unpack, so let’s delve right on in.

The RHOD crew was headed to Mexico to continue celebrating D’Andra’s 50th birthday at newbie Kary’s palatial estate, but first they had some business to attend to at home-ish. You see, Stephanie had arranged for D’Andra to meet with her husband, Travis. She figured that the two had a lot in common.  Aside from the fact that they’re both celebrating the big 5-0 this year, they’re also both running their families’ businesses.  The difference is that Travis turned his family’s company into a rousing success, while D’Andra’s is a complete mess since she took the reigns from her mother, Dee.

Stephanie figured that Travis could give D’Andra some much-needed advice, and he gladly cleared his schedule to make time for their meeting. But there was one problem–D’Andra didn’t show up!  You see, D’Andra had an emergency–with her hair.  She’d gone to get it dyed, and when the color didn’t turn out just right, her stylist had to make several adjustments, leading to D’Andra spending hours in the salon.  After such a stressful ordeal, she just wanted to sleep, and so she called Stephanie (at 1:30 am!) and asked her to cancel the meeting.

Unfortunately, Stephanie didn’t relay the message to Travis until he called to ask where D’Andra was.  He was disappointed, to say the least, and he called D’Andra to let her know, but she didn’t even have the courtesy to answer his call.  She was too afraid of getting told off about wasting his time.  Her own husband, Jeremy, was also disappointed in her lack of responsibility, and he finally convinced her to call Travis and apologize.  Having been warned by his wife to ‘be nice’ to her friend, or else, Travis was gracious, and he told D’Andra they could reschedule.

As for Stephanie, she met with her life coach to discuss her recent feelings of anxiety and low self-esteem.  After sharing the story of her past suicide attempt last season, Stephanie, at first, felt that a weight had been lifted. But as her fans began reaching out to her, and even asking for advice on how to deal with their own feelings of depression, Stephanie began to feel more and more anxious, not to mention judged.  Her life coach advised her to give herself a break and be as good a friend to herself as she was to others.

Across town, LeeAnne met with her wedding gown designers in an effort to find the perfect dress for a bride of a certain age. Brandi once again dealt with her daughter Brooklyn’s snarky comments–this time about the clothes she was packing for her trip, which Brooklyn boldy let her know were less than fashionable.  As for Kary, she was busy making arrangements for her family in her absence and explaining to her young daughter that commoners take what’s known as a commercial flight when they travel.

Before long, it was time to go wheel’s up to Mexico, and as usual the journey was full of hiccups.  For starters, the ladies had to fly to Puerto Vallarta and take a two-hour shuttle ride to Kary’s estate.  After the long trip and early morning flight, no one was up for a bumpy road along the rough Mexican terrain, nor were they ready for the less than glamorous restroom they stopped to use along the way.  Well, “less than glamorous” is being more than generous–it was disgusting! The facilities were filthy and infested with flies, but after such a long trip, the ladies had no choice but to go for it.

After two long hours, the ladies finally arrived at Kary’s palace.  The accomodations were amazing, and were more like a high-end resort, complete with infinity pool and staff to greet them with much-needed margaritas, than a family vacation home.  The ladies were in awe as Kary gave them the grand tour, but whether out of jealous, or sheer exhaustion, LeeAnne just wasn’t feeling very festive.

LeeAnne was complaining about everything.  She wanted her own room, rather than sharing one with her hostess, as planned. She also complained about all of the stairs in the home. And finally, when she complained about taking the hike across a nearby bridge, saying there was nothing to see on the other side but ‘a shrub,’ Kary decided she’d had enough of her ungracious behavior.  She lashed out, asking if LeeAnne had to ‘be negative’ about everything.  It was a valid question.

LeeAnne, however, chose to pout, and she said that she didn’t appreciate being chastised.  Kameron, her ever faithful companion and chief apologist, agreed, and assured LeeAnne that she hadn’t been being negative.  D’Andra, on the other hand, wasn’t the least bit surprised by her behavior, as the LeeAnne she knows always ‘wants to be in control’ of everything.

A little later, the ladies sat down for a beautiful dinner, but LeeAnne was still feeling stung.  Kary tried to smooth things over and bring her into the conversation, but all she ended up doing was opening another can of worms.  She asked LeeAnne if she’d really never wanted children, and LeeAnne shut down the overture by explaining that after growing up being abused by her family, including eight years of sexual abuse at the hands of a relative, she’d felt too ‘damaged.’  She had been too fearful of continuing the cycle to start a family of her own.

Kary was shocked by this revelation and expressed her sympathy, but LeeAnne wasn’t finished.  She went on to tell Kary that she’d attempted suicide on three different occasions, and given the opportunity, might do it again–maybe even that night.  It was a cheap ploy, and Stephanie, especially, was disappointed that LeeAnne would stoop to that level.

With a dead dog like that lying on the table, dinner came to a close, and the show faded to black.  But there’s more to come as the Mexico trip continues and yet another dinner turns explosive. Stay tuned!