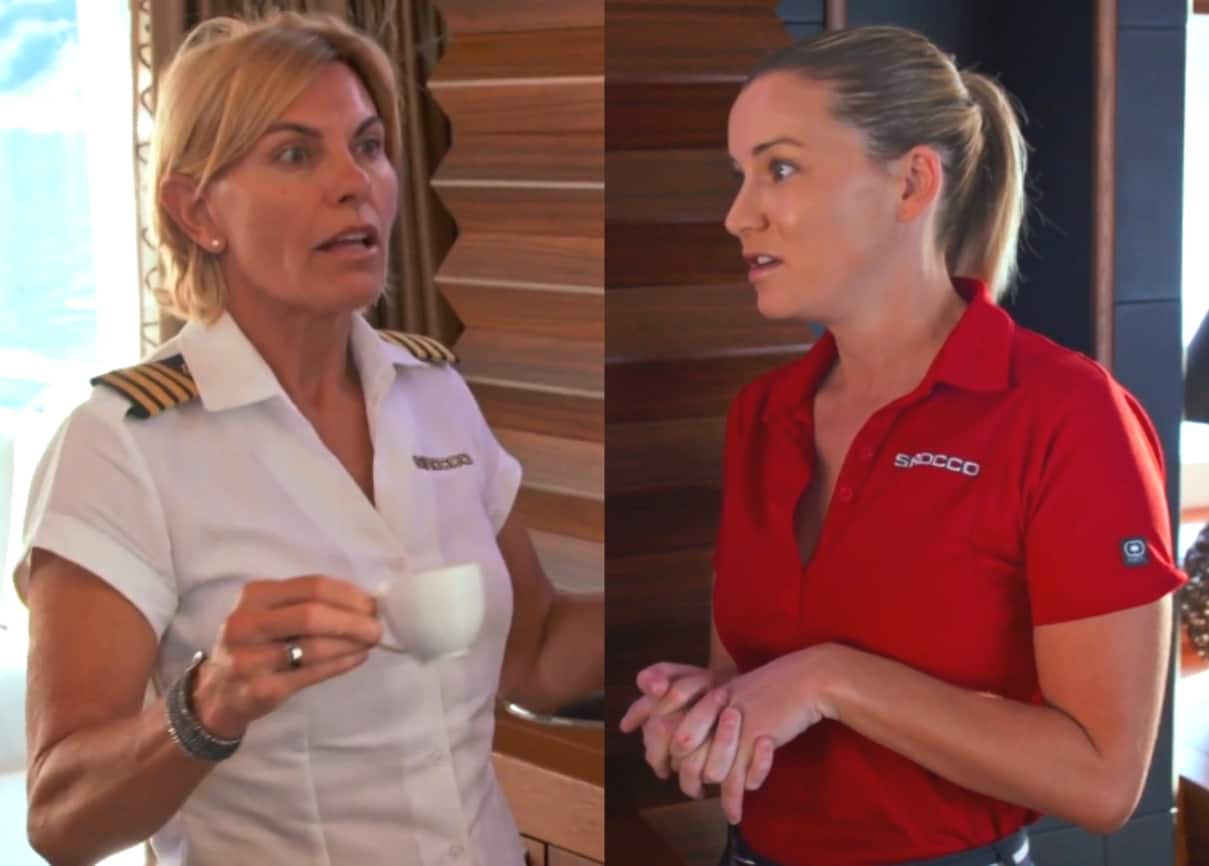 On this episode of  Below Deck Mediterranean, the rough weather seems fitting for the mood on board Sirocco.

“Jack and I finally had sex and I am very pleased with the merchandise.” Talk about TMI. Leave it to Aesha…. Joao has a virus and a fever…no specific illness was found when he went to the doctor. It seems a bit fishy to me (like perhaps he just wants an excuse to sleep), but at least Travis gets to be the boson now. On the boat, Travis knows his sh*t. It’s a good thing party Trav didn’t come to work, though, amiright? Although sick, Joao has a problem giving up his control to Travis, but he really has no choice in the matter.

With fresh provisions on deck, the pressure is on to make this final charter memorable. The boat gets secured in Monaco and Captain Sandy holds a meeting in the interior to give the crew a pep talk. The bad weather really puts a damper on all the outdoor fun…this just means that the inside of the boat better be rocking to make up for it.

The gang lines up (minus Joao) and welcomes the final charter guests of the season. The usual antics begin…Ben is busy in the galley, Hannah is busy falling in love…er, giving the guests a tour. Hannah basically has heart emoji eyes, but she’s trying to fight it. Good luck with that—the heart wants what the heart wants, girl. Captain Sandy looms in the shadows, listening as Ben schmoozes with the guests and tries to push them to try new things, like escargot. Man, he went from zero to sixty. He couldn’t start with something slightly risky, like okra? No, no. Ben had to jump right in with snails. That’s a way to introduce yourself to the guests, huh?

Hannah gets called out by Captain Sandy—she thinks the “two stews think they’re friends with Hannah and don’t really have to do their job.” Hannah hears the captain and realizes that the stakes are high. Her table better kick a*s. The stews pull together to attempt to “wow the pants off of Captain Sandy,” and alas, the lady cracks a smile upon seeing their creation.

It’s time for the Gatsby themed party. The guests have gone all out in their silly ensembles, and even the stews have on cheesy feather headbands. Get a load of the guest with the straw hat. How can he pretend to have a mature palate? To try and keep up with the theme, Ben cooks up the forced escargot, and the guests lie for the cameras and say they enjoy it. Eye roll.  Hannah tries to remain professional, but that charter guest is really making her blush. As Hannah puts it, “I can look but I can’t touch.”

The next morning, the crew is back at it for the last full day. The sun is shining and Joao has crawled out from his dark hole, ready and excited to work. Captain Sandy permits him to get back at it, but advises he keep his germy butt away from the guests.

There’s no holding back today with the guests. The toys are out and they are living their best lives. Meanwhile, the interior begins pulling out all of the stops for the Moulin Rouge theme—the last dinner, the last supper. Ben acts like he is sad to be wrapping up the charter, but all he does is b*tch. I can’t quite figure out how Ben truly feels about his job. Maybe he is just the type of guy who ALWAYS complains, whether he is happy or sad. Exhausting.

Captain Sandy is thrilled with Hannah and her minions, as they are stepping it up a notch for this finale dinner. They have a table scape to DIE FOR (in reality, it looks like a craft store just exploded…I am 100% questioning Captain Sandy’s taste level…) and some can-can dancers for entertainment. The guests, all in white, are in awe of the spectacle. It’s all so ridiculous.

Post dinner, Ben claims to be “delirious” because he cannot get through a meal without being extra AF. It’s a good thing the can-can dancers are there to lighten the mood and make Ben forget about his woes. The guests are impressed, but one guest in particular continues to take an extra liking to Hannah. “Hot guy’s coming up for a cheekie roadie.” Hannah believes that she deserves a flirt…and flirt she does. The guest invites her to California, but when Hannah finds out he is seeing someone, his allure dies big time. Although I am not entirely sure Hannah wouldn’t still hook up with him if Joao didn’t walk in and break up the mood. She’s the type.

OMG. Captain Sandy and her tables! What is her fixation with them? The next morning, she is livid that the table isn’t set yet and she is on a rampage. Captain Sandy is hollering and insists that Anastasia wake up the stews and kick it all up into high gear. The captain is particularly annoyed with Hannah (what else is new?) as she is supposed to be the leader of the bunch.

When Hannah reports to Captain Sandy, I have never seen her so deferential. She yeses the captain to death and bites her tongue, but Captain Sandy isn’t done. She wants what she wants and she wants it now. Let’s just hope everyone answers their radios in a timely fashion so that this charter season doesn’t wind up with someone thrown overboard.

(Side note: Where was Colin this episode? Besides a quick quip about taking a first date to McDonald’s, Colin was pretty much MIA. For all we know, he could’ve been back on Fire Island driving that ferry… poor guy.)