Home Real Housewives of Orange County News The RHOC Recap: Kelly Unravels During the Trip to Miraval as She Also Hits Gina on the Head

The RHOC Recap: Kelly Unravels During the Trip to Miraval as She Also Hits Gina on the Head 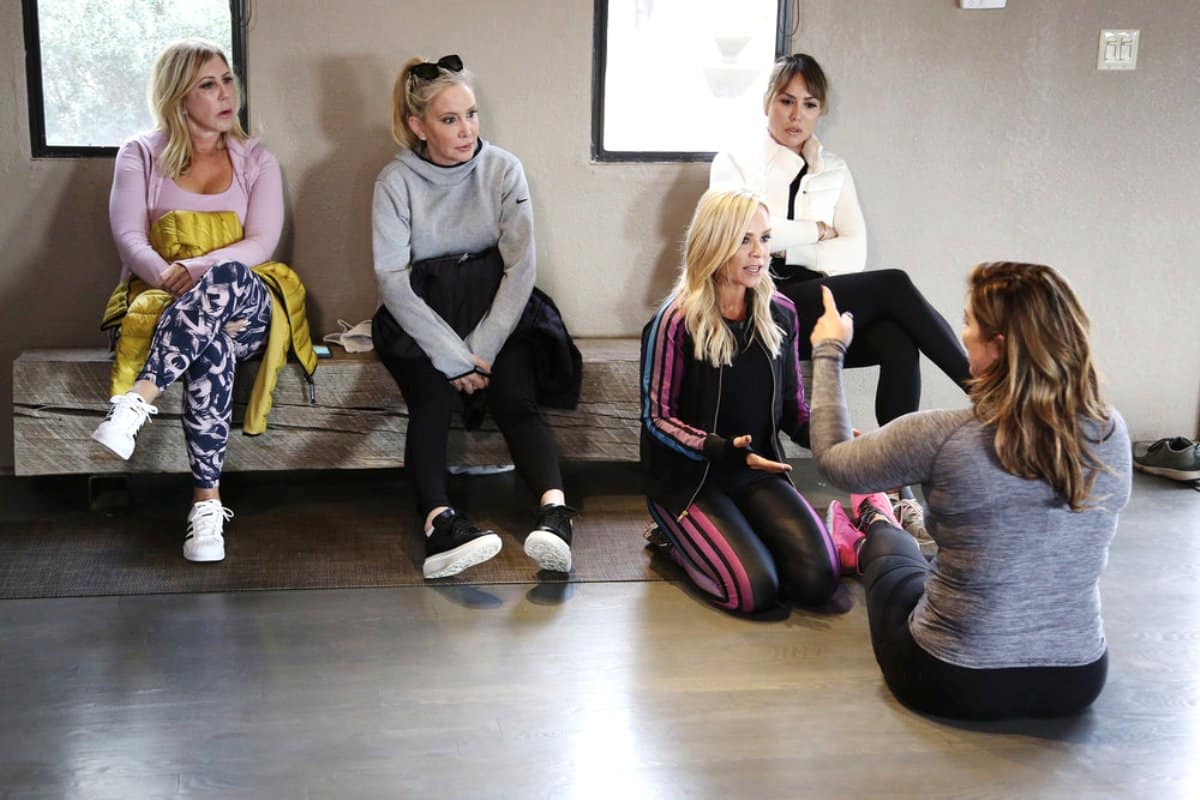 Only four hours into Miraval and any signs of relaxation and zen have already gone out the window on this episode of the Real Housewives of Orange County.

Over at the emergency medi-center, Shannon gets asked if she would like to press charges against Kelly for assaulting her (aka: hitting her on the head). Shannon declines getting the law involved, but she states, “I just hope she understands the severity of what she did.” I hardly think Kelly feels one iota of regret. In fact, back in the power-less villas, Emily, Gina, Braunwyn, and Kelly continue to enjoy all that Miraval has to offer. For starters, there’s a private chef AND a crystal healer. Yes, yes, that’s a thing.

How ’bout Gina and her eyelashes feeling “happy” holding the crystal? That happiness comes crashing down when Kelly enters. She yell-talks that she “knocked some sense into that b*tch” and that b*tch” she is referring to is Shannon. Why does Kelly have to turn everything up 14 notches and take it too far every single time?

The icing on the cake is when Kelly hits Gina on the head to demonstrate what a true hit on the head is. This leaves Gina speechless (a rarity in this episode…). Gina absolutely loses her mind, and the two women scream at each other while all of the workers in the villa stare open-mouthed at the madness developing. The ladies sling nasty jabs about each other at each other, and it gets ugly. Gina claims that she can’t take a joke right now, and when Kelly half-a*s apologizes, Gina suddenly stops her hollering.

Everything seems to be getting better once the cocktails start flowing and the power comes back on. Things start to look up, but then Kelly opens her mouth again and a new issue arises. Whilst talking to Gina, Kelly retorts, “If you were accomplished…” For the love, Kelly. YOU should not be doing this now. Kelly rambles on and on about how she has millions of dollars and has owned ten houses, whereas, Gina gets DUIs. This is outrageous. I don’t even know what’s going on! Gina is no “Skipper,” aka the little sister of the group, and she has had about enough of all of the low blows from Kelly. Gina keeps repeating that she’s going home, and for the amount of times she said it, she could be ON the plane home and unpacked already. Sheesh.

Now Emily and Gina are fighting?! I literally can’t keep up. I love Emily’s pantsuit. It really screams “girls’ trip,” doesn’t it? When Emily tries to stop Gina from “going home,” Gina lashes out at her, too. She explains how she felt pressure for not going to Vegas to see Em’s raunchy dance number, yet Emily doesn’t seem to understand what Gina is going through. I can hardly handle Braunwyn’s cackle through all of the fighting. From what I can figure out, it is clear that Gina is completely unraveling. and with that, she storms off to her “casita.”

The funny thing is, Tamra, Shannon, and her “splitting flipping headache” are all on their way back to WWIII and have no idea. While on the phone with Kelly, she yells to Tamra (who BTW is in the car WITH Shannon and the call is on speaker, duh) about how dumb Shannon is and how ridiculous she is being about this injury. What in the world is wrong with Kelly? Yes, Shannon is 1,000% over-reacting with her blurry vision, but let the lady get checked out and at least feign an apology her way. No, no. Instead, on the phone with Kelly, she states that the CAT scan finding must have found that “she had a loose screw inside her head.” Talk about insensitive.

Now Emily is crying, Gina is GOING HOME, and Braunwyn is picking through the pre-made food to make sure she doesn’t accidentally take any red meat. The NEW tres amigas grab the snazzy chef-made food and run back to their villa before Shannon and Tamra get back.

Meanwhile, Tamra storms back into the villa with Shannon in tow. She is a woman on a mission looking for Kelly. To do what, I am unclear, but at least it looked good. Instead, they find a shaken up Gina who fills them in on what went down while they were gone. Ever the pot-stirrer, Tamra just haaaad to ask Gina, “What was your good friend Emily doing?” while Kelly was attacking her. Gina explains that Em pulled the old “switcharoo” and attempted to make the fight about her. Man, these ladies do this so often that they have even coined phrases to explain the situation!

Almost on cue, the fun bus arrives with In and Out burgers. That fun bus is…Vicki. She comes bearing gifts, and you can instantly see Gina’s face drop cuz she knows that Vicki trumps her. Although, how come Gina didn’t get p*ssed when Shannon toasted (um, why is she drinking with that HEAD INJURY!) to the tres abuelas and the little bambino but got furious when the “others” referred to her as a baby?!

The next morning, the sun is shining and Kelly is planning to talk to Shannon in order to smooth things over. However, things get a little out of control over the phone, and so Shannon insists that Kelly come talk to her face-to-face. Gang one approaches gang two in the villa and Shannon lays into Kelly that she has been nothing but disrespectful since arriving in Miraval. Please note that Vicki is banished to the bedroom since Kelly doesn’t want to see her.

What is seriously up with Kelly and why is everyone adhering to her?! Kelly suggests that Shannon is a manipulative schemer, but she isn’t quite talking…she is legit shrieking to the point where I had to lower the volume on my TV. Somehow, Tamra is able to settle down the crazy, and Kelly and Shannon hug it out. After smoothing things over with those two, Emily and Gina attempt to get over this rough patch in their friendship. The two “best friends” don’t get very far and instead just call each other out for recent behavior.

For instance, Emily tells Gina, “If you’re worried about your image, why are you drinking a whole bottle of tequila with Shannon Beador?” (She has a point.) And Gina asks, “Why are you in Vegas dancing in front of your father-in-law?” (Valid question.) Well, at least they are both saying what we are all thinking…it certainly didn’t help heal their friendship, though.

The apology tour continues. Now it’s Kelly’s turn talking to Gina. Gina straight up tells Kelly she doesn’t need Kelly’s sh*t right now. She explains the life she is leading right now, and for some reason, Kelly feels sympathy toward the blubbering mess in her arms called Gina. But…OMG. ALL OF THE CRYING. It’s so dramatic! Emily is sobbing to Braunwyn. And yes, Emily. You did technically dance for your father-in-law, but that’s neither here nor there.

Somehow, through all of the fighting, Braunwyn and Gina find some solace during their nature walk. Braunwyn apologizes for calling Gina her little sister. Gina couldn’t care less about that–in fact, she is solely focusing on her fight with Emily.

Post aerial yoga (they have it all here), Vicki and Shannon join Kelly, Tamra, and Emily. I sort of feel like I’m watching two rival teams mingling. Kelly is shooting daggers at Vicki with her eyes and is afraid of Vicki “bullying her,” but according to my recollections, Kelly has been the bully throughout the entire trip thus far.

Gina finds some peace through writing words down at the end of the meditative walk, and who knew it would take a notebook and some rocks for Gina to get over her broken marriage with Matt? As Gina heals, more drama unfolds. Tamra straight up asks Emily why she (and others) were not invited to the infamous Vegas dance. Emily tries to defend herself by saying she only invited those who would “be supportive and kind to me.” Strike one Tamra. Evidently, Tamra refers to Emily as Shrek…like an ogre. Strike two Tamra. And for that comment, Emily did not extend the invite.

Kelly is #teamEmily and is her spokesperson, but it’s clear that Emily is terrified of Tamra and Shannon. She says, “I would like very much to be closer to both of you,” and the ladies all agree that they are all there to support one another. Vicki chimes in and states that all of the women have good intentions, and Kelly can hardly stand the words coming out of Vicki’s mouth. And therefore, she storms out. So much for healing on this trip, huh?