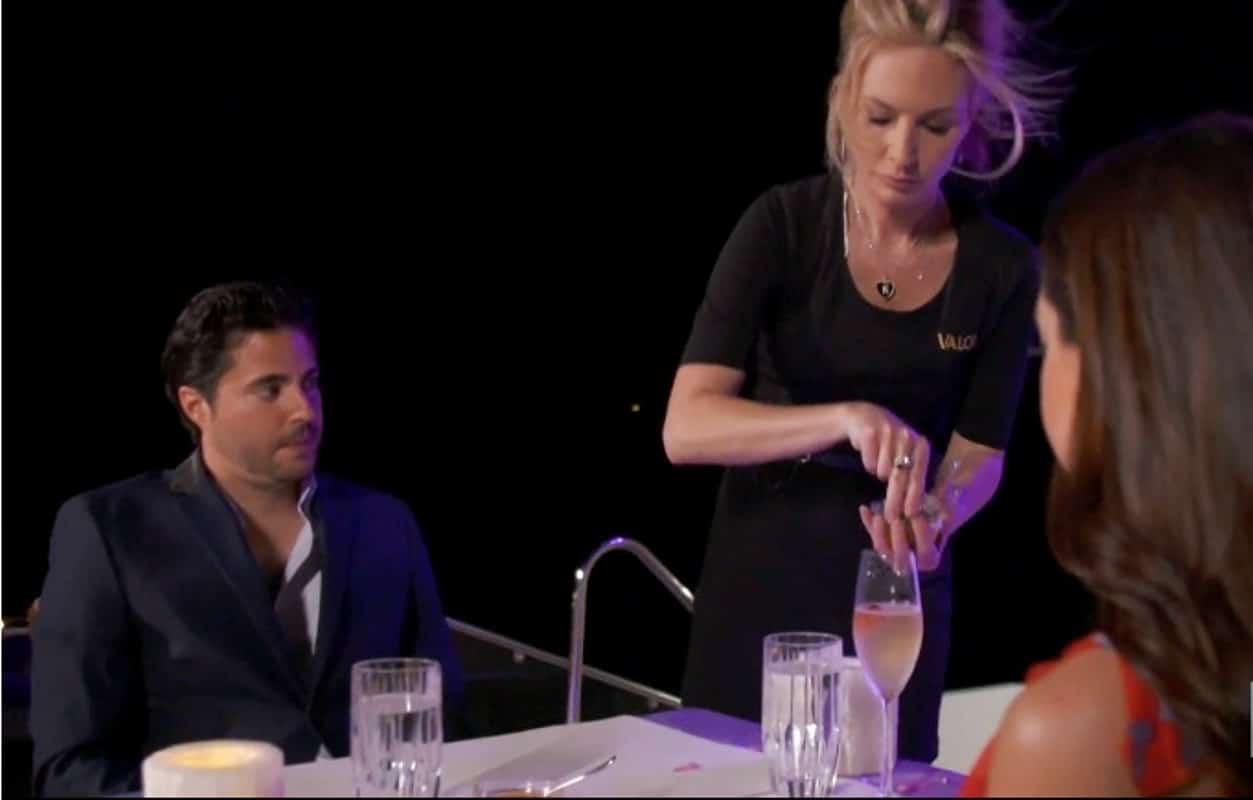 On this episode of Below Deck, we get a glimpse of what this crew is all about and how they handle the good, the bad, and the drunk.

Day two of the charter and we have a man down. Chef Kevin is spending quite some time locked away in the bathroom… I don’t know about you, but I would certainly not want that guy cooking my food. Kevin blames it on nerves, but I wouldn’t trust that… Shocking that a chef on Below Deck is dramatic. It is definitely a prerequisite that they be extra, amiright?

Michael, the head charter, is preparing to propose to his girlfriend over dinner later on. Kate breaks down the proposal craziness with Simone, and Kevin looks like he is about to lose his sh*t…literally. In the meantime, we get a glimpse of the “classic and expensive” dinner Chef Kevin is preparing now that he is feeling a bit more like himself.

After much ado, Kate gets the guests to sit down, and the crew gets a chance to learn some more about themselves. And by learning about themselves, I mean, they just talk about babes and c*ck blocking. Typical.

This proposal is 1,000% cringeworthy. Especially when Kate walks in right in the middle of Captain Smooth professing his love. He gets down on his knee and somehow she says yes, despite the fact that her-now fiancé is wearing shorts and a blazer.

As the night wears on, we learn that Abbi is in an open relationship with a guy and isn’t quite ready to settle down, and we learn that Captain Lee is still so lovable. He said the proposal made him feel “warm and fuzzy.” He’s the best. Can we discuss how the newly engaged couple FaceTimes their dog for the seal of approval? Hilarious and so, so basic.

The next morning, the crew preps to wrap up this charter. When Ashton greets the captain and asks how he is, Captain Lee replies, “I checked the obits and I wasn’t in there so it’s gonna be a good day.” Captain Lee with his one liners. Incredible. Off they go to ditch the guests, and Ashton gives Abbi a chance to dock the boat. Ashton is a bit nervous docking this sucker for the first time, but it ends well. As the crew says goodbye to the guests, they wait patiently for that thick envelope of tip money, as partying in Thailand doesn’t come cheap.

Brian, the lead deckhand, explains to Abbi that even though he seems pretty chill now, there was a time in his life when he was a bit more hot-headed. Abbi attempts to play “who had a rougher life” with Brian, and she tells him that she was once homeless but managed to graduate college as valedictorian? And got a scholarship for law school?! Impressive. Now if only she would run a comb through her hair…

At the tip meeting, it’s cute how everyone is still tip-toeing around each other, as they are still attempting to be nice, except for Kevin. Yes, that’s right, the chef is starting the drama and telling the captain that there are still some kinks to be worked out. Typical.

The $1,500 dollars per crew member is certainly going to help them have a fun night out. They are AMPED to party and get the drinks flowing ASAP. All of the dudes are trying way too hard to get Courtney’s attention, except for Tanner. He seems to be interested in the “older” woman there…the cougar…Kate. Interesting…

Post-dinner, everyone—minus Courtney—is having the time of their lives. I mean, I am pretty sure I just heard Abbi say, “Come to momma” to Ash. Oh man, it’s never a good idea for someone to sleep with their boss, but Abbi gives zero you-know-whats. The crew is smashed, but somehow Courtney is able to maintain her stoic face. She is captain no fun! Courtney gives RBF a new meaning and really doesn’t appreciate it when Brian tells her to smile more.

With only 28 hours before the next charter, Abbi confirms that she did not sleep with Ashton, despite sleeping next to him on the deck. Everyone is hungover AF and swearing that “the vodka in Thailand is different.” No, Kate. You were just wasted the night before, plain and simple.

I love the start of the season…when we are still learning about the new crew. For instance, Kevin has a six year old daughter?? You would think he would have more patience then! And then Simone! She can speak all of these languages and just essentially started yachting because she didn’t wanna work a 9-5. Who knew?

Captain Lee introduces the new charter guests, Helen and Richard, to Kevin, Kate, and Ashton. Luckily, Kate is familiar with the guests, as she has worked for them before, but naturally, Kevin is nervous about this charter.

Later, Tanner checks in with his parents and the convo goes a little something like this: “Were there any hookers there last night?” “Don’t get anybody pregnant!” OMG, Tanner’s mom. The woman has the sweetest voice, but boy, the things that come out of her mouth. LOL.

The preparations are underway for the new guests, and as provisions get brought on board, Abbi, the hot mess express, can’t find her walkie. As she searches, Kevin hosts a tutorial to Kate, Simone, and Courtney on what he wants for service. Woah. I thought that was Kate’s job? I smell some drama…

Captain Lee is P*SSED because HE found Abbi’s radio, and he’s about to “fall apart like a cheap suit” on her a*s. He makes it clear that radios should be attached to the deck crew every moment and Abbi realizes that he is not gonna go as easy on her next time.

Helen and her hubby, Richard, are back for another yacht trip, but this time they brought Helen’s “girl squad.” The problem is, one of the squad is SLOSHED. Homegirl can’t even stand up! What time is it and why is she SO drunk?! The bombed girl is a mess and she essentially passes out before even getting a full yacht tour. Like, get it together. You’re on a YACHT. And you’re getting FILMED. Amateur….!