Home Below Deck Below Deck Recap: A Drunken Guest Causes Concern for the Crew

Below Deck Recap: A Drunken Guest Causes Concern for the Crew 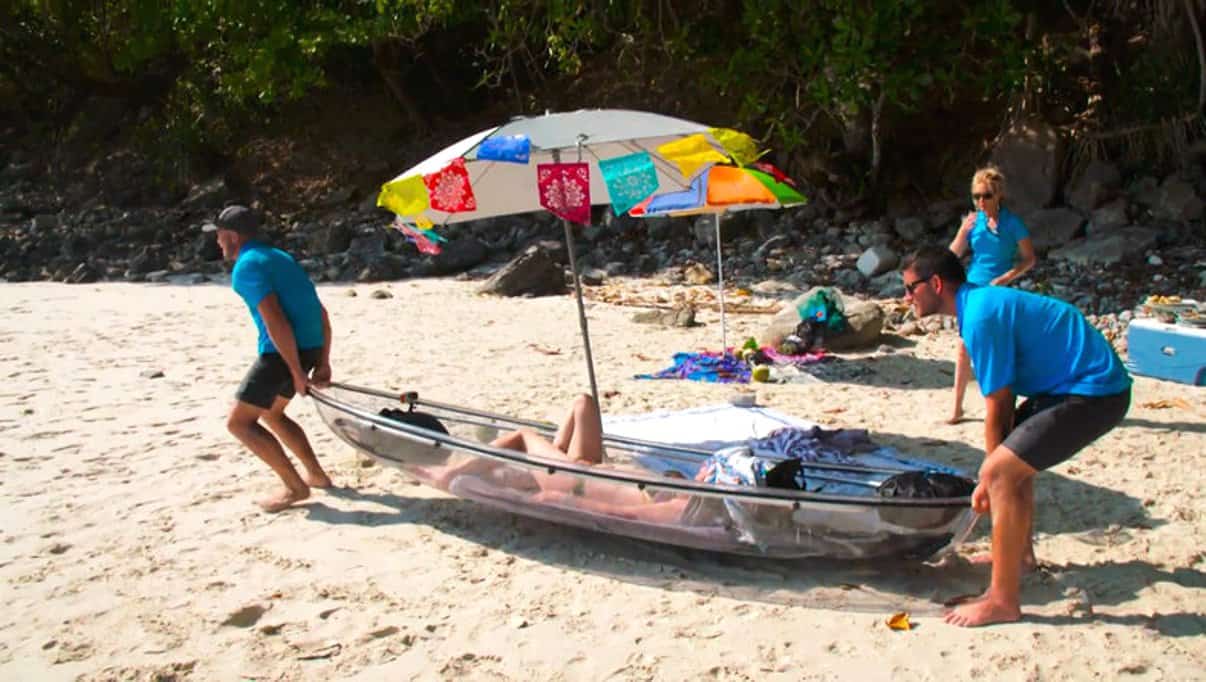 What were these guests drinking and where can we get some of that? Juust kidding. Brandy, in particular, looks like a GOOD time. Kate gives the guests the grand tour of the yacht, and off they go on charter number two. Kate is irked by Kevin because he is needy and TRIES to boss her around. He makes fun of Simone and acts as though he is the only one with “a lot going on upstairs.”

The guests, sans a passed out Brandy, are absolutely toasted, and we see that particularly when two of the ladies encroach on Captain Zeus, I mean Captain Lee. They are caressing him and rubbing him down, and in the words of Captain Lee, “I’ve got more fingertips on my a*ss than the FBI.” Zing. Screw all this snazzy food Kevin is trying to sell to these drunkards. They need McDonald’s and they need it asap.

Looks like Abbi needs a radio tutorial. You know, some kind of chart or PowerPoint. This girl keeps screwing around with her microphone and “keying her radio.” Captain Lee is beyond annoyed with her, much like Kate is annoyed with Kevin’s seafood extravaganza minus the seafood. WTF does he mean he didn’t order SEAFOOD?! He dropped the ball big time.

Brandy has risen. She is roaming all over the yacht, screaming obscenities, and is 100% STILL drunk. She is totally not gonna lay off the liquor because what’s the fun in that? Below deck (see what I did there?), Simone is busy ironing and explains how she equates that to math. That would explain why I hate ironing…

Kevin better PRAY that this bomb squad comes back with some seafood whilst they are out fishing. I don’t care that his great-great-great grandad was a chef on the Titanic. The guy is trying to create a seafood extravaganza WITHOUT seafood. He’s “gotta provide the ‘ganza.” I certainly wouldn’t count on this group reeling in a big catch. They are too busy hitting on the crew members AND Brandy is there for pure entertainment purposes. When Kevin finds out they’ve caught nothing, you can tell he’s starting to sweat.

Abbi confides in Tanner that she is feeling pretty uncomfortable, and he explains to her that things are gonna be FINE. I mean, he shared that he sometimes doesn’t even know how to tie a line. Well, I hope that tidbit of information makes the charter guests feel super comfortable.

I am unsure how any of these guests are still standing, based on the excessive amounts of alcohol they’ve consumed over the course of the day. I bet Kevin could serve them chicken nuggets and they would think it’s seafood. Captain Sandy would be impressed with Kate’s extravaganza table scene. Totally tacky and overdone. Beauteous. Kevin has managed to pump a few seafood-esque dishes out to these people, and they ooh and ah over his skill.  Thank goodness everyone was wasted.

In the meantime, Ashton and Abbi have a moment. Abbi makes it clear that she’s not “an idiot,” but she’s not accustomed to the vibe on the yacht. Ashton lets her know that she needs to be more confident and then everything else will fall into place.

Day one down. Courtney still hasn’t warmed up to anyone, not even when Ashton attempts to pry conversation out of her. It’s borderline painful. The next morning, the crew is up and at ’em early, and slowly but surely, the hungover guests emerge. Simone is not doing a great job as the sole stew, and naturally, Kevin is perturbed that she is more obsessed with making cocktails than setting tables and serving food #priorities. Simone tells him to be patient, which is like telling a pig not to oink.

It’s simply impossible to keep up with Brandy’s copious mimosa drinking, and Kevin just has to understand how to be a better team player! Kevin can’t seem to comprehend why Kate is “winging it” and Kate is furious that she’s been woken up to begin service. She wants to know where the fire and the bleeding people are because quite frankly, Kevin is behaving as though this is the end of the world and if these people don’t eat immediately, they will starve #soextra.

Kate looks like a hot mess express and we learn very quickly that she does not take orders from chefs very well. I wouldn’t mess with her if I were Kevin. Kevin decides that instead of making things painfully awkward the entire charter season, he is going to apologize to Simone. Things seemed to have been smoothed over between those two, but notice Kevin didn’t attempt to say he was sorry to Kate.

In fact, things seem to be going from bad to worse with them. Kevin throws Kate a half-a*s snarky apology and she is livid. Kate seeks out Captain Lee and lets him know that he needs to learn how to stay in his lane. Captain Lee agrees, but I think he just doesn’t want Kate getting too close to him since she still needs a shower and is stanking.

For lunch, they’re planning a picnic on a small, shady beach. How lovely. Somebody better tell Brandy to get her sh*t together and lay off the booze for a few so she can enjoy this experience. While some of the boys and Kate head off to the beach to set up, the tender gets beached. Whoopsie. So much for the picnic. They better work to fix this problem. I mean, we are talking about the future of their tip here!  Luckily, Ashton and Brian save the day and off they go in the tender to pick up the supplies and the food.

The guests all head over to the picnic and they are next-level drunk.  I don’t understand why they continue to overserve Helen and the gang.  Brandy can’t even hold her head up!  She’s like the drunk friend at the club who everyone has to take care of.  Kate’s concerned that Brandy isn’t going to enjoy her lunch, but hot damn, it seems like Brandy has bigger problems at the moment.  She is going to need some serious medical attention and fast!  I don’t think putting this girl in a kayak is the best way to transport her, but honestly, Brandy doesn’t have a clue what planet she is even on!  All I know is that a hefty tip better be in this crew’s future after putting up with all of their shenanigans.