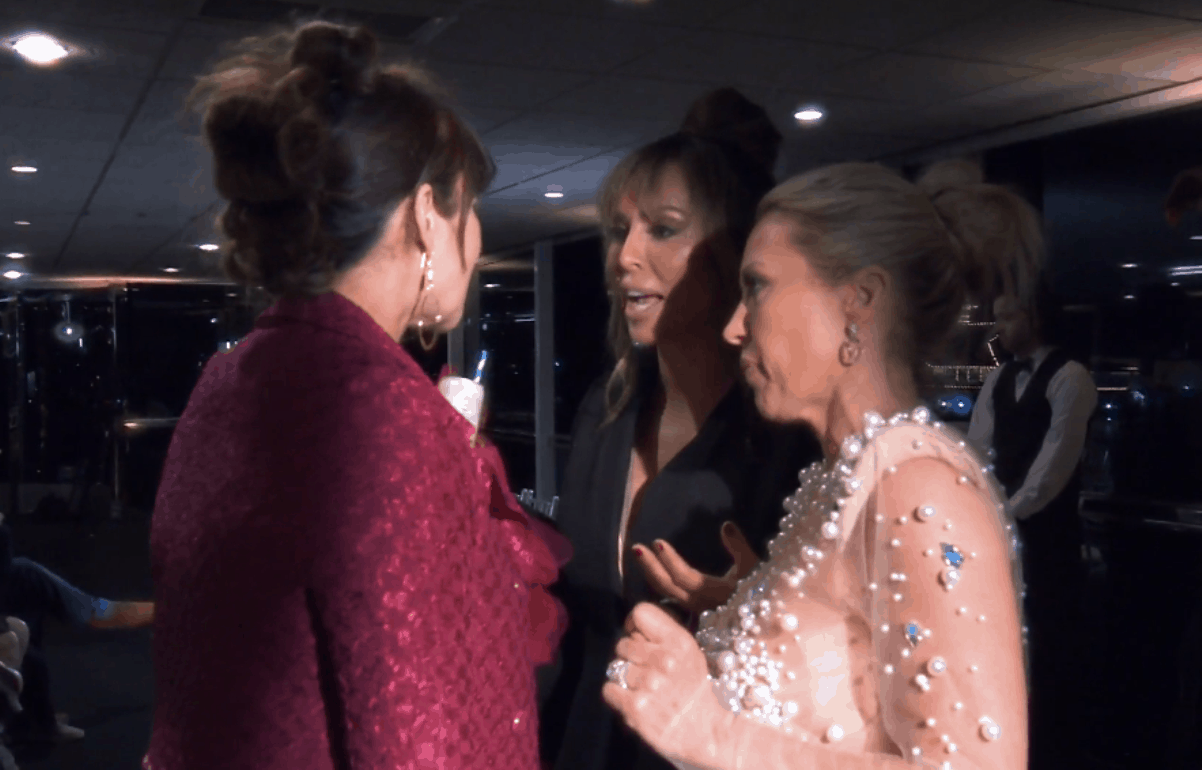 On this episode of the Real Housewives of Orange County, OC Fashion Week is underway and the ladies try to work through personal issues in their lives.

Braunwyn and Kelly are riding a tandem bike. The fun just doesn’t stop with these women, huh? They are like two bumbling idiots on their “electric” bike, and if you thought Braunwyn’s laugh was bad, her scream is even worse! The girls pedal to a bike shop in the hopes of finding Kelly’s boyfriend, Dr. Brian, a birthday gift. Braunwyn uses this time alone with Kelly to pressure her to attend the infamous, world-famous, Orange County fashion week cuz her daughter, Rowan, is launching her dancewear line there. Riveting.

In the meantime, Tamra and her America lovin’ son, Ryan, head to a dermatologist to talk tattoo removal. Tamra is baffled by her son’s excessive support of the current president and tells him, “You’re like in a Trump cult.” He blames the lack of building blocks in life on his decisionmaking, and if that doesn’t make Tamra feel guilty, I don’t know what will.

New hair, who dis? “Dr. Hottie slid into my DMs” and so, my friends, that’s how Gina landed her newest date. She claims she is horrified she responded to a DM, but Dr. Hottie is a brain surgeon, so there’s that. Hopefully, Dr. Hottie likes white-haired ladies cuz Gina went a little light with the blonde.

If you thought Braunwyn’s family couldn’t get any bigger, surprise! Step-siblings, Dr. Deb. They’re all there to celebrate Rowan’s upcoming fashion show. Speaking of the fashion show, Shannon’s daughter, Adeline, is prepping for her big modeling debut. Shannon is micromanaging her kid and demanding she brush her teeth “good,” before practicing her high-heeled walk. Shannon’s gonna turn into the next Kris Jenner if she keeps it up.

Braunwyn is clearly channeling “Big Bird, but like, high-end Big Bird” in her lewk for the fashion show. She chats with her hubby about how proud she is of Rowan, considering she suffers from severe OCD. When Rowan jumps on her parents’ bed to talk before the show, we can see that, based on Braunwyn’s ensemble, Braunwyn thinks the fashion show is about her. Way to try and steal the spotlight with that ridic ensemble, Braunwyn.

Is Shannon trying to live vicariously through Adeline? Even her other daughter wants Shan, the “momager,” to zip her lips. Adeline is wise for ignoring her mother’s advice. I mean, did you get a load of her peace sign poses?!

More and more people begin to arrive at the show. When Braunwyn greets Tamra, Eddie wants to know if the next time the ladies decide to make out, he can watch. I bet he wouldn’t be so cool with the whole thing if he knew that Tamra fantasizes about Braunwyn when they have sex #realtalk. When Gina arrives, no one has anything nice to say about her new “really ugly hair.” You know it’s bad when no one comments on it…like, at all. The only person who has something to say is Emily. I see she is trying to butter her old pal up. Gina fills Emily in on the news that Matt is still trying to get back with her. But I’m not sure he will be interested after seeing that new ‘do.

The OC fashion week show has begun, and it is pretty anticlimactic and wack. I mean, it’s on a boat for crying out loud. In between shows, Dr. Deb, Braunwyn’s mom, heads off to use the bathroom, but not before she gets stopped and questioned by a security guard. Naturally, Dr. Deb freaks out and claims the guy grabbed her. She tells him, “You need to respect your elders. Oh, my goddess. I went to go to the bathroom and he grabbed me.” Well, I see Braunwyn gets her dramatic side from her mother.

Once Braunwyn hears about this debacle, she loses it. She storms off to Kathy, one of the co-hosts of OC Fashion Week, and demands to know what just happened with her mother. Kathy doesn’t take this lightly. She, too, spirals out of control and tells Braunwyn, “I think you’re making a false accusation.” Kelly runs to Braunwyn’s rescue, but the woman in charge gets heated, explains that she didn’t know who Dr. Deb was, and proceeds to bop Kelly right on the chin with her mic. LOL. Wait, why is this lady talking into her microphone while bickering with these women?

In the words of Kelly Dodd, “what a wacko jacko.” Braunwyn has completely gone off the rails. She is fuming and it is hilarious that Kathy is talking about anti-bullying into the microphone prior to introducing the “little girl who did it.” Not gonna lie, Rowan’s collection looks a bit like a home-ec project. But nonetheless, I’m proud of the girl for giving it a go. Adeline crushes it on the runway and momager Shan feels incredibly proud of her Gigi Hadid wannabe daughter.

Once the boat docks, everyone congratulates Rowan and Adeline, and they all exit. In Braunwyn’s van full of family, she is still fired up about the co-host, Kathy, and she begins shrieking “don’t f*ck with my family.” We hear ya, Braunwyn. Loud and clear.

The next day at the equestrian center, Emily and Braunwyn meet up for a nice hang. Emily explains she wants to get back into riding cuz it calms her, and you better believe Emily uses that arthritis excuse as she mounts the horse. The ladies bond over parenting and Emily makes it clear that she appreciates having Shane in her children’s lives because she didn’t have a father figure. Nor did Braunwyn, as she had a dad who was a functioning alcoholic. Emily admits that her anger issues probably stem from her childhood and Braunwyn confides in Emily that her issue has to do with abandonment. Yawn.

“What do you wear to therapy with your ex?” I love how Gina is styling her hair and worrying about what to wear even though she is claiming left and right that she’s over him. While FaceTiming Tamra, Gina tells her that Matt, her ex, showed up unannounced and he wound up in her bedroom. The guy let himself into her house at 1:00 in the morning! How is this ok? I’m also concerned that Gina didn’t lock up her home at 1:00 in the morning! I don’t care HOW interesting her convo with Dr. Hottie was…ya gotta lock the door, girl. Tamra warns Gina that this is gonna “really screw with” her head, but Gina can’t quite wrap her mind around that.

Later, Tamra explains that she’s been “a little bit worried” about her son. I mean, I would be concerned, too, as this guy is living that hermit life. Ryan tries to make Tamra feel bad about his upbringing and explains that he felt as though he was “the trial son.” He further states that all the mistakes were made on him and everyone else got “the good stuff.” Tamra talks to Ryan about the prospect of a life coach, but he doesn’t seem to be interested. Tamra must be feeling bad about the way she raised the guy cuz now she is bending over backwards to make things right for her son.