Home Below Deck Below Deck Recap: Chef Kevin Finds Himself in the Hot Seat with Captain Lee

Below Deck Recap: Chef Kevin Finds Himself in the Hot Seat with Captain Lee 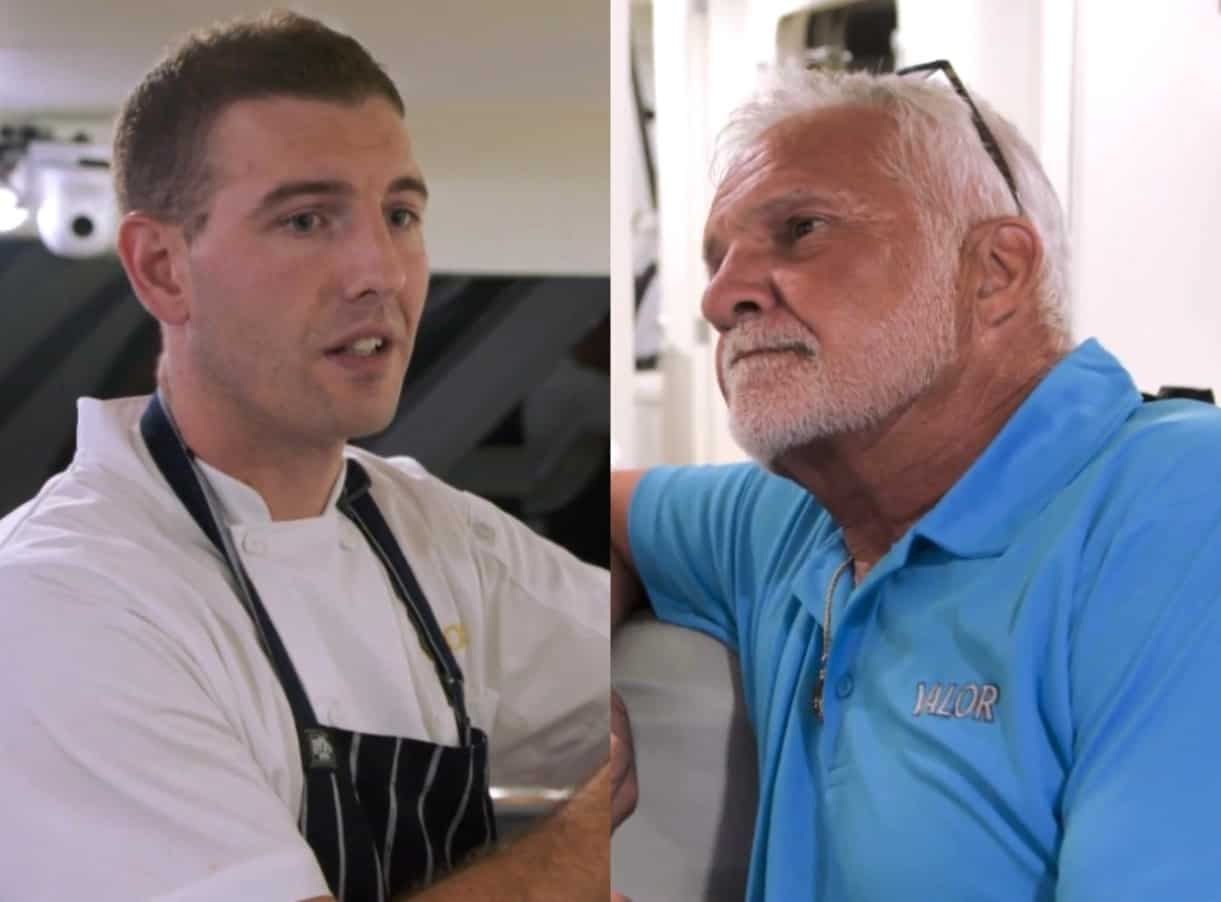 We get to see just how short Captain Lee‘s fuse has become on this episode of Below Deck.

Don’t you just love how unconcerned the charter guests are about their good old pal, Brandy? As she gets brought back to the boat, the rest of the guests request ice and snap photos cuz that b*tch ain’t gonna kill their vibe.

In the meantime, Captain Lee has called in the medics because Brandy is a hot mess. As the rest of the guests make their way back on board, Captain Lee informs them that he is “responsible for every swinging d*ck on this boat” and that it’s his job to be sure everyone remains safe, including Brandy in her drunken stupor.

Tanner is trying to mac it so hard to Kate and is attempting to lay the groundwork for a date with her. I can’t quite tell if Kate is actually interested in him, but she does *slightly* entertain him. Speaking of entertaining, watching Abbi get scolded about her hair is hilarious. Homegirl has a mane and Captain Lee has about had it with reminding her to tie it back.

Brandy is alive, ya’ll, and the medic cannot seem to put his finger on her prognosis, but he informs her pals, “She’s drinking too much alcohol.” I mean, I could have told ya that! Oh sh*t…Brian f*cked up the davit. Not even sure what a davit is, but Captain Lee is p*ssed. Apparently, it’s a $60,000 piece of equipment and now everything must be brought on board by hand. WTG, Brian.

In the meantime, Chef Kevin is claiming that the meal he is cooking for the guests this evening has “taken off the pants of many women before,” so I am looking to be impressed. As all seven guests begin to make their way to the table (obvi Brandy is too inebriated to join in on the dining experience), Kevin gets called to the deck by Captain Lee.

Don’t you just love how gangster the captain is? He just sits there, cross legged, and demands to know what Kevin’s deal is. Captain Lee found out about Kevin’s ‘tude via Kate and he gets straight-up disrespected by Kevin when he turns his back on him and leaves. It’s never a good thing when you tick off the captain. Kevin better pray that his meal “takes the pants” off of Captain Lee since he is joining the guests for this dinner. Buuut, Kevin f*cked up. He forgot an entire dish, and in the words of Kate, “He served his mistake to his boss on a silver platter.”

Captain Lee is furious, and this certainly isn’t helping his cause AT ALL. As the guests ooh and ah over the dish, Captain Lee promises, he “will have Kevin’s a*s for this” since he is forced to sit at the head of the table eating garbage. None of the stews can comprehend that Kevin actually thought this would be somewhat ok. And when Kate checks in with the captain post-dinner, he calls Kevin an “arrogant little pr*ck.” Have I ever mentioned before just how much I love Captain Lee?

As the night ends and the guests head to bed, the crew knocks off as well. Courtney, the sole stew awake, is minding her own business and cleaning up from the evening. However, she is about to get a terrifying surprise. At 12:20 am, Brandy emerges from the dead. She makes her way around the boat, finds Courtney, and asks for some champagne. Being cautious, Courtney wakes Kate because she certainly doesn’t wanna overserve the previously (and probably still) very wasted guest. Luckily, after scream-talking on the phone, Brandy passes out again and the girls can breathe a sigh of relief.

The next morning, the crew preps to wrap up the charter and Brandy is still drinking champagne. Kevin finds Captain Lee and apologizes for not feeding him the night before. Captain Lee doesn’t let it go and Kevin just stares open-mouthed with a dumb look on his face. Kevin leaves the area after being scolded and “doesn’t think it’s fair.” Earth to Kevin. You didn’t FEED YOUR CAPTAIN. You wanna talk about what’s not fair?!

Kate was unsure if Tanner thought sharing wine with her was considered a date. Poor guy was amped to spend some quality time with Kate, but she had no idea it was supposed to be a one-on-one thing. Kate also thinks it’s hilarious that he doesn’t have “the balls” to call it a date, soooo this should be super awkward. Poor Tanner. It turns out that Kate would rather wash her hair than have some wine with him. Ooph. That’s a terrible excuse!

As the night wears on, everyone is getting crunked. But no one is more bombed than Abbi. Kevin is drinking away his sorrows about the captain and Tanner’s just like every other drunken deckhand on this show. Cute when sober, but rarely ever sober. Kate claims that she will “bang him drunk maybe, possibly on accident,” but the timing has to be just right for their paths to line up.

Suddenly, after a couple thousand drinks, Ashton is interested in Courtney. Courtney finds his flirting more annoying than anything and is less than charmed by him. She states, “Clearly I’m sort of half in on this conversation.” After going through Ashton’s bizarre job interview/hit on session, Courtney makes her way over to Brian. Lo and behold, she actually smiles while talking to him. It seems like everyone is into this duo of Courtney and Brian. The one exception is Ashton, who is just straight salty about not winning Courtney over first.

At the end of the night, everyone is tanked. Some of the crew are passed out, some are shirtless, and some are just walking around–scratch that, falling over–with bottles in their hands. Abbi is the biggest disaster of them all as she drunk eats, and her hangover is next-level in the morning. I am sure Captain Lee is gonna love that.

Although it’s a new day, Kevin still hasn’t gotten over his tiff with Captain Lee. He heads out for a run to clear his mind and it’s a damn shame that Abbi can’t join him. No, no. Instead, she is sending Ashton and the deckhands text messages TELLING them when she may be able to wake up. Ashton is less than pleased with Abbi’s audacity. It seems like the wheels are falling off with this crew, and it’s going to take just a few more things to make this seemingly smooth running crew fall apart.