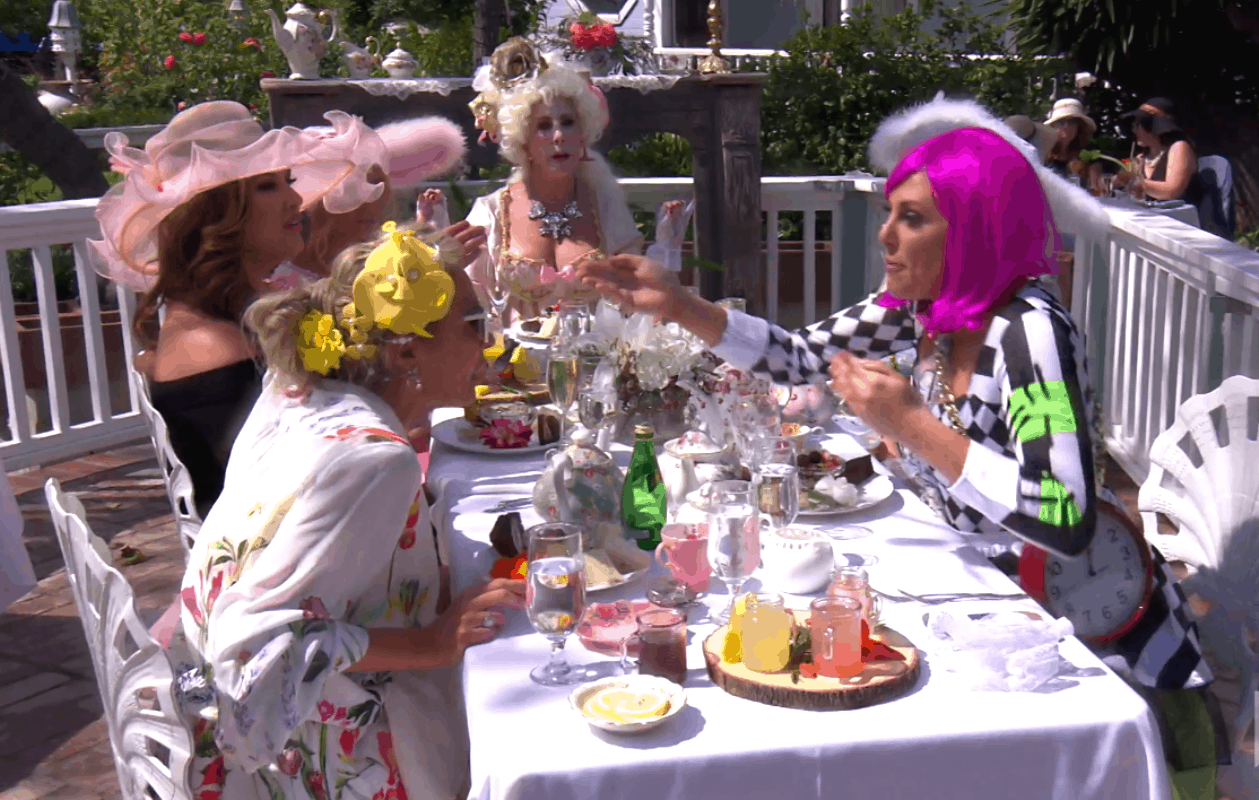 They may be in costume and they may be trying to act lady-like, but on this episode of the Real Housewives of Orange County, the claws come out.

Tamra and Vicki are on their way to a costume store. I am unclear why Vicki is going, as she is wearing a mask at all times. Bad joke… They are meeting Shannon and Gina there because they need outfits for Vicki’s upcoming birthday tea party. Eye roll. While in the car, Tamra gossips to Vicki that she got a photo of Gina and Matt snuggled up together at a bar. Tamra is p*ssed because Gina doesn’t listen to any of the advice Tamra gives her. I mean, would you? Evidently, Gina was telling everyone at the bar that Matt is (present tense) her husband. Maybe that would explain why he let himself into her house the other night…

So, Braunwyn’s dinner-making prep sounds pretty terrible, huh? All of those food preferences and allergies. Exhausting. Braunwyn talks to a few of her kids about college and worries about having pieces of her heart leave. I mean, she will still have like 34 other kids to worry about. No big deal.

“I get to be queen for the day and my girlfriends get to bow down to me.” – Vicki. That sounds like a party I would definitely RSVP no to. Shannon arrives at the costume store, rounding out the tres amigas, and Tamra can hardly wait to spill the tea about Gina and her ex. As soon as Gina enters (late, of course), Tamra confronts her. Tamra yell-talks at Gina and Gina admits that she “touched his wiener maybe a little.” Ooph. Obviously, Shannon jumps in and gives her two cents cuz she likes to be the center of attention, duh.

Gina takes her daughter, Sienna, to an OT because she is concerned about her sensory processing. It’s a pretty heavy topic and I am pretty sure Gina has no idea what the therapist is telling her. Gina gets told her daughter should receive some therapy and she begins to blame herself for her daughter’s issues. Not to change the subject, but did anyone notice all the bruises on Gina’s legs? What’s up with that?

Tamra is busy getting ready for Vicki’s tea party and she FaceTimes Kelly. Kelly was invited to the party by Vicki, but she declines because, as she says, “The only celebration I’m doing for her is going to her funeral.” Ouch. Vicki and Shan go over to Tamra’s house for the hair and makeup pre-party. So far, Vicki looks the most ridiculous of the bunch, which is pretty easy for her to do.

Gina is the first to arrive at the tea party and she looks like a cracked out Mad Hatter. Not sure why she thinks a stripper costume fits the bill for a tea party, but alas, there Gina is. Emily and Braunwyn claim they didn’t get the costume memo, but I just think they are zero fun and would much rather look slightly civilized. Braunwyn truly gets under my skin when she claims to be allergic to wine. “I wish I wasn’t allergic to it. It just makes me so puffy!” No, Braunwyn. That’s not allergic…that’s what happens when you are HUNGOVER. While waiting for the other women to arrive, Gina shares that she slept with Matt. Emily is dumbfounded and does her best to hide her opinion. Braunwyn states, “Good for you for making bad choices.” Touche.

OMG. The entrance to this tea party is next level extra. Tamra and Shannon are like the wicked stepsisters. And Vicki. Well, I don’t even have words for this birthday “queen.” Can we all agree that these accents need to stop like now? Once everyone gets settled in, Braunwyn tells all of the women about the fashion show saga. You know, the one where Dr. Deb got “attacked” by the fashion show organizer? Braunwyn even shares how much she loves Kelly because she protected her mom. Ah, Kelly. Because the girl’s not in attendance, it’s free reign for everyone to talk sh*t about her. Evidently, Kelly got in a bar fight cuz some girl was all over her boyfriend?!

Braunwyn tries to clarify what actually happened. She attempts to explain that Kelly and Dr. Brian fought and had an Instagram breakup, but alas, Tamra and Shannon excuse themselves. They claim to not like all of the talking about Kelly. Tamra explains that she is sad Kelly didn’t come to the tea party, but she lets Shannon know what Kelly had to say about going to any event to celebrate Vicki…cough, cough…funeral. Shannon is repulsed by Kelly’s insensitive comment and asks Tamra, “You wanna FaceTime her? I’m not happy with her right now.” When the two bullies give her a ring, they let her know that there’s “a lot of talk about her at the table,” but choose to leave out that they are less than thrilled with her Vicki funeral talk.

As the food gets served, Gina receives a phone call from the OT. When she gets back to the table, she shares with the girls about her daughter’s prognosis. Braunwyn, upon hearing this news, asks Gina, “And you do public school, right?” You can tell that Gina recoils at this question. She feels attacked and states, “You’re kind of a snob in, like, not the funniest way to me.” Braunwyn begins to get defensive and teary as the ladies tear her apart. Braunwyn claims that her kids go to public school, but the reality is, they go to a charter school. Gina lashes out and shrieks at Braunwyn because she can no longer stand her snotty commentary. The other ladies look on and Braunwyn runs off to the bathroom. What is with these ladies and the bathroom this season?!

Gina apologizes to the table, with a mouth full of food, of course. Vicki can’t understand why everyone just can’t get along for her birthday and I wanna tell her that she’s getting a taste of her own medicine. In the meantime, Shannon runs to find Braunwyn and advises her to head back to the table and apologize for talking about herself too much. The problem is, Braunwyn can’t stop using the pronoun “I.” Gina accepts the apology, but she attempts to explain that she is not very forthcoming about her private life, which is why she only goes out and touches her kinda-sorta-ex-husband’s wiener in public places. LOL. “Happy flipping birthday” to Vicki. Of course, the day has to end with Tamra acting obnoxious and shoving cake into Vicki’s face. I’m just happy there was no Braunwyn/Tamra makeout session at this party.

Is it weird that I kind of missed Kelly this episode? It was like a breath of fresh air to see her oversharing to her daughter. She tells Jolie that the ladies were talking sh*t about her at the luncheon. To find out more of the details, Kelly phones Braunwyn. Braunwyn sings like a canary and tells Kelly that the women wanted to know the details of her fight with Dr. Brian. Braunwyn lets Kelly know that she tried to clarify the situation.

Post tea party, the tres amigas pile into their ride and Tamra “accidentally” spills the whole “I’m not celebrating anything for Vicki except for her funeral” comment to Vicki. OF COURSE SHE DID. I love how she acts like she didn’t really mean for that to come out. Tamra just looooves to stir sh*t up and she did a great job of it. Vicki immediately becomes tearful. Her amigas jump to Vicki’s defense, but they remind Vicki that she, too, has been mean to Kelly in the past. Tamra, obvi siding with Vicki (because she is in front of her face), sighs and says about Kelly, “You can take the girl out of the hood, but you can’t take the hood out of the girl.” Funny that Tamra can judge someone’s background like that, considering she is from a trailer park…hmmm…