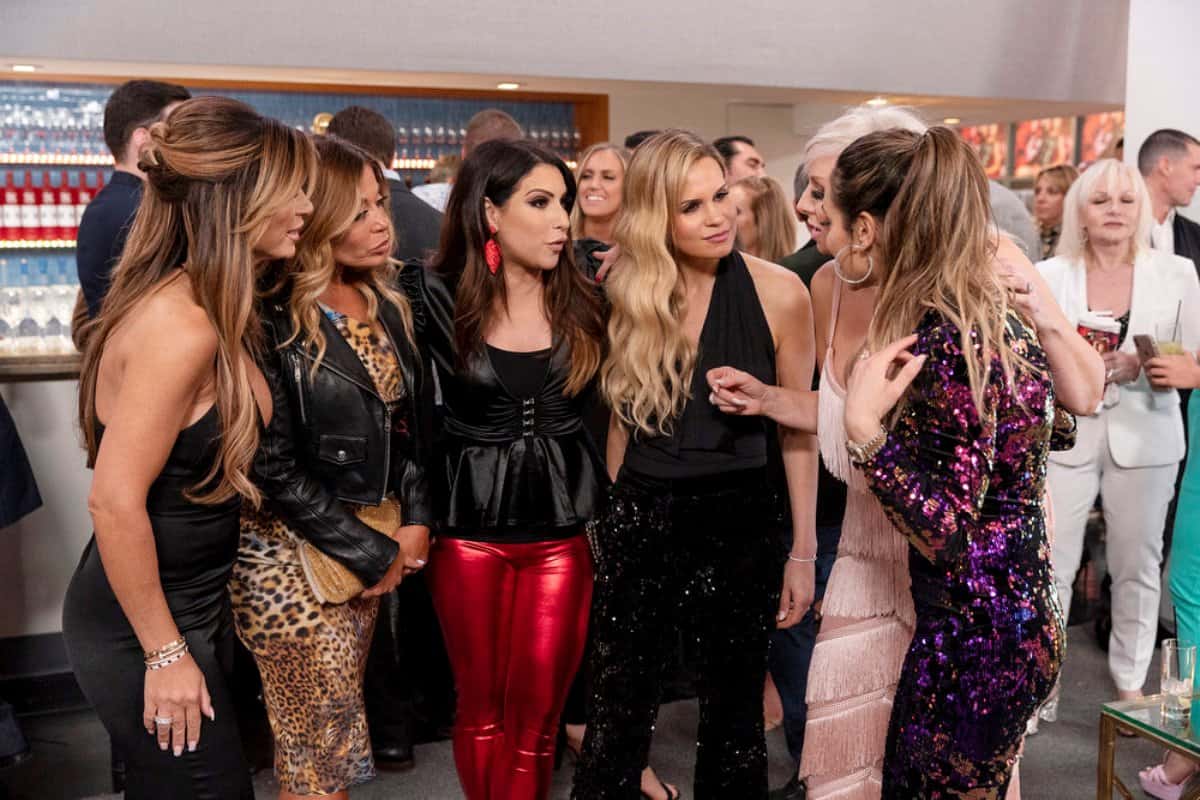 We start out with the kids of NJ with Jennifer calling her kids savages and Jackie driving her kids in the car, asking them to tell her a joke. Then, she says she doesn’t like the direction where the (bull Shih Tzu) joke is going!

Joe brings Melissa breakfast in bed for her 40th birthday! Melissa reflects on her successes and they chat about the party. Melissa is afraid it is going to be a big hot mess with all of her friends fighting.

Marge and Joe are also in bed and she shows him an awful bruise that she thinks is a blood clot. They talk about Marge Sr. not working for them anymore and now needing a new place.

Throughout the episode, all the couples are shown rehashing the discord among the ladies. Melissa is in the middle (as always) due to Teresa not liking Jackie. Danielle and Marge are still fighting. Joe Gorga says Teresa is a ticking time bomb…

Joe Guidice calls from ICE and he is ranting about being deported and being separated from his kids and family. He says it’s a “junk hole” there and he wants out. For the first time, Papa Giacinto expresses his disappointment in Joe. He says he told him six times to become a citizen and he didn’t listen. It is good to hear that this had been a conversation in the past. Unfortunately, it isn’t a conversation that was ever aired on the show.

Marge Sr. and Marge go apartment hunting with Joe. They look at a one-bedroom apartment that Marge Sr. thinks is too small, which then prompts the realtor to show them a three-bedroom apartment for $5,000 per month. Marge took the day off to help her mom, however, the seemingly unappreciative Marge Sr. has to go back to the city to get ready for a party that night. This senior citizen has more of a social life than I ever did in my twenties. Marge Sr. tells her if she doesn’t find a place she will have to move in with her daughter! Joe looks frightened over that possibility. Oh boy, would that be interesting!

We get to see Dolores having a meal with her dad, Larry, who is a former cop.  She is concerned about his health, and he says, “Glad you found the time to see me.” He has three clogged arteries and she is worried about his diet. He doesn’t eat vegetables and doesn’t exercise. He was told he has what the doctor said is a “widowmaker” — not good! No pasta! He is old-school and is indestructible! He is concerned about Dolores’ relationship with David and thinks he may not be right for her. Larry also says she is too old to “coast” and time is the most important thing you have, which is really good advice. She says David is good for her and her dad wasn’t always around either in her youth due to his career. She sees her dad in David.

Jennifer is in the kitchen with her family cooking. I find Bill’s interest in her drama a little creepy. He says he has a hospital emergency, but he takes the time to hear about the drama, which I find a little odd. She mentions showing the video to her daughter Gabby that she made of Jackie to see if what she did was wrong. Jackie and Marge are shopping for Melissa’s birthday gift and also talking about that stupid video! I am so tired of seeing that replayed — it wasn’t funny the first time. Jennifer’s daughter said after seeing it that it would have hurt her feelings as well. Gabby thinks she should apologize for hurting Jackie’s feelings.

Teresa is flirting with Tony the pool installer. Joe Gorga shows up to see what’s going on. Teresa is putting marble around the pool??? I can understand how she got into her financial predicament! I agree with Joe on this one. Giacinto is in the kitchen again making something to eat and I would love to have him live with me and cook for me! Joe Gorga tries to give Teresa advice to “watch your back.” Teresa says Margaret rags on Danielle a lot and she shouldn’t invite Jackie because she is running her mouth too much. Joe is afraid of Teresa because he thinks she will explode if she keeps getting provoked with this drama.

It is Melissa’s big day and everyone is talking about the party, which is in the dazzling city. Dolores and Frank are talking about David and him possibly attending the party. There is a fat chance that will happen! Jennifer tells her daughter that she will apologize, and they act out an apology, and her daughter corrects her mom about the right way to do it!

Melissa looks fabulous in her jumpsuit. Everyone is all glammed up for the party. I love how Marge just owns her unique style. She comes in a pink flapper looking pantsuit, and I don’t particularly care for it myself, but I respect her individuality. Ramona from RHONY shows up for the party and says she is 20 years older, and Melissa corrects her, saying you are 62! Boom! I like it when Ramona gets a taste of her own medicine!

Melissa admits she is drunk and tells Teresa that if she didn’t act like a crazy bitch they would get along! I guess she is allowed to say that since she is drunk and it is her birthday! Marge Sr. is there, and she has been a real partier recently. Marge claims her mom has always been like that since her childhood. Bill tells Jennifer he is going to make sure she only has one drink. Right buddy, uhhhhh good luck with that one!

The video is still a topic of conversation. Can someone please just delete it from Instagram?! Teresa says anyone apologizing to Jackie makes her sick and she still has a lot of venom for her from last season. Jackie just says what she thinks and doesn’t sugarcoat it, and Teresa can’t handle her candor. Jennifer is definitely drinking more than one drink with multiple tequila shots. After a few drinks, she is ready to apologize? That is a big change from the past season where she incessantly insulted the women after too many cocktails.

Marge and Dolores think she is “apology challenged,” which I tend to agree with while she has been drinking. Jennifer and Jackie make up, and so now Teresa and Marge are talking about the Danielle situation. Jennifer mentions going to Jamaica for her birthday and she says Bill is paying for it. Melissa’s dance party starts and she tells the DJ to play “On Display!” They all “Slap Melissa’s booty!”

We are off to Jamaica next week, and there is a lot of rum there, so it should get very interesting….