Home Below Deck Below Deck Recap: Rhylee Butts Heads With the Guys After Joining the Crew

Below Deck Recap: Rhylee Butts Heads With the Guys After Joining the Crew 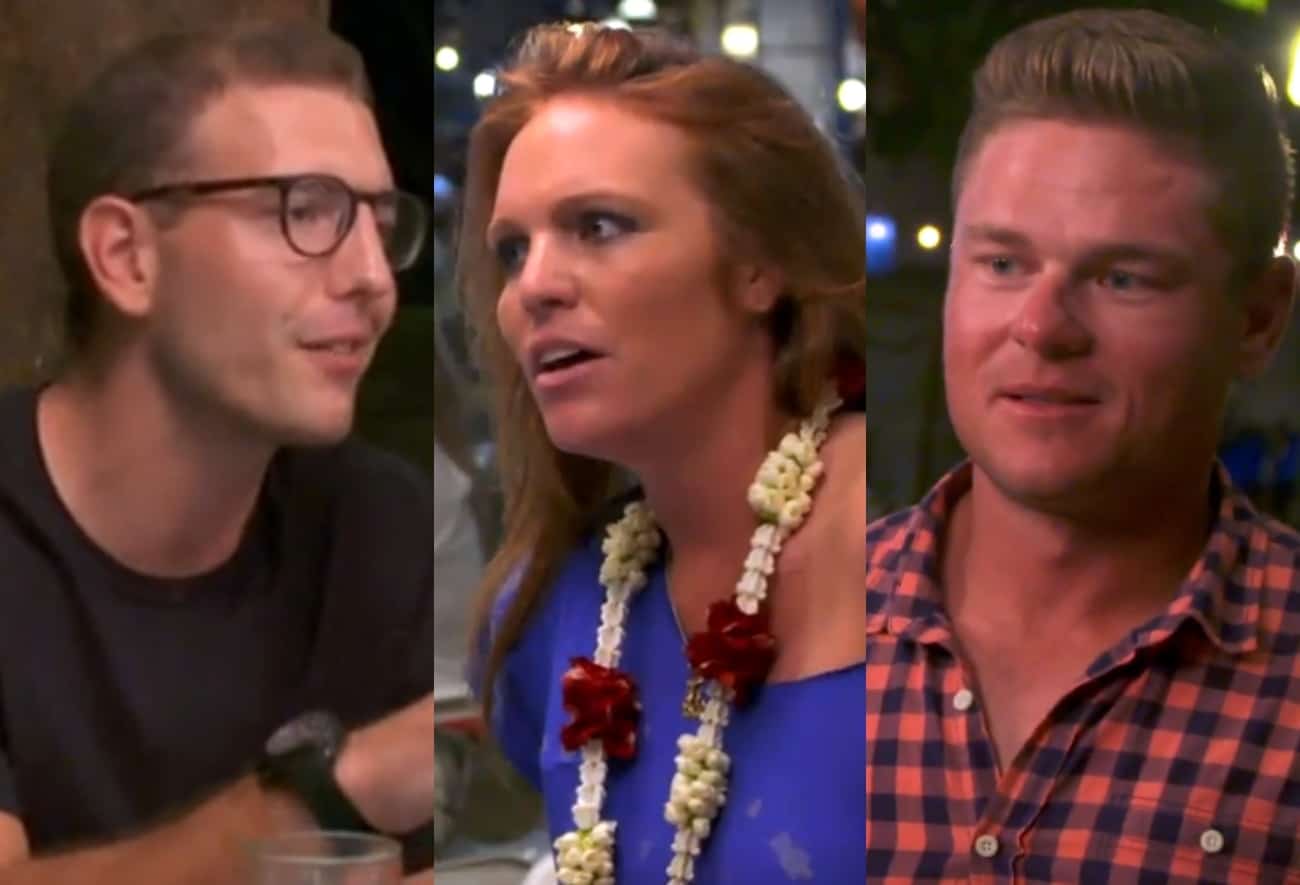 On this episode of Below Deck, adding Rhylee as a deckhand does nothing but rock the boat.

Captain Lee breaks the news to Ashton that Rhylee is coming on board as the new deckhand. Ashton is stoic, but Captain Lee makes it clear that he doesn’t really give a sh*t if Ashton has personal issues with Rhylee. Hands are needed on deck, especially for this charter’s pirate party. Duh.

Yea, that’s right. A pirate party. These guests are absolutely unbearable, particularly the primary, Michael. He is gross and won’t stop hitting on Simone, making it incredibly uncomfortable to watch.

Ashton lets Brian and Tanner know about the newest deckhand. The boys, upon hearing that Ashton has worked a previous charter with Rhylee, tease Ashton and ask, “Is it somebody you’re interested in?” Without skipping a beat, Ashton responds, “That’s a hard no.” And that’s a strong statement coming from a guy who loves seeking out women.

When Kate finds out that Rhylee will be joining them on board, she’s excited. I guess they really will take anyone. Chef Kevin has gone really wild by jumping on the theme party bandwagon and rocking his pirate hat, but his sense of humor stops there. He is agitated that breakfast service is slacking and he goes as far as bringing deckhands on to help. Naturally, this irks Kate, and that’s the beginning of the end for those two.

Rhylee comes on board and she is ready to rock. Her shorts are too short. Her smile is too big. And she needs a bra. I can tell already that she is not gonna come in quietly, which is hard considering the rest of the crew gets along quite well…minus Kevin.

Captain Lee has some concerns about Rhylee. “I hope she doesn’t let her dump truck mouth” get her in trouble. Fingers crossed! When Captain Lee calls Ashton up to welcome Rhylee, the two exchange an awkward hug. Captain Lee tells Ashton to “treat her like one of the guys” (that you would potentially bang) and off Rhylee goes to get changed/meet the rest of the crew.

Brian is still doctoring his knee injury, and when Rhylee comes in contact with him, she states, “Everything about Brian screams sexy to me.” Really? Even his infected, swollen knee?! Odd. Rhylee is just throwing herself at any crew member with a penis. That is evident.

I love Brian and Courtney‘s flirtation, but it’s only a matter of time before Rhylee jumps in and tries to get Brian’s attention… Speaking of attention-seeking behavior, I am SICK of these charter guests. These people are absolutely wasted and the primary has crossed the line BIG TIME with his Simone flirtation. He legit stalks her out and says beyond inappropriate comments to her.

Wait, did he just say to Simone whilst making advances towards her, “Once you go white?” Ugh. He is so creepy and disrespectful. This sort of comes as a blessing for Kate. I mean, Simone simply cannot be around this dude any longer. Therefore, Simone is back to laundry duty. So much for getting to learn the ways of service, Simone. Kate can now relax a bit, as she does not have to babysit Simone’s every move while she irons.

While the guests are off on their sunset cruise, Ashton explains that he is very tempted by one of the charter guests. His job is his main concern, and so he pushes away any advances. Wait. How does this charter have two different theme parties on one day? #nextlevel. So much for the pirate party. Now we have a country theme? I can barely keep up. The captain joins the guests for a nice steak dinner…waittttt, who’s driving the boat?! Captain Lee looks pained to be sitting with these people and he certainly doesn’t deal with Michael’s lewd commentary. Seems miserable to me.

Kate is p*ssed at Chef Kevin…what else is new? She is annoyed that he always tries to micromanage service and oversteps his role. She doesn’t appreciate being Kevin’s “side b*tch,” but he claims that Kate simply doesn’t do her job. Kate’s frustration may lead to Kevin’s demise. She’s no joke and I def wouldn’t wanna be on her bad side.

Hooray. The final day of this sh*t show of a charter. These people can’t get off the yacht fast enough in my opinion. Everyone working on the boat is SICK of Michael. When they see him wake up in the morning, Kate says over her walkie, “All crew. Hide your wives. Primary is up.” Truer words have never been spoken. How embarrassed must his “friends” be of his behavior?! They just smile and go with it, because otherwise, they’ll never be invited on another cruise on a private yacht, ya know?

Brian’s leg is not getting better. In fact, it’s nearing a dangerous level of infection. When Ashton tells Captain Lee about Brian’s leg, the captain admits they can’t get by with a one-legged deckhand. What is with this boat?! They’ve had more doctor visits on board this season…

(Anyone catch Chef Kevin saying, “I hope his face burns off” regarding Michael’s breakfast dish. I LOLed.)

Finally, the guests are heading out. The crew, donning their whites, say their goodbyes to these tools and all I am thinking is that there better be a BIG tip. Now that the creep has left the yacht, they get to cleaning and get to doctoring. The doctor comes on board and gives Brian an antibiotic shot in his booty. Poor guy.

To kick off the tip meeting, Captain Lee pulls out yet another classic. “This charter…Wow. I think I would rather have somebody pull me through a knothole in the fence by the d*ck than have these guys back.” #preach. The tip sucks, especially because that guy Michael was awful the entire time. Captain Lee doles out the tiny tip and tells the crew to get to work. They only have a few hours before they head out on the town.

Why is Kevin in such a good mood? Evidently, the small tip ain’t gonna bring him down. Later, Brian hangs back, much to Courtney’s dismay, and the rest of the crew hits the restaurant. They sit down for dinner, toast the charter, and start to order their food. They put Kevin in charge of putting in their order when Rhylee asks, “Can you order something Paleo?”

Kevin and Rhylee begin butting heads (because Kevin is annoyed by Rhylee’s seemingly unnecessary request) and the rest of the crew half ignores them, and half looks on in embarrassment.  All I am thinking is how are they ever going to cover this bill with that sh*t of a tip they were left? Better go easy on the appetizers…

Rhylee doesn’t know how to just be calm and Kevin suggests that she simply “eat a d*ck” instead of worrying about her Paleo options. Rhylee is crass and Kevin doesn’t let it go. They bicker back and forth and it is clear that Kevin has finally met his match. They butt heads about nothing and Ashton walks Kevin away from the situation. It’s only day two of Rhylee being here and Ashton will not stand for it. He lets her know that she is new, and suddenly, upon Rhylee coming on board, there is drama. Coincidence? I think not.

I am concerned for Rhylee. Mainly because it appears as though she left her pants at home. Ashton laughs in her face and calls her a “joke,” which she takes horribly. He also tells her that she doesn’t belong on their yacht. Instead, she belongs, “on a fishing boat in Alaska.” Hopefully, she takes his advice and leaves. Bring the drama with you, Rhylee.