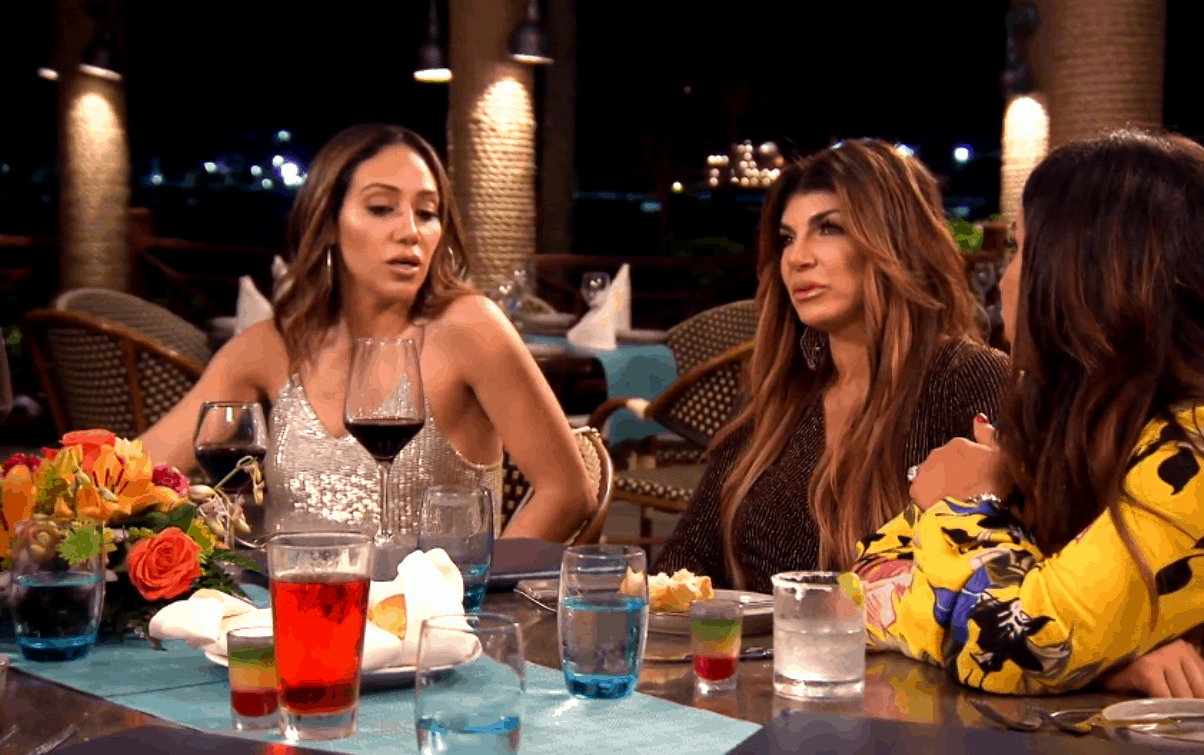 The Real Housewives of New Jersey are heading to Jamaica this week! There will be lots of alcohol paired with some crazy b****s! So what could possibly go wrong??

Jackie and her kids go to Jennifer’s house for a play date, and Jackie feels like Teresa is bullying her, but Jennifer is not buying it. She thinks Teresa is holding a grudge, which is frankly an understatement! Jennifer is definitely trying to maintain her position on this show by being Teresa’s “friend”.

Margaret talks about her lawsuit, which is refreshing since other real housewives don’t own that part of their reality. Melissa and Joe are meeting with a fertility doctor, which I don’t understand at 40 when you already have three kids. It almost seems like some people just like lots of chaos in their life… and also coming up with new storylines for Bravo!

When Jennifer arrives with her children at Jackie’s house for the twins’ birthday party, it is quite clear that they are not on the same page regarding children’s birthday parties. It is amusing to see Jennifer’s kids look at Jackie’s kids like they are zoo animals!!! They are just playing basketball outside at a birthday party like most kids would do. Jennifer seems to see the “birthday party” as a competition on who can throw the most elaborate bash for their kid. I must ask “who are these parties really for?” We should assume Jennifer’s kids do not prefer to play outside since the boys don’t seem to get the concept of playing basketball and Gabby keeps asking to go indoors since she is not an “outside person”. That sounds like she is mirroring her mother’s personality.

The ladies are packed and ready to go to Jamaica! Jennifer loves saying “yeah mon” all of the time and rides around on some sort of scooter in the airport. Margaret says, “Jennifer is so embarrassing it makes her vagina hurt!” Maybe Marge’s mortification manifests itself into vaginal discomfort?? I have to say I do find her really funny when she talks smack about Jennifer, but it is pretty hard to top the monkey’s a**hole comment!! They check out of their accommodations, and both look really nice, but you can tell the villa has more bells and whistles and so there will be some jealousy over the rooms. Jennifer the “host” likes to pretend she planned this trip. We all know who is behind the fourth wall!!

Jackie thinks Teresa (AKA production) is behind the room assignments since she knows she wouldn’t want to share a room with her. Jennifer also discusses how Jackie doesn’t eat, which I am sure will come back to haunt her since that is obviously a sensitive subject. Dolores tells Teresa, Melissa, and Jennifer that she doesn’t see Jackie as a friend. Dolores thinks Jackie gets offended easily and wasn’t brought up like them. She thinks because Jackie doesn’t randomly have family stopover unannounced she is not her cup of tea and she is too regimented. I guess Dolores and I wouldn’t get along either since I like knowing when someone is coming over. She of all people shouldn’t judge when she still lives with her ex-husband, and she has a boyfriend who just doesn’t make time for her.

The ladies are getting all dolled up for their evening plans and they are all boobs out! They are meeting up in Jennifer’s villa to partake in rum tasting, which looks amazing! Margaret thinks the villa looks like a palace versus their (Presidential suite) servant’s quarters. These ladies almost remind me of jackals with how they circle each other and try to find their weaknesses. They throw around the gorgeous comment too much, which comes across as insincere.

During the rum tasting, Jackie makes a random comment that “Jewish girls don’t give blow****”? Okayyyy didn’t know that one… Jennifer who has to one-up everyone and she says that she and her husband make an appointment so she can have an orgasm??? I have heard of date night but an appointment to come?!! Margaret gave Teresa a bit of a zinger that may or not be intentional about having a minimum age requirement of 21 so it’s not considered jailbait. Teresa, of course, has her usual delayed reaction to an insult, which is normal for her. There is rum-infused steam coming out of Teresa’s head after she comprehends that she has just been insulted, and she gives a serious side-eye to Margaret!

They do some Bob Marley shots before dinner then baby talk. Melissa tells everyone that she is thinking about having another baby. Dolores is back peddling about David and not looking for a commitment now or pretending not to. I don’t believe that for one minute. Their relationship, if you can call it that, is almost like they are just having booty calls. He ignores her calls and doesn’t show up for events. The doctor’s defense has been discredited since Bill shows up most of the time. He is a practicing surgeon as well. David doesn’t make her a priority and you can tell this is a sensitive subject for her.

Jackie comments that Frank doesn’t like her. Jackie tells Dolores that she doesn’t appreciate Frank’s comments regarding her female lawyer type. She would have thought that Dolores would have defended her as a friend would do. Jennifer, aka sh** stirrer, says she doesn’t consider her a friend! I think Jennifer is the wrecking ball of friendships this season! Jackie is a fool if she thinks any of these women are actually friends. This turns into Teresa vs Jackie, which is like beating a dead horse. They agree to a truce for now, but I am not confident that it will last long. They survive dinner this night without too many causalities…Next week looks like war again and insults are being hurled…..