Home Below Deck Below Deck Recap: A Smokey Galley, Rough Seas, and Crew Disconnect Makes for a Rocky Charter

Below Deck Recap: A Smokey Galley, Rough Seas, and Crew Disconnect Makes for a Rocky Charter 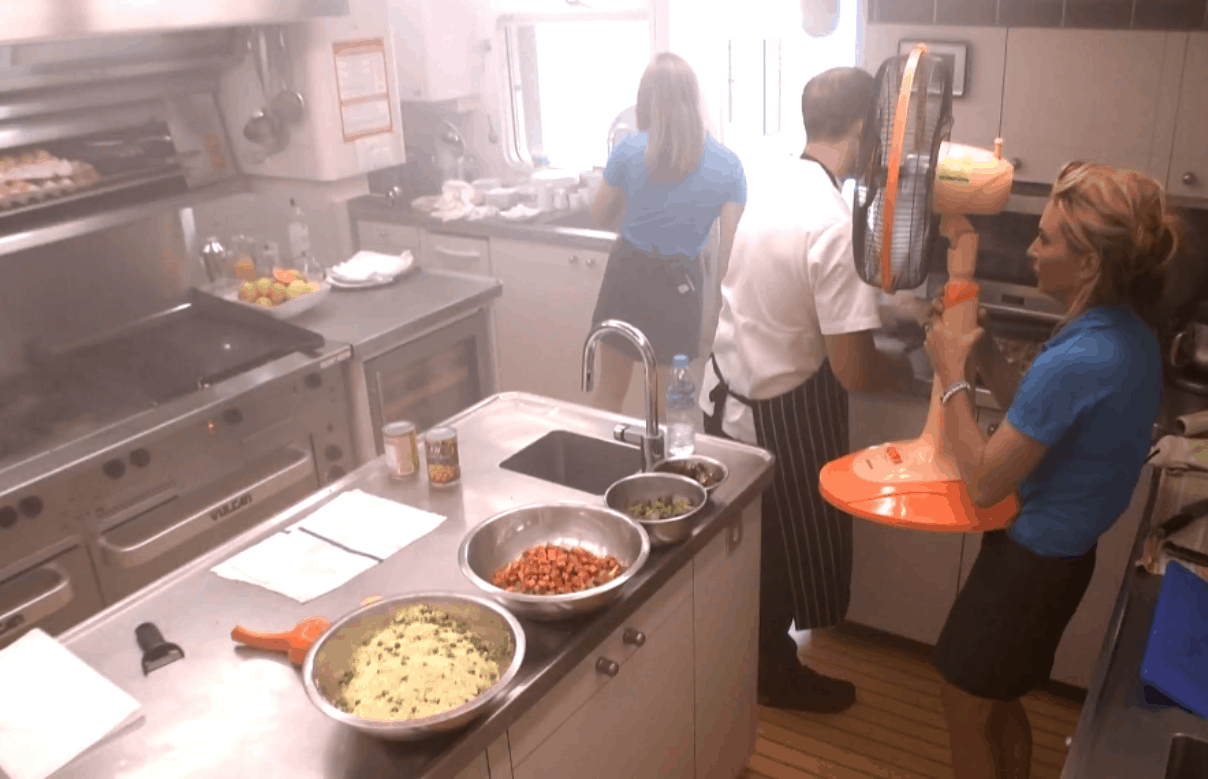 On this episode of Below Deck, the crew attempts to wow returning charter guests, but the plan backfires in a big way. It’s only 10:01 pm and this crew are absolute messes after a long night of drinking. Kate  is p*ssed that Brian called her a b*tch. Ashton is cursing up a storm regarding Kate’s childlike behavior (she threw everyone’s clothing on the floor in anger). In the meantime, Brian is ticked off that Courtney took Kate’s side in this whole argument. Brian was the one who really kicked off this whole “hate Kate” parade, since he actually called her a b*tch to her face, but the fight stretches far beyond just him.

Later, Simone hops into bed with Tanner and Brian hops into bed with Courtney and all is right on the yacht. Until the next morning. Things are bound to be a bit awkward after all that drinking and name calling. Captain Lee asks Kate to “join him for a cup of coffee” to discuss the antics that took place. He straight up tells Kate that he is not gonna deal with her behavior from the night before and makes it clear that he is “bitterly disappointed.”

It’s time for a preference sheet meeting. Captain takes this time to address expectations with Ashton, Kate, and Kevin and then proceeds to distribute the 411 on the next guests. This charter is chock full of repeat guests, children included. The primary is demanding various theme parties for each night and it just seems a little extra.

Ashton addresses the mess from the night before with Kate. Kate feels as though she was called a b*tch by Brian “for no reason.” Ashton shares his frustrations with Kate about her throwing clothing and doesn’t apologize to her, despite Kate’s expectations for an “I’m sorry.”

Surprise, surprise. Chef Kevin has an issue. The exhaust fans are broken and so he is going to have to finagle his menu so as not to cause any extra smoke, smells, or heat. Yikes. As he attempts to work that out, Courtney gets a raise to second stew, and you can sorta tell that Kate did it to simply show Simone how hard work pays off. Simone phones her mother and fills her in on all of the drama onboard. She talks about the fight and about how she feels as if Kate is “evil.”

With only 90 minutes before the charter guests arrive, Captain Lee gets an email and he is not happy. He calls a meeting to let the crew know that the beach club’s DJ wants to be compensated for the damage to all of the equipment that occurred the day before. This damage was caused by Ashton cannon-balling. Looks like homeboy is gonna be using all of his tip money for some new DJ equipment. Ashton feels so bad about the damages that he even apologizes to Kate. I think hell is freezing over, since he is essentially admitting he was wrong…something he doesn’t do often.

The returning charter guests arrive…with their two children. What kind of life do these kids lead? Adopt me, please?? The anchor gets pulled up and the boat sets sail. Kevin is down in the sweat factory—I mean, galley—and he is doing the best he can in the situation he is in.

All of the crew is willing to do whatever it takes to make sure these returning guests have a better charter than they did the last time. But…things take a bad turn when…“There’s a hair on my cheese.” Whoops. So much for redeeming themselves.

Kate is busy “including the culture of the location” and the deck crew is trying to fold up the “critter pool” for like…three hours. Brian and Rhylee are butting heads left and right, which isn’t helping. Rhylee runs to Kate and vents her frustrations and Ashton warns Brian to be careful dealing with Rhylee.

Once the Thai dancer boards the yacht, things really start cooking. Kate sets the table and the Thai dancer does a great job, but Kate wasn’t prepared for the guests’ dislike of the meal. Kate relays the message to Kevin who actually agrees that he could step up his game a bit.

Before bed, Tanner makes sure that he is on the same page as Simone…and that just means Tanner wants to keep things casual. Eyeroll.

Seems as though this “yacht turned into a Hallmark movie.” The primary guests have decided to surprise their children with their grandma and grandpa, who happen to live in Thailand. It is an adorable reunion and things seem to be going well, until the guests are unable to actually have their beach excursion. Ashton makes the decision to nix the beach party for safety reasons, but I am pretty sure the crew can kiss a good tip goodbye. First the hair in the food, now this?

To try and fix the failing situation, Ashton and the crew are forced to rush around and get all of the water toys out and ready for play. In the meantime, Kevin is smoking out the galley. The guy needs a fan and he needs it ASAP. When the fire alarm goes off, the guests are even more put off. It’s a race to keep the guests happy, and it looks like the crew is losing.