Home Below Deck Below Deck Recap: Ashton Demands Rhylee be Fired and Kate Doesn’t Hold Back

Below Deck Recap: Ashton Demands Rhylee be Fired and Kate Doesn’t Hold Back 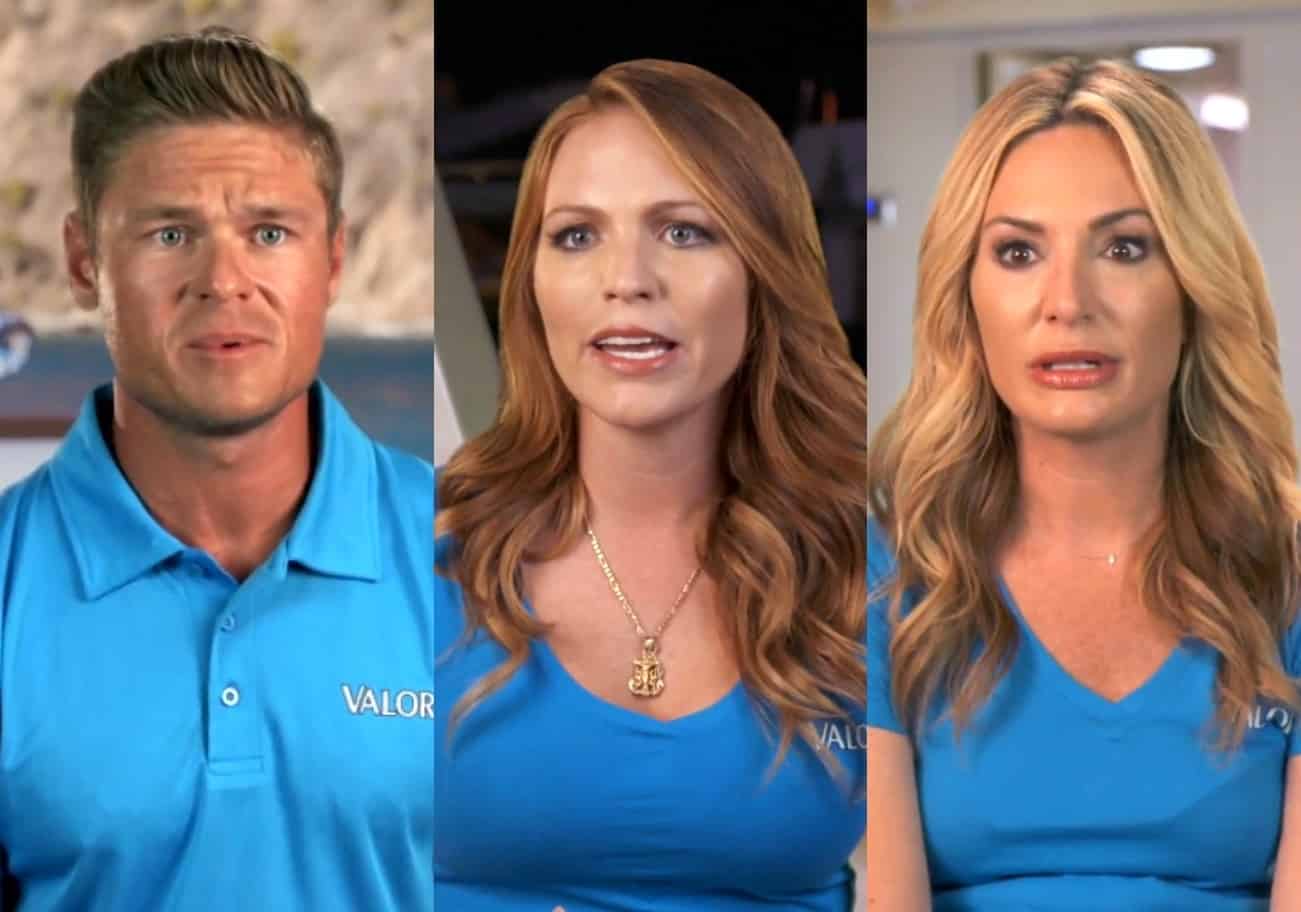 On this episode of Below Deck, the future of one deckhand is completely up to the captain.

Day two of the charter, and one of the guests, who also happens to be a chef, decides to have a heart-to-heart with Kevin.  She lets him know that basically, his cooking sucks. Chef Kevin does not take her suggestions very well and essentially lets her know that he could care less what she thinks. Now Kevin is creating enemies with the guests? Kevin takes it extremely personally. What else is new?

Kate chats with Rhylee and lets her know that Ashton was talking smack about her fishing outing. As if Rhylee needs yet another reason to be angry with Ashton… Rhylee is not shocked that Ashton threw her under the bus for the “expedition,” but she is beyond annoyed that Ashton made her look bad in front of the captain.

Speaking of Captain Lee, he is less than pleased that he had to give up his quarters because one of the guests is spoiled rotten and wouldn’t share a room. Captain Lee does not enjoy having to sleep on a couch, but he realizes it’s better him than one of his guests.

“I don’t hate Ashton, I just don’t respect him.” I gotta say, Kate, I believe that is the best way to deal with that guy. I mean, Kate and Ashton have to spend a lot of time together, and so it’s best they just get along. They are currently trying to put together a beach picnic for the charter guests. While Kate sets up, Ashton ogles the guests — Molly in particular. He is sweating her hard and suggests that instead of “crossing the line, he may brush the line.” Gross.

Post picnic, Kevin stresses over the dinner menu. Clearly the chef guest got into his head. The preferences of the guests seem to have f*cked with him and I am pretty sure I heard him say they don’t like cooking done in a Teflon pan. Wtf?

Wait, why is Ashton modeling? This “Ashton sandwich” is so bizarre. I can hardly look at Ashton striking poses and smizing. I love how Captain Lee just sits back and watches Ashton eat up the shoot. It’s embarrassing.

Rhylee is def playing the victim card. She is butting heads with the deck crew like crazy, but she feels as though she hasn’t done anything to deserve that sort of treatment. Kate seems to be #teamRhylee. She tells Rhylee that she is “kinda better at her job” than most of her crew. In fact, Kate would guess that Rhylee would be a better stew than Simone. Ouch.

Rhylee confronts Ashton and wants to know why he threw her under the bus. Ashton is so twisted that he momentarily gets p*ssed at Kate for telling Rhylee. He moves on to telling Rhylee she has issues and continues to place blame on her. Rhylee is surprisingly rather calm upon hearing that Ashton has been “tolerant” of her. She starts to flip as she explains “it’s the way of the vibe on the boat.” This conversation escalates quickly. Ashton reminds Rhylee over and over again that he is her superior. But that doesn’t stop Rhylee from telling him to “stop f*cking pointing” his finger at her. Yikes.

Meanwhile, Kevin is super proud of his ceviche dinner. And alas, the guests, particularly Chef Justine, is thrilled with his food. Kevin knows he is knocking it out of the park. Everyone is enjoying the food, which makes Kevin happy…although one would never know it because the guy never smiles, amiright?!

Side note: Why is Tanner obsessing over Kate? And, Ashton, shame on you for egging Tanner on!

Rhylee fills Kate in on her recent argument with Ashton. We find out about Rhylee’s childhood and it sounds awful. She shares that she had to remain unseen and unheard, as her mom and step-dad were bed and breakfast operators and no one wanted to be around kids. Well, that kinda explains why she is always standing up for herself…even when it’s not necessary to freak the f*ck out.

The next morning, after Tanner’s bizarro night terror (what the hell was that?!), Rhylee decides that she is gonna carry on and continue doing her job the best she can. Speaking of carrying on and doing the best job she can, kudos to Simone for acting as if she never saw Tanner naked. I am impressed by the way she handles herself around him post hookup.

Ashton runs to Captain Lee and lets him know that everyone has the same issues with Rhylee that they had in the last charter season. He spills about everything and essentially tells Captain Lee that he would like to go into the next few charters “a man down.” With there only being six days left of the season, Captain Lee is not quick to kick Rhylee out. BUT. He makes it clear that, “If you’re acting like a d*ck, that’s exactly what I’m going to tell ya.” Yea you are, Captain Lee!

Captain Lee asks to hear Rhylee’s side of the story. She is tired of the boys’ club, but she is reminded that sometimes her opinions sound like criticisms. The captain is basically holding a trial for Rhylee. He wants to talk to every member of the Valor crew before making any rash decisions about her position on board.

It’s the final day of charter, and I bet no one is as happy about that as Captain Lee. The poor guy gets his room back shortly! He is continuing his Rhylee witch hunt and asks Brian and Tanner about “the skinny” on her. Brian doesn’t hold back and lets the captain know that Rhylee “isn’t right for the crew.” When Brian explains he would rather do the next few charters a person down than deal with her, you know it’s serious.

Leave it to Kate for the swing vote. She tells the captain that she thinks Rhylee is “lovely.” She further states that “being a department head is finding ways to have your team work together,” thus making Ashton look dumb. While some of crew are crossing their fingers that Rhylee gets the boot, the captain is still trying to figure out his decision.

Later, Ashton lays into Kate for spilling what he thought was a confidential conversation to Rhylee.  “Do you think it’s right of you to get involved in the management of my crew?” Oh jeez. He is livid with her, but Kate fights back when she tells Ashton that she doesn’t think he knows how to manage his crew. Zing! Ashton should save his breath. There is no way that Kate will apologize for repeating what he said about Rhylee in front of the captain. Things are just getting worse and worse with these on-board relationships.

The crew is in their whites, and like always, they line up to say goodbye. Kevin gets called out by the primary for his fantastic food, and you can tell that he is thrilled to have received such a compliment. Wait — Brian has a daughter, too? I wonder if Courtney knows that!

There is definitely a line drawn in the sand. Kate and Rhylee vs. Ashton and the boys. At the tip meeting, you can tell that the tension is thick. Captain Lee makes it clear as day that he is not pleased with all of the drama amongst his crew, and so he hands out the tip and leaves. Captain Lee is “fed up with all of the whining and b*tching.” Rhylee’s future is in his hands.