Home 90 Day Fiance Are 90 Day Fiancé’s Emily Larina and Sasha Larin Still Together? Find Out if They Tied the Knot!

Are 90 Day Fiancé’s Emily Larina and Sasha Larin Still Together? Find Out if They Tied the Knot! 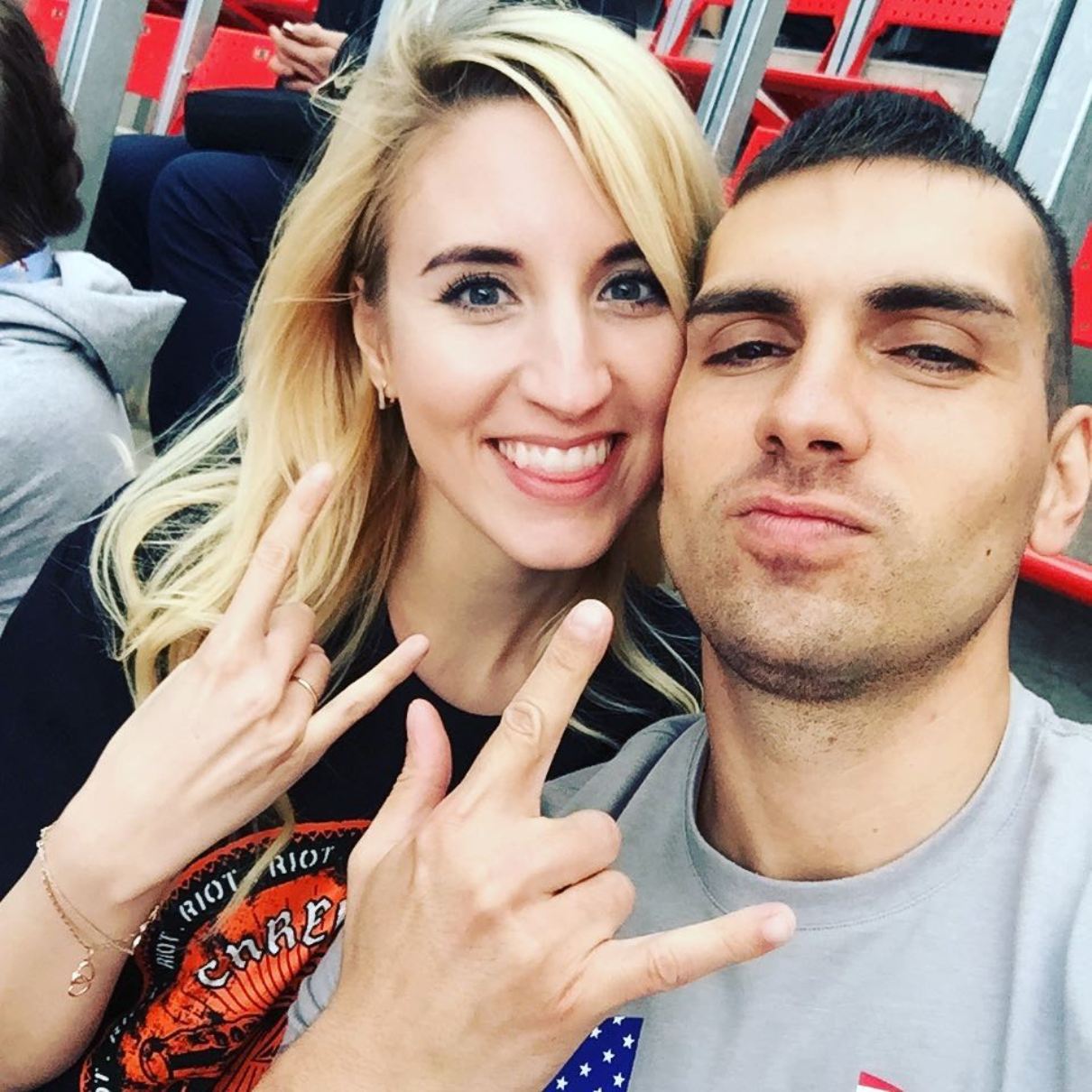 Are 90 Day Fiancé stars Emily Larina and Sasha Larin still going strong after having their first child together? Find out if the couple managed to stay together despite Sasha’s complicated relationship history.

While Emily and Sasha share a lot of the same relationship problems with their fellow 90 Day Fiancé castmates, like relocating and getting to know each other’s families, they’re the only couple who had the added pressure of raising their first child together.

At the time she met 31-year-old Sasha, Emily, a 27-year-old college graduate from Oregon, was living abroad in Russia in hopes of teaching English and traveling all around Europe. However, after meeting the 31-year-old trainer at a gym she frequented, her teaching aspirations came to a screeching halt. The two lovebirds hit it off and Emily spent her time tutoring Sasha in English while he’d help her get in shape.

While dating in Russia, Emily became pregnant with her first child — and Sasha’s third. On the show, fans learned Sasha already had two Russian ex-wives and had a baby with each of them. According to Sasha, he married his first wife, Masha and they had a child together. Then, after they divorced, he met his second wife and had a child with her (however, on the show, Masha says Sasha left her after he met and impregnated his second wife). Sasha and his second wife eventually broke up after she grew unattracted to him, according to what was said on the show.

While many fans have coined him a “serial impregnator,” Emily has continued to stick by Sasha, insisting their love was strong and able to withstand all the dramatic baggage.

On the show, Emily and Sasha’s storyline typically revolved around the impending birth of their child. Cameras were even invited into the Russian hospital where Emily gave birth. And while it was hard to watch the scared, helpless reality star struggle to understand the foreign doctors and undergo a scary cesarean section, fans were pleased to see her give birth to a healthy baby boy.

Right after the birth of their son, David, Sasha was supposed to get the baby his first passport but failed to do so, making it difficult as they couldn’t jet off to America as planned. But after six months of waiting for the paperwork to process, the couple was finally able to move to Emily’s native Oregon to live with her sister Betsy while they got on their feet.

While leaving Sasha’s family and his kids from his other marriages was difficult, he managed to get on the plane and head to America. But fans saw how things quickly turned sour when Sasha and Betsy began to butt heads. Sasha, an aspiring model, and fitness instructor lives a very healthy lifestyle, and after seeing the sugar cereal and unhealthy snacks Betsy kept in her house, he just about lost his mind.

And on top of this tension between Sasha and Betsy, Emily started expressing feeling uncomfortable in her own skin after gaining weight from being pregnant. She isn’t as small as she was when she first met Sasha and Betsy believes Sasha is being too hard on her sister, forcing her to lose weight. Between that and the fact that Sasha has to work part-time as a trainer and take care of the baby while Emily finds another job, the couple has a lot of difficulties to face in America.

So, have Sasha and Emily managed to work through their issues and remain together to this day? Based on their presence online, it looks like the couple is still together and even got married in America! This may have been obvious to fans given that Emily adopted the “female” version of Sasha’s surname, Larina from Larin.

“I haven’t changed the name on my passport yet ????????. But I wanted to take this username before anyone else. Also, I love my fam ❤️ #family #happiness” the TLC star wrote in her Instagram post in February of 2019, implying she and Sasha tied the knot as she adopted his last name. 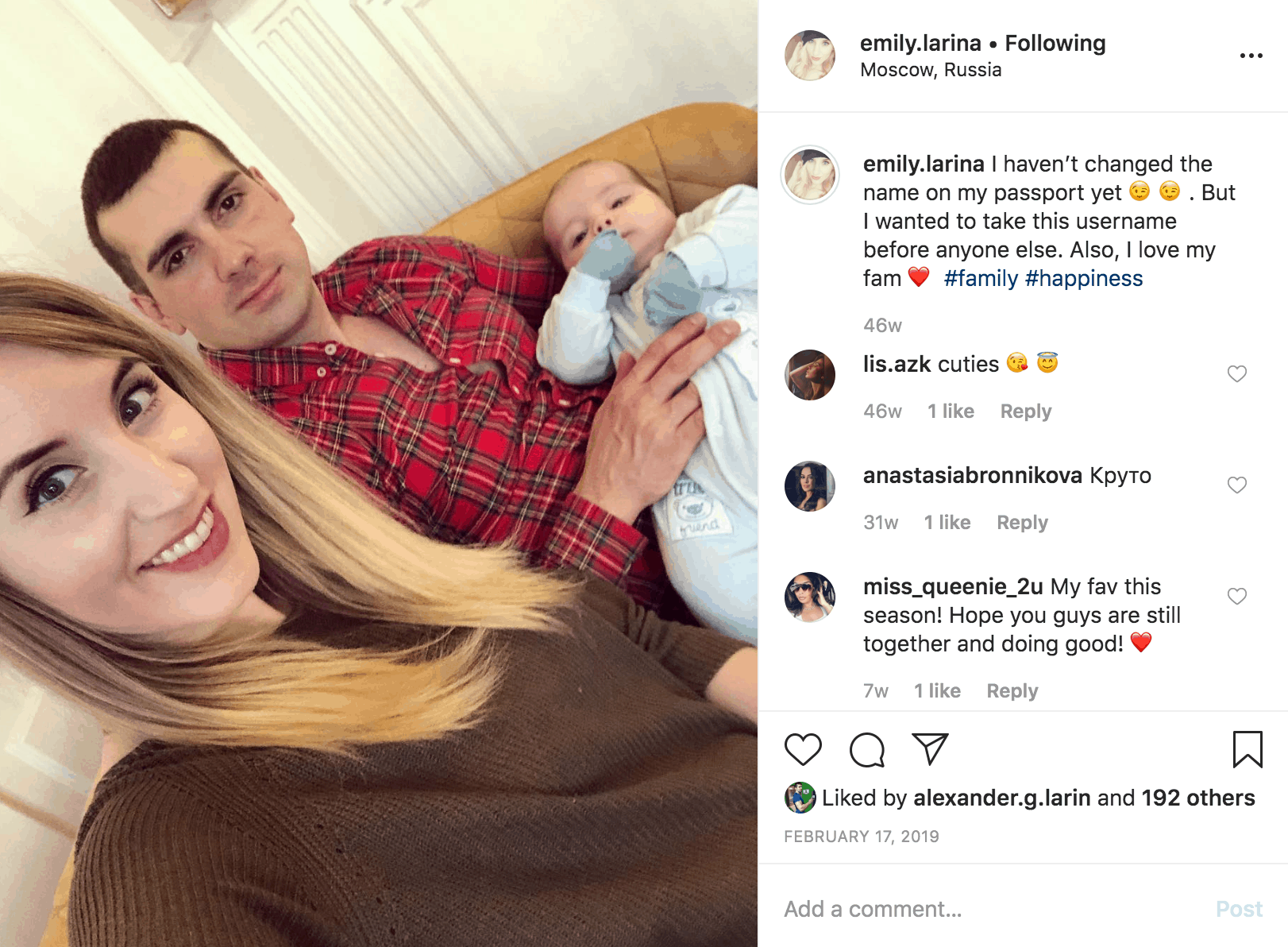 Emily and Sasha also appear to still be living in Portland, Oregon based on the fact that many of their recent pictures have been taken there.

“My sunshine ☀️ thank you for capturing this gorgeous photo” Emily wrote alongside a pic of her holding David in Portland, Oregon on December 29, 2019. 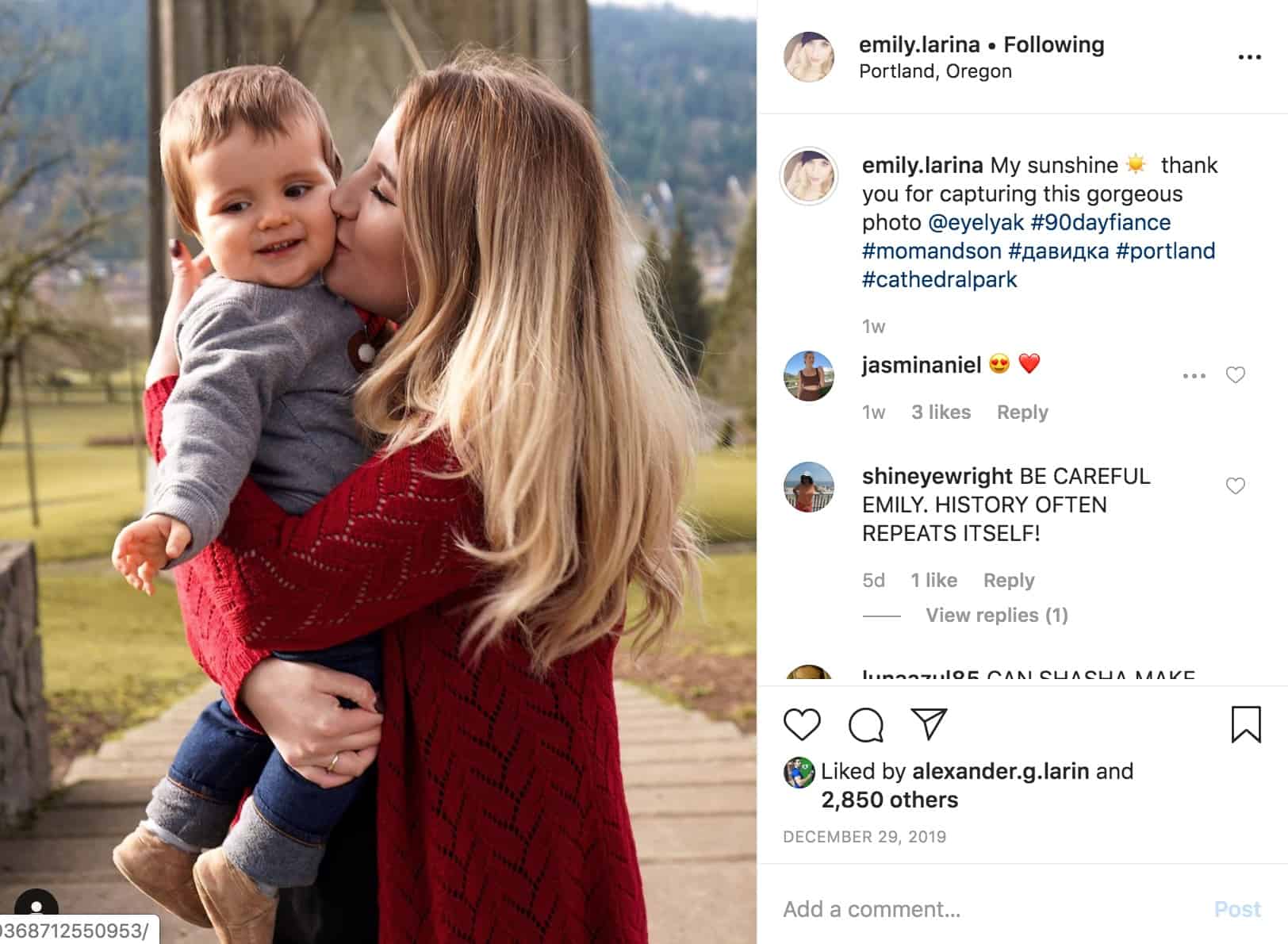 While Sasha’s Instagram page is primarily dedicated to his fitness training, he still posts pictures of him and Emily from time to time, proving they’re still happily together.

“Sometimes you need to clean your mind from negative emotions. The best way is just walking around and enjoying the beautiful nature” Sasha wrote alongside a sweet picture of him and Emily in Lake Oswego, Oregon just three weeks ago. 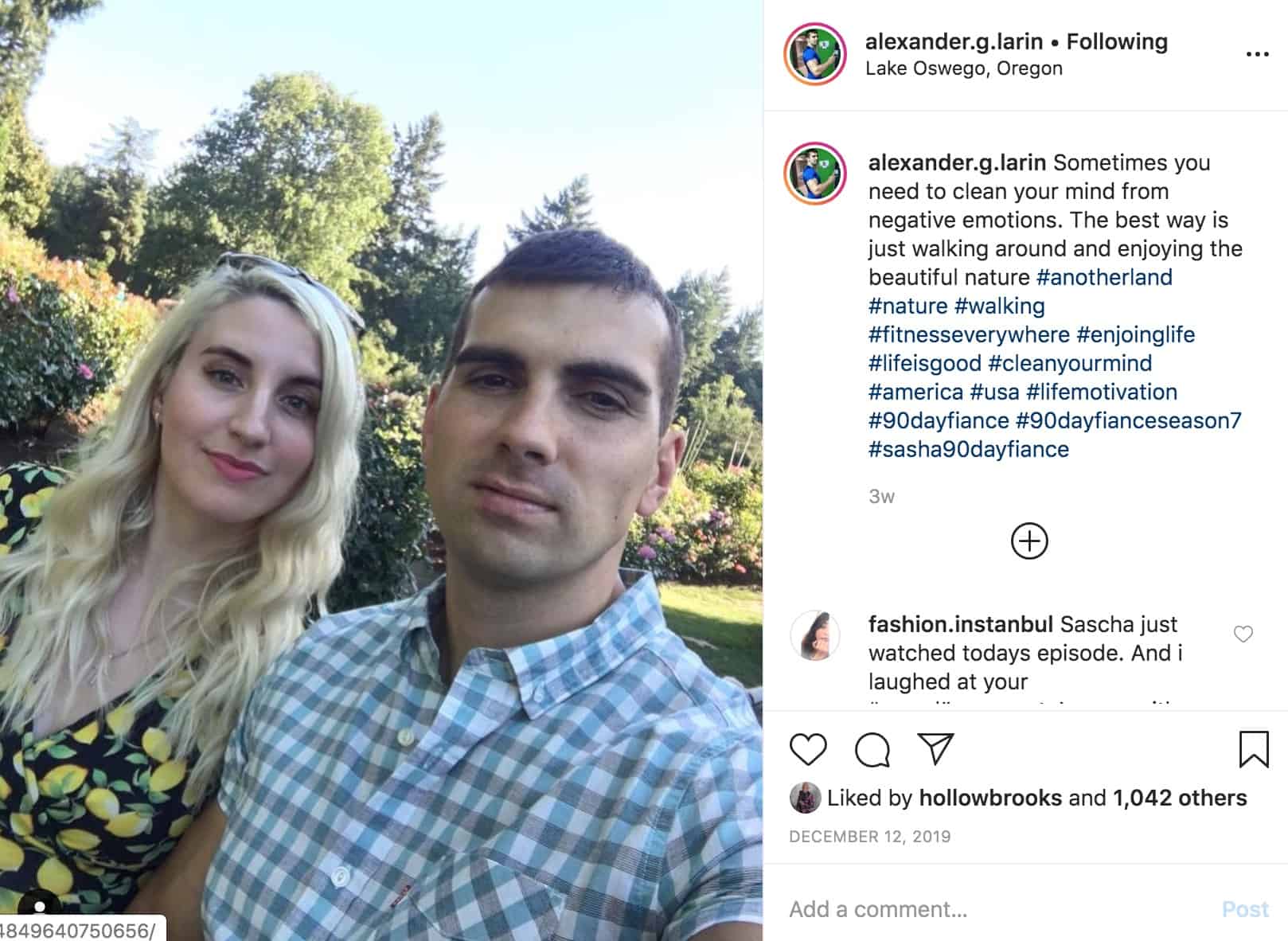 Wondering if Sasha and Emily’s costars  Anna Campisi and Mursel Mistanoglu are still together? Find out here!