Home Below Deck Below Deck Recap: Kate Causes a Raucous On Board and Rhylee Loses it on Ashton (Again)

Below Deck Recap: Kate Causes a Raucous On Board and Rhylee Loses it on Ashton (Again) 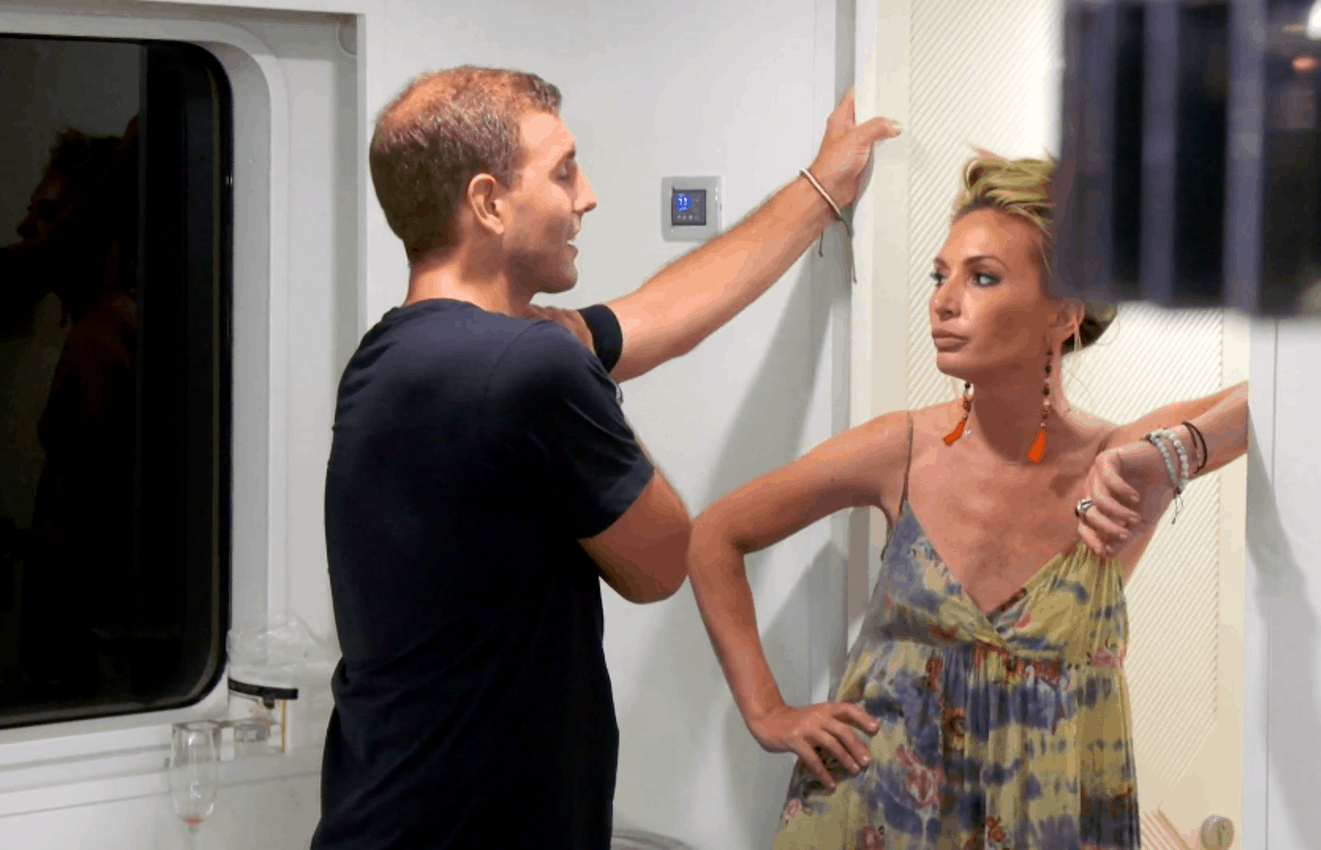 It’s turning into boys against girls on this episode of Below Deck.

This is the stuff nightmares are made of. On day two of the charter, Chef Kevin has seriously hurt his back and in the words of Captain Lee, “We’re just f*cked.” Teh, the mysterious first mate, is back helping Kevin, but it appears as though not much is gonna assist this guy. He moans and he groans, but Kevin is determined to get through dinner service.

In the meantime, Brian is still concerned about his awkward text message exchange with Courtney. Brian had hopes of just starting a very real conversation about what will happen to “them” post charter season. Unfortunately, he just p*ssed Courtney off royally.

OMG. The theme of tonight’s dinner is “independence divorce.” It is VERY clear that Alexis Bellino, the main charter, is divorced…based on the fact that she is humping her boyfriend non-stop, but thanks for the reminder again.

Let’s talk about the jealousy that is straight-up seeping out of Simone‘s pores. She seems FURIOUS that Kate is flirting with Tanner and Tanner is essentially salivating over Kate in front of his ex-boatmance, Simone. The captain joins the guests for dinner while Kate chooses to flirt with Tanner over helping out Kevin. What else is new? Simone’s blood pressure rises as she talks to Rhylee about the budding relationship between Kate and Tanner. In other news, Brian and Courtney appear to have made up…wonder if they will finally have sex now?

It’s the last day of the charter and Kevin seems to be healed. Thank goodness. When Tanner finally makes his appearance on deck after sleeping in, Rhylee is livid. The double-standard is next level and I don’t blame her for being so annoyed.

The guests prepare to leave and the crew gets into their whites. The tip envelope looks pretty hefty, and once they gather in the crew mess (after excluding Rhylee from a seat at lunch), they are given their cash and told to grab some dinner for the night. The new guests will be on the boat tomorrow morning, so they best not rage too hard. HA.

Whilst cleaning up, Ashton and Rhylee begin going at it….yet again. “You’re getting a bit of an attitude on you.” I feel like this is Ashton’s favorite line to say to Rhylee. These two are like oil and water. Forever butting heads. Rhylee has requested to work alone for the remainder of the day and I feel like this may be the best option for the tension on board.

The captain calls in Kate, Kevin, and Ashton for the run-down on charter #9. The last one of the season! Seems like this is a pre “bachelorette” party, and the primary requests dirty-named drinks to celebrate. Oh. And a penis cake. Or something like that.

Simone likens the whole Tanner hook-up not working out to her past. She explains that she hasn’t had the best track record with guys, starting with her own father who abandoned her family. Simone talks to Rhylee and makes her anger known. Should make for an interesting night.

On the way to dinner, Rhylee goes on and on and on about Ashton and how he doesn’t give her a chance in the girls’ cab. Already, it is a very divided crew, and as they disperse throughout the night market, things just keep getting weirder and weirder.

I mean, take this statement from Rhylee: “I want a scorpion on a stick in the worst way.” WHO SAYS THAT? How brave are Kate, Simone, and Rhylee? They are chowing down on these bad boys and Kevin is buying fried crickets for the next charter guests. OMG. Naturally, Rhylee begins starting in on Kevin. She calls it “scorpion gate” and is beyond annoyed that Kevin bought up all of the scorpions before she had the chance to snatch some more. Who knew scorpions could cause such RAGE in a person?!

Rhylee begins seeing red. She is p*ssed that Kevin is talking about her to the boys. She starts calling Ashton every name in the book cuz he is the leader of the boy band. It is very clear that she hates Ashton’s guts. The boys seem to think Rhylee is crying for attention and Simone tries to stick up to her. It’s legit becoming boys vs. girls. Now Courtney and Brian are fighting?! Somewhere in the midst of this chaos, Brian evidently yells at Courtney for sticking up for Rhylee, thus causing her to experience waterworks. Courtney explains that she is “not used” to having someone yell at her and that Brian let her down by being “mean” to her.

Ragin’ Rhylee is on a roll. I love it when Kate tells her to “please stop talking” and that she’s had “plenty of time” to be upset. Hilarious. Rhylee doesn’t really like it and straight-up tells Kate to “get the f*ck off of my jock.” Where did this person come from?

The boys seemed to have a lovely ride home, exchanging friendship bracelets, whereas the girls’ van was a hot mess express. Courtney is still going on and on about Brian behaving like a “toddler,” and Simone is so far up Rhylee’s a*s cuz they are #teamhateKate. Rhylee doesn’t like that Kate told her to knock it off and Simone doesn’t like that Kate is attempting to go in for her sloppy seconds. Yeah, I am confused, too.

When they are back on the boat, the boys sit around with drinks, and Kate is not happy to hear them talking sh*t about her. Kate is throwing a fit and won’t allow Kevin into the interior. She is slamming doors and Kevin begins yelling about how “Kate’s being dramatic.” It’s all very unnecessary.

Once the captain is awake, it’s not so funny anymore. I guess all of the door slamming is what brings a shirtless Captain Lee to the deck. He calls everything that they are doing “irrelevant” and he is “madder than a p*ssed off chicken.” LOL. He gives one final door slam cuz he can, and that is how you run a tight ship.