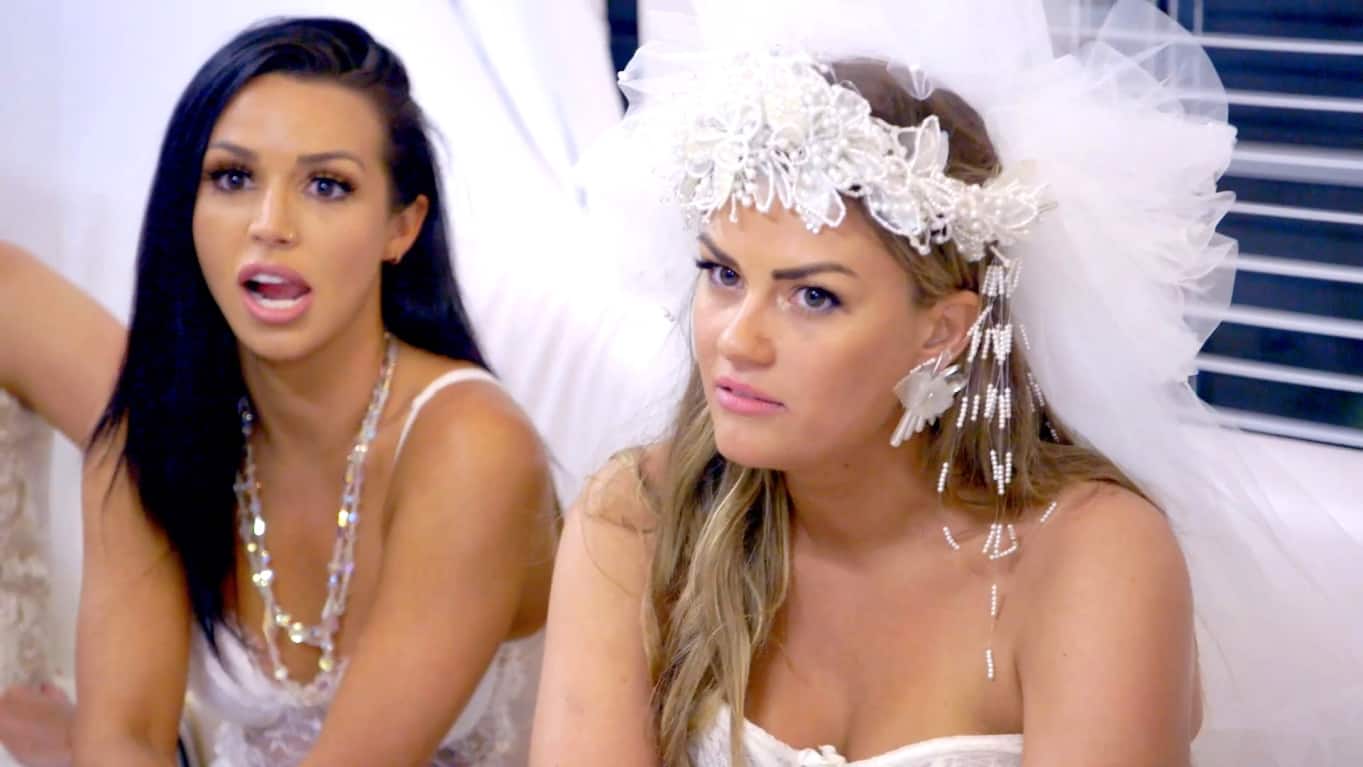 The gang takes on Miami on this episode of Vanderpump Rules.

Get a load of Jax and Brittany, the homeowner extraordinaires. It’s finally time for Jax and Brittany’s Miami bachelor/bachelorette party. Brittany is SO excited that she is actually wearing a “bride-to-be” sash AROUND HER HOUSE. Isn’t she the cutest thing?

Kristen is a “f*cking homeowner” who is “winning at life.” She claims that she is now single, however, as Ariana helps her bestie unpack (still the strangest friendship on the show to date), she finds a Carter box. She also finds out that Kristen and Carter are still having sex. Yikes. Ariana explains how awkward the Stassi/Sandoval fight was at TomTom and states that Stassi “screamed like an out of tune Mariah Carey.” #dead.

Over at TomTom, Max meets with LVP. She wants to know exactly what went down at Stassi’s book signing. LVP finds out about Sandoval’s rage text, but Max doesn’t spill all of the details. Smart guy.

The group arrives at the airport and they are off to celebrate Jax and Brittany. Jax relives the birth of “Jax,” as he used to live there back in the NINETIES with Sandoval. Speaking of Sandoval, he tries to bury the hatchet with Stassi. He apologizes, but then reminds her that “we don’t plan events five days in advance.” So much for an apology, huh?

For the boys, tonight is “Miami Rat Pack.” What does that even mean? For the girls, tonight is “dress up in the ugliest wedding dress you can find.” While getting ready, Stassi tells Beau about Sandoval’s apology. She is displeased that Ariana has been insinuating that Stassi planted her book in the airport bookstore and states that when it comes to Ariana and Sandoval, “There is like a spiky-a*s stick up their butts.” LOL.

In LA, LVP FaceTimes with Stassi, Schwartzie, and Sandoval. She is like a detective, getting evidence and hearing everyone’s side of the argument. Interesting to see Schwartzie turn on Sandoval, and watching Max listen as he sits attached to LVP’s side makes me realize that he has the potential to be a rat. At the end of the day, LVP doesn’t really care who is at fault. She just thinks the whole screaming at a TomTom event thing was totally unnecessary.

As the boys are throwing dollar bills at strippers, the girls are donning their tacky wedding dresses and getting down. All seems to be going well until Ariana pulls Scheana aside. She is irked that everyone is talking about her, but not to her. The drama is brewing.

Could Beau pick a more awkward time to have a pow-wow with Sandoval? He wins boyfriend of the year for standing up for Stassi, but I mean, not during a striptease. COME ON. Sandoval is very hard to take seriously with that stupid a*s fake mustache, but he has no problem making Schwartzie look like a fool. He calls him a yes man to Beau and explains that Schwartz doesn’t even know how to clock into TomTom. Sandoval isn’t backing down in front of Beau and spirals as Beau stands there with a dumb look on his face.

Silly me. I thought we were gonna be lucky enough to sneak by an entire episode without seeing any of the new people. Sigh. LVP talks with Dayna, and Dayna straight up tells LVP that Scheana has not been nice to her. LVP calls Scheana one of the “OGs,” but makes it clear that Scheana should not be the mean girl, as she has experienced a rough go at SUR in her beginning days.

Did I miss something? Why is Brittany scream-crying? It turns out that at one of the clubs, a sign was held up that said, “DON’T DO IT BRITTANY.” Kristen, OF COURSE, had to make it seem as though the sign was malicious and LaLa isn’t standing for it. Kristen does a fine job of winding Brittany up, while LaLa attempts to calm the soon-to-be Mrs. down. Brittany is just drunk and confused and easily swayed by Kristen, the queen witch of We-Ho.

The next morning, Jax is hurting and lies through his teeth about the strip club. I find it fascinating that these people think they won’t get caught when THEY ARE LITERALLY ON TV and getting filmed 24/7. The crew rallies and jumps aboard the three-tiered “barge” they are renting for the day.

Scheana explains to the girls how much she dislikes Dayna (aka how she is jealous of her) and Jax gets some marriage advice from his sister. In the meantime, Kristen pulls LaLa aside and wants to smooth things over with her. Kristen blames it on the booze, obvi, and lets LaLa know that she is planning on seeing Carter on Saturday. LaLa calls Kristen out for not being able to be by herself and Kristen doesn’t even deny it.

In the spirit of clearing the air, Ariana confronts Stassi. These two are both hard-headed and they are legit fighting over who gave who dirty looks. It seems very middle school.

During the girls’ dinner, Kristen sneaks out to call Carter…I legit cannot keep up with those two. I also cannot keep up with Ariana’s statement about “the many layers of miscommunication” between Schwartzie and Sandoval. Katie is p*ssed that Ariana is placing all the book signing blame on Schwartz, and we are just running in circles with this group.

When Kristen comes back to the table, Stassi lays into her. Kristen reminds Stassi that this isn’t about her, but Stassi doesn’t quit. The girls bicker back and forth in front of everyone. Stassi reminds Kristen that she isn’t 22 anymore and that she’s too old for it to be “messy,” and Katie calls Kristen a “miserable person.” I can’t really deny that statement…