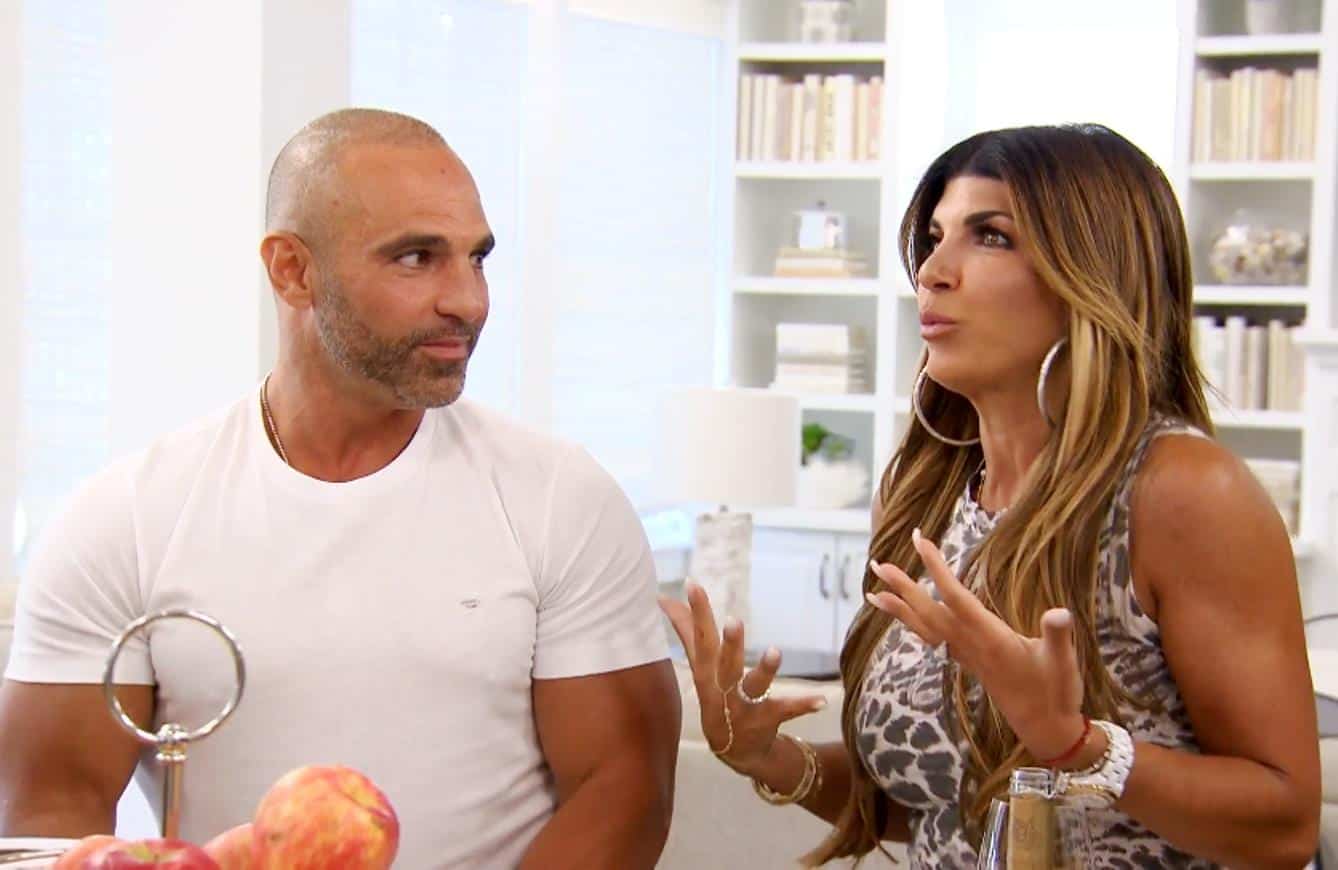 On this week’s episode of The Real Housewives of New Jersey, we are headed to the Jersey Shore and prom with Gia and Frankie! Let’s see what could go wrong on the Jersey Shore!

Today is prom for Gia and Frankie and the champagne is on ice? Teresa says she missed the eighth-grade prom when she was “away” . I don’t remember my parents serving us that when we all went to prom #overindulged. Joe Guidice calls during the prom party prep. He tells Gia that he misses them all and wishes he could be here. It is touching when Gia gets emotional when her uncle Joe brings her flowers since he is the closest thing to her dad now.

Jennifer and Bill are discussing her brother Steven and his fundraiser. Bill is still salty over Joe Gorga’s comment about not satisfying his wife. He will definitely address that at the shore with Joe. He expects an apology from Joe. We shall see…

Teresa reflects on Gia growing up and they show flashbacks. Gia does look beautiful in that blue dress and Frankie Jr. is a good looking kid. Papa Giacinto gets emotional seeing the kids leave for prom. They make a nice-looking couple. It is a very sweet scene.

Jennifer and her daughter Gabrielle go to Steven’s fundraiser. Steven has to tell his sister to behave because he knows all about “Tequila Jennifer.” He is aware his sister can be like a bull in a china shop. Gabrielle tells her uncle she wanted to come for him and he loves her for it #sweet.

Jennifer shares that her mom was 16 when she married her dad. She thinks her mom was sheltered and there was a language barrier. Jennifer says her mom had to learn our culture and traditions from them. She thinks that is why her mom is not so quick to accept her son’s sexuality. She admires her brother’s courage in standing his ground with their parents and staying true to himself. Josephine finally appears to be really proud of her very talented son. It’s about time.

UGH, after that nice scene, I have to see Danielle? I swear she is like gum on your shoe — you feel like you got rid of it but it is still there! She meets with Teresa to catch up. Danielle says things are great with Marty . Teresa shares what is happening with her family and the other ladies. She claims she is still loyal to Danielle. I agree with Teresa on one thing: the relationship between Margaret and Danielle is toxic.

Teresa mentions their shore trip. Danielle shares she is conveniently going to the shore as well. Sure you were, Danielle. I apologize if this comes across as unkind, but Danielle looks like she has been ridden hard and put away wet. She needs to stay out of the sun and avoid all human contact.

Dolores goes to the house where she will live with David. Sam the designer is bringing marble samples and a “mood board” in order to design the house. Is there a color palette for awkward? Dolores doesn’t want any of David’s bachelor furniture .

When David arrives, he actually greets Sam with more affection than Dolores. It is beyond painful watching the interaction between Dolores and David. He looks off into space when she talks to him. They have zero chemistry.

Dolores has very low standards if she thinks this is the best she can get. She asks him about the shore and he is apparently “on-call” so he can’t make it again. Bravo, David, now that is a better excuse than sniper school! She tells David about what Gabby and her family think about their relationship. He will only commit to furniture. Okay, really lame, David.

Everyone is getting ready for their trip to the shore. Evan will meet them at the shore, and so Jackie gets a ride with Margaret and Joe Benigno. Jennifer is wearing her very appropriate “Sorry not Sorry” shirt. She is definitely going into this trip with the best approach of no accountability!

Teresa gets a ride with Melissa and Joe. Joe isn’t happy with Jennifer and her childish behavior toward Melissa. Melissa shares that Danielle wants to see her when they are at the shore.

The house Dolores rented is beautiful. Dolores has cupcakes with everyone’s faces on them to mark their territory. Jennifer is looking around the house calculating the cost of everything she sees so she can make sure they get a Jersey house as well.

Everyone checks out their accommodations and I am glad there doesn’t appear to be any special treatment. They all discuss prenups and Evan signed it with no issue. Teresa feels resentment over Joe asking her to sign a prenup since he did it since he didn’t even want to get married. Wow, great way to start a marriage, he is such a romantic!

Hallelujah! Teresa finally admits Joe had a side piece who had a second cellphone.  She claims she chose to be blind to it since Gia was just three then. Production shows the clips of Joe’s philandering and Jacqueline mentioning what Teresa shared with her about Joe. “He was banging someone on his desk in front of you.” I think that might have been a red flag, honey. You should have run for the hills then.

The ladies and the guys ride in separate cars to the restaurant. The guys talk about how they get over stuff quicker than the ladies #truth.

While at dinner, they talk about going to a place called Jenks. Joe talks about seeing Melissa first in Cancun and finding out she was from the Jersey Shore. He then went to the shore each week until he finally caught up with her. Teresa used to beat up boyfriends who looked at other girls. She must have lost her mojo when she hooked up with Joe.

While I think I hear the music from Jaws, Melissa tells the group that Danielle is at the shore. Margaret senses she is close since there is a foul smell in the air and compares her to a barnacle? LOL. They discuss Dolores and Frank and his dirty dog days. Frank should have played the song by Shaggy called “It Wasn’t Me” to describe his excuses for sucking as a husband.

Melissa throws a grenade at Jennifer and tells her she is on thin ice. Dolores doesn’t understand why Melissa is still upset since she started it. I don’t think calling Jackie fiscally responsible is a dig UNLESS she hit a nerve with these over-spenders. Dr. Bill acknowledges he needs to bang his wife more. Please take one for the team, Dr. Bill!

The ladies are all chatting with their guys in the morning. Margaret says her vagina clenches when Danielle is mentioned. I thought that was Kegel exercises? All Frank can think about is eating all of the cakes and possibly losing their security deposit since Danielle is in town.

They are eating breakfast and chatting. Teresa feels regret over what she shared about Joe. Jennifer has to interrupt Margaret when she is commiserating with Teresa over their work-life balance. Jennifer says since Margaret has Joe B. she can’t relate. Margaret doesn’t think Jennifer should contribute to this conversation since what she does isn’t work. Jennifer takes offense to that since she is a stay at home mom #Outoftouch. We are left with a standoff until next week!

Next week, Bill is over-served and is carried from the truck. We have to see Danielle the again. Why oh why do we have to be subjected to that again!