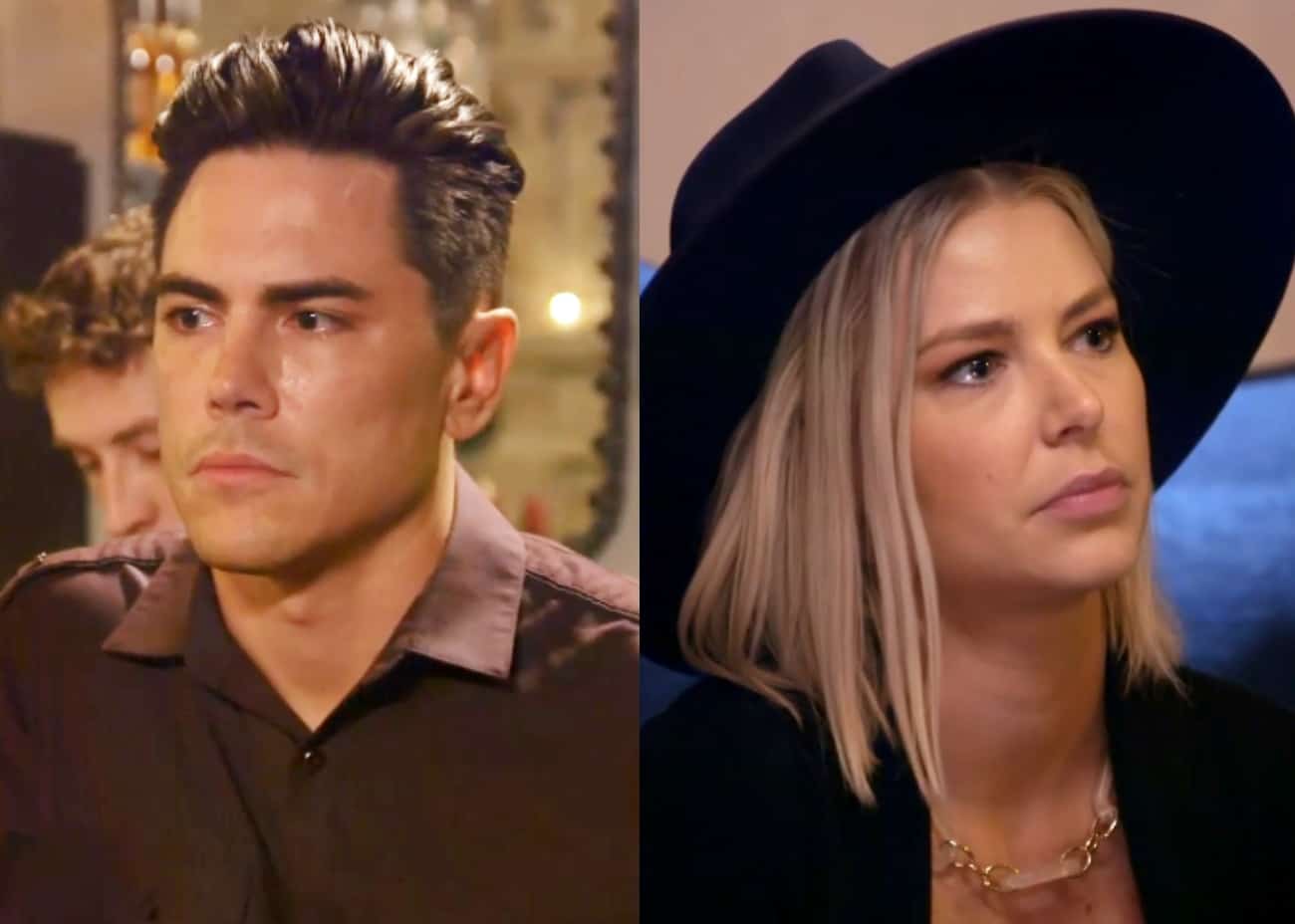 On this episode of Vanderpump Rules, the wedding planning gets more stressful as the bridal party gets rearranged.

Stassi will never stop third wheeling. She lets herself into Katie and Schwartzie’s house where she gets to meet “Dog,” the lizard. This is so weird. While Dog sits on Stassi’s shoulder, the three of them discuss Sandoval’s flip out regarding Jax and Brittany‘s homophobic pastor…who, BTW, is no longer officiating the wedding, but alas, Sandoval needed to make it clear he did not believe in the couple’s original choice of officiant.

In the meantime, Brittany and Jax continue planning their wedding of the century with Brittany’s too-tan mother. Jax insists that Sandoval has crossed the line by stirring up the pastor business, and therefore, Sandoval is kicked out of the bridal party. In fact, Jax is contemplating if Sandoval is even going to be invited to the wedding AT ALL.

The thing is, Jax is annoyed Sandoval hasn’t apologized. But Sandoval doesn’t feel like it’s necessary. He feels as though he was sticking up for Ariana, his bisexual girlfriend. Brittany feels as if she respects her friendship with Ariana more than Ariana respects it, and in turn, she becomes teary. What else is new? Anything is setting off bridezilla these days…

Can we discuss LaLa‘s house? And RANDALL! He makes his VPR debut official as he chats with his fiancée about their home renovation. Rand has made it clear that he is part of the group. I mean, he texts with Jax more than LaLa texts with her own mother. New couple alert. Randall lets LaLa know that he knows, firsthand, how p*ssed Jax is at Sandoval. No one is quite sure how this is gonna turn out…

Enter Brett. He comes to LVP‘s castle, but this time, LVP is not interested in a training session. Instead, she wants to know what’s going on in Brett’s love life. Brett explains that he got sucked in by Charli, another one of the newbies. LVP loves a good gossip session.

Over at TomTom, Schwartzie confronts Max about his exclusivity with Dayna. Instead of agreeing, Max asks what exclusive means and I think someone should throw a dictionary at this kid’s head. He claims he was “really tired” when they had the conversation…just sounds like he is really a jerk.

Later, Jax storms into SUR and pulls Sandoval away from the bar. The dudes head to the back and Jax is essentially begging for an apology from Sandoval. In true Sandoval fashion, he begins deflecting, but Jax deserves it. I mean, when have you ever really seen Jax apologize? Jax believes that this is some sort of twisted attempt to sabotage his wedding and is irked that he keeps having problems with Sandoval.

Jax blurts out, “I’m not even having my mother at my own wedding” and, just like that, Sandoval’s invitation to the wedding has been rescinded.

During a busy dinner rush, Brett gets a chance to ask Charli out on a date. She states that she can maybe “squeeze” in a date with him on her calendar. Ouch.

I am so happy to see that Jax dressed up for what seems to be a relatively snazzy double-dinner date with LaLa and Randall. Jax is fired up and cannot wait to tell the crew that not only did he take Sandoval out of his bridal party, but he disinvited him from the wedding completely.

In the midst of his anger, Jax suggests Sandoval try and figure out “what sexuality your girlfriend is because it changes every day.” Hello? Did he forget that LaLa once hooked up with Ariana? It doesn’t seem like LaLa is upset by this, especially when Jax gets down on one knee and asks Randall to be a part of *his* wedding next week. Understand that Jax is solely having him because the numbers are now uneven AND because Randall has a PJ. Duh.

While at TomTom, Sandoval tells his buddies the bad news: he is no longer invited to the wedding. Ariana is unsure if she will be in attendance now that her boyfriend has been banned James Kennedy style. Katie suggests Ariana talk to Brittany, as things have escalated quite quickly. Schwartzie reminds Sandoval that he came at Jax in an “accusatory tone” and for once Sandoval admits that he was wrong. Schwartzie starts crying, literally crying, because he has to be Jax’s best man solo, and let’s be honest, the guy’s never done a damn thing on his own.

Scheana‘s cooking her “famous enchiladas” and phones her best friend Brett to invite him over. Brett breaks the news that alas, he cannot attend as he will be on a date with Charli. You can almost hear Scheana’s jealousy and she cannot believe Brett is falling for her. According to Scheana, Brett has said Charli “does her makeup bad.” OMG. What GUY says that?! I love how Scheana is giving some relationship advice. Cuz I would TOTALLY listen to her. Brett doesn’t falter and straight up lets Scheana know Charli is what he’s into right now.

Ariana comes to Jax and Brittany’s mid-tux-try-on and Brittany tells Ariana that she was disappointed that Ariana didn’t reach out. Brittany is still sticking to the story that she didn’t see the newest comments made by the pastor.

Downstairs, Schwartzie tries to talk Jax into including Sandoval, but now that Randall’s in, it’s all pretty final. Ariana is attempting to navigate this mess, which is especially difficult because SHE is in the bridal party. With only ten days left before the wedding, Brittany is stressing.

Glad to see Charli squeezed Brett in for a quick date. She reiterates that she has never eaten pasta and I gasped again. Brett shares that he’s just a Jersey boy who is recently out of a long-term relationship. He explains that he is looking for a genuine girl, kind of the opposite of Scheana, and he lets Charli know that Scheana appeared to be displeased by this date. Way to stir stuff up.

Jax and Brittany meet with LVP and they find out some sad news. LVP tearfully shares that her mother suddenly passed away, and in turn, she cannot attend their wedding. LVP is devastated and reminds the couple that life is short and they should get their priorities in order. How upsetting, but that’s a message Jax and Brittany should hear loudly.

Tom and Tom are having a hard time because of this whole wedding debacle. When Sandoval hears that Randall has replaced him, you can tell he is upset. Schwartzie reminds Sandoval that Jax can be “a real pain in the a*s,” but at the end of the day, it is his wedding and Sandoval should do what he can to be there.

Ariana, her hat, LaLa, and Stassi grab a table at TomTom and chat about Jax and Brittany’s wedding. Stassi suggests that Ariana just go say she is sorry and LaLa straight-up tells Ariana that she doesn’t feel like “she enjoys us.”

Ariana excuses herself to find Sandoval. Sandoval had just gotten done sending Jax a text when Ariana starts crying to him. She becomes angry that Sandoval sent Jax an apology message and tearfully explains that she wants to just get in her car, drive away, and start a new life. Ariana is very low right now and Sandoval is trying to be a good support system for her. He does his best to cheer her up, but it seems like it’s gonna take a lot to help Ariana.