Vanderpump Rules Recap: Katie and Stassi Have Had it with Kristen After Shouting Match in Kentucky 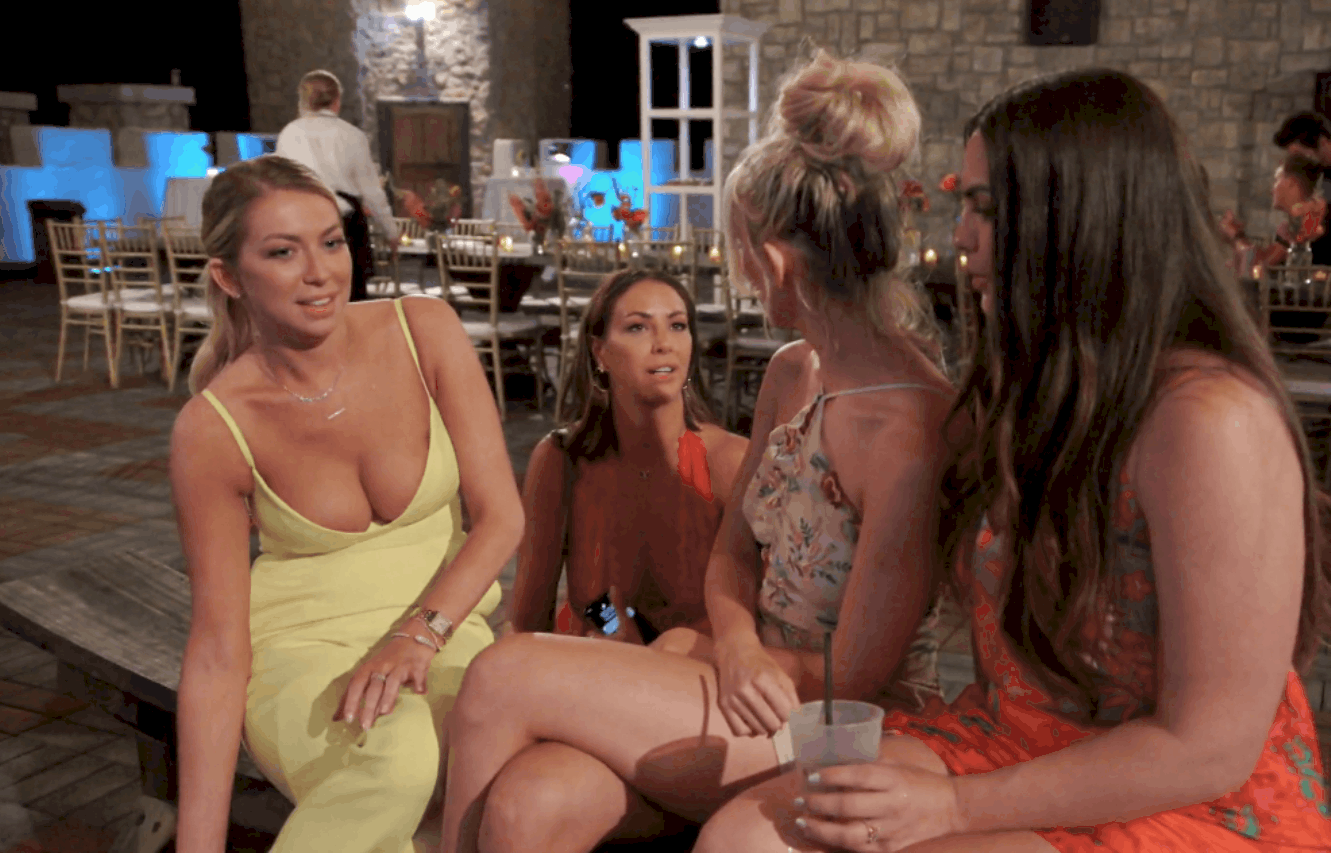 The #JaxGotItWright convention appears to be never-ending on this episode of Vanderpump Rules.

In Kentucky, it’s the continuation of the wedding of the century, I mean Jax and Brittany’s big day.  Brittany has planned a special surprise for night one…a murder mystery party. Stassi straight up dies over the entire shenanigans cuz we all know the girl loves murder and overall, the mystery is a hit.

LaLa, Stassi, and Katie will never get over the fact that Kristen is STILL bringing Carter to the wedding. They are especially perplexed when Kristen joins the group and calls Carter her “best friend ever.” I am pretty sure she has just taken a page from Scheana‘s book. Stassi calls Kristen out for not being real and exclaims that she doesn’t even know who Kristen is these days. Kristen proceeds to call Katie an “obnoxious b*tch” and I kinda have to agree with Kristen on this one. Brittany intervenes cuz there can’t be any fighting at HER wedding, ya’ll, but Katie makes it clear we just witnessed the end of a friendship.

Over in LA, Dayna discusses her exclusivity with Max…except there is conflicting story. A messenger SURver lets Dayna know that her “boo” Max was with a girl who looked kinda “thottie.” Max is caught. Upon viewing the other girl on Insta, it becomes apparent that Max is not the guy who Dayna thought he was.

As the welcome dinner night wears on, Brittany becomes irked that Jax isn’t there by her side. Turns out that Jax wanted to stay in to be with his father and his memory. If Brittany can’t understand that, she’s dumber than I thought she was.

Later on, Kristen meanders over to accost Beau and cry to him about how much she misses their friendship. Don’t forget- Kristen and Carter were the ones to introduce Stassi and Beau. Awkward. Beau explains that, “I’m growing in a relationship” and Stassi “is literally all I care about.” Kristen begins cry-yelling in a new-found Southern accent (did ya’ll hear that?!), but after a bout, Beau talks her off the ledge.

The next morning in Kentucky, Mitchell, the wedding planner, comes bearing the ashes of Jax’s father. A sentimental moment. In the meantime, everyone is nursing their hangovers and Kristen is the topic of everyone’s conversation. Beau lets Stassi know that Kristen went in on him. He tells her that Kristen was annoyed at Beau for calling Stassi his number one. Stassi is exhausted by this “friendship” and makes it clear that once the wedding is over, so is her relationship with Kristen.

A few minutes later, Schwartzie and Jax bust in on Stassi and Beau. Schwartzie lets Stassi, Beau, and Jax know that he didn’t have a marriage license for his wedding to Katie…so technically, they may not even be officially married. WHAT. So…that means that Jax is the first of the group to be a husband?! Just when we thought these people couldn’t be more immature…

This pool party is amazing. They are doing pedicures and having cocktails and I want to be invited now. Except not have any of the guests there. Scheana fills LaLa and Ariana in on the newest James drama. The update is that James will be attending AA meetings. Scheana heard that first-hand from Raquel . LaLa decides that she is gonna have a chat with James about that sober life.

In West Hollywood, Dayna is about show Max what is up. She confronts him about the thottie and wants answers. Max tries to explain that, yes, this girl moved to LA (for him), but it’s not his fault that the timeline is wonky. Max says that he feels awful about the whole situation and Dayna shuts down the relationship completely. She dunks his necklace in the toilet, runs it through the litter box, and then hands it back over to him before he leaves her apartment. And he has NO idea. Ha!

It’s time for the welcome dinner, ya’ll! This is like the longest welcome weekend I have ever seen. Rand, the newest groomsman, showed up and he maintains his position as the best one in the bridal party because he comes bearing the best gift: LVP and Ken. Surprise!  Turns out that LVP’s mother’s funeral is pushed back and therefore, she can attend the wedding afterall.

Jax gets a minute to chat with LVP about Lexington’s gay pride parade (and the “irony” of it all) and the glaring fact that his mother is not invited to the wedding. He calls LVP his “alternate parent” and you could kinda see LVP grimace at that.

I think it’s rude that Stassi is running around telling people that Katie and Schwartzie are not legally married. It’s not nice and not funny. It’s straight embarrassing, especially when Stassi skips over to LVP and spills the tea.

The newly single Max is holding it down at TomTom when the newly sober James pays him a visit. The guys discuss the Dayna drama and Max is super p*ssed that everyone has been all up in their business, especially Danica. James one-ups Max by letting him know that Raquel laid down the law: she wants him to go to an AA meeting, but Jax…well, in his words, “I don’t want to do it.” Nice.

‘Twas the night before the wedding and Jax promises his fair bride-to-be that he will curtail his drinking. Famous last words. All the ladies are decked out in their onesies and Brittany explains that she was just raised on everything “princess,” which is adorable, but also kinda weird because she is like 30. They have cute little twerking contests and wind down in a responsible way.

Meanwhile, in the dudes’ room, Beau comes donning a knight’s costume cuz he’s the man and the drinking commences. I mean, commences in a big way. Jax is annihilated and I would have to say that’s not the smartest move the day before your wedding. Although wasted, Jax slurs that Brittany is the best woman for him, despite the issues that they ran into along the way. Man, re-watching those rocky patches reminds me what an absolute a-hole Jax was to Brittany.  Let’s just hope that he stays true to her over the course of their marriage!