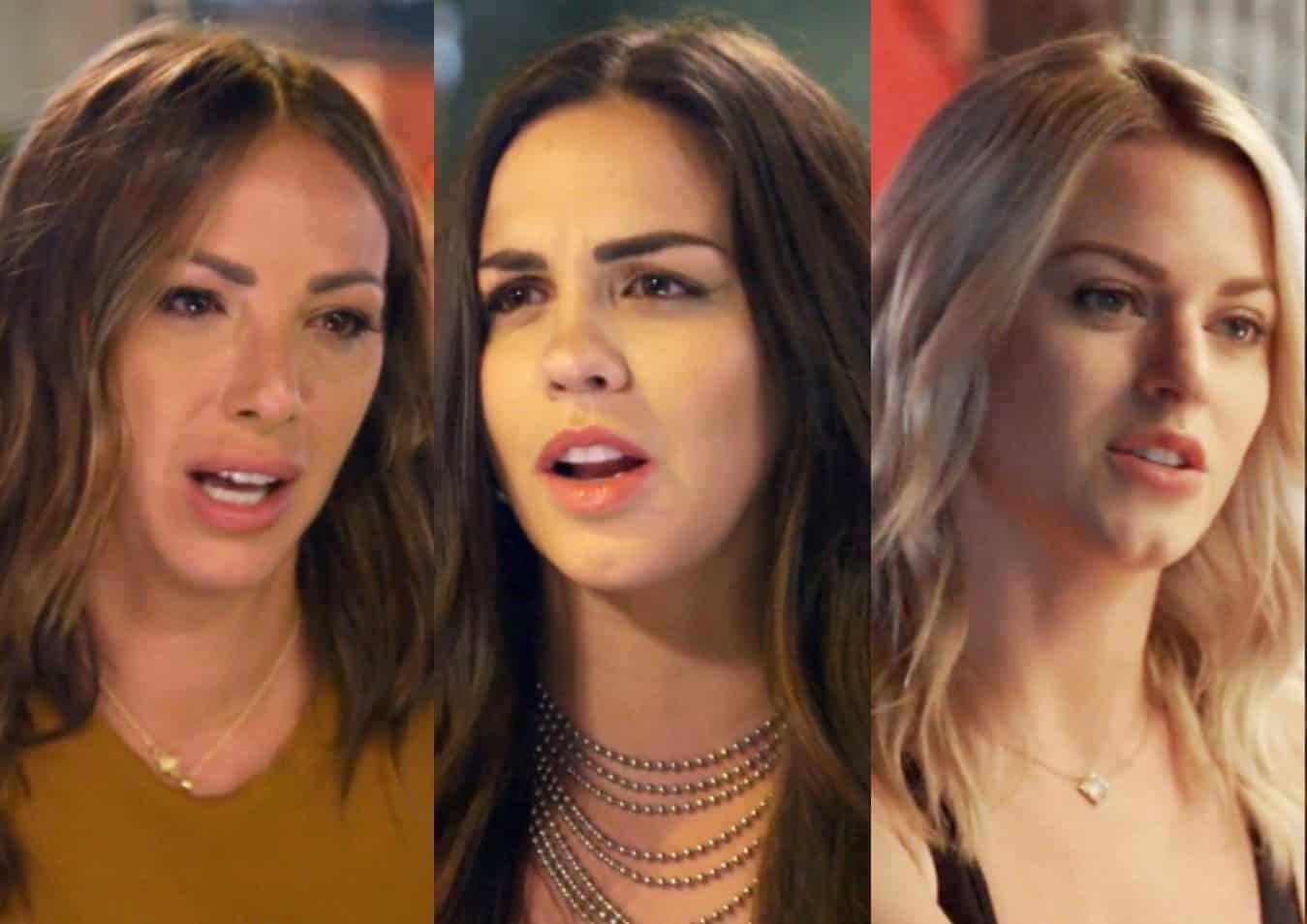 On this episode of Vanderpump Rules, could a new relationship be brewing?

Venice Skate Park. The place where 40-year-olds and Max gather to practice skateboarding tricks and wield hockey sticks. Jax asks Schwartzie how things are with Katie after having that big fight in front of the entire gang. Jax attempts to say “smart” things like “inevitable” when describing the girls, but of course, he messes up his words like a typical 40-year-old would.

In the meantime, Danica has organized a hatchet-throwing party with a select few. It’s like the D team, plus Ariana. It turns out, Raquel is a “bad ax b*tch” (her words, not mine) and that Dayna and Brett have some serious flirtation going on. Brett asks Dayna to hang out, which sounds to me like a date…except he offers up lunch, which is the opposite of romantic. Dayna is leery of Scheana finding out about this, but Brett poo-poos her.

Over at SUR, LVP makes her debut and she discusses her mother’s funeral with Guillermo, her business partner. On a different note, Guillermo begins sh*t talking Danica. It seems as if Danica has screwed up two tables and LVP is ticked off. Danica makes excuses when LVP calls her over to discuss the issue at hand and LVP throws it right back at her. She wants to know what’s with Danica’s attitude and I am gonna have to agree with her.

If I were Katie, I wouldn’t care less about Schwartzie’s skate park injury. He limps in and explains that he simply overreacted to Katie’s “social justice warrior” ways at the party. Schwartzie doesn’t like that Katie made the whole fake cop incident about HER, but Katie just wants an apology for Schwartzie’s mean words. After going on and on, he says he is sorry for his anger and cannot understand why he got so mad.

In other news, Katie and Stassi head out for lunch with…Kristen. Things are awkward, considering they have a Witches of WeHo party to plan and they don’t even get along these days. To add to the awk-city meter, LVP strolls in, mentions Vegas, and hints (in front of Kristen, who has NO clue what’s going on) about Katie and Schwartzie’s Vegas nuptials, round two. Whoops.

Brett and Dayna grab some drinks and it appears as though Brett is sweating Dayna hard. Dayna calls Brett out for liking YouTubers, but then things get deep as Dayna shares about losing her mom. Dayna and her mother have the same birthday, which is why she is hoping for a good celebration this year.

During the business lunch, Stassi gets summoned by LVP and they chat about Beau’s lack of proposal. Stassi also lets LVP know that she stuck her foot in her mouth. Kristen didn’t know about Katie and Schwartzie’s second wedding…but now she does! Thanks, Lisa!

So, Beau IS planning an engagement… and has been planning it for six months. Who knew?! Katie and Schwartz have been enlisted to help out with this proposal. Beau chats about what his plan is going to be and let’s just say he really knows his weirdo bride-to-be. Within two weeks, Beau is going to pop the question…in a graveyard, because yeah. She would love it.

Kristen calls her new BFF, Scheana. She talks about the weird Vegas thing that LVP slipped about. Scheana has no problem letting Kristen know what is going on: it’s a second wedding for the Schwartzies…but this time, sh*t is gonna be official. Kristen is confused and hurt and cannot believe she wasn’t invited, nor did she even know about it til now!

Wife Brittany is back working at SUR. All I know is that the wedding must’ve been pretty pricey. I mean, Brittany’s waiting tables and Jax is bartending. Yikes. In the meantime, Dayna finds Scheana and Dayna talks to her about the new connection with Brett. Scheana calls Brett her friend (classic) and Dayna feels better knowing that there will be no beef between her and Scheana if she sees Brett.

It’s a pool party at Ariana’s. LaLa and Dayna come hang and they talk about Dayna’a newest love interest, Brett. Dayna explains that things got weird with Scheana regarding Brett, but she thinks she may actually kinda sorta like Brett. Talk about a love triangle… I mean, she was JUST smooching Max, Brett’s friend. Max isn’t taking this news very well. In fact, Max is still unsure if he is invited to Dayna’s upcoming birthday party. #Drama.

Stassi and Beau go out for a date night, but things take a turn when Stassi begins picking at Beau and his lack of proposal. It’s so hard because Beau knows he is proposing in the very near future, but Stassi is acting like a total troll. I have to admit, I understand where she is coming from completely, as I did that, too. I mean, who HASN’T honestly done that to their fiancé-to-be? It’s all part of the process. Poor Beau.

It’s Dayna’s birthday party and it appears as though she forgot her pants. The usual suspects are there and James is staying sober…surprisingly. OMG. Who is Charli and what is her deal? She gets zero screen time, and when she does, she reminds the viewers why she gets zero screen time. For instance, she talks about her boob job and how she “named them Tia and Tamara.” Whaaaaaaat.

You know you’ve made it when LVP goes to your birthday party. I guess Dayna will be sticking around for some seasons, huh? Outside of the party, Kristen pulls Katie aside and tearfully discusses the Vegas wedding. Katie keeps it cool and lets Kristen know that they need a break from each other. Katie does not even let a small frown escape her lips. Cold as ice.

It turns out that Scheana is truly upset about the Dayna/Brett date.  Shocking. Scheana, in her rollerskating ensemble (wtf), gets called out by Dayna and things get weird. Scheana is pretending like she is just sticking up for Max, who is (she assumes is) upset by the new couple. Dayna is calling bullsh*t on this because she knows that Scheana is straight-up devastated that Brett is *still* not interested in her.

I love it when LaLa reminds Scheana that she has a whole lotta male “best friends.” Scheana does not react well to LaLa’s criticism and she cries about being overwhelmed but optimistic about being a 34-year-old divorcee.  Ooph.

I can’t believe that LVP is still at this party. I love it when she inserts herself into the Brett drama. Typical Lisa. Also typical is Stassi’s behavior.  Stassi is gonna feel like a total a-hole when Beau actually does propose, huh?

Dayna blows out the candles and celebrates her first LA birthday. She gets her face smashed in the cake by Sandoval and then everyone gets caked. Somehow, Brett winds up making out with Dayna and that, in turn, causes Scheana to freak the f*ck out. Now that’s what I call a birthday party…