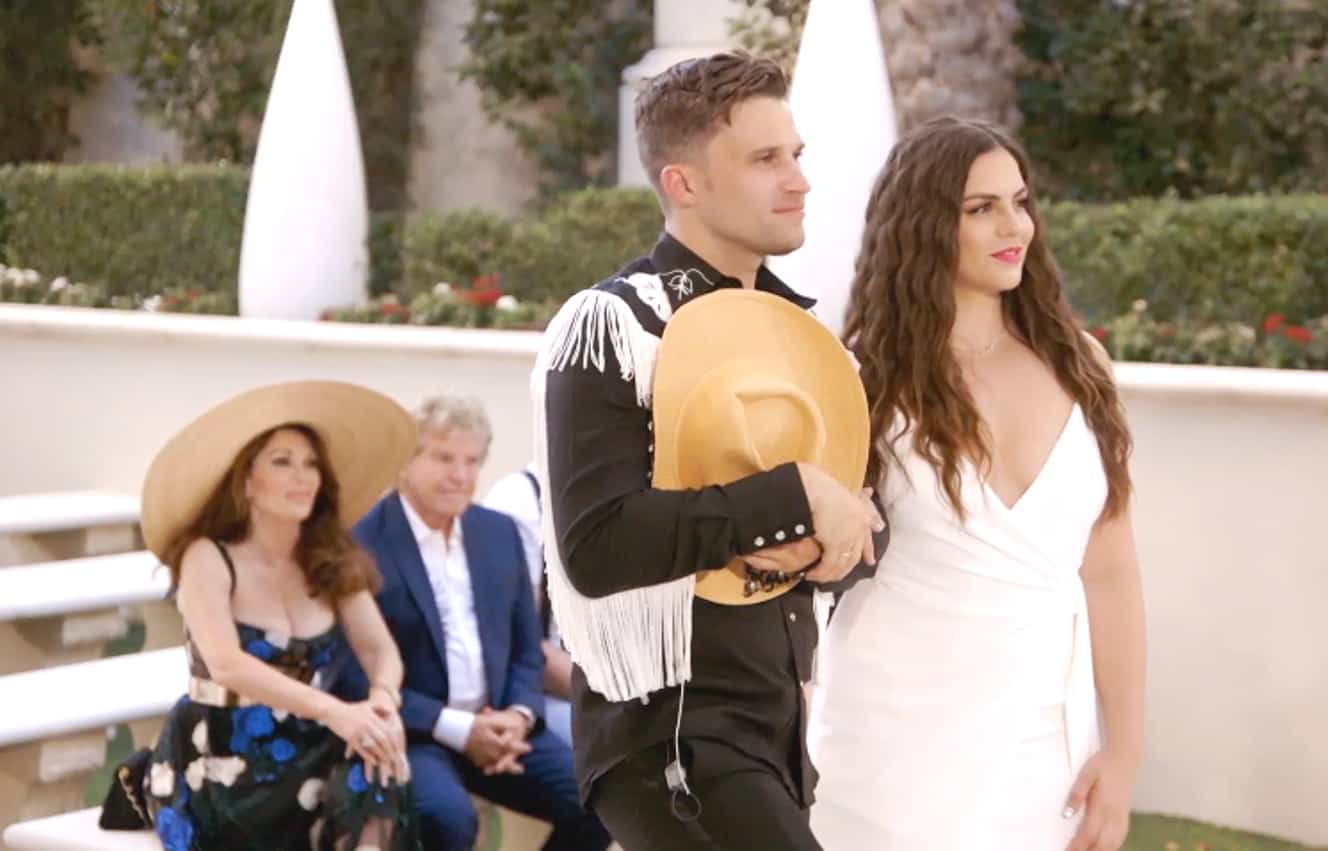 Because having one wedding featured this season wasn’t quite enough, Katie and Schwartzie have to go and do it again on this episode on Vanderpump Rules.

So it appears as though the Schwartz’s big ole’ wedding in 2016 was a sham. In case you forgot, those two boneheads never got the marriage license, so therefore, they technically aren’t even married! To fix that, they have decided to get married…again…in Vegas. To really solidify the whole marriage, they have asked Stassi and Sandoval to officiate. NOW it’s legit. Sigh.

Scheana brings Danica and Charli out for some rooftop dranks. The ladies talk about Dayna‘s birthday party and how Scheana has been “hormonal, emotional, and sick.” Scheana tries to be brave in front of everyone about her egg retrieval process, but she isn’t quite as brave when it comes to the subject of Dayna and Brett. She acts cool about their recent hookup, but inside, she is def slowly dying.

Apparently, Max and Brett are buddies right now, and it seems as though Brett is dabbling in Max’s sloppy seconds — aka Dayna. Brett explains that he had “three fruity drinks really fast” and lets Max know he smooched Dayna. Max took a tip from Scheana and tried to act like he didn’t care, buuuuut…

Whilst shopping at Barneys (the LIFE), LVP fills her hubby, Ken, in on the upcoming Vegas trip.  Because LVP officiated the Schwartz wedding: round 1, she feels like it is her responsibility to help out these knuckleheads as they right the wrong they committed. Also, this serves as a business trip for LVP’s Vanderpump Suite, so it’s a win-win for her. How come Schwartzie and Katie messed up by not filing the proper paperwork, yet are able to roll up to their Vegas nuptials in LVP’s private plane?! It’s unreal watching those two on a bougie flight and arriving at an all-expense paid Vegas wedding. WTF. I guess they are smarter than they look. Like, they had LVP officiate the first one, but maybe they did the whole “we never got the marriage license” schtick on purpose just to squeeze some more out of LVP??

Although not working a shift at SUR, Scheana pops in and pays a visit to Dayna. Scheana apologizes to Dayna for going behind her back about the whole Max/Brett thing. She also comes clean about her initial crush on Brett. How messy.

In Vegas, Stassi and Sandoval prep the vows, Ariana gets pressure to be a wife (kinda), and Brittany wants to have another wedding to Jax. And over in Katie and Schwartzie’s hotel room, a mystery bra is found in Schwartzie’s luggage, thus leading to some infidelity questions. Will these two ever stop and grow up?

How cute is Beau? He phones Stassi’s dad and is a nervous wreck. Beau stutters and asks for Stassi’s hand in marriage and breathes a huge sigh of relief when her dad gives him the go-ahead. They laugh about Stassi making a good wife and Beau has the green light to pop the question. Holler!

Even though LVP is away, the show must go on at SUR. Raquel shares with Charli that James is doing so great with his path to sobriety…so much so that she tells Charli she is more turned on by him. Gross. Thanks for that TMI.

Over at Scheana’s apartment, Kristen comes over and checks in on Scheana after her egg retrieval. The discussion then turns to Katie and Schwartzie’s second wedding and Kristen still can’t understand how her “ride or dies” have blatantly decided to cut Kristen out of their lives.  Same story, different episode.

OMG — LVP, that naughty girl! That bra that was in Schwartzie’s bag belongs to her?!  She has quite a sense of humor and when she fills Katie in on her stunt, the two cackle thinking about just how much they are making Schwartzie sweat. It’s so funny to see LVP get involved in the Max/Dayna/Brett triangle. It’s also so funny to watch LVP get talked into ziplining after downing two Jiggy Tonics. LOL. The next day, Katie is still going on about the planted LVP bra, but she finally comes clean about LVP’s trick. Schwartzie is in awe of said bra and wants to keep it…kinda weird, kinda funny?

Why in the world is Danica wearing chains?! Did she fail her breathalyzer again? Too soon? Because these two have nothing else to talk about, Danica and Dayna talk about Max and Brett. Danica doesn’t believe that Brett is a good fit for Dayna, but then again, I wouldn’t take advice from someone who has two restraining orders against her.

On the day of the wedding, everyone is donning their Vegas best. Stassi is wearing a fake nun costume, Sandoval is dressed as the King himself, and Max (the try-hard) is the flower girl. Why is Schwartzie so nervous? He has done this before. Also, why are none of their family there?! Stassi is actually killing the officiating duties — throwing jabs at Beau about proposing, teasing the Schwartzies. They become official hubby and wife and the paperwork is written up.  Finally.

Ah, it’s a double date back in LA. Brett and Dayna have this forced dinner with Raquel and James very clearly for filmed segment purposes. Brett goes on and on about how hot he thinks LVP is and I wish I could unhear Dayna saying LVP has a “fat p*ssy.” Apparently, that means you have a hot body…but I never want to be told that by anyone, thank you very much.

The wedding after-party is held at LVP’s new Vegas restaurant. It’s pretty much the same as SUR, right down to a Scheana doppelganger waitress. Jax makes a speech that is about ten seconds long, yet he needs to read off of his cell phone notes?? They toast and celebrate and Beau makes his way over to LVP to tell her his big news. Beau shares his proposal plans with LVP and she is over the moon happy. It is very cute of her to be so warm and it’s also very cute how she volunteers to host an engagement party. Beau’s fake surprise face at this news is hilar. What did he EXPECT to happen?  I mean, Katie and Schwartzie mess up royally, yet she swoops in and picks up the tab for the entire ordeal!

The next morning, the Vegas vacation is coming to an end. Everyone packs it up and LVP makes a quick call over to Max to be sure he paid the invoices. She FaceTimes him upon hearing that his room is a disaster and comes to find out that Max brought home the Scheana doppelganger waitress. Nasty.

Are you kidding me? Schwartzie lost the marriage license? AGAIN? He manages to hold onto to LVP’s bra, but cannot keep the MOST IMPORTANT THING and REASON THEY ARE IN VEGAS?! I gotta tell ya, his scatter-brained ways are not so endearing… He better pray LVP doesn’t find out about this cuz something tells me she isn’t gonna cover a round 3 of this wedding business…