Vanderpump Rules Recap: Stassi Storms Out on Beau After Asking Him to Choose Between Her or Kristen 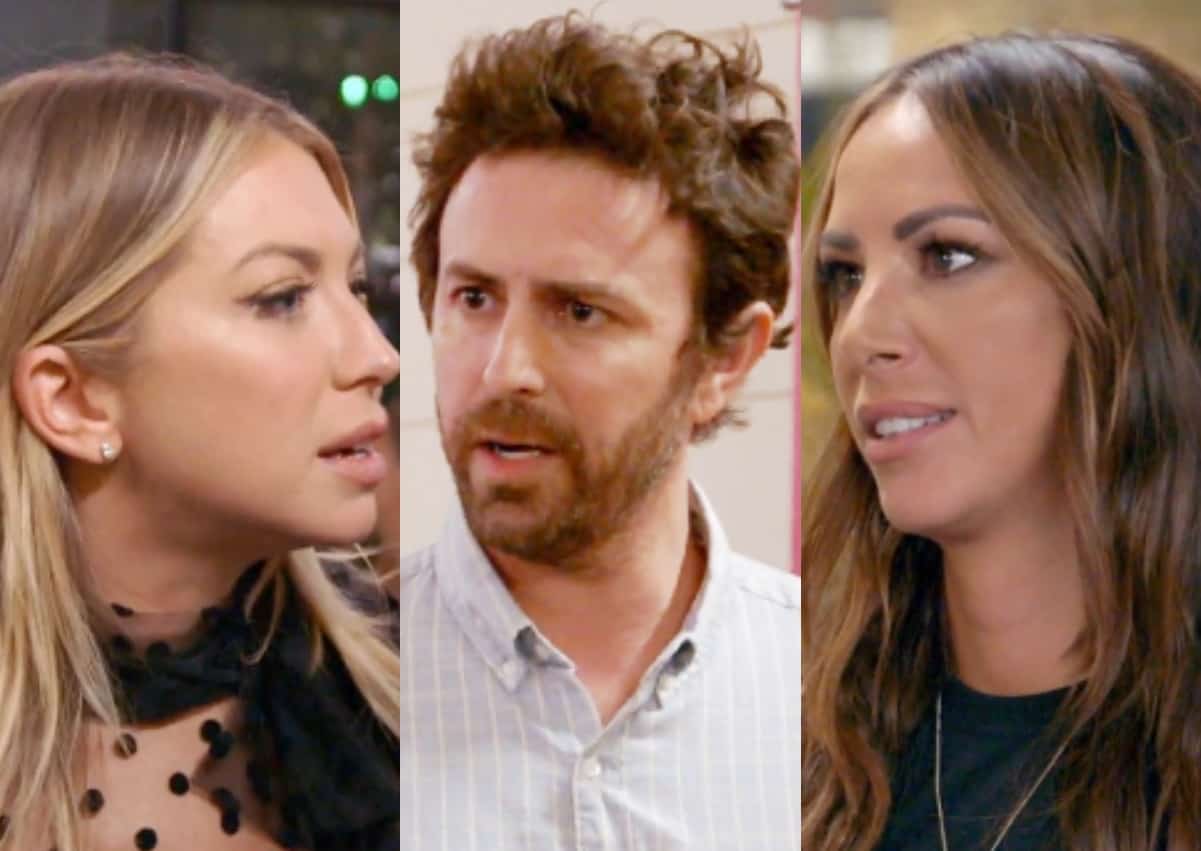 On this episode of Vanderpump Rules. the witches of WeHo fall apart and it seems like this time, it’s for good.

Brett and Dayna are at bartending school? Perfect. Dayna is beyond thirsty, so this seems like a fitting role for her. Also, why does Dayna even care about who Max hooked up with while in Vegas? What an odd love triangle.

Over at Stassi‘s apartment, Katie and Schwartzie pop over to discuss the newest snafu: Schwartzie lost the marriage paperwork…again. It’s getting borderline pathetic. Later in the conversation, Stassi admits that she is not NOT trying to make a baby with Beau. She does know that she can’t drink for nine months if she becomes pregnant, right?

Katie brings up the Kristen drama and that triggers Stassi. Beau explains that Kristen is STILL his friend — she actually introduced Beau to Stassi. Interesting…the guy’s in a bit of a pickle. Particularly because they are all going to be together tomorrow night for the Witches of WeHo wine party. Good thing the girls got into business together, huh?

Another day, another shift at SUR. LVP comes in for a snack and a chat with Scheana. Scheana shares about her egg retrieval surgery and LVP calls bullsh*t with Scheana when Scheana says she doesn’t want to be in a relationship right now. This is why LVP will always be the MVP. LVP wants to hear about the newest men in Scheana’s life and is especially into hearing about Max and Brett.

The next day, Scheana stops over Dayna’s apartment. I didn’t realize these two are friends now? They chat about Scheana’s scooter injury and how Scheana has to rest from twerking after her surgery. Wait — how old is Scheana again??

Scheana has decided to surprise Dayna for her birthday because she is very clearly kissing her a*s.  Scheana has hired a psychic as a birthday present (weird gift) for Dayna in the hopes of having Dayna’s late mom come through. Dayna does not take the news well, particularly because Scheana did not ask Dayna first. Scheana states that the psychic is simply “available” for Dayna — not waiting outside or anything.  Dayna chooses not to accept the surprise and becomes annoyed upon seeing the psychic already outside of her house. Scheana is the world’s worst liar.

Over at Villa Rosa, LVP attempts to help Beau with the engagement party that she will be hosting once he pops the question to Stassi. Beau is thrilled to be throwing surprise after surprise at Stassi. When the guest list gets discussed, Kristen comes up. It’s actually LVP’s idea to have Kristen invited to the party, as the girls were basically sisters up until a little while ago. Beau is stuck with the tough choice to add Kristen’s name to the guest list: will it p*ss Stassi off or will it work out in the long run??

Wow, so it’s club night for some of the gang. I wonder how James is holding up in this scene. James explains to Brett that it’s definitely a different experience being sober in da club. Brett admits to James that he is into Dayna, but first, he needs to handle Danica. He asks to talk to Danica outside. Totally an ideal circumstance to address any beef between two people, amiright?  Danica explains that she doesn’t think Brett is the right person for Dayna, and when Dayna joins in on the convo, the subject turns to Scheana. It’s baffling how this always happens. Scheana always getting dragged into the drama, even when she isn’t there!

LaLa rolls up to the recording studio with a surprise guest…James. The duo is back spitting beats together. I can’t even tell that is LaLa’s voice after all of the voice autotuning. According to James, LaLa’s song is “so Kanye.” LOL. They get a break during the recording process and LaLa takes that time to touch base with James about his sobriety. They commiserate over dreams about drinking and LaLa explains that she wants to move on to a better place with James. She tells James that she wants to see him do well. Cute.

Tonight at SUR, Brett is getting a chance to show his bartending skills. Yet, he somehow gets a chance to meet Scheana in the back of the restaurant to chat. Must be prettttttttty busy there, Brett. Scheana is annoyed that Brett has been ignoring her and she is over their one-sided friendship.

Shocking! Dayna is able to sneak out of her shift to also come talk to Scheana. How do these people find the time during WORK?! Ah, yes. That’s probably cuz they aren’t really working. Scheana can’t believe that Dayna is still so upset over the psychic. The girls decide to squash the issue and focus instead on building their friendship.

It’s the night of the Witches of WeHo wine party and Kristen is kind of entering this evening blindly, as she has not seen or spoken to Katie and Stassi in quite some time. Kristen has been working her a*s off to set up this party, whereas Katie has just been doing nothing (as usual) and Stassi has been prancing around without pants on (see her outfit at this event).

When the US Weekly reporter sits down with the witches to discuss their wine, it is simply painful to listen. The girls sugarcoat everything during the interview and you can tell that it’s over between them. OMG, look at Sandoval peeping the wine in his glass like he’s a connoisseur. I can not. He has come up with a plan with Danica to hold a softball game that will decide which restaurant is better, SUR or TomTom. I am really looking forward to scoping out the athletic ability of this cast. In the meantime, Max beelines to Dayna and wants to talk about her new “relationship” with Brett. Dayna lets Max know that they should just move on, as this is “lame.” AMEN.

As the night wears on, it is evident that Stassi has NO idea that Beau is proposing tomorrow. He tries to feel out if it would be ok to have Kristen at the engagement party he planned, but Stassi bites his head off. She can’t believe that Beau doesn’t understand that she is over Kristen, but what she doesn’t understand is that Beau has something big planned…and Kristen is a part of it.

Amidst the party, Beau finds Kristen and she straight-up asks Beau if they are still friends. Kristen inquires to Beau, “Are you not allowed to have friends that she’s [Stassi] not friends with? Cuz you’re afraid of her.” Ouch. Beau looks like an abused puppy as he tries to explain to Kristen, a crazy lady. But he gets nowhere because Stassi, another crazy lady, jumps into the conversation.

Kristen excuses herself at this point and Beau reminds Stassi that if he wasn’t friends with Kristen, their relationship would have never come to fruition.  Stassi is losing her mind and I am proud of Beau for saying to Stassi, “You don’t get to choose who my friends are.”

Stassi threatens Beau and even gives him an ultimatum telling him he can either go home with her or leave with Kristen as her voice gets louder by the minute. She feels “so embarrassed and so weird” and is throwing a TANTRUM. Little does she know that Beau is proposing tomorrow. I mean, after all of this, MAYBE he is proposing tomorrow.  In dramatic fashion, Stassi begs Beau to answer one question: “I am your f*cking person, am I not?” When Beau falters for half a second, Stassi becomes enraged.  And with that…Stassi storms out.  Should make for a fun proposal tomorrow, huh?