Vanderpump Rules Recap: Stassi and Beau Get Engaged… at a Cemetery! 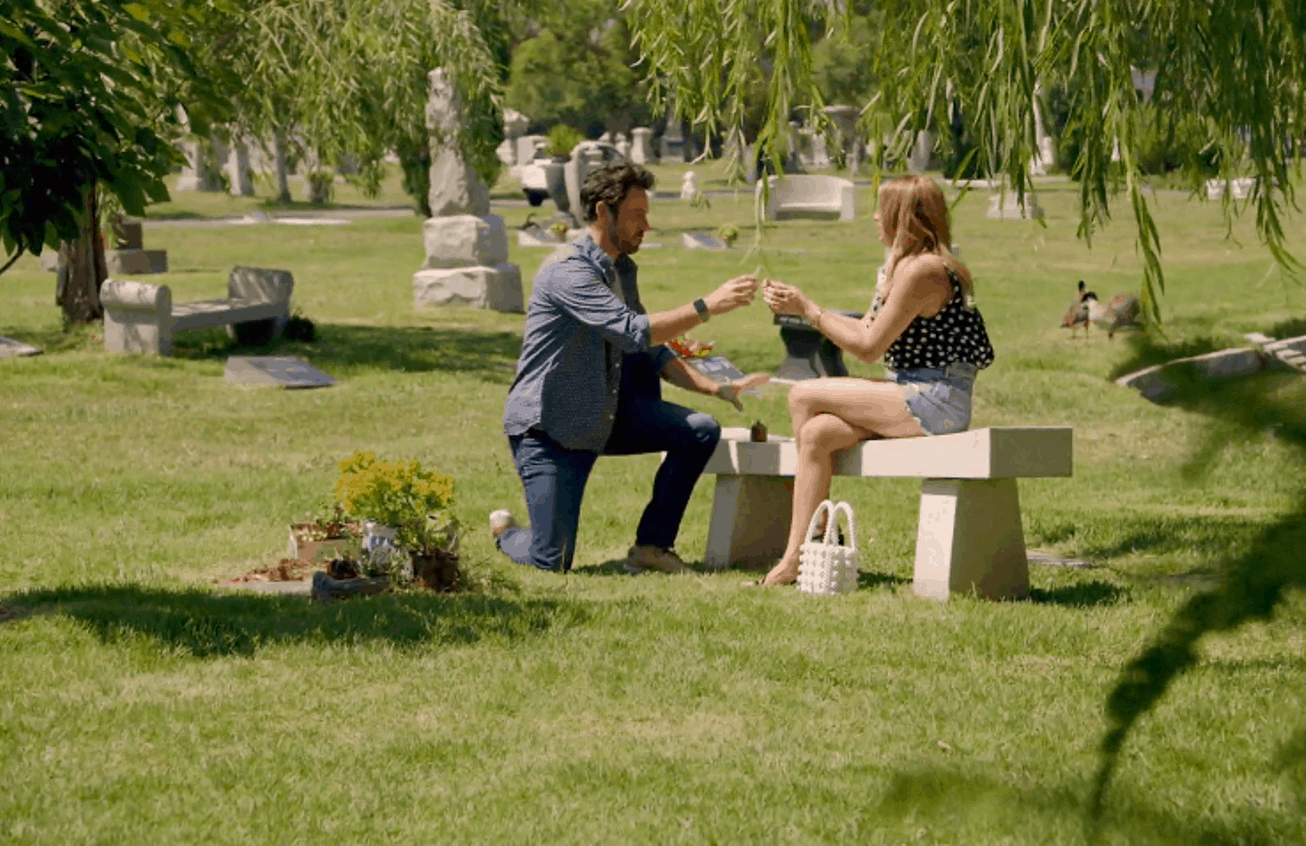 There’s about to be a new wedding to plan for on this episode of Vanderpump Rules.

“I’m so sorry. I’m an as*hole.” Can we rewind Stassi apologizing to Beau about her behavior the night before because I don’t think we have seen that often? After whipping up a big bowl of mac and cheese as an “I’m sorry” meal, Stassi is relieved to hear they will still be going mausoleum shopping. Little does Stassi know, she is about to become a fiancé! Beau’s proposal plan is underway…

Over at SUR, Danica is prepping for the TomTom vs. SUR softball game by purchasing team socks from local sex stores. I cannot make this up. The SURvers aren’t the only ones getting amped for the game: Ariana, Schwartzie, Sandoval, and James are #teamTomTom. Something tells me that James isn’t very athletic, but I am willing to bet that Sandoval hasn’t put his hand in a baseball glove. Ever.

So it turns out that Stassi is more calculated than I thought she was. Stassi’s thought process is if she and Beau buy a mausoleum together, then he HAS to propose to her. BUT. She doesn’t really need to be contriving some awkward AF plan. I love that she has no idea what is about to happen! Beau is very clearly sweating and in full-on panic mode. I can actually hear his heart beating as he crouches down on one knee.

Beau very sweetly professes his love to Stassi… at the cemetery…and I am borderline tearing up. I mean, who would have thought anyone could be that into Stassi?! Is anybody else weirded out that it took Stassi a VERY long time to get up and smooch Beau after he asks her to marry him? She was totally delayed in laying one on this guy who legit spilled his heart out to her.

The surprises keep coming, as Beau lets Stassi know that there is a post-proposal party planned at LVP’s. Stassi is thrilled and naturally can’t stop staring at the ring, so much so that Beau has to remind her to call her friends to spread the good news.

Villa Rosa is in full-blown celebration mode. LVP is being the hostess with the mostest. A huge LOL to Ken just throwing a quick ‘sup to LaLa and Katie as they parade into the castle. A bigger LOL when Ken comes back in to investigate LaLa’s outfit…if we can even call it that. LaLa, where are your pants?

LVP feels a bit “sympathetic” towards Kristen, as she was not invited to the post-proposal party. Kristen is super hurt that she had to find out about the engagement through social media. When LaLa calls Kristen, she lets her know that up until the night before, Kristen WAS invited.  But, alas, Kristen’s behavior at the Witches of WeHo event put her on the cut list. Kristen lashes out. Rightly so. I am unclear what the actual purpose of LaLa’s phone call was, but I am calling bullsh*t that it was to “see how Kristen is doing,” LaLa…

What came first? Stassi posting on social media or Stassi calling her dad to share the news? She is a strange bird, huh? Speaking of strange birds, let’s discuss the text Beau received from Carter. I mean, Carter’s not wrong. Kristen DID hook Beau and Stassi up…but I think the timing was off. Not today, dude. Stand up for Kristen maaaaaybe tomorrow.

The post-proposal party is jumping off and LVP is choreographing one final surprise: Stassi’s entire family being present. Stassi loses it when she sees her family and Beau swears there are no more lies or surprises, which is appreciated as Stassi’s surprised face is borderline terrifying.

Everyone is amped for the couple. The girls talk ring and the guys, well, they toast and give high fives. Hearing Jax say “welcome to the club” caused some sort of gag reflex deep within me. When Brittany asks how Lisa got involved to host the proposal party, you can tell that she is totally green with envy. Guess the apartment party Jax threw her wasn’t quite enough for Miss Brittany. And no, Brittany, you cannot get married again!

Leave it to Ariana to remind the world that there is an empty chair next to her and that chair belongs to Kristen. Even though Kristen isn’t there, somehow Carter and Kristen become part of the conversation. #drama.

There are actually some sad suckers stuck working at SUR whilst this celebration occurs…if you can call it working. How do any of these people have jobs? Do they ever actually wait on these customers or do they simply sit in the back of the restaurant discussing the Max/Brett situation? Even though Dayna tells Brett she is into him, she can’t shut the hell up about Max TO BRETT. It’s time she zipped it already.

The next morning, Stassi has essentially planned their entire wedding…in Italy. Beau is super confused and was hopeful that the newly engaged couple could just enjoy the moment for a bit, but Stassi has other plans for *her* wedding. She refers to herself as “a bride demon” and I only have one thing to say: RUN, Beau.

So Jax is a grass expert? Man, who knew? While he is busy cutting Kristen’s grass (which by the way totally sounds like something sexual), Brittany visits with Kristen. Kristen explains how upset she was over being purposely left off the guestlist for the proposal party. Brittany lends an ear, but when Jax shares the message Carter sent to Beau, Kristen swoons a bit. You can see her crazy-lady wheels turning until she then remembers that this is totally gonna become her fault.

It’s the day of the SUR/TomTom softball game. Sandoval is swearing that TomTom is gonna take the W. The team looks great in their all-black uniforms because, as Sandoval puts it, black hides dirt and is slimming. OMG. Too bad Team SUR is also wearing black. Whatta joke.

LVP arrives to throw out the first pitch and then the game begins. Not much athletic ability thriving on that field. You know it’s bad when Scheana is the only one who shows some promise. It turns out that Scheana’s great aunt is one of the original members of the Rockford Peaches (no way!), and perhaps that proves why she is slightly athletic.

How bout Ariana’s commentary as the announcer for Brett and Max? Gotta give it to her. At least she is getting involved, unlike Katie, who simply keeps the bench warm. While on the bench, James makes his way over to her. James apologizes to Katie (for like the 13th time), but he swears this is the last time. This is one of his major steps on his road to sobriety and Katie accepts.

The flirtation between LVP and Brett is beginning to make me borderline uncomfortable. Also, uncomfortable is Raquel’s leap-frolic to first base. Where do these people come from? In the end, SUR wins, which means TomTom will be cleaning SUR’s bathrooms. And going to the dentist? Holy crap, Ariana — the girl almost knocked her teeth out! At least then she can snag a few toothbrushes to get that bathroom cleaning started…