Vanderpump Rules Recap: Jax Admits to Losing His Mind and Max Freaks Out Over Dayna

by Julia May 13, 2020 58 comments
ShareTweetWhatsappPinterestRedditTumblrMailFlipboard 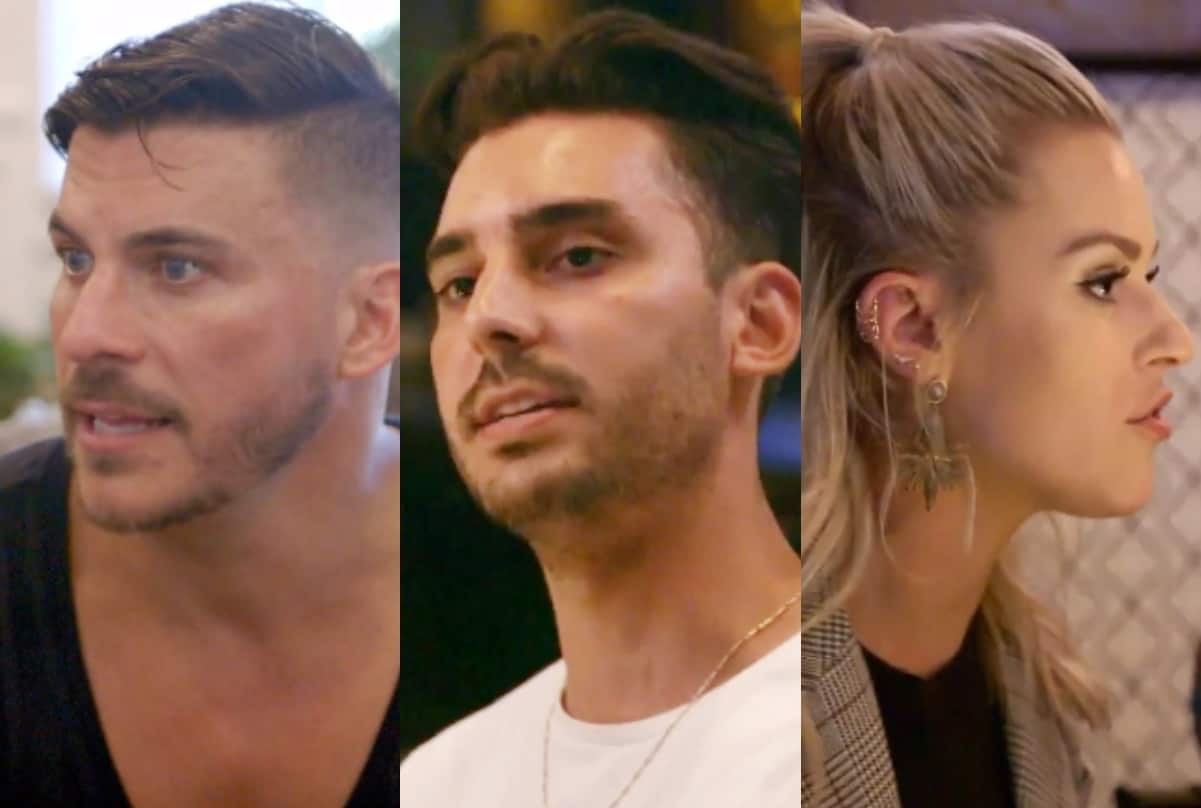 Competing pool parties cause a big divide among the group on this episode of Vanderpump Rules.

A bet is a bet and since SUR won the softball game, Tom and Tom, in their matching dress clothes, are on their hands and knees cleaning SUR’s bathrooms. Evidently, the twin-dressing is part of the experience at TomTom. Even LVP scoffs at their ridiculousness. Speaking of ridiculousness, DJ James Kennedy is back behind the booth spinning at SUR. That guy gets more chances…

On their way out of SUR, Sandoval and Schwartzie bump into Brittany. Sandoval has decided to let Brittany and her electrocuted hair know that he, too, is having a pool party…on the same night Jax planned his. That’s what you get when you rage text, Jax. People could care less about your party…so much so that they, in turn, have their OWN.

Dayna and Brett are on another date. This time they are visiting Charli at her other job at a different restaurant in LA, which helps support her acting and modeling career. Eye roll. Brett still has that stupid hair and Dayna still ogles Brett. She refers to him as “a sexy Paul Bunyon.” Dayna better pump the brakes since Brett is now having second thoughts about seeing Dayna. After talking to Max, Brett is worried about breaking guy code, but that doesn’t stop him from sucking face with Dayna at the end of the night. Can’t. Keep. Up.

After Brittany’s shift at SUR, she storms into her house screaming about Sandoval’s pool party. Jax is livid and Brittany is confused about why Sandoval would want to do something like that. Jax refers to Sandoval as a “woman” and Brittany is so frustrated that she proceeds to throw back a shot in an attempt to make herself feel better. When Brittany tries to let Jax know that perhaps his rage text is the thing that set Sandoval off, Jax loses it. He storms out…to the gym…for the third time that day. This, of course, reminds Brittany of Jax’s cheating days and she becomes upset all over again. Healthy relationship, huh?  Get that girl another shot.

The next day, LVP pays a visit to TomTom. She chats with the fellas and then Ken lets them know that TomTom actually made a profit in its first year of business. Because of this, LVP and Ken offer the guys a 10% stake in a venture right next door to TomTom. It’s hilarious that Sandoval and Schwartzie call it a “partnership” with Ken and LVP…but alas, no one wants to burst their delusional bubble.

LaLa goes over to Brittany’s house. Brittany shares her fears about Jax’s recent behavior. LaLa listens and decides to help Jax and Brittany bring their party up to the next level. LaLa asks James to DJ the Brittany/Jax party, but unfortunately, James is already booked…for Sandoval’s party. Ouch.

Another Dayna comedy show. Another reason to get Max and Brett in the same room to make things super awkward. I love it when Stassi says, “It’s so sweet that you guys came to support your girlfriend.” LOL.

In the meantime, Ariana is “busy” at SUR, but she takes a break to talk with LVP about an upcoming covenant house collection. Because that conversation is boring, Ariana changes the subject to the dueling pool parties. LVP is concerned that Ariana and Brittany will not behave when they see each other at her event, and when Ariana doesn’t agree or disagree, I am kind of worried.

Scheana joins the crew after Dayna’s show and everyone gets to talking about the competing pool parties. LaLa calls Ariana and Sandoval’s house a frat house with no furniture, but it is pretty unanimous that they are ALL over Jax’s sh*tty behavior.

When there’s a lull in the conversation, LaLa blurts out the newest tea: Dayna and Brett made out. This causes WWIII between Dayna and Max. Max freaks the f*ck out, Dayna yells about expressing emotion, and Brett shouts, “I don’t have feelings for the girl.” Ooph. Thank God Beau steps in. He tries to shut down the whole deal, but the damage is already done. In the words of LaLa, they are “messy.”

It’s the day of LVP’s covenant house collection with Ariana and Brittany. LVP wastes no time trying to figure out what’s going on in the Taylor house. When Brittany starts to open up, she shares that she is hurt by Ariana. Dramaaaaatic. Ariana states in her confessional that Brittany is basically “collateral damage” in Jax’s rage issues. No one means to upset Brittany, but Jax is such a d-bag that it just trickles down to her. Ariana dances around the fact that Brittany is married to the problem, but Brittany defends her hubby. Ariana lets Brittany know that this competing party wasn’t even Sandoval’s idea…and she throws Katie right under the bus. #deflect.

Over some food and drinks, their favorite hobby and interest, Katie and Schwartzie have a nice chat about LVP’s TomTom expansion. Things take a turn when Katie gets a text from Brittany. Brittany angrily blames Katie for the pool party competition, Katie calls her and freaks out, and now we are in a real pickle. Katie reiterates that “This is still 150% Jax’s fault.” Hold on. Really quick. Someone please remind me how old these people are?! Why are they fighting and planning dueling parties? Too old for this…

Ew. Why are Ariana and Sandoval wearing matching kimonos? When Katie and Schwartzie roll up to Sandoval’s pool party, Katie fills Sandoval in on the most recent happenings with Brittany. He is in awe that Katie got blamed, but you can tell he is pumped to get some of the heat off of him.

Meanwhile, over at party number two, you could hear crickets chirping. The youngins refer to Jax’s party as a retirement party. I mean, it’s way more fun to twerk beside a pool and sh*t talk in a tent at Ariana and Tom’s, right?

NEWSFLASH. Carter and Kristen are dating again… We learn this because Kristen tells Ariana the info. The ladies + Carter sit around smoking hookah (???) and talking about what a biatch Stassi is for making fun of Ariana’s house and its lack of furniture. Just a bunch of miserable peeps…

After what I can only presume is 57 shots and cocktails, Sandoval and Schwartzie discuss the LVP and Ken offer. They get interrupted by James and Sandoval invites him to DJ their one year TomTom celebration. Wait. Why is Schwartzie dressed like it’s the winter? Also, what the heck was Katie drinking this whole time? She slurs about how far James has come and they even hug it out. It feels like the twilight zone.

Back at Jax’s…When Stassi sees Jax by himself for a sec, she gets his ear and lets him know that it looks like Jax is losing his mind. He refers to his brain as a sprain and attempts to talk about his brain like a doctor. Stassi calls Jax out for trying to be a victim. He throws a million and one excuses at her and talks about how he is sabotaging his relationship with Brittany. How funny this is watching Stassi try to advise this whack-job. Stassi, of all people, should know that Jax cannot be tamed…especially when he turns like this.