Vanderpump Rules Finale Recap: Lisa Tells Off Jax After He Calls Pump Rules “My Show,” Plus Some Friendships End

by Julia May 20, 2020 97 comments
ShareTweetWhatsappPinterestRedditTumblrMailFlipboard 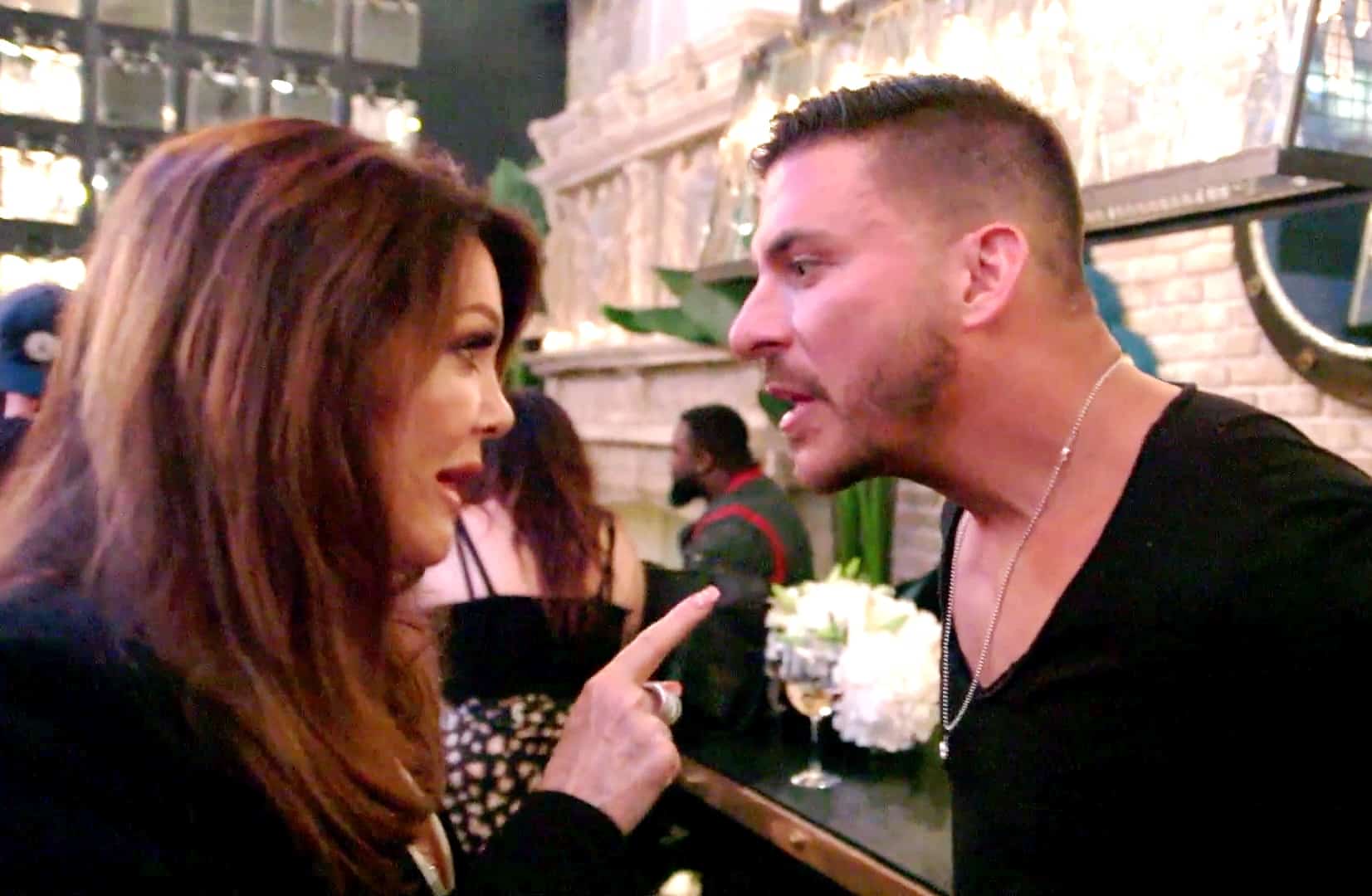 Here’s to hoping the love triangle gets squashed and the drama settles in time on the season finale of Vanderpump Rules.

So apparently, Dayna has forgotten that Brett screamed he has no feelings for her the other night. Dayna pretends like she is cool with what Brett said and acts like she knew what he meant when he said that. Riiiight. Max and Brett were literally fighting over who likes Dayna the LEAST. Dayna and Brett discuss Scheana and how she behaved during that super awkward dinner. Scheana had no problem inserting herself into the situation, and in the words of Brett, “she is literally trying to sink the ship.”

Bravo to Dayna for standing up to Scheana. She straight up lets Scheana know she doesn’t appreciate her input about Max. Scheana smirk-listens, as she loves nothing more than being involved in this ridiculous love-triangle.

Later, Ariana and Sandoval discuss how Jax needs to grow up…yet they are the ones who threw a dueling pool party because they were tired of Jax’s mean behavior…Slightly hypocritical. Ariana addresses how Stassi has been making fun of their house and lack of furniture. She is beyond displeased with “Stassi bad-credit Schroeder.”

LaLa has the ladies over to Rand’s house…I mean, her house with her fiancé. Eye roll. The view is redonkulous. And so is the conversation. The girls address the elephant in the room: the conflict between Katie and Brittany. Katie blames Jax for the double-pool-party issue, but Brittany continues to blindly defend her crazy a*s hubby.

It couldn’t be a season without James’ mom, Jaqueline, showing up. They exchange sobriety stories and talk about his mom’s double mastectomy. It’s an emotional moment when James talks about her breast cancer, especially when he shares that he usually turns to alcohol during trying times, but this time he remained sober.

I love it that Beau makes no qualms that Stassi is the breadwinner. They start their house hunting off with a meager $2 million dollar home. They both decide not to settle on the first house they see, not like Beau has much of a say really…

It’s time to talk about the TomTom extension. I hate how Sandoval and Schwartzie are getting all of these amazing opportunities and they are such tools. I mean, Sandoval rolls up late only to tell LVP and Ken they are ready to invest further with the team. Cheers!

The day of the Hollywood Reporter photoshoot, LVP comes in like royalty as all the employees gather. LVP brings in the whole crew, including the bizarro Scheana twin, Karrah, from Vegas. It’s literally anyone who has ever been of importance to the show thrown into the mix. There is no rhyme or reason to it. I mean, LaLa is there solely because she is LaLa and because I guess she works for Vanderpump Dogs?! That’s a helluva stretch.

During some downtime at the photoshoot, Ariana asks to speak with Jax alone and I can tell she means business. Jax starts lying immediately, but Ariana calls him out. Jax deflects and claims that Sandoval likes to put his nose in other people’s business. Ariana shuts down all of Jax’s attempts to dodge the blame, and she becomes particularly brutal when she reminds Jax “you don’t have an actual clue about what you’re talking about” when it comes to her home life with Sandoval.

In the meantime, this seems like the perfect opportunity for Max and Brett to set the record straight. Max explains that he feels betrayed, but Brett reminds him that he is four girls past Dayna. Touché. Brett insists that Max talks to Dayna one more time. Excellent.

Everyone gathers to take the final group shot. LaLa is holding a tiny puppy as a prop and sassy Jax gets called out for wearing a blue shirt when everyone else is wearing black. The eyes bulge. The words fly. And LVP knows right away that something is seriously wrong with this psycho…again. Jax explains that he feels out of control and that he is unhappy, despite his on-paper happy life. LVP brings him back to reality and lets him know that self-destruction is not gonna work this time.

Later that night, it’s time to celebrate. It has been one year since TomTom has been open and it’s seeming like things are only getting better. Katie finds Stassi to let her know the bombshell: Kristen and Carter are dating…again. As if on cue, Kristen waltzes right past the mean girls and states that she is not afraid of them anymore.

Boy, Ariana is on a tear tonight. She plops down next to Stassi and lets her know that she is unhappy with some recent rumors. Stassi seems to know exactly what Ariana is referring to, and before Ariana can explain, Stassi demands Scheana join them. I cannot get over the way Stassi beckoned Scheana OR the way Scheana comes running!

Scheana had told Ariana that Stassi was talking smack about Ariana’s lack of furniture. When called out as a lie by Stassi, Scheana demonstrates that she is a straight-up rumor spreader. Somehow, Ariana decides to believe Stassi and it might be because drunken bizarro Scheana has weaseled her way into the conversation in a way that only a wasted girl could do.

Danica interjects herself and lets bizarro Scheana know she should get out of the conversation and all hell breaks loose. I’m not gonna lie: Danica seems like a wacko! No wonder those dudes (plural) filed restraining orders against her!! Get a load of Peter trying to separate the ladies for like…one minute. LVP watches from afar until it begins to spiral. She steps in and asks Danica to leave…and with that, Danica finally gets 86ed from TomTom. LOL. Max’s dream came true.

Interesting that LaLa and James decide that tonight should be the night they debut their new jam. I bet Scheana wishes he was spinning “Good as Gold.” Paaaathetic. Speaking of pathetic — watching James apologize to Randall is making me cringe. You can tell he is nervous as hell. Randall doesn’t just accept the apology — he basically invites James to his future wedding. Amazing.

Side note: How many times can Raquel tell James that she is so attracted to him now that he is sober? It’s nice and all, but does that mean she was just dating him before to get on the show or something?

My goodness, can this Dayna/Max drama be finished already?! When Dayna brings Max out to the patio, she lets Max know that she knows he hasn’t been a saint since they’ve stopped talking. Dayna can’t wrap her mind around why Max is giving Brett such a hard time about the make-out. To that, Max retorts, “I’m turned off by you,” followed by, “The way you carry yourself is a little corny.” Ew. How could anyone like this d-bag? Max reminds Dayna he hired her and that she should stay in her lane, and with that, he turns to leave, ending the chat.

LVP grabs the mic and begins her some have grown up/some have not canned speech. Brittany looks wasted (even though she claims she is “buzzed”) and makes up with Sandoval. Glad one person in that relationship can move on. Ya’ll know Jax holds grudges forever. Jax and Sandoval have a weird chat whilst Kristen confronts Stassi and Katie. The friendship break-ups are about to go down…

Why does Kristen still think that Stassi and Katie care one iota about her? They are sick and tired of her behavior, especially when it comes to Carter. In the meantime, Jax moans that something is wrong with him and shares that he started crying whilst in Home Depot purchasing flowers. He further defends himself to Sandoval by saying it’s “like I’m a handicap person.” Uhhhh….

Stassi comes right out with saying Witches of WeHo is no longer going to be a thing and admits that this ending of a friendship with Kristen is a little sad. They have been tight for a really long time, but sometimes, friends just grow apart. Stassi and Katie are so done with Kristen and it’s the exact same story for Sandoval and Jax.

Sandoval states, “I’m wasting my energy and my love on the wrong person. I’m establishing my boundaries.” The fellas decide to take a break, as if they were in a relationship. Perhaps a step back would heal that friendship. But we all know that breaks are never a good thing. They are either gonna get back together and be toxic all over again OR it’s kissing goodbye years of friendship.

When LVP realizes the issues unraveling, she tries to jump in and save Jax from really losing his marbles. Jax tells her, “This is not a television show, Lisa. These are my true friends.” But Jax doesn’t know when to stop as the producers break the fourth wall after Jax calls Vanderpump Rules his show!

“This is why my show is successful,” says Jax. Oh no he didn’t!

Ouch. This is when Lisa’s had enough as this causes her to become the person we all love the most. The take-no-sh*t LVP.

Lisa fires back at Jax, “This is actually not your show. It is actually my show, okay? And I put your a** on it, so don’t be f**king disrespectful to me.”

Not surprisingly, Jax backs down right away as LVP demands he pull it together, and the season ends on a rather uncomfortable note. Should make for an interesting reunion…