RHOBH Recap: Erika Calls Out Kyle for Crossing the Line as Kyle Defends Her Friendship With Teddi

by Julia May 21, 2020 218 comments
ShareTweetWhatsappPinterestRedditTumblrMailFlipboard 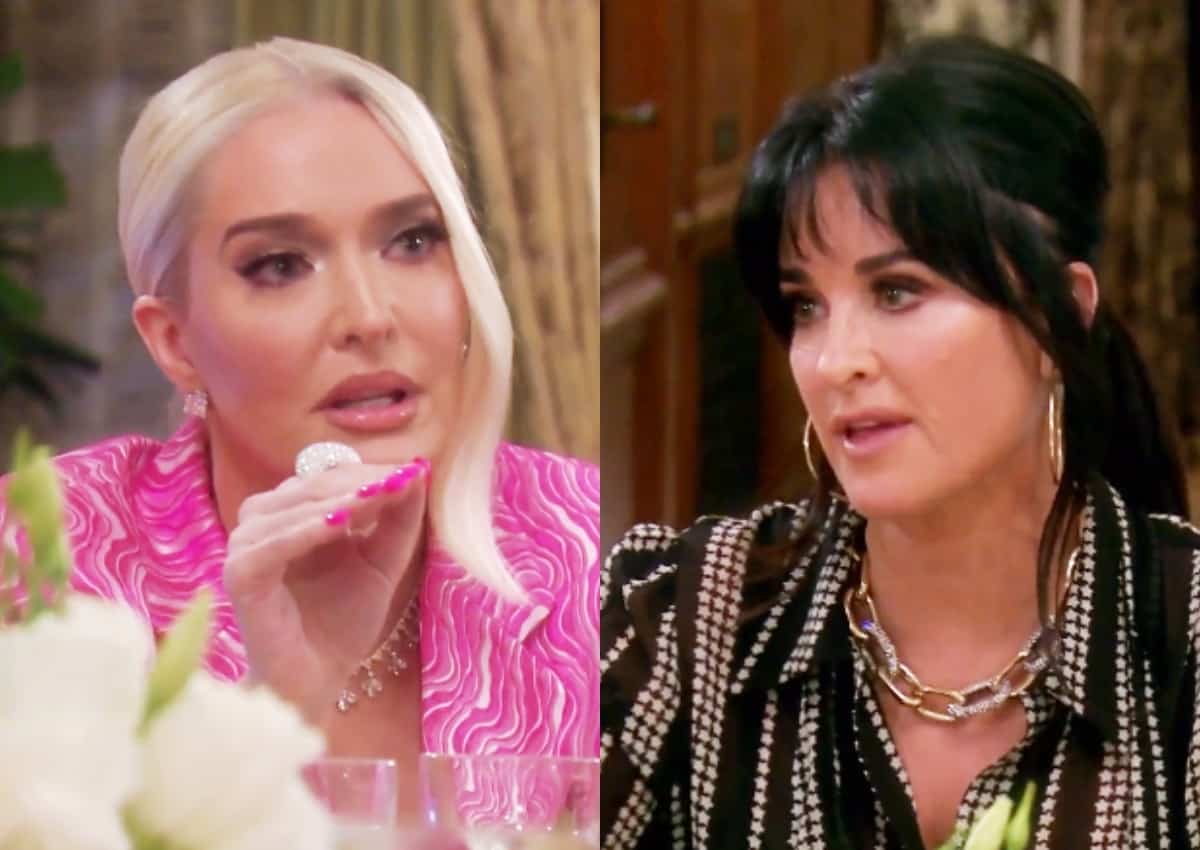 Friendships get questioned and personalities get dissected on this episode of the Real Housewives of Beverly Hills.

Garcelle is out with her ride or die (real) girlfriends and they are ready to get their drank on. The ladies talk about dating in Hollywood, divorces, and their dating history. Wait…Garcelle dated Will Smith?! Now THIS is what true friends do…not pick petty fights amongst each other.

Erika calls Kyle and gathers important information about Kyle since Erika has a “freaky good” astrology party planned. When will these women learn that having an astrologer in the middle of this group is a bad idea? They also chat about Denise’s recent behavior, and Kyle claims she is seeing a different side of Denise — a snippier side…that’s for sure.

Over at Denise’s house, she admits that she is struggling with her teenage daughters. Sammi is prepping for her homecoming dance and Denise appears to be having a hard time watching her girl grow up. She admits that she isn’t really as wild and crazy as she portrays. This leaves Kyle and Erika scratching their heads, as they aren’t quite sure which version of Denise they will be getting at any given moment.

In preparation for her role in Chicago, Erika meets with a dance instructor and starts getting to it. I’m not gonna lie, she is picking up the moves pretty fast…must be all that performing as Erika Jayne. She breaks her tough girl demeanor when the cast of Chicago sends her a virtual welcome message, and she begins to cry. Who is this lady and what has she done with Erika Jayne?!

Because Rinna needs the world to know that her husband HarryHamlin (one word) is acting in a play, she compliments his physique and they chat about their two actor household. Ugh. The convo switches to Amelia and her headspace. Rinna explains that being a therapy family helps them deal with all their issues. Must pay a pretty penny for all that therapy…

Dorit, the restaurateur, meets with Robert, the CEO of Buca di Beppo. Dorit explains that this guy is considered family, but Robert is a bit troubled about Dorit’s commitment to the project. He tells Dorit that so far she seems only mildly committed to the whole process. To save Dorit from the hot seat, PK swoops in and changes the subject to LVP, since Robert is a mutual friend of hers. The couple attempts to talk sh*t about LVP, but Robert ain’t playing. He refuses to bite when Dorit and PK “worry” about what LVP may say about Dorit’s foray into the restaurant business… The truth is LVP will just LOL at Dorit…like most people do.

Mauricio must have the munchies again. He barely listens as Kyle whines about her plans for the evening. Sutton calls Kyle and the ladies talk about how uncomfortable Sutton is feeling about being around Dorit at Erika’s upcoming astrology party. BTW: Ew. Kyle dancing for stoned Mauricio makes me want to gag.

On the way to Erika’s, Kyle, Teddi, and Sutton share a car. They worry about Denise’s behavior, but then their worry turns to Teddi’s pregnancy-induced nausea. Now there’s a REAL fear.

Can we discuss the way Erika and her husband, Tom, interact? I love how he always says, “cool,” as if it is something the kids say. When the girls arrive, pink is apparently the color of the evening. Not only are Erika, Garcelle, and Rinna donning too-short pink ensembles, but Erika and Rinna are legit wearing the same exact outfit. You better believe someone in Erika’s glam squad will be fired because of this snafu.

Is Denise on drugs of some sort? Why is she talking so weird when she chats with Tom about her daughter’s homecoming dance? Erika shuffles her husband away from the women the way a mom would do to her five-year-old son. She essentially sends Tom off to bed, and then finally, Shawn, the astrologer arrives.

Shawn starts rambling about signs and moons and jumps right into it with Erika. He calls out the women for what works them up, and when Shawn gets to Denise, he blows up her spot about her hidden side. He discusses how Denise may be calculating and conspiring when she gets worked up and how she just wants to even the score.

When Shawn gets to Rinna, he hits the nail on the head and states that she can’t hold back inner thoughts. Well, duh. It doesn’t take a “gift” to figure that out when it comes to Rinna! He lets Garcelle know she is all about having fun and that Dorit deals with tidal waves of emotions. For Sutton, Shawn explains that she may take things personally when they aren’t always intended to be, and for Teddi, he states that she gravitates to one person who she feels connected to. Interestingly enough, the astrologer gives a fine explanation of why Teddi is attracted more so to Kyle. Kyle loves that their friendship is finally validated, but it is SO strange how and WHY she needs it to be okayed.

Dorit comes out and states that Kyle and Teddi have gone to couple’s therapy and Kyle basically loses it. I am unclear why Kyle gets sooo defensive over her friendship with Teddi and why I didn’t even remember that Teddi was even AT the dinner table, since that was how little she said. Isn’t that interesting? Kyle is legit getting all hot and bothered and Teddi remains mum.

In front of their special guest, Sutton and Dorit begin to unravel. Erika shuts the bickering ladies down and chauffeurs Shawn out the door. Dorit tells Sutton that they are not girlfriends yet, therefore she was concerned about her behavior at Rinna’s daughter’s clothing launch. Sounds like a stretch to me…and a very low blow on Dorit’s part.

Garcelle has no idea what is going on, considering she is hardly around. However, she has no problem letting Kyle know how she feels about her. For starters, Garcelle is irked that Kyle hardly pays attention to anything Garcelle says. Kyle claims she “adores” Garcelle, but Garcelle feels like Kyle just glazes over her. In the words of Garcelle, “these b*tches are so wrapped up in themselves that I can be naked doing cartwheels and she wouldn’t even notice.” Now there’s some real talk! Finally!

When Garcelle, Rinna, and Denise leave in a shared car, the ladies chat about how they cannot get over Kyle’s behavior. They call her out for how ugly her outfit was, how she talks at them, not to them, and how she doesn’t even listen to a word they say if it doesn’t have to do with her. This is all truth. And it’s about damn time someone says it out loud about Kyle.

Meanwhile, back at Erika’s dwindling party, Kyle is still not done with Dorit. She feels the need to defend her totally “normal” friendship with Teddi and yells out, “F*ck you, Dorit… you can’t tell me how to act.” Erika attempts to reel Kyle back into reality and states that her friendship with Teddi is, in fact, a little strange. Kyle snaps back with, “Why is that weird? Because you don’t have good friends?” Boom.

“You’re so out of line! I’m not even going to be insulted by something so wild like that,” Erika fires back. “And I actually do have good friends. And I actually consider you to be one of them.”

Erika considers Kyle as one of her good friends? Que? And with that, I hope Kyle hasn’t made an enemy of Erika…Erika would tear Kyle apart in a heartbeat.