RHONY Recap: Dorinda Calls Ramona a “Coward” After She’s Confronted About Her Behavior

by Elizabeth May 22, 2020 99 comments
ShareTweetWhatsappPinterestRedditTumblrMailFlipboard 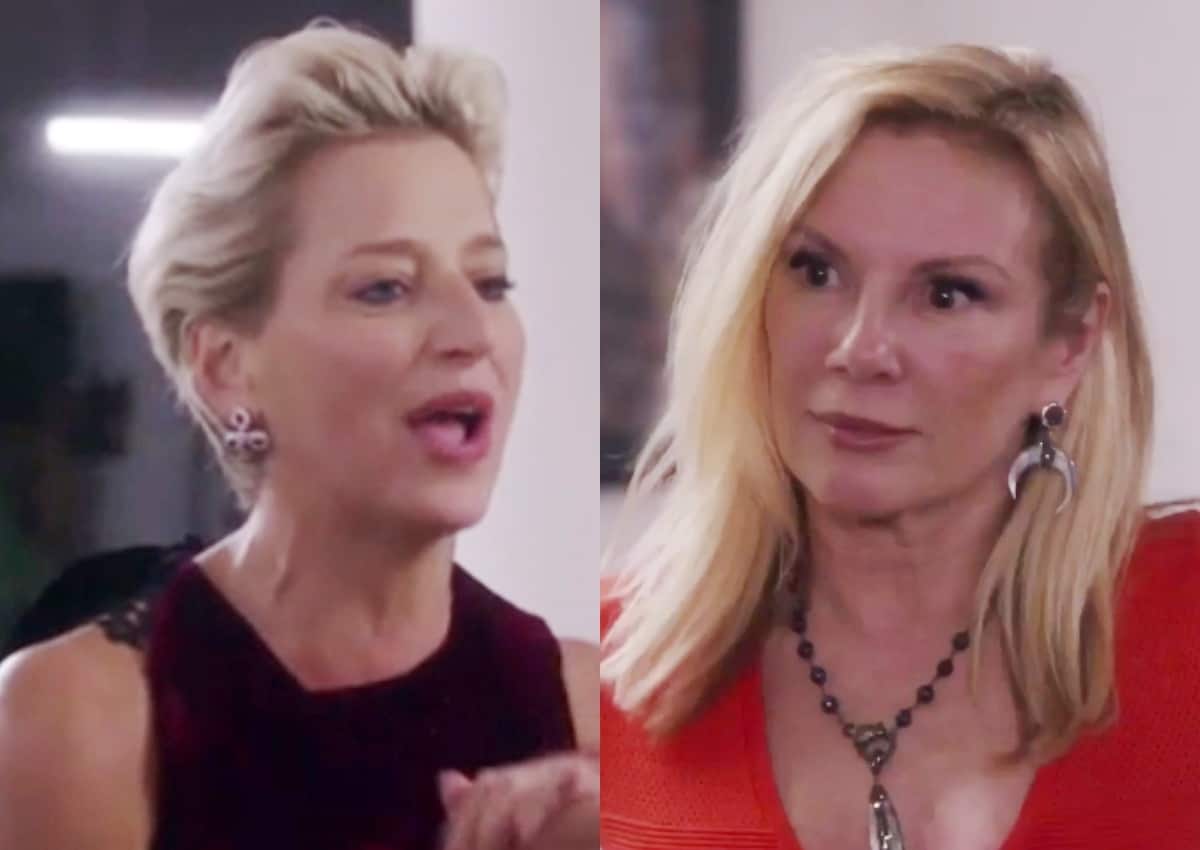 On this week’s episode of the Real Housewives of New York City, will Dorinda face the music and finally get off Tinsley’s jock? We will have to watch and see!

Leah, Luann, and Tinsley meet for lunch. Leah is hacking since she is not feeling well, She thinks the crazy during the orchard trip was basically sickening. Tinsley arrives late and is coughing too? She thinks her voice is gone after defending herself from those cackling hens. Leah suggests an intervention for Dorinda ?

Ramona, Dorinda, and Sonja are attending a workout class together. Ramona always has to brag about how great she looks. Detox that wine, ladies! Dorinda and Ramona worry over Sonja’s excessive drinking. At least Sonja owns her bad behavior. Dorinda thinks Tinsley is a fraud and has a victim complex? Ramona thinks Tinsley is just a kid in a woman’s body. I think neither. Tinsley has lived a debutante life and they just can’t relate to her.

Luann thinks Tins screeching is brain piercing and that is what instigates Dorinda. Leah succinctly surmises that Tinsley is living Dorinda’s best life. Very insightful. She thinks Tins has to “out thug” her. This is such a production manufactured storyline that makes zero sense. Dorinda acts like Tinsley has pissed on her Cheerios, which we never saw happen so this makes no sense!

Dorinda is meeting up with her life coach?  Is she pulling a Nene? He tries to get her to understand everyone has layers and she can co-exist with others . She describes Blue Stone Manor as the “Great Lady,” and being underwater has impacted her greatly. Dorinda is literally drowning in grief. She admits she is still tied to her past. Dorinda shares she broke up with John. She finally admits it was a rebound relationship #progress.

Leah invites the ladies to the Russian bathhouse, which apparently is known as a place that you bring your mistress or strippers to. You have to wear these interesting-looking hats so you don’t mess up your hair. I am always game for any kind of spa treatments. Miss them now so much…

Something called “spicy cow feet soup” is on the menu, which sounds delectable . Once I read that on the menu, I couldn’t go any further down on the menu. I miss going out to eat during all of this, but I am living vicariously through my housewives! Sorry, I digress!

Tinsley refuses to remove her jewelry even though it is recommended you do so. She has to maintain that princess exterior at all times. You know Prince Charming might arrive with the glass slipper at any time! Tinsley does live in some sort of reality and will participate in the Russian vodka, though.

Dorinda associates going downtown to business transactions.  She thinks even the look is gloomier there. Dorinda sees only gloom and doom right now. Luann rides with her to the bathhouse. They, of course, have to discuss Tinsley and how she is living in a fantasy world.  I just don’t get why that would bother someone. Is it more fun to hang out with someone who is miserable all the time? No thanks. Let her have her fairy godmother and pixie dust and let it go. Did you like all of my Disney references?

Ramona arrives and willingly gives up her Cartier watch . She thinks the spa is just like Leah — basically rustic . Ramona talks about how beautiful her decollate is and how wrinkled Sonja’s is. She is really full of herself more than normal this episode.

Dorinda and Luann arrive and find this place to be a little shady. They note there is a strip club close by just in case you are interested. I have to say Leah and Luann have amazing bodies. They discuss their boobs in the sauna and feel each other up. Is this a thing on all of the Housewives? Boob fondling?  Ramona and Sonja do look like Tweedle Dee and Tweedle Dum in their hats giggling like school girls.

They have the leaf treatment called Platza, which aids circulation. Luann is into being beaten up by leaves by some hot guys. Leah looks phenomenal and is in great shape.  Sonja gets an S&M feel from her masseuse and it kind of turns her on. Tinsley isn’t interested in the process. She claims her allergies prohibit her from doing this. I think she doesn’t want to mess up her makeup lying face-down on a table.

Leah suggests a foot scrub lying face down. Count me in, very relaxing. Dorinda isn’t interested since she got pregnant last time she fell for that! I have never had that worked into any foreplay before? True confession: I would have been game!

The ladies have lunch in the spa. Leah makes a nice toast thanking them for trying this different experience. She needs to clear the air and wants to discuss the orchard trip. She is troubled by all of the fighting. Ramona, in her true form, thinks you just plan another trip to Newport, RI. Just keep moving…

Leah thinks before you plan another trip you recognize bad behavior. Dorinda will acknowledge it but what does that mean? You acknowledge you acted like an a** hat? It is pretty bad that Ramona has to tell Dorinda she keeps going for the jugular . Production shows a montage of Dorinda’s finer a**hole moments. Dorinda throws a boomerang and tells Ramona she is like a vampire who sucks the life out of others. Truth.

Leah has a bond with Dorinda. She is afraid to piss her off and then she will end up like Tinsley. Dorinda, in true form again, shifts the focus to how Ramona behaves. SIGH. Tinsley and Dorinda basically agree to a cease-fire for now.

Sonja is relieved that it didn’t escalate. This is a Russian place after all and she is confident some bad sh**  has gone down here before.

We meet Leah’s sister Sarah. They are very close and connected at the hip. Sarah is Leah on steroids. Now that should be interesting.

Leah shares she is dating a “pita chip” guy who owns a kosher restaurant. She sent him a racy photo and he forwarded it back to her by accident.  He had intended to send it to someone else? She likes being the beauty and dating a beast in the relationship. Now that is bizarre. Leah did makeup with her mom but it is still not perfect. Sarah thinks Leah is behaving the same dysfunctional way she did when she was an unruly teen. There could be some truth to that.

Ramona invites her girlfriends and Dorinda, Sonja, and Elyse over to her apartment. Elyse wants to do a condom check on Ramona’s nightstand drawer. She is not falling for her innocent Catholic girl routine. Ramona claims guys need three condoms when they hang out with her. Hmm, sure they do, Ramona. I would suspect it would be more like erectile dysfunction issues and they have to keep wrapping it up!

Sonja arrives holding down the door buzzer.  She brings a dress that is much larger that will fit Ramona. Shady, I love it! Ramona greets Dorinda at the door and is hopeful they will be okay after the bathhouse experience. Sonja is getting fat-shamed by Ramona. Not nice, Ramona, just because you couldn’t fit into a medium dress!

I think Dorinda just flipped a nasty switch! Here we go! Dorinda is upset with Ramona and how she shamed her over her nasty behavior. We might hear clip, clip, clip again! She claims Ramona Schnefraude’s people! This means you don’t wish someone ill but if bad things happen you get pleasure from it. That is most definitely not a compliment but pretty spot on!

Ramona and Dorinda go at it! She tells Ramona she is no better because she insulted Sonja’s weight. Dorinda calls Ramona a “coward.” They both go really low with their “I am sorry’s.” They are basically saying sorry for everything they hate about each other. Dorinda walks out and has had enough.

The fight goes out into the hallway. Ramona chases Dorinda down and they have a drunken babbling spat.  They decide to bring the kooky behavior back inside ! Dorinda, honey, pull yourself together before you lose all of your friends . They hug it out for now, but there are some unresolved issues here.