Home Real Housewives of Beverly Hills News RHOBH Recap: Denise Storms Off After Being Mom-Shamed in Front of the Group as Aaron Gets Involved

RHOBH Recap: Denise Storms Off After Being Mom-Shamed in Front of the Group as Aaron Gets Involved 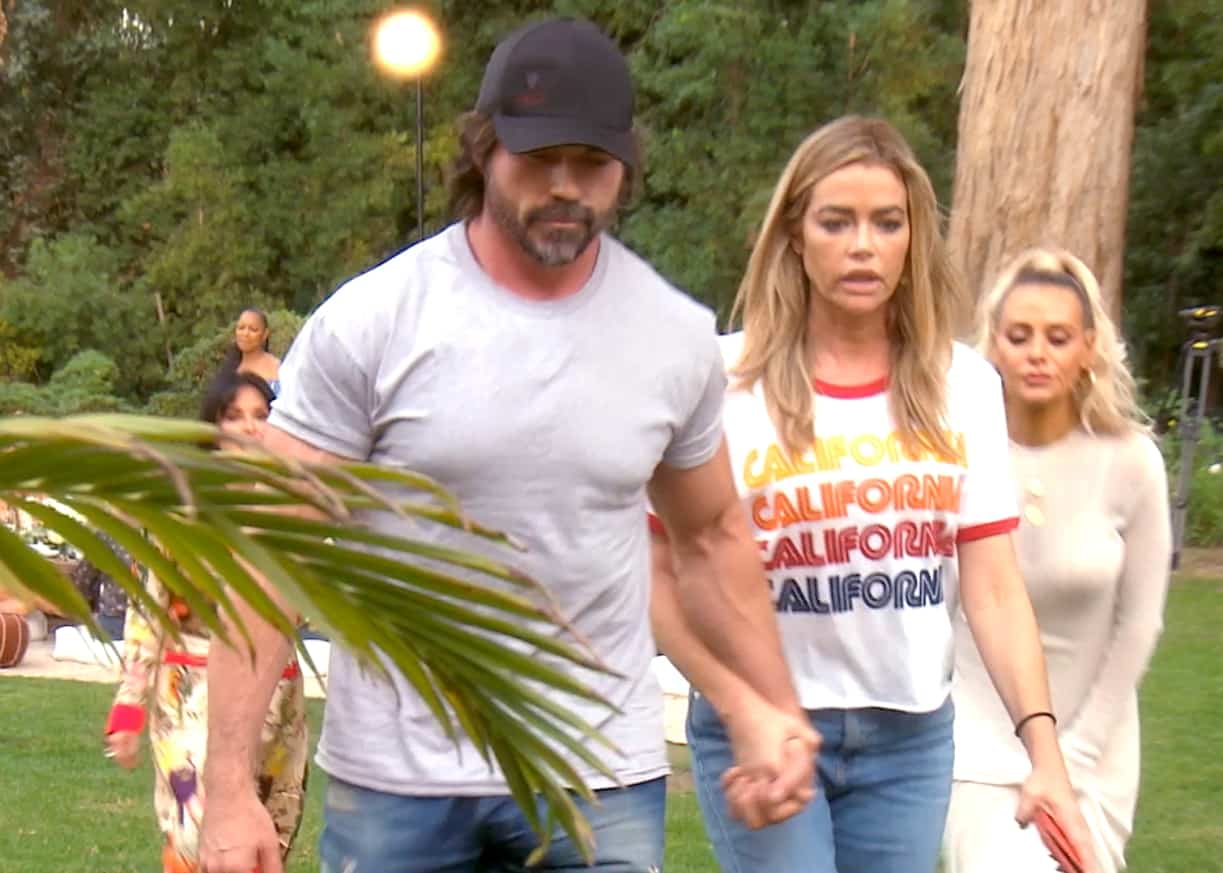 Last season it was puppy-gate. Now it’s threesomes and mom-shaming on this episode of the Real Housewives of Beverly Hills.

What was with that bizarre Kyle intro at the start of the show? Let’s just hop right into the good stuff, like Garcelle being honored for her work for the LA Mission.

Rinna and Garcelle catch up on the way to the event. We hear again about Santa Barbara and the Denise debacle. Rinna justifies her conversation with Denise about threesomes, but it is clear Rinna does not know her audience. Garcelle is #teamDenise, but really, she is just #teamYouGirlsAreBeingStupidAboutThis.

Garcelle states, “I totally understand why Denise thinks this is inappropriate” to loudly discuss threesomes in front of her children and their friends. She explains that Denise was talking about happy endings and giant penises with an all-adult crowd. It is not that hard to comprehend. That’s adult talk. With adults. No. Children. Present.

The women join Garcelle and Rinna at the event. They all look a bit overdressed for the event if you ask me. Particularly Erika. Perhaps she should tuck those bad boys away?

Garcelle gets introduced, honored, and she begins her speech. In her confessional, she talks about her eldest son, Oliver. She explains that he got caught up in drugs and that she used her time at the LA Mission to help herself cope with the dark times with him. It’s a touching speech until the final words are said. Garcelle throws shade at the end of her speech when she addresses, “My new best friends…some of them not so much.” Garcelle makes eye contact with Kyle at that very moment and Kyle catches the dig, but Kyle is so far up her own a*s that she didn’t even know she HAD issues with Garcelle.

(Notice how Kyle had to take a chance to show off her shoes. She is such an attention whore!)

I love how Denise removes herself from the bullsh*t because she has bigger fish to fry. She says goodbye early, as she has to be up for work at 6 a.m. Kyle sees it as Denise fleeing and escaping the inevitable confrontation. Kyle further states, “Honestly, we all have to f*cking be somewhere.” Oh, Kyle, save it and your displaced Denise anger.

Garcelle makes her way over to the group and the conversation turns to Santa Barbara. Garcelle prods to find out if any of the issues were resolved. Rinna, the psychoanalyst, believes that Denise is trying to make up for her sexual comments last year and is thus attempting to be mother of the year now. Rinna further states that she thinks Denise feels guilty about what she said in the past. The ladies then discuss whether they are bad mothers. Funny enough, Denise never called them bad moms…so who has the guilty conscience now?

Kudos to Garcelle for diving right in. She lets Kyle know that she feels as though she simply glazes over her. However, in Kyle’s defense, Garcelle really has not spent a whole lot of time with the group. Kyle, of course, disagrees and attempts to trip Garcelle up by asking if she knows anything about HER.

Denise then tells Aaron that Rinna called her a hypocrite. She is baffled and surprised that these low blows came from Rinna of all people in the group. Denise begs Aaron to attend Kyle’s barbecue, although I am not sure why she would even want to surround herself with that group.

It’s the day of Kyle’s barbecue and she is running around trying to get everything together. For a minute I was waiting for Kyle to get out of her jammies and get dressed, but alas, I realize that is her lewk for the party. Interestingly enough, Garcelle and her boys are the first to arrive and Kyle is less than thrilled to have to entertain her alone…

Slowly, they all trickle in. I have to LOL when Sutton explains that she met her boyfriend, Michael, on Match.com and that she was scared she would get sold into sex slavery.

One question keeps popping into my head while I watch this barbecue unfold: where IS Kyle’s family at her family barbecue? Speaking of families, Denise has decided to take a hard stand and not bring her kids along to the party. I don’t blame her one bit. I mean, didn’t the other women suggest not having the kids around when they are chatting? Now it’s time for Denise to put that plan into effect.

That was nice of Aaron to bring over an EMF bag. Whatever the f that is…? Kyle looks perplexed, but mainly because you know she wasn’t listening to Aaron’s explanation cuz Kyle doesn’t listen to anyone but herself.

Once seated for the meal, Denise whispers to Garcelle that she purposely did not bring her kids along, and then states, “I got the note that the kids should not be in earshot of us” when some of the ladies question Denise’s absent children. Kyle is perplexed and feels like that is a slap in her face. Denise justifies her decision based on the current climate of events that have recently unfolded.

Garcelle jumps to Denise’s defense because DENISE IS RIGHT. Parenting is personal, so let Denise handle it with her kids. Teddi won’t get off of this “making the rest of the group look bad” schtick, and to be honest, we all know she is only speaking up now to protect her bestie, Kyle. I don’t think Denise wants to be coached, Ms. Accountability, so save your speech for your next retreat.

I always wonder why the husbands don’t get involved when they see their wives getting torn apart, and I gotta tell ya, I was applauding Aaron this episode. He jumps right to Denise’s side and demands to know what the issue is. He attempts to talk logically and calmly to this bunch, but between Kyle’s piercing eyes and Teddi’s stupid comments, he isn’t getting anywhere.

One of Kyle’s random friends butts in and states what has been said before: Denise’s kids probably already know what threesomes are. Maybe the kids DO know what they are, but that doesn’t necessarily mean it’s okay for their mother and her friends to be openly chatting about it in front of them.

Aaron shuts down the conversation, which in turn p*sses Erika and Teddi off. Kyle reminds Aaron that “women handle things differently than men.” But, Kyle, this shouldn’t be a fight. Aaron is dropping truth bombs all over these women. Kyle, as always, is not listening and is more worried about the mom-shaming that is occurring, although the only mom-shaming that is happening is to Denise! WHY IS DENISE BEING MOM-SHAMED?!

Denise gets so fed up that she loses it in front of Dorit’s daughter and she drops an F-bomb or two. Teddi jumps at the opportunity to call Denise a hypocrite…yet again. Denise points her finger at Teddi and calls her a sh*t stirrer. And then Denise makes an executive decision to remove herself and Aaron from the situation. To Aaron she says, “Stand up, we’re leaving. Get up.” That’s how you talk to the man who just defended you?

As Denise storms out and repeats over and over for Aaron not to speak, he retorts, under his breath, “Don’t tell me what to say. I’ll crush your f*cking hand.” Um, what?! Kyle calls Denise’s exit silly and feels bad about Denise leaving cuz “this is her house.” Not cuz Kyle may have hurt Denise’s feelings. Interesting that Kyle has a hard time with Denise leaving considering she is always the first one to run away from issues. To be continued…