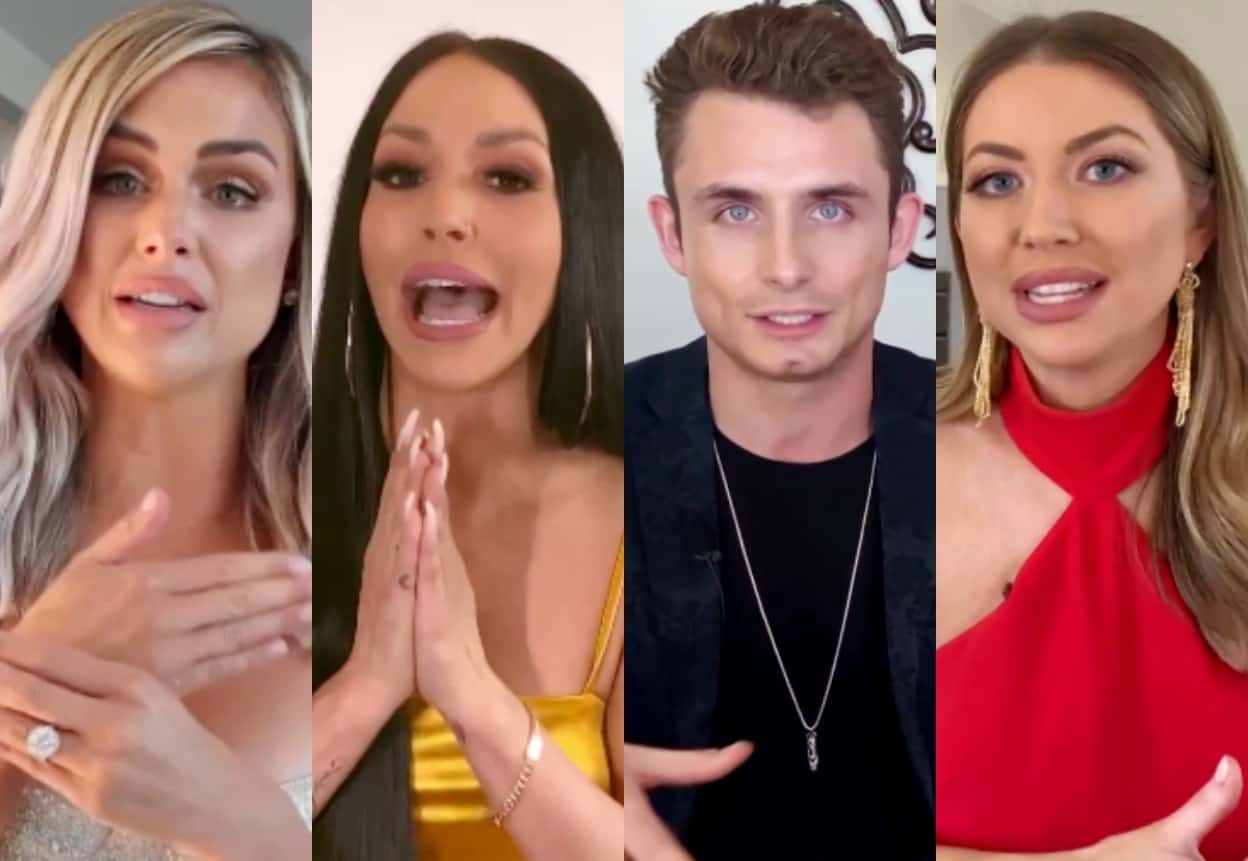 Looks like it will be Stassi, Kristen, Max, and Brett’s last ever Vanderpump Rules season. The firing bombshell was dropped yesterday before the reunion aired, making it quite uncomfortable for viewers knowing that a big chunk of the cast has been fired…

In case you forgot, Sandoval has been letting it rip on Jax. He is handing Jax his a*s and reminding him that the world does not revolve around Jax Taylor. All of the yelling causes Andy Cohen to mute everyone’s favorite couple, Jax and Brittany, and it’s the most pleasant 10 seconds of this reunion thus far. Sandoval begs Jax to better himself, but it doesn’t seem like Jax is understanding his recommendation.

Apparently, Scheana has been fed up with being the nice girl and made it clear she was not interested in making new friends. Her target? Dayna and her lack of a bra. Everyone knows Scheana is just p*ssed Dayna is getting male attention, but she tries to spin it. How ‘bout LaLa shutting Charli down for her accusations of bullying?

Regarding the Scheana and Max Palm Springs trip…Max explains that despite his (at the time) situation with Dayna, things, “for the most part,” stayed in the friend zone with Scheana. Like, what does that even mean?! We come to find out that Max stopped Scheana “mid-blow-job” (whatta guy). How awkward that Scheana is talking with no shame about this while her new boo is def in the other room. I love how Scheana justifies her BJ with Max as “comfortable,” because ya know, they’re probably best friends…

Peep LaLa crying as she views James’ season reel. Watching his journey makes everyone emotional…even Ariana sheds a tear or two. Katie shares that she is proud of the sober James and Stassi explains that she is happy Raquel has the chance to be with a better, sober boyfriend. James is celebrating 10 months of sobriety (impressive in and of itself, but doubly impressive during quarantine!) and he thanks Raquel for saving him. He should also thank LVP for giving him 132907982325 chances.

Kristen, on the other hand, shakes her head and has a stank face on as James talks about healing and becoming a better person. No one feeds into Kristen’s negativity and she continues bickering even though she said she would say nothing to James about James. Typical.

WHY IS SANDOVAL PLAYING THE TRUMPET?! And congratulations to Ariana for shutting it down just as fast as Sandoval randomly picked it up.

James has proven he is “enough without the drink” and LaLa cheers loudly as if to remind the cast that she, too, is sober. LaLa is a year and a half sober, but she was still an a*shole this season. When asked about the 50 cent meme, LaLa explains that things got very bad and she didn’t appreciate James making fun of the situation. LaLa further states that because of legal stuff, it wasn’t filmed. She also doesn’t call 50 by name…as if we don’t all already know who she is talking about.

LaLa was a jerk to many of the girls, including Raquel — remember that fight where LaLa starts calling herself different dog breeds and everyone is completely confused?! LaLa is getting called out for all of her hateful words this season. Hilarious how she made fun of Scheana for wearing a crop top whennnnn LaLa’s sporting one for the reunion. Heyo! Stassi whispers that LaLa may be bipolar and then yells out, “I’m a nice girl!” when Scheana questions their friendship. Oh man. Everyone just silently stares at Stassi after she says that and it’s as if they KNOW she is about to get fired in the near future.

Everyone’s quarantine journey seemed pretty “on-brand,” except of course LVP. Watching her fold laundry and clean the floor made me connect with her on such a deeper level…

In other news, Kristen shares she has a new boyfriend named Alex. They have only been dating a month and a half, but they are quarantining together. Whoa. She certainly moved on fast after Max…er, I mean Carter.

LOL to Jax caught in yet another lie. For a guy who isn’t that into strip clubs, he seemed to have a FINE time. What the heck would he be like if he actually enjoyed strip clubs?!

When asked about all of Sandoval’s best man efforts, Jax believes that they are all for show. LVP has to step in and remind Jax that Sandoval is truly a great friend. Sandoval calls BS on Jax and explains that doing those nice things really makes him happy. Everyone, except Kristen (naturally) agrees and defends Sandoval. Jax says that Sandoval is simply acting like a good friend and that’s when Ariana jumps in and yells, “If he was that good of an actor he wouldn’t be on Vanderpump F*cking Rules.” LOLOL.

Love the cowbells from outside Andy’s window for the healthcare workers of NYC at 7:00. Thanks for giving us something to cheer about with this reunion. Speaking of something great…How great of the Toms for raising over $50,000 for their TomTom employees by making fun Cameo videos? Schwartzie actually has a fire under his butt and wants to work! Remember when he couldn’t even handle bartending?!

Sigh. I wish we could mute Brett. He feels like his niceness gave Scheana the wrong idea. Scheana lets Brett have it, particularly when he throws her under the bus. He reminds Scheana that she asked him to “pretend like we might have a future together” and claims he is not making this up. Brett, backed in a corner after Danica jumps to Scheana’s defense, states, “I know you all have waited for this reunion to clamp down on the new people.” No, Brett. I think they are just calling you out for your sh*tty behavior. And BTW: 34 is NOT middle-aged, Brett. For a 32-year-old dude, you better watch what you say, old man!

The Witches of WeHo have been falling apart all season (and now they are 100% dismantled). Kristen wanted Stassi and Katie’s help to guide her through her Carter woes, but Stassi and Katie were getting tired of the same old story.

What’s with Kristen’s double middle fingers?! Clearly Kristen is just frustrated that her friends became exhausted over the Carter conversations. Katie tries to talk calmly to Kristen and she explains that she hurt every time Kristen hurt from Carter. Stassi states that Kristen asked for help to be honest and open about her relationship with Carter. The friendship and trust deteriorated when Kristen refused to stay honest.

LOL to LaLa confronting Carter this season for not contributing financially in the relationship with Kristen. LaLa, the one who openly admits to sucking Randall (literally and figuratively) dry of his luxuries, justifies it by saying Kristen wasn’t even happy in the relationship. That’s a head-scratcher. Despite all of the dramatics, everyone can admit they are happy Kristen has found love with a new man.

Andy asks James for his input on how Katie and Stassi have treated Kristen. James explains that all of Kristen’s friends are “doing it” and escalating in their lives. Ouch. Kristen feels the most upset about being left out of Stassi and Beau’s engagement, but Stassi is just fed up with Kristen’s antics. I mean, Stassi even went as far as comparing herself to Beyonce leaving Destiny’s Child. Not sure Beyonce would appreciate the shout out right now given Stassi’s recent issues… But, according to Stassi, “If you do not think you are the Beyonce of your own life, then what the f*ck are you doing?” Stassi explains that if her wedding were tomorrow, she isn’t too sure if she would invite Kristen… Part 3 of the reunion airs next week.